As we have stated previously, we intend to publish quarterly schedule updates for our monthly releases. Even though the goals outlined in these schedules are likely to change somewhat as we react to feedback, we feel it is important to periodically provide you with an updated roadmap.

Our priority continues to be to deliver new content to our backers each and every month so that you can give us feedback that will help us iteratively improve Shroud of the Avatar. This collaborative process continues to benefit the game, and often results in sweeping changes such as the upcoming addition of the Outskirts scenes. As you have seen in previous releases, the flexibility inherent to this process means that we sometimes push things out, but we also often pull new things in. 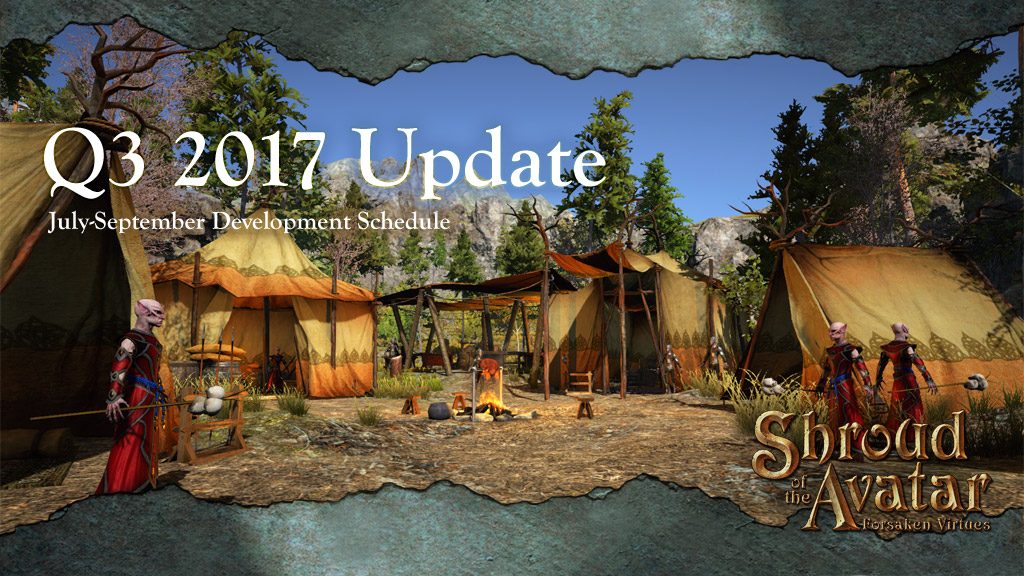 Performance: One of our biggest priorities for the third quarter will be to improve performance. A significant portion of each release will be spent on improving client stability, framerate, memory usage, and load times.

New User Experience (NUE): Another large priority for the third quarter will continue to be about improving the new user experience. These efforts will include adding the final two Outskirts maps and polishing the User Interface.

Story Complete: Our goal is to complete the story no later than the end of Q3 (most of it will actually be done in R44 minus one Outskirts map), so story efforts in Q3 will be focused on finishing the Path of the Oracle (aka the finale) as well as polishing the paths of Truth and Courage (including adding side quests along those two paths), and refining the last two Outskirts map. Since the story will be complete in Q3, we plan to allow all players to make a one-time-only reset of the story status for their character (so they can start fresh with their current character) at some point during Q3.

To repeat what I said in the Q1 post:

“We believe that we have reached the final 20% of development before Commercial Release, at which point we will transition out of Early Access. The next two quarters will be the most exciting and challenging times for the project so far. This will be when we get the final features and content in the game and make the last important balance changes. The changes will be fast and furious, and they may occasionally be hard to understand when you become accustomed to the way things were before. Please trust that we firmly believe that every change we make is best for the long term health of the project.”

As always, all dates, durations, and deliverables are subject to change as we adjust our designs based on direct feedback from you, our backers.

We continue to be incredibly thankful for the support we receive from this amazing community. While the funding you provide makes all of this possible, it pales in comparison with the faith you have in us, the feedback you provide us, and the content you are making for everyone to enjoy. We are humbly grateful, and we cannot wait to see you again in New Britannia!

Before I go, I wanted to include an excerpt from my original post about our Early Release Schedule that is important to set the framework for our ongoing schedule:

As a crowd funded and crowd sourced project, we feel it is incredibly important that we provide our backers with information and access well before game studios would normally do so in a traditional development model. Traditionally, the players are given information and access only after the development team has already decided exactly how things will be done, and at times, even after it has already been implemented. By the time the public normally has access to the product, there is usually no time to meaningfully react to the public feedback. Shroud of the Avatar is different than the traditional model, as we intend to offer our backers extremely early access to information and even the game itself.

Our strategy over the next few months is to provide you with focused and iterative releases of content. Your feedback during these releases will be critical to making the final product the best it can be, and we appreciate that you are all so willing to devote your time to helping us.

It is important to note that all dates, durations, and deliverables are subject to change.