Meet the Shroud of the Avatar Development Team 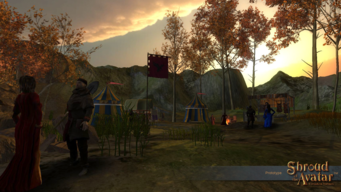 This scene started from conversations with Richard about the gypsies who will live in this world. A very early first pass resulted in a large camp where many gypsies lived and sold their wares.  Richard felt that this didn’t quite match what he had in mind for this. Instead he had envisioned a much smaller, temporary encampment, possibly even a single gypsy family.

Once I started to visualize the scene in that way, ideas came to mind much quicker and more easily. This is a family that would almost certainly come under siege by a small group of monsters, they probably don’t have much in the way of money, and they probably had their own family issues to worry about.

We settled on two stories to represent here, one “local” and one “global.” Locally, the family comes under ambush from a pack of skeletons just as the hero arrives. This is a nice, quick little piece of gameplay that leaves the player feeling a sense of reward and accomplishment.

On the “global” scale, one of these gypsies has a wedding ring and offers it to the player as a reward for helping.  On the surface, this appears to be an easy, extra reward for the player, but there is actually a great deal more happening here.  The player has found himself or herself  in an ethical dilemma, and that’s only apparent once the player has explored more of the world and uncovered more of the ongoing story. In this very organic way, quests can have both a long term and immediate consequence for players, and represents much of what questing means in a “Richard Garriott RPG”.

Shroud of the Avatar Developer

Starting with Ultima III, Ultimas regularly simulated multiplayer, by providing you an artificial Non Player Character party of friends to “share” the experience with. {Trivia: Ultima III’s working title was Ultima 3D/4P, for 3D dungeons, and a party of 4 Players (all run by the one real person at the keyboard)} True multiplayer connectivity and richly detailed and varying interconnected roles were the chief contributions of Ultima Online! Multiplayer was a great boon to game play and popularity, but a great challenge from storytelling standpoint. Multiplayer is desirable and very challenging in any “Ultimate RPG”. END_OF_DOCUMENT_TOKEN_TO_BE_REPLACED

With Ultima IV I began my first strong effort to craft a unique world not drawn on movies, books or other games to the degree I had in my previous work. Thus the first incarnation of Britannia was born. Originality in world craft became an important element to my designs, as did the social and virtuous context of the stories found within the game. I became a student of story craft and the works of Joseph Campbell. Living and playing through detailed realistic worlds with stories about virtue and social issues, became the central essence of my “Ultimate RPG”. END_OF_DOCUMENT_TOKEN_TO_BE_REPLACED

Ultimas I, II & III – Learning to craft a game and a world

With the success of Akalabeth, I decided to start fresh with my first work intending it for public consumption. I began a game originally entitled Ultimatum! Built on much the same code base as Akalabeth, It continued to refine the Richard Garriott virtual world building techniques. The game maps were largely based on the D&D worlds I created called Sosaria. When finished we launched it under the name Ultima. The tile graphic world, would become common and a useful tool in Ultimas to facilitate the detailed world interactions where you could touch and interact with everything you saw, not just the monsters, that were pivotal to my design philosophy. Detailed world interactions are part of the essence of “Ultimate RPG”. END_OF_DOCUMENT_TOKEN_TO_BE_REPLACED

We promised that when we hit the halfway point of our Kickstarter goal, we would post an exclusive Video Interview with Iolo, the beloved Bard, and Companion of the Avatar from the Ultima Series.  Here it is!

Lord British here!  Welcome to my vision of the “Ultimate” Role Playing Game.  In this 4-part blog, I will share my insights into what makes a great role playing game by reflecting on the past and looking towards the future.  So, without further delay, we will begin where many great stories do, in a Kingdom long ago.

It begins before personal computers

I was attempting to make the “Ultimate” Role Playing Game before they were called Ultima and will continue long after they have been called Ultima.

I began my pursuit of creating the “Ultimate” Role Playing Game (Ultimate RPG) around 1974 while in high school. It’s been 36 years but it feels like yesterday. 1974 was an auspicious year for me. In 1974 my sister in law gave me a copy of The Lord of the Rings, the first fantasy fiction I had ever read, and I was instantly hooked. Soon after, I was introduced to Dungeons & Dragons which had just been released. I quickly built one of the earliest and largest gaming groups which brought together 30-100 people most every Friday and Saturday for all night gaming sessions in many rooms throughout my parent’s home in Houston.  END_OF_DOCUMENT_TOKEN_TO_BE_REPLACED

shroud of the avatar R89 welcome to the weekend