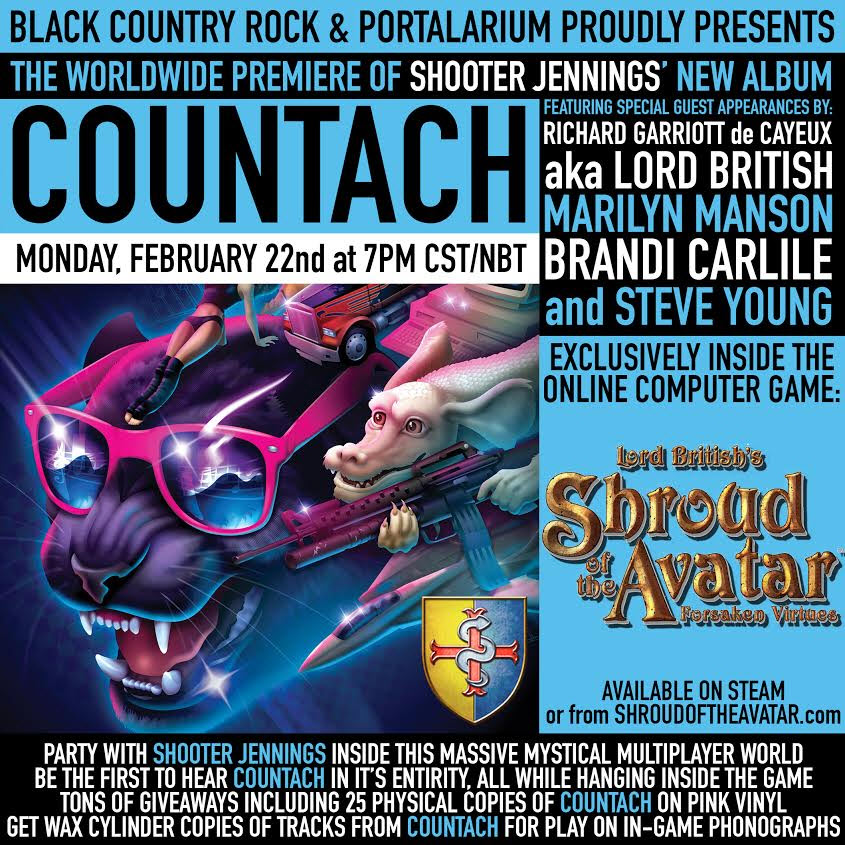 You are invited to the Ultimate Album Premier of the Decade!

Groups from around New Britannia are joining forces to bring you the party you will never forget!

Join us in-game for events: quests, parties, and a world premier first time listen of the entire album

Party goers will assemble at 7 pm CT (GMT -06:00) at the Bear Tavern in the player town of Beran’s Reach on the western coast of Spindrift Bay (or /zone Balec deCani).

The event will be broadcast live on Avatars Radio (http://avatarsradio.info/)
With live video streaming by RizeUp Gaming (http://www.twitch.tv/rizeupgaming)

Shooter Jennings – For the opportunity to bring you this party!
Amber Raine – For co-sponsoring and broadcasting the event on Avatars Radio
Gabriel Nightshadow, Elgarion De Kahli, Asclepius & NBTT – For the performances and quests
Minerva, Aimend, Athanil et Team – For decorating the multiple event locations
Kazyn Phoenixfyre, Eclipse Maiden, RizeUp Gaming – for live video streaming on Twitch.tv
Duke Violation & OoV – For coordinating event security
The Bear Tavern – For hosting the kickoff party
Wake Up New Britannia – The Pre-show on Avatars Radio!
Speck – For nurturing the idea to fruition!
(…and many, many others)


IF you only plan to attend one party in Shroud of the Avatar this month,
THIS is the party you do not want to miss! 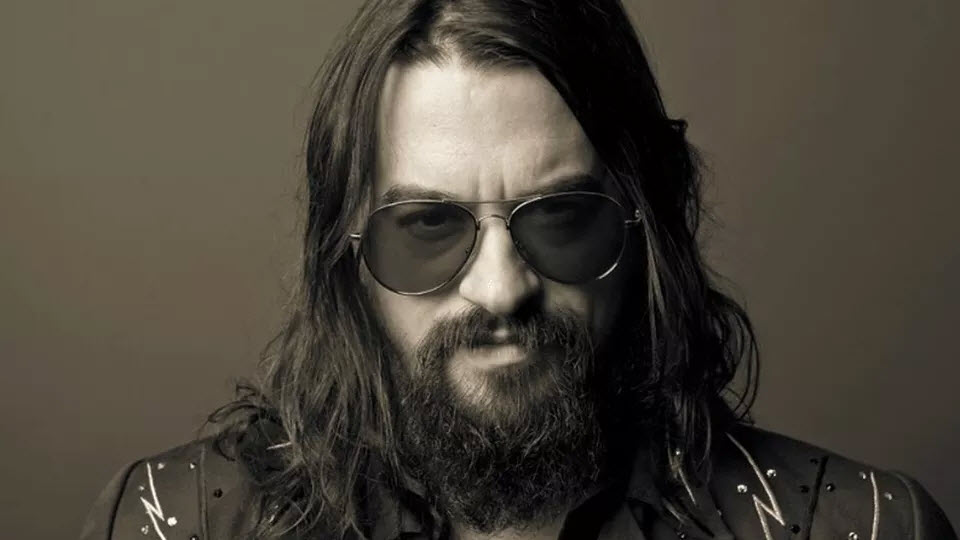 In Shooter’s Own Words…

When news recently got out that outlaw country musician Shooter Jennings, son of the country music icons Waylon Jennings and Jessi Colter, planned to hold the World Premier of his new album, Countach, inside of the fantasy role-playing game Shroud of the Avatar, one news outlet dubbed it “…arguably the weirdest gaming event of all time.”

When asked why he chose such a unique venue to unveil his latest album, this is what he had to say:

As I’ve gotten older I’ve realized I’m a man of familiar comforts. I often find true happiness in the delights of my childhood. But, I find myself trying to give back to the things that gave me such happiness as a kid. When I was 7 years old, my dad bought the family an Apple IIe. Just the sheer possibilities blew my mind and the computer quickly became my favorite tool. The greatest tool.

It was with this computer that my imagination was captured and taken to great heights. Early computer games were, and still remain my favorites. The games Sierra made, Broderbund, all these early titles held a very special place in my heart. But it was with the Ultima series that I found a different kind of kinship. I would have to say, I tinkered a bit on the first few games, but when Ultima V and VI came along I was ready for their epic challenges. Lord British was my J.R.R Tolkien, giving me my first broad magical adventure where morality and intellect really played a major role.

As I got older I played every single Ultima game that was released, even poisoning the bread in Ultima IX. Then Ultima Online took me and my friends to another world, allowing us to live a real alternate life. What a brilliant development!

By this time Kurt Cobain was minutes from death and my 386 sat on a small table in my bedroom. I was running a BBS and connecting to very early forms of the internet. Nine Inch Nails’ the Downward Spiral had captured my ears, changing my perceptions of music forever.

It was with these computers that I began to make music. I understood computers, but up until my discovery of Trent Reznor, I had not found a link between music and computers that resonated with me. After this point I began recording my own songs at home, learning and crafting, crafting and learning. It was a cathartic experience that eventually led me to move to Los Angeles to pursue a career in rock and roll full time.

I spent a lot of time drinking, and going out. Trying to out-Bukowski Bukowski, I guess. I kinda put my years of computing at bay, performing with my band on the Sunset Strip, and trying to make up for all the lost nerd years with the ladies. But I kept a copy of Ultima IX on my machine in my first LA bedroom. Every once in a while, my friend John Shahan and I would revisit Britannia and beat the game again. It was like a warm blanket I brought from my childhood home. When being an adult got to be too much, I could always go poison Lord British’s loaf of bread and get a laugh.

All of this leads to a certain point. I remember looking online and reading about Shroud of the Avatar and getting very excited. It had been a long time since I’d heard the name Lord British, and it was like John Lennon all of a sudden coming out with a new Plastic Ono Band album. I immediately found the Kickstarter and made my pledge. I could not wait to play this game. I had played some of the other MMOs, and while fun, they never captured the sense of adventure that the Ultima series did, online or offline. I was so excited to see this come out that I just could not wait.

After jumping in SOTA, in a very early release, I got very excited for the potential. It felt like UO, but also felt like a wide open adventure unlike anything I’d ever seen. Over the months, I would check in release-to-release as the game started to take major shape. I was inspired by the fact that they allowed players to be a part of the game as it was built. It felt like I was a part of something really special.

Fast forward about a year, and I found Richard Garriott on twitter. I reached out to him, mainly because I was a fan. I thought SOTA was amazing and I think I initially offered to help with score. It has always been a dream of mine to score a game, and I never got that opportunity (well, until I eventually got to put some music in SOTA!). Lord British himself wrote me back and I was just floored. I would keep in touch here and there by retweeting or talking about Ultima games. It was easy, they meant that much to me.

Fast forward again and I’m half way through the recording of my new album ‘Countach’. I was recording the song ‘Chase’. The song, originally from the Midnight Express film, was also used as a theme song for my favorite radio program, Coast to Coast AM. As a kid, I would listen to Art Bell explore the unknown every night with this song as the backdrop. I knew this had to be on the album but I wanted to make it more than just an instrumental. That’s when the idea hit me to ask Richard Garriott to do a voice-over. Here I was doing this record, a tribute to Giorgio Moroder, a man who basically took electronic tools that most people didn’t even understand yet and made wild, lush adventures for people to forget their troubles to. Sounded just like Lord British, so I felt if I just could get Richard talking about his life, exploring, creating worlds, it would make absolute sense. And it did. I was floored when he did it. It was a dream come true.

After we got done with the record, I got to meet Richard Garriott and Starr Long in Los Angeles, and found myself among folks that I really felt I could have a deep conversation with. Again, going back to feeding back into my childhood, I realize that we are all the most responsible for what we have learned from life, and for giving it back to the rest of the world. Much as Richard and Starr have done the same by creating the worlds they have, they gave it back to me. And then through my love of their art, I am trying to give back to them, and give to future generations of the lore of (new) Brittania and the innovations of its creator’s.

Having created a system where you can not only listen to streaming radio inside the game, but also having the ability to collect wax cylinders with audio stored on them which you can play on in-game phonographs, it seemed like a no-brainer to be able to share music inside Shroud of the Avatar. So I suggested we do a listening party in the game. If there was one album where this concept fit, it was this one! Hell, I think I even hid some Ultima 7 music on the record somewhere. And Lord British himself is on the record. So we set it up and the unbelievable community in Shroud immediately jumped up and have prepared an incredible quest-driven party. The quests are being executed by the New Britannia Theater Troop, who are an in-game, live group of actors. Some of the great building constructors and creators are crafting custom locations and clothing for the event. Avatars Radio is going to stream the album in-game. And both Starr and Richard (Darkstarr and Lord British) have given it their blessing and are going to attend.

Now, going back to that 14 year old kid on the 386 in his room. Lonely and looking for adventure. Imagine what he would say right now? Probably something along the lines of “f**k yeah future Shooter, way to f**king go!“