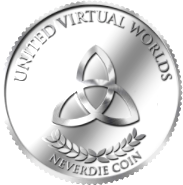 Today we announced a partnership with Neverdie Studios to support the company’s Initial Coin Offering (ICO). Neverdie Studios produces games, live action movies, records and virtual products. Their ICO is a blockchain-based project aiming to create an Ethereum-based gaming platform. Shroud of the Avatar is the first game outside the Neverdie product lineup exploring how to utilize Neverdie Coins (NDC). The two companies also announced today that Garriott would become an advisor to Neverdie Studios.

Jon “Neverdie” Jacobs, Neverdie Studios founder said, “This is a historic accord between two iconic avatars aligning to champion avatar rights. With the wise council of Richard “Lord British” Garriott, a legendary avatar, adventurer and world builder, providing priceless insight into the development of the gamified virtual reality infrastructure to unite MMORPGS and virtual worlds, I’m confident that our noble ambitions will remain virtuous and have the greatest chance to succeed. Richard’s council on the structure and balance of universal gaming tokens will be invaluable.”

“We are devout believers that people living in and contributing to our virtual worlds can and should earn real world value for the time and value they bring to our world,” said Garriott, Portalarium’s CEO and Shroud’s creative director. “Having direct access to a publicly tradeable currency is a great way to provide this. I’m also extremely pleased to be invited to advise Neverdie on this exciting and ambitious project. Additionally, Shroud of the Avatar already has a deeply committed player base while in early access. We are exploring how our players can earn market based value with NEVERDIE NDC and TPT tokens that are both useable directly in the game as well as traded on the open market.

To learn more about the offering and how you can get Neverdie coins, visit the official ICO page. The copy above came from today’s press release.

Back in Novia from vacation. Monster hunt?