AUSTIN, Texas, July 31, 2017 — Portalarium®, an Austin, Texas based game developer, and Travian Games, a Munich, Germany based publisher and developer, are pleased to announce today a formal partnership to bring Shroud of the Avatar™, the much-anticipated fantasy role-playing game from legendary game designer Richard “Lord British” Garriott to Europe, South America, Central America, the Middle East and North Africa. Travian Games will be coming on board as a partner immediately as Shroud is moving closer to the game’s commercial launch later this year. 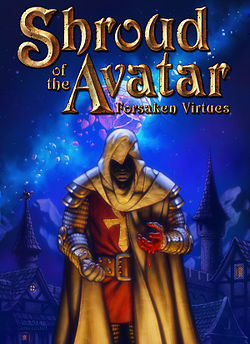 “We were looking for the best upcoming MMORPGs in our industry as well as a strong cultural fit, so we are truly excited about the opportunity to work with Richard and the Shroud of the Avatar team on bringing another great game to our community,” notes Lars Janssen, CEO of Travian Games. “Portalarium’s vision is very similar to ours and we believe this is the start of a long-term relationship between our two teams.”

“Europe has always been a strong market for the Ultima games so we wanted to be sure we found the very best partner who could who truly understands what we wanted to accomplish with Shroud,” explains Richard Garriott.

“Travian Games is that partner because they really understand community and development which has allowed them to build a huge base of millions of players.”

To date, backers of Shroud have logged more than three-million hours of game testing, and the latest update, Release 44, now permits backers to complete the entire Episode 1 story, from beginning to end.

Shroud of the Avatar, the spiritual successor to Garriott’s Ultima series of fantasy role-playing games, is a “selectively multiplayer” game, and includes a deep story crafted by Garriott and New York Times bestselling author, Tracy Hickman ( Dragonlance series). The game combines a detailed sandbox style Massively Multiplayer Online Role-Playing Game (MMORPG) with a single player narrative mode. With Release 44, players can now complete the paths of Truth, Love and Courage and ultimately discover the secrets of the Shroud of the Avatar.

“The story craft is not at an end,” said Garriott. “More side quests and revisions to improve quality, will continue to be added to the game month after month, yet this is the first time the full plot has been playable, and is among the last major milestones needed for a commercial launch later in the year.”

The remainder of the game is already in what would traditionally be considered a beta state. There are some skill trees and recipes still needing to be completed, and plenty of balance and debugging remains, but Portalarium is now shifting its team and company into the stance of a publisher as the commercial release approaches.

“This marks the 44th monthly release for Shroud of the Avatar,” exclaimed Garriott. “And these updates have occurred on the last Thursday of the month on time, and the servers have had nearly four years of continuous software stability. In Release 45, players actively testing the game will receive the ability to ‘reset’ their story status, and thus be able to get a fresh run through the now completed main quests, without having to start a new character.”

Shroud of the Avatar’s original crowdfunded campaign began in 2013. Currently with more than $11.8 million in crowd funding, Shroud is the second highest fully crowd funded game ever. More information about the crowdfunding campaign and the game can be accessed at www.ShroudoftheAvatar.com .

Recently Portalarium extended their crowdfunding efforts to include equity crowdfunding using the SeedInvest platform. This allows people to invest in Portalarium while backing the project. To learn more go to www.seedinvest.com/portalarium/series.b .

At this year’s Gamescom in Cologne, journalists have the opportunity to interview Richard “Lord British” Garriott and Lars Janssen about the game and the new partnership.

Disclaimer: Portalarium is offering securities under Regulation CF and Rule 506© of Regulation D through SI Securities, LLC (“SI Securities”). The Company has filed a Form C with the Securities and Exchange Commission in connection with its offering, a copy of which may be obtained here:https://www.seedinvest.com/portalarium/series.b .

Portalarium was formed in September of 2009 in Austin, Texas. The company was co-founded by legendary game developer Richard Garriott, who created Ultima, one of the longest running and most successful fantasy role playing game series ever. The company is currently developing its next game, the crowd funded Shroud of the Avatar.

Travian Games GmbH, based in Munich, is a world-renowned, self-publishing developer of online games. The company offers complex, multi-layered adventure worlds that inspire players with their gaming depth and guarantee long-lasting enjoyment. A motivated team develops and markets online entertainment for all age groups. Travian Games currently services the following games: Crowfall, goalunited Legends,goalunited PRO, Miramagia, Rail Nation, Travian: Legends, Travian: Kingdoms and UnitedGP. They are translated into up to 40 languages and can be enjoyed by fans of long-lasting gaming entertainment all around the world. More information: http://www.traviangames.com

Press Release also published on Gamasutra and other websites.

Preparing for the PVP fishing contest