We are excited to announce a candidate launch date for Shroud of the Avatar! On Tuesday March 27, 2018 (Release 52), we are planning to launch out of Early Access!

So what does that mean exactly for a game that has been both persistent for over a year and been doing monthly releases for over 4 years? Well, for us it means that we are delivering the list of features, including physical goods, promised during the Kickstarter albeit with a few exceptions and/or replacements (see below). It also means that we are going to grow our community through marketing campaigns

As we have stated previously, we intend to publish quarterly schedule updates detailing our monthly releases and those monthly releases will continue. Even though the goals outlined in these schedules are likely to change somewhat as we react to feedback, we feel it is important to periodically provide you with an updated roadmap. 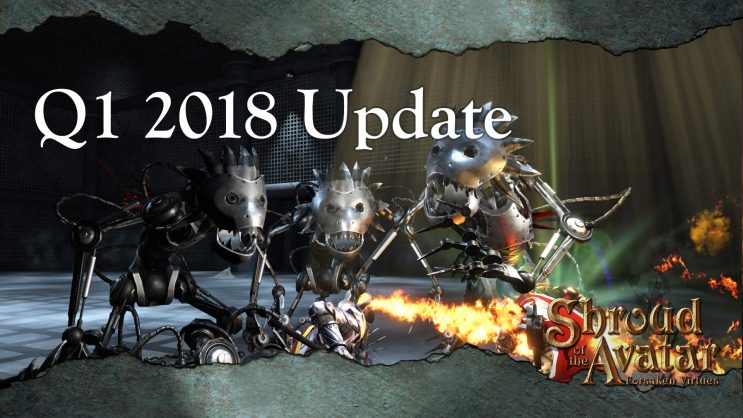 Our priority continues to be to deliver new content to our backers regularly, so that you can give us feedback that will help us iteratively improve Shroud of the Avatar. This collaborative process continues to benefit the game, and often results in sweeping changes such as the recent polish passes to the user interface. As you have seen in previous releases, the flexibility inherent to this process means that we sometimes push things out, but we also often pull new things in.

Most recently we have been collaborating with our partner Travian to survey our backers on their experience with the game so we can correlate feedback scientifically with the metrics we are collecting in the game. Thank you everyone who has participated, your survey answers have helped guide our Top 10 priorities for launch and our Q1 schedule.

Q1 Top 10 Priorities: As mentioned in last quarter’s schedule update we keep a running list of our Top 10 priorities at all times that we use when building our schedule and prioritizing where to allocate our team’s resources. We often refer to it when making decisions about the project. While it has a VERY strong influence on what we work on at any given time, it does not mean that we only work on something that is on the list. It just means that if someone can assist with something that will help address an item on the list, then we will make sure they do that first before working on anything else. Sometimes team members cannot assist with anything on our top priorities, so they work on other tasks such as visual polish, combat balance, or content that helps us raise funds. Q1 will focus on performance, launch preparations, and polish.

“We believe that we have reached the final 20% of development before Commercial Release, at which point we will transition out of Early Access. The next two quarters will be the most exciting and challenging times for the project so far. This will be when we get the final features and content in the game and make the last important balance changes. The changes will be fast and furious, and they may occasionally be hard to understand when you become accustomed to the way things were before. Please trust that we firmly believe that every change we make is best for the long term health of the project.”​

As always, all dates, durations, and deliverables are subject to change as we adjust our designs based on direct feedback from you, our backers.

NOTE: Release 52 launch date is a Tuesday vs. a Thursday due to Easter weekend.

Launch: Yes, you read that correctly, we are launching out of Early Access with a candidate build at the beginning of 2018! So what does that mean exactly for a game that has been both persistent for over a year and been doing monthly releases for over 4 years? Well, for us it means that we are delivering the list of features, including physical goods, promised during the Kickstarter albeit with a few exceptions and/or replacements. It also means that we are going to grow our community through marketing campaigns. 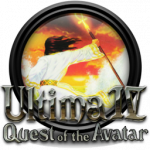 As we present the overview of launch content it is worth reviewing what our vision is for Shroud of the Avatar. Shroud is a role playing game that is the spiritual successor of the Ultima* games that Richard “Lord British” Garriott started making 40 years ago that blazed the trail for what is often described as immersive sandbox role playing games. NPCs with schedules, choices that matter, the virtues, the word Avatar, games in a box, cloth maps: all those things came first with Ultimas*.

It is also the spiritual successor of Ultima Online*, the game that is credited with pushing MMOs into the mainstream & coining the term MMO. That game was built with Starr Long, aka Blackthorn, aka Darkstarr who is once again working with Richard on Shroud. Like the

Ultimas*, and Ultima Online*, Shroud is a role playing game where you immerse yourself in a massive sandbox where you are challenged to make choices based on Virtues. It is a game where you can accept that challenge solo, with friends, or against other players through deep and interdependent roles supported by a complex crafting and economic system.

Much like all of Lord British’s previous works Richard pushes the team to make the world be interactive and immersive. This manifests itself with a working celestial system and day/night system that affects the game mechanics, fully dynamic lighting where every light can turn on and off, all the doors can open and close, traps and locks abound, NPCs have schedules, and much much more.

On top of that deep sandbox is a rich story that Richard co-wrote with Tracy Hickman that follows three converging paths of Truth, Love, and Courage. All of this is woven together by a unique system we call Selective Multiplayer that allows you to play Offline or three different Online modes including Single Player Online, Friends Online, and Open Online.

Now that we have reviewed the vision here is the broad overview of the launch content:

Where is my favorite feature?: While we were able to get almost all Kickstarter features, pledge rewards and every other randomly mentioned or thought of feature over the last four years complete by launch there are a few that are not going to make it in time. Please rest assured that we are going to put forth every effort to get all of these complete by the end of 2018 in one of our regular monthly updates (yes we are going to continue to do those each and every month just like we have for the last four years!).

We continue to be incredibly thankful for the support we receive from this amazing community. While the funding you provide makes all of this possible, it pales in comparison with the faith you have in us, the feedback you provide us, and the content you are making for everyone to enjoy. We are humbly grateful, and we cannot wait to see you again in New Britannia!