Thank you for being a loyal backer and follower of Shroud of the Avatar. Release 22 access for all backers at First Responder level and above (as well as DragonCon attendees) begins this Thursday, September 24, at 10:30 AM Central Time (16:30 UTC).

Release 22 feels like a turning point for us. We are starting to gain real momentum on being able to tell the story through new scenes added each release.

This release in particular is important for the story because one of those new scenes is the Isle of Storms—our homage to the beloved starting experiences of Ultimas, where questions answered determine your starting path. We are also expanding the breadth of our sandbox experience with new ways for players to engage with the world (fishing) and each other (musical instruments and emote teaching). This expansion in two axes is exemplary of the kind of game we are trying to make, while at the same time very illustrative of how challenging it is to do so.

We also continue to remain dedicated to being responsive to all of your feedback and our analysis of gameplay data. We will continue to make iterative changes to the game to make it better, even if it costs us time. In Release 21, that dedication led us to move to a use-based advancement system. In Release 22, we finish the bulk of the work to complete that change-over. Going forward, we can now balance the game based completely on use-based advancement; no more lingering hidden player levels to hinder this progress. That responsiveness also led us to pull in PVP Loot and Ransom this release, because we felt that the PVP experience was not even close to where it needed to be and it had been too many releases since we had expanded PVP play in any meaningful way. 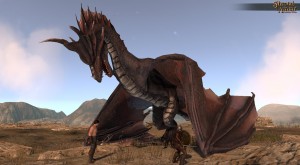 Release 22 also brings us to the culmination of this entire quarter’s creature work. Many of you may remember that we first began with the Troll in Release 20, trying to see how big we could make creatures and how different we could make the experience of fighting large-scale enemies. This led us to solve technical challenges, like them turning around properly and their head tracking their current target, which in-turn led us to solve turning and head tracking. It also brought us cool features like trajectory-based knockback, allowing these big creatures to knock us off tall things (to better soften us up before eating). In Release 21, we started solving problems around combat with flying creatures with the Phoenix. Now we come to Release 22, where all that learning combines into our largest and most complex creature yet… the Dragon! We still have more polish on these large creatures to get them to the quality standard we all want, but they are already inspiring to see and fight.

We also were finally able to make some time for a round of optimizations that have greatly increased performance in our worst areas. Some say Ardoris is even playable! We plan to get even more performance improvements in Release 23, when we hope to upgrade to a newer version of Unity 5. Speaking of Release 23, tomorrow I will be posting our Fourth Quarter Schedule Update as usual. It will show the roadmap for the next three releases after Release 22 so everyone can see how we plan to finish out 2015 (spoiler: we don’t finish the game).

I want to express a huge amount of gratitude to our Dev+ backers who tested all of the below on the QA server and found lots of bugs. They also provided editorial feedback on this post so they are a big reason that this post actually matches what is in the game and that it is easy to read.

While we are getting closer to launch, we are still in a constant state of change, and we do not yet have in-game systems to inform players of these changes, or to share ways to help them to explore new content and systems. This means we rely entirely on this message, and the linked instructions and known issues to convey the current game state. 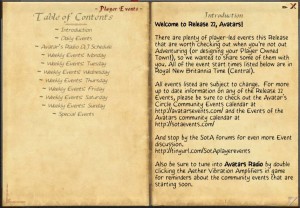 We regularly have to answer questions or filter bug reports because some players elect not to read this valuable information. By taking a few moments to read through this information, a great deal of our time and efforts can be redirected to focus on new “unanswered” questions, and addressing critical issues impacting each release. We greatly appreciate you taking the time to review this post, and for all the truly valuable feedback you continue to provide.

Also, remember that while we are providing new content with each release, our community is working overtime to make new events for you to enjoy. So, be sure to check out a couple of the Community Events Calendars run by our community members (via in-game book or the player run websites Avatars Circle Community Events and Events of the Avatars calendar).

Without further ado, here are the R22 deliverables.

We need all your help with testing the new patches, putting more stress on our multiplayer servers, and testing the new game content, so please join us in playing Release 22!