Long ago incredible magical forces crafted this island on shards of the shattered moons where it still floats high above New Britannia. Arabella greets new avatars coming from Earth and guides them with a series of questions that will determine which path they start down: Truth, Love, or Courage. These paths not only determine which plot thread you begin with, they also determine what your starting abilities are and what equipment you have. Building this scene required some new solutions for terrain to allow us to show the island floating in space.

The massacre at Blood River was first reported in Update #141, with images depicting the bloody, smokey effects of the massacre. Esteben Zaldivar has been cleaning up the Blood River scene, depicted here as it will appear when players come back later: 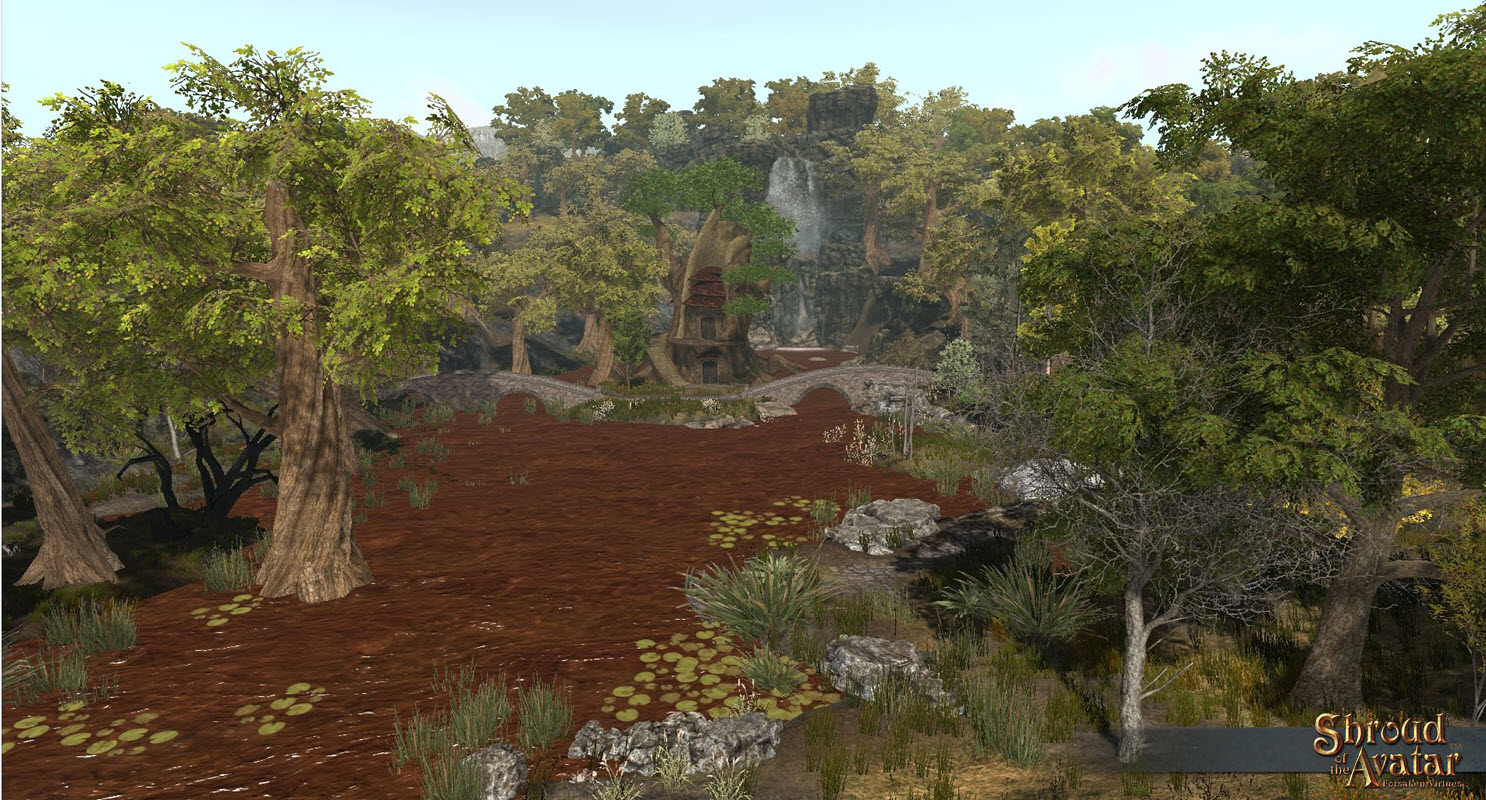 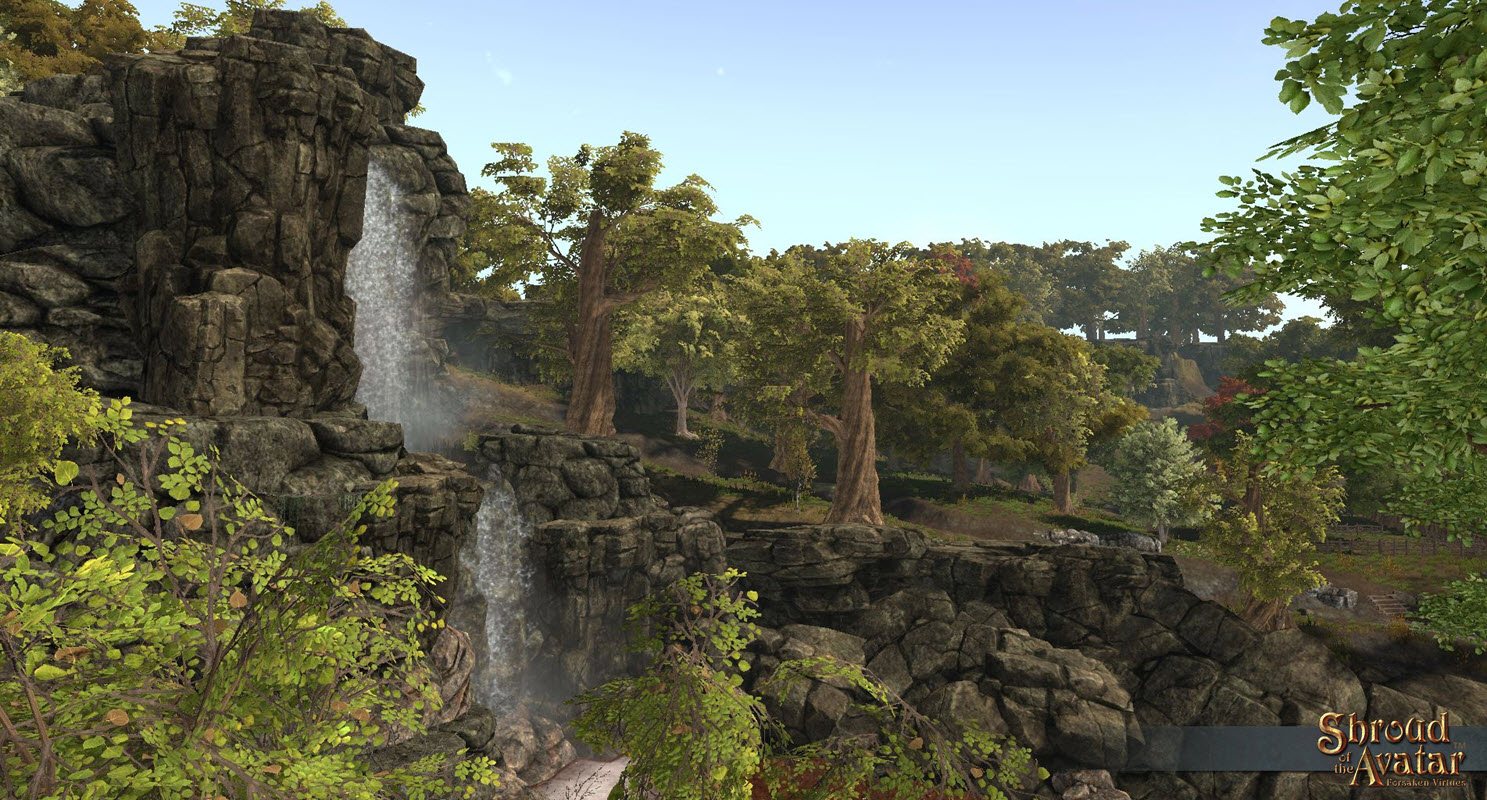 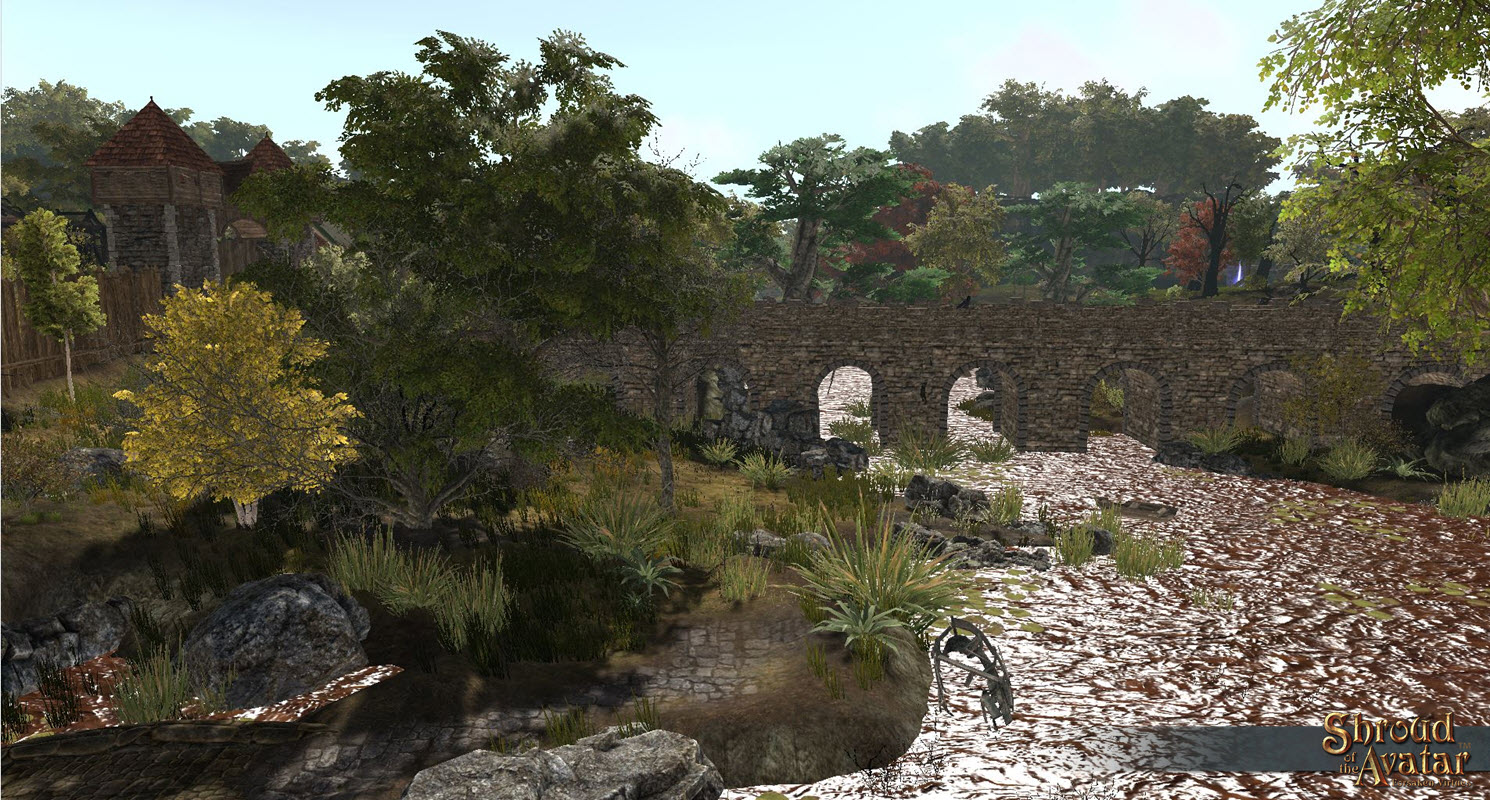 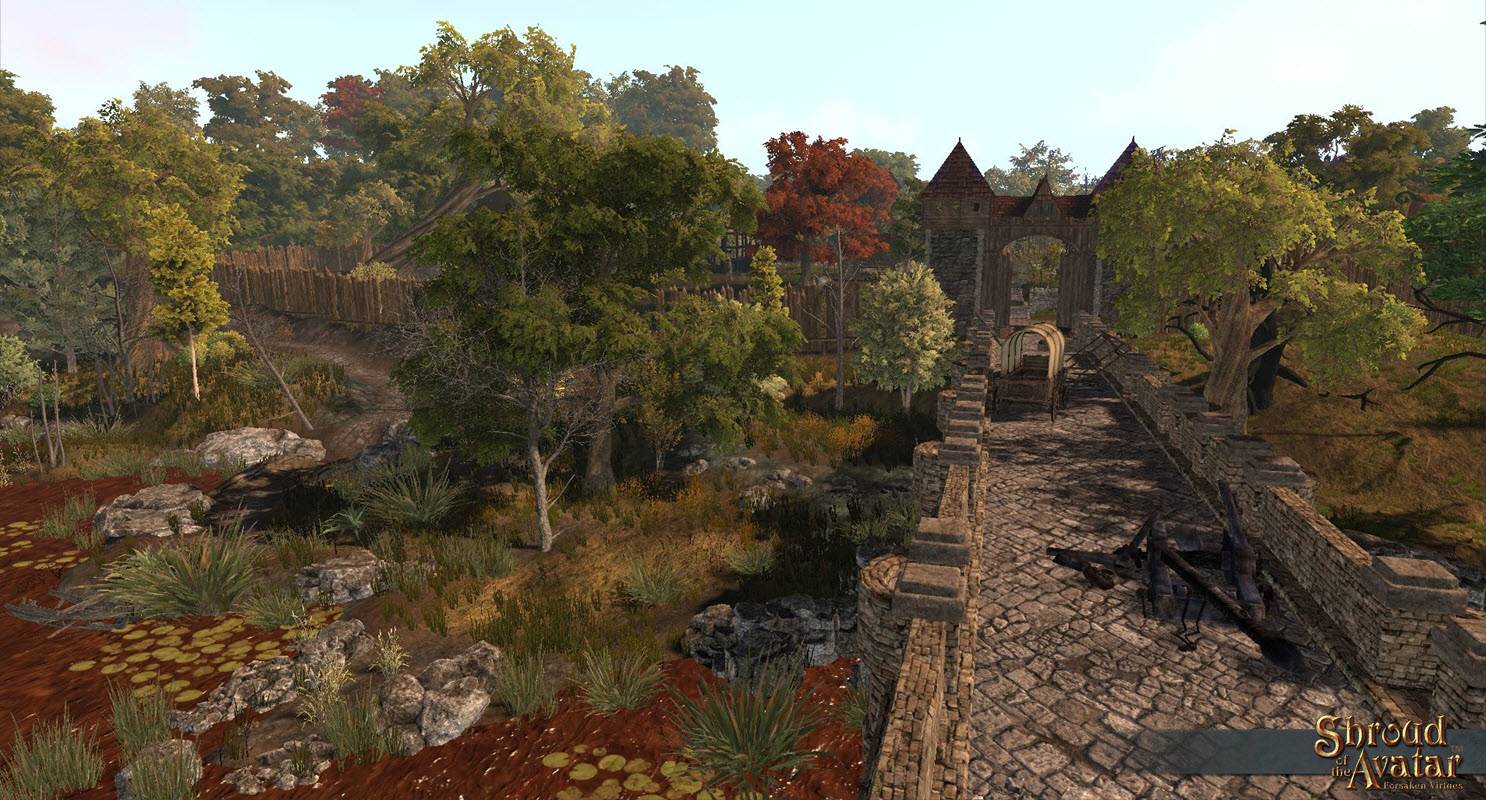 As you know, Dragons are making their debut in Release 22 next week! Here’s a cool video that Andy Cortez captured of Bren Wilson working on the Dragon animations:

In every army there are those who lead, and those who are led. The brutal nature of the Obsidians only amplified this simple truth. Thus was the existence of the race known as Fauns, engineered to be slaves for their more aggressive masters, the satyrs; a pairing which has persisted to this day through a bond few understand. Yet there are rumors of a faun who has broken his chains… rumors which fauns whisper among themselves when left unsupervised.

Here is a work-in-progress image of the Faun from our character art team. Look for these poor, enslaved creatures in an upcoming Release: 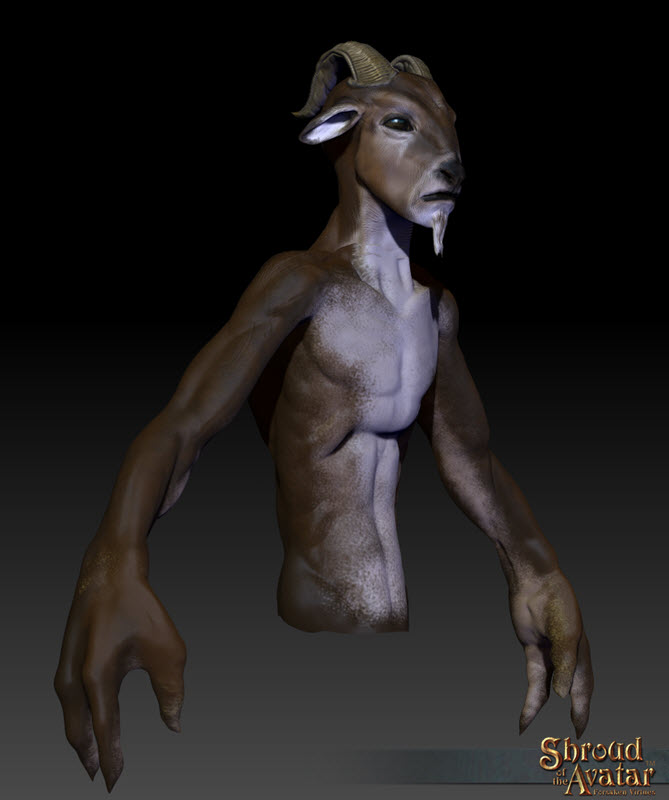 As reported in Update #141, the first iteration of the fishing system will be playable in Release 22 (yay!). Scottie Jones took some time away from working on the Hilt scene to create these mounted fishing trophies that players will be able to craft from their catches in R22: 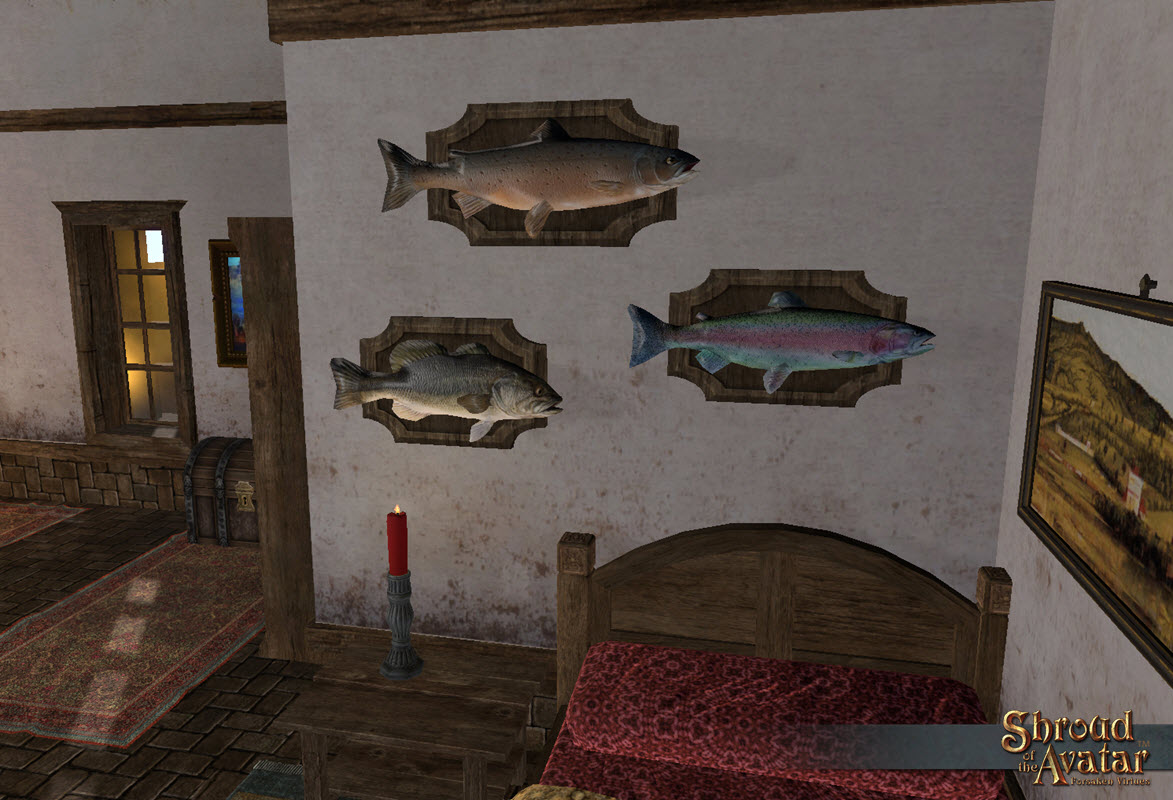 Just as we’ve been doing since Release 10, we’re including a Grand Tour Quest in R22 designed to guide you through all the new content. By completing the R22 Grand Tour Quest you will be rewarded with a pair of Steampunk Goggles. This reward can only be unlocked during Release 22 (did someone say rares?), so be sure to log in to R22 starting September 24 and talk to all the Tour Guides! 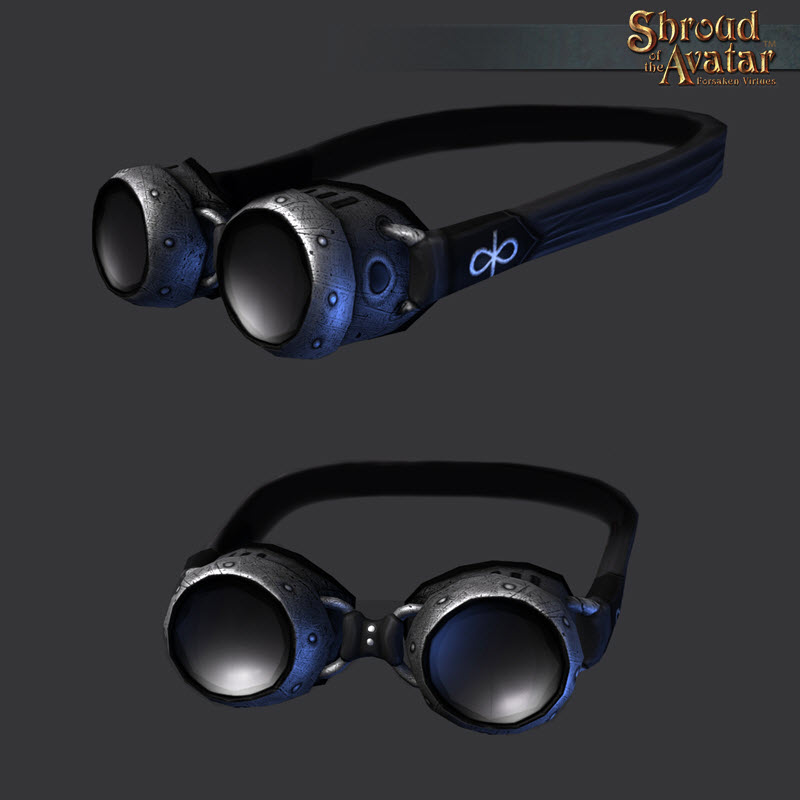 Better hurry if you want to add the Highwayman Hat to your collection because the R21 Grand Tour Quest ends next Thursday, September 24, when we launch Release 22!

And for those that love to accessorize, these dyeable Brown Steampunk Goggles are now available in the Add-On Store! 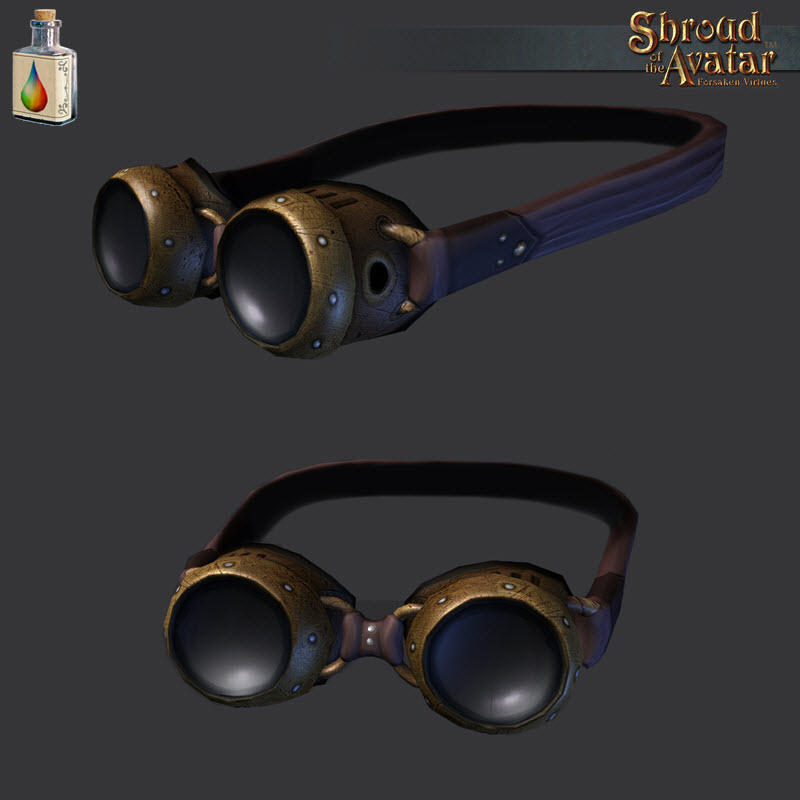 Last week we announced that RizeUp Gaming teamed up with Game4Autism and other stream teams for an Autism Awareness Charity Drive, lasting 8 days from September 14 thru September 22.

On Saturday, September 19th, between the hours of 5am CST and 5pm CST, streamers from RizeUp Gaming and DJs from Avatars Radio will be coming to Shroud of the Avatar. While their focus is to bring awareness to Autism and the Game4Autism organization, they will also be providing live coverage of in-game events supporting the Autism Awareness Drive.

And speaking of in-game events supporting the cause, join Avatars Radio, RizeUp Gaming and the Phoenix Republic for fun, games, music and shenanigans in Radio City from 2pm to 5pm CST on Saturday, September 19th! There will be Dancing, Races through the Avatars Radio race course, pet races and much celebration! Come win prizes and help raise funds for this important charity event! Contact Amber Raine, Kazyn Phoenixfyre or Eclipse Maiden for information about how to take part!

The proceeds from the Autism Awareness Charity Drive are being split equally between two organizations:

The National Autism Association, headquarted in Portsmouth, RI, whose mission statement is “…to respond to the most urgent needs of the autism community, providing real help and hope so that all affected can reach their full potential.” The National Autism Association is a parent-run 501(c)3 nonprofit organization. Founded in 2003, NAA is a parent-run advocacy organization and the leading voice on urgent issues related to severe autism, regressive autism, autism safety, autism abuse, and crisis prevention.

The National Autistic Society is the leading UK charity for people on the autism spectrum (including Asperger syndrome) and their families. They provide information, support and pioneering services, and campaign for a better world for people with autism.

Additionally, as part of Portalarium’s founding purpose to promote good will and make a positive difference in the world, we’ve included the following charity items to our Make A Difference Store. For each of these items you purchase, Portalarium will donate 50% of its share of the purchase price to be equally split between the National Autism Association and The National Autistic Society. By purchasing these items, you are helping to make a difference in the lives of those that need our help.

You will definitely stand out from the crowd with this stylish cloak themed with the multi-colored puzzle pattern signifying your support of Autism Awareness. 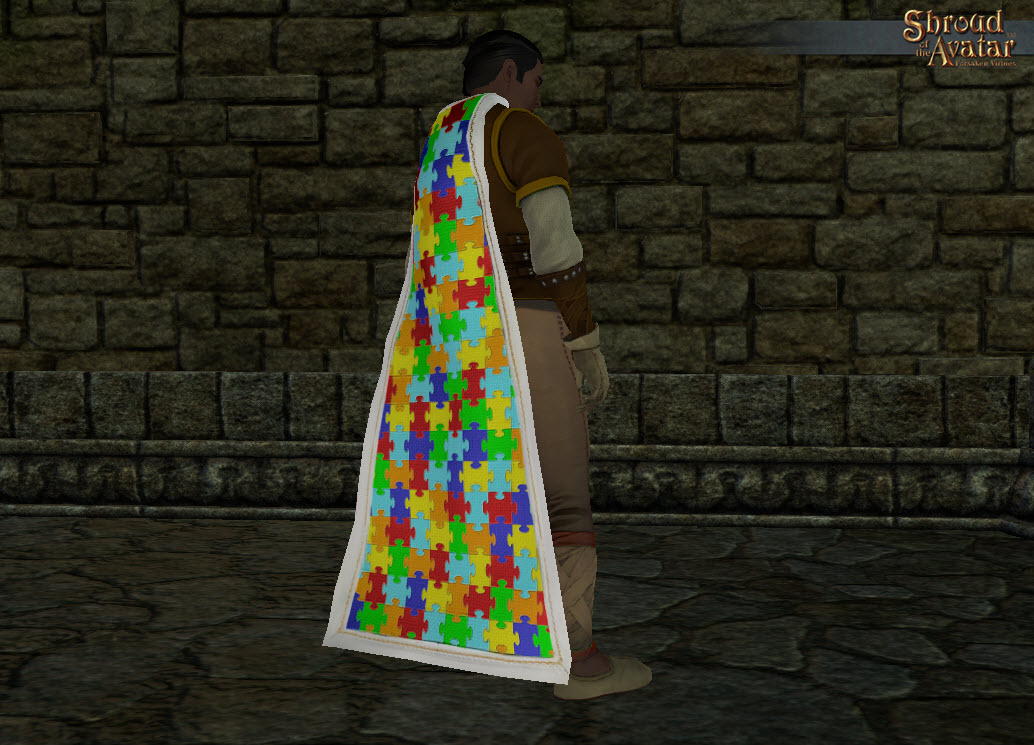 This Puzzle Tree Cloak can be dyed to the color of your choice, allowing you to accessorize while also signifying your support of Autism Awareness. This image is a work-in-progress: 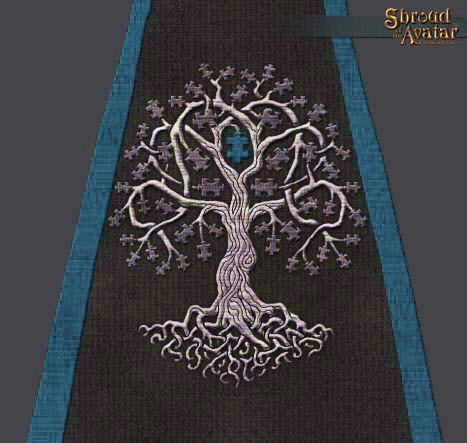 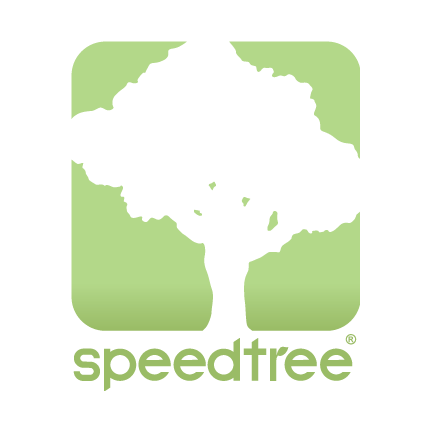 [NOTE: This Speedtree logo is placeholder and not representative of what the Puzzle Tree will resemble]

Buy all three of the Autism Awareness charity items and get a bundle discount! Includes the Puzzle Pattern Cloak, Puzzle Tree Cloak, and Puzzle Tree 6-Pack! 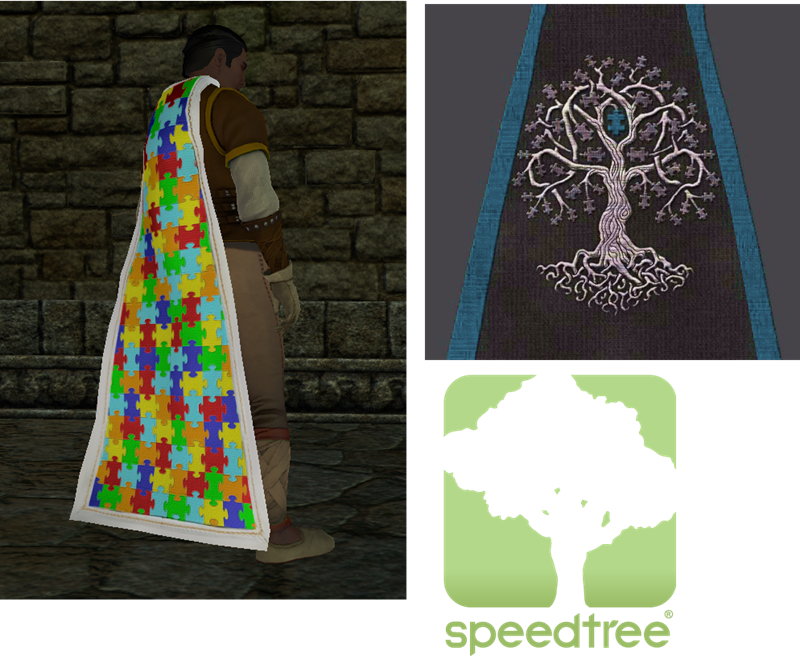 [NOTE: The Speedtree logo in the above composite image is placeholder and not representative of what the Puzzle Tree will resemble]

Just in time for Halloween, we’ve added the following items to the Add-On Store:

This stylish Witch Hat can be dyed to better accessorize with your Halloween attire! It is a Limited Time item, available in the Add-On Store until November 30, 2015. 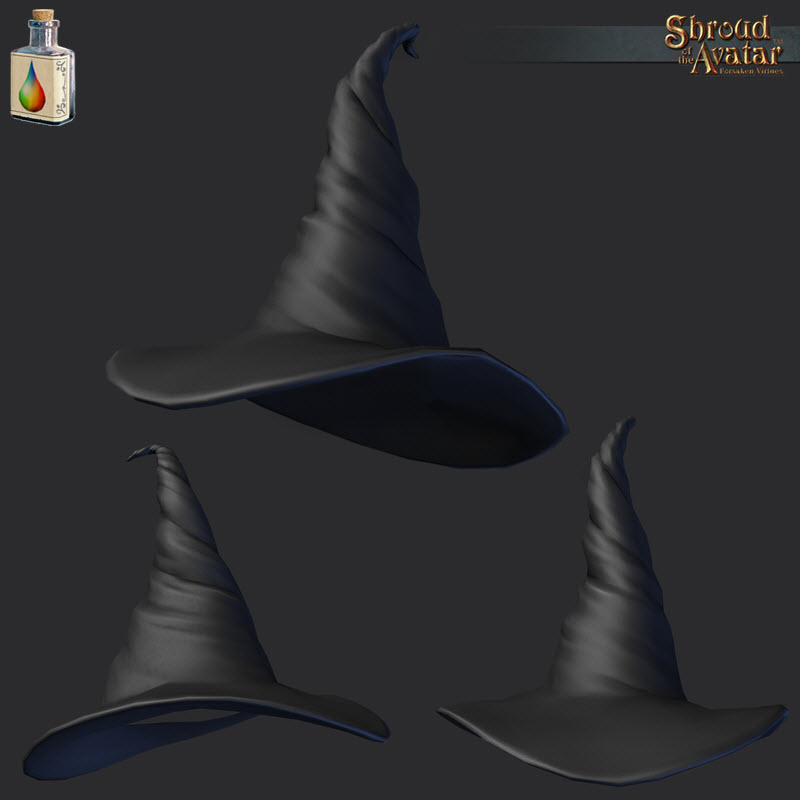 Frighten your friends with these scary spider wall decorations, available in the Add-On Store in an assortment of poses and sizes!

[NOTE: These are static decorations and do not move]

This set of spiders are standing still, waiting for their prey to get closer.

This set of spiders have become alerted and aggressive, sensing their prey is almost within reach.

This set of spiders have gone into full attack mode, drawn back and ready to strike!

Save on this bundle of all three Spider 3-Packs! Includes the following: 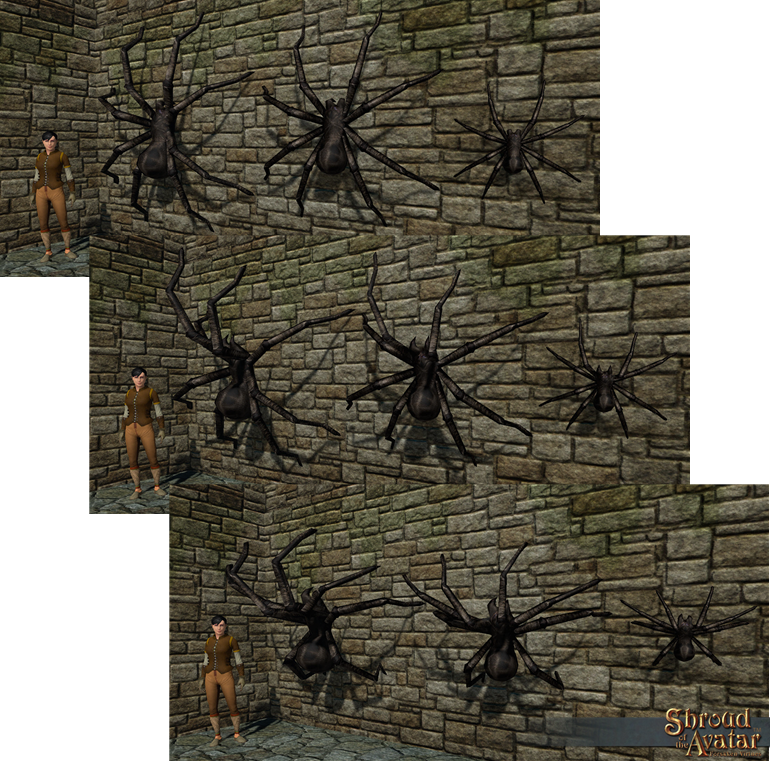 As we approach the last quarter of 2015, and major milestones such as Alpha and Beta are looming ever closer on the horizon, we are announcing the Fall Reward Expiration Event that occurs at Midnight CST, November 2, 2015. This event includes the following reward expirations:

We implemented the ability to automatically cancel monthly layaway payment plans, no longer requiring you to cancel them manually. Starting September 7, 2015, any payment plans that reach their desired pledge level will be canceled automatically. You are still able to cancel your plan manually at anytime by going to your Account page.

There are several payment plans that have exceeded their designated pledge level that have not been manually canceled by their account holder. The backers of these payment plans will have until September 30th to contact our customer service department at support@portalarium.com to let us know that they would like for the payment plan to continue, or they will be automatically canceled on September 30, 2015.

Our amazing community has another great lineup of in-game events planned for this weekend. Special thanks to community member Justyn (Clan of the Wolf) for her help in compiling the latest schedule of player events from the Avatar’s Circle Community Events calendar and the Events of the Avatars community calendar:

Be sure and check out the Release 21 Events thread in the SotA forums for additional events that may not be included here.

The New Britannia Theatre Troupe presented a new play last weekend entitled “Conversations in PaxLair.” The play was held at Doctor Shroud’s lot in the player town of PaxLair, with Avatars Radio broadcasting the voicing audio. In case you missed it, here’s the video:


Recommended Games to Back

Hard to believe it’s been almost a year since our friends and fellow Austinites at Skyshine Games successfully funded their BEDLAM Kickstarter campaign! They have made great progress and we’re excited to announce they released BEDLAM on Steam Early Access this week!

BEDLAM is a strategic rogue-like turn-based RPG. You are the Mechanic, the last known member of a once-thriving guild of brilliant operators of the rolling fortresses called Dozers. You are in charge of commanding your crew in battles, managing your resources, improving your Dozer, interacting with various characters, and protecting your passengers while navigating through the post-apocalyptic wasteland. Your goal is to travel from the futuristic metropolis of Bysantine through the chaotic realm of Bedlam to reach the rumored utopia of Aztec City with as many of your passengers and crew intact as possible.

Hello to All and Hiya to Some

Hey everyone, we are going live in Shroud of the Avatar! ...