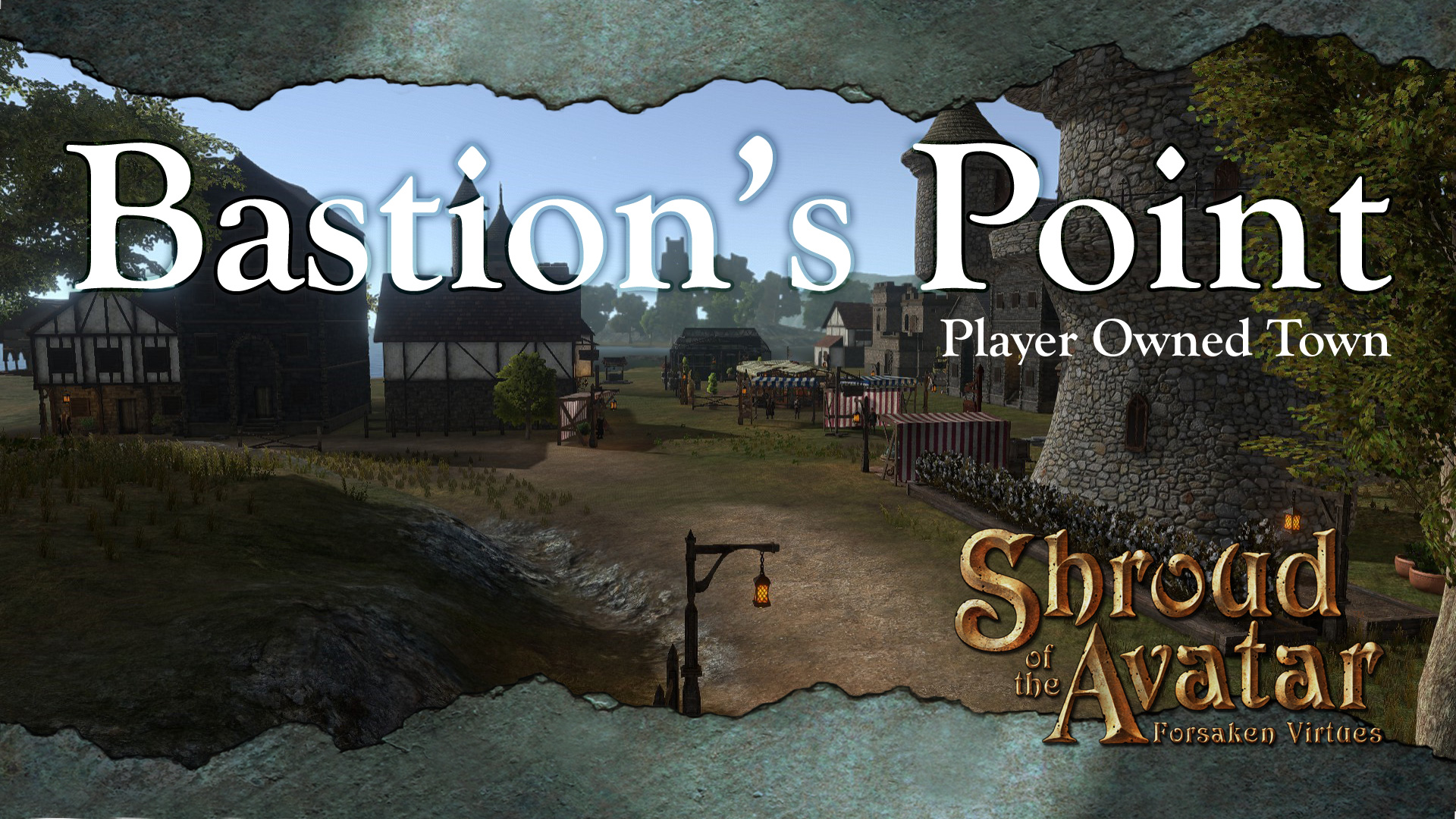 The first Player Owned Town spotlight kicks off with Bastion’s Point! We will be touring towns and talking with guilds and other groups, all of which are open to be spotlighted on coming tours brought to you by Berek, your community wood elf druid. Near Soltown, I saw a great many things in Bastion’s Point that drove me to write this spotlight. Here is what I witnessed: 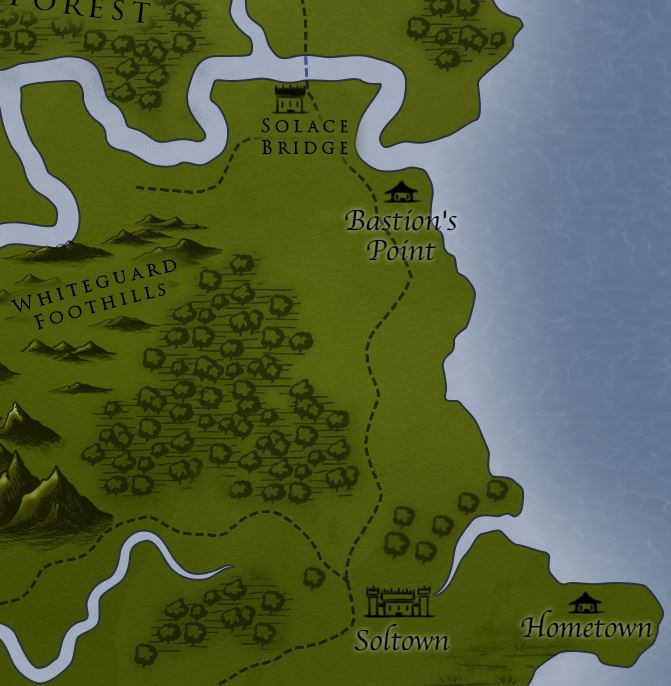 The other day I walked along the East Perennial Trail between Soltown and Solace Bridge. I was still dazed about the terrible things I saw at the Bridge and I needed a place to rest. To my good fortune, I came across a hamlet called Bastion’s Point just along the east coast. “Ah, I will rest here and perhaps get something to eat,” I said to myself.

As I entered Bastion’s Point, I felt a cool breeze of salt air which felt refreshing in the heat of the noon sun. I ventured further into town and found what initially looked like an inviting visitors center, until I saw the guillotine and the sign saying “executions every day brought to you by your friends at ‘A Bandit Camp'”. 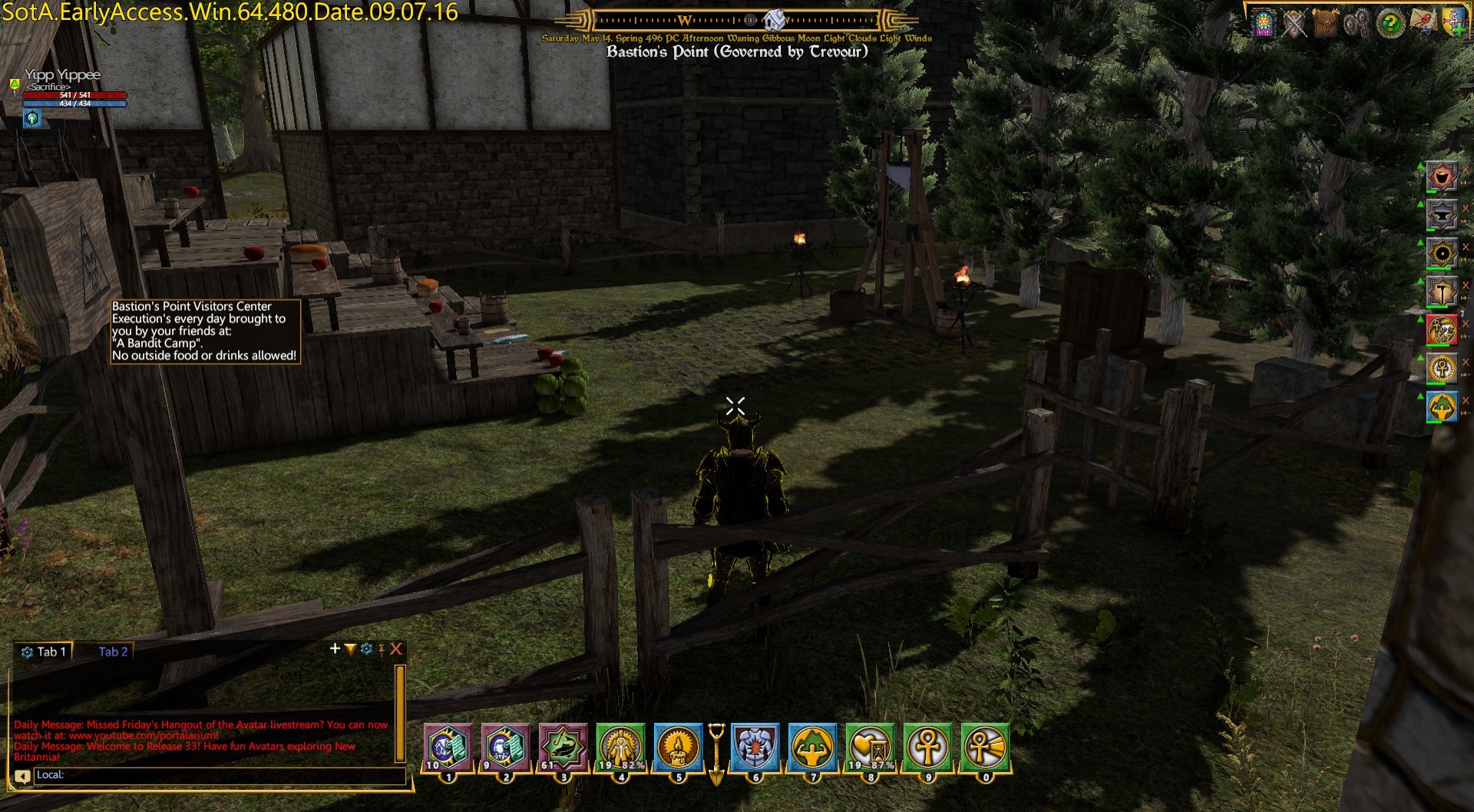 Turning down the road, I encountered an open air social center with finely crafted chairs, a piano, and some strange plants. It was here I met Governor Trevour, who led Bastion’s Point. He greeted me with a friendly handshake and offered me a pint of ale from Mac’s Black and Tannery. 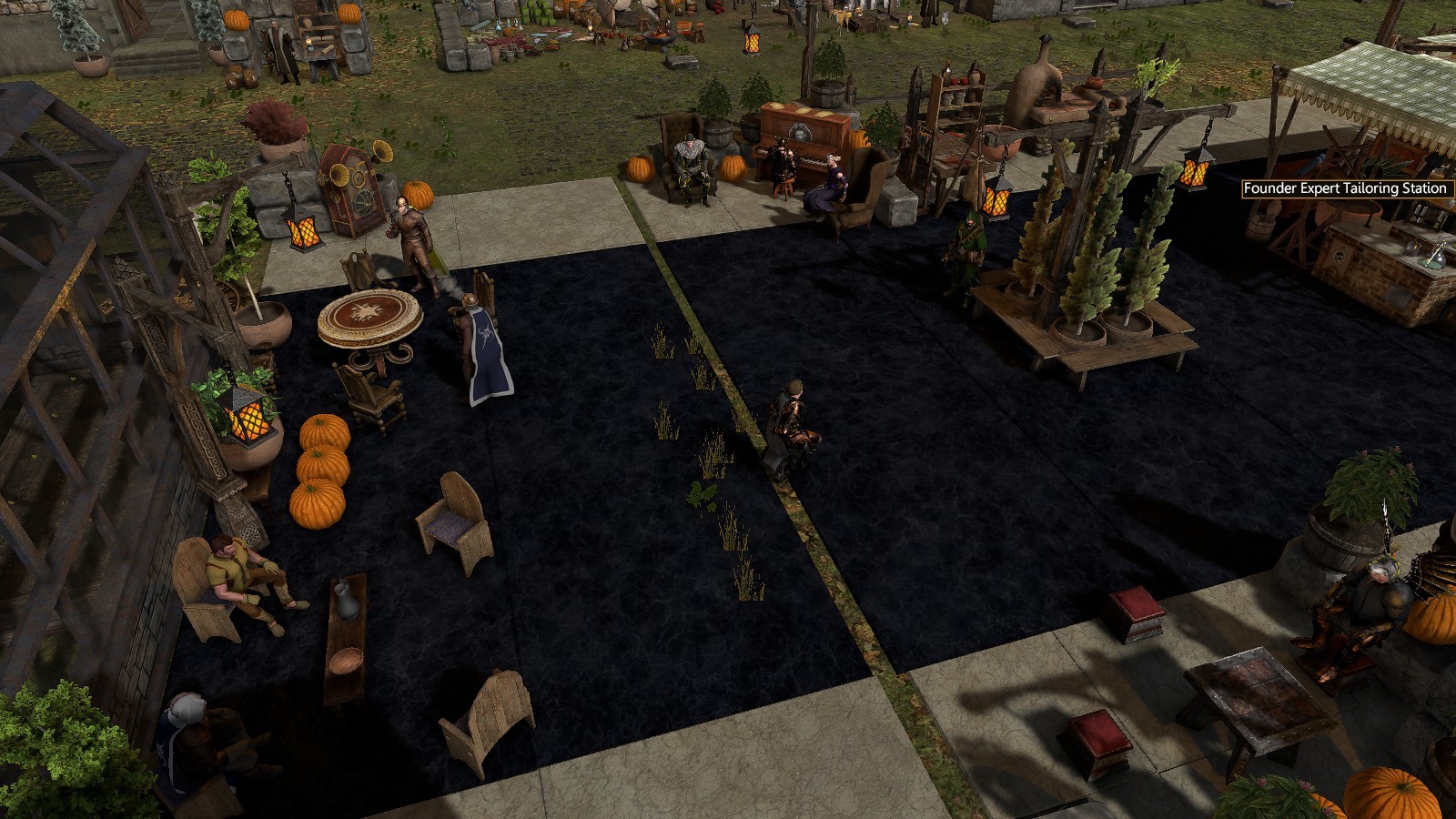 Why was Bastion’s Point founded?

We wanted to bring together our friends we met playing other games like UO, once again to enjoy the experience of their company and the fun of adventuring together. What better way to do so than by creating a player owned town that serves not only as our hub of activity but also serves as a welcoming demonstration of our vision for our joint gaming experience. And no better place to come together once again than a world created by Richard Garriott and his great team of fellow visionaries.

Who is welcome to reside at Bastion’s Point?

Bastion’s Point is open to anyone who has a positive attitude to the game and wishes to enjoy all aspects of SOTA; crafters, musicians, adventurers, PVP’rs, we even have an “A Bandit Camp”! We have been very fortunate to quickly meet new friends who are also like minded individuals. Each new resident of Bastion’s Point adds not only to our shared community spirit, but also brings us new adventures and experiences we did not expect. We look forward to meeting many new friends!

Tell us about your residents of Bastion’s Point?

We have a wide cross section of age groups and play styles represented within our community. Bastion’s Point is the HQ for Sacrifice Guild (Owners of Bastion’s Point) and Avatar’s of Sosaria (Twitch Streamers). We are also home to many individuals not in any guild at the moment who are enjoying the many advantages of Bastion’s Point. It is likely you will see a resident or member of the guilds residing in Bastion’s Point on 24/7 adventuring or crafting, say hello!

What is the future of Bastion’s Point?

Bastion’s Point is destined to become not the leading commerce hub or recreational venue in Novia, but to achieve the goals of our town’s Governor Trevour “A place for our friends new and old, to gather and have great experiences together”. We of Bastion’s Point welcome you to join us either as visitors or future residents!

What are the unique features of Bastion’s Point?

Bastion’s Point has all Expert Crafting Stations for use for all hard working crafters. We have an Open-Air Social Center with a leisure activities vendor supplying instruments and sheet music for weary travelers. For those into the “Ruff and Tumble” world of PVP combat, we offer Casio’s Smash Club and Casino, where fights are arranged and wagers taken and bruises can always be mended at Mac’s Black and Tannery. We do however warn all those loitering around the Outdoor Market Square to avoid “A Bandit Camp” as a few souls have approached only to have gone missing over a deal gone awry. Our fully stocked vendors offer a wide variety of crafted goods and supplies. We are always open to new ideas and suggestions about how to improve our town, let us know! 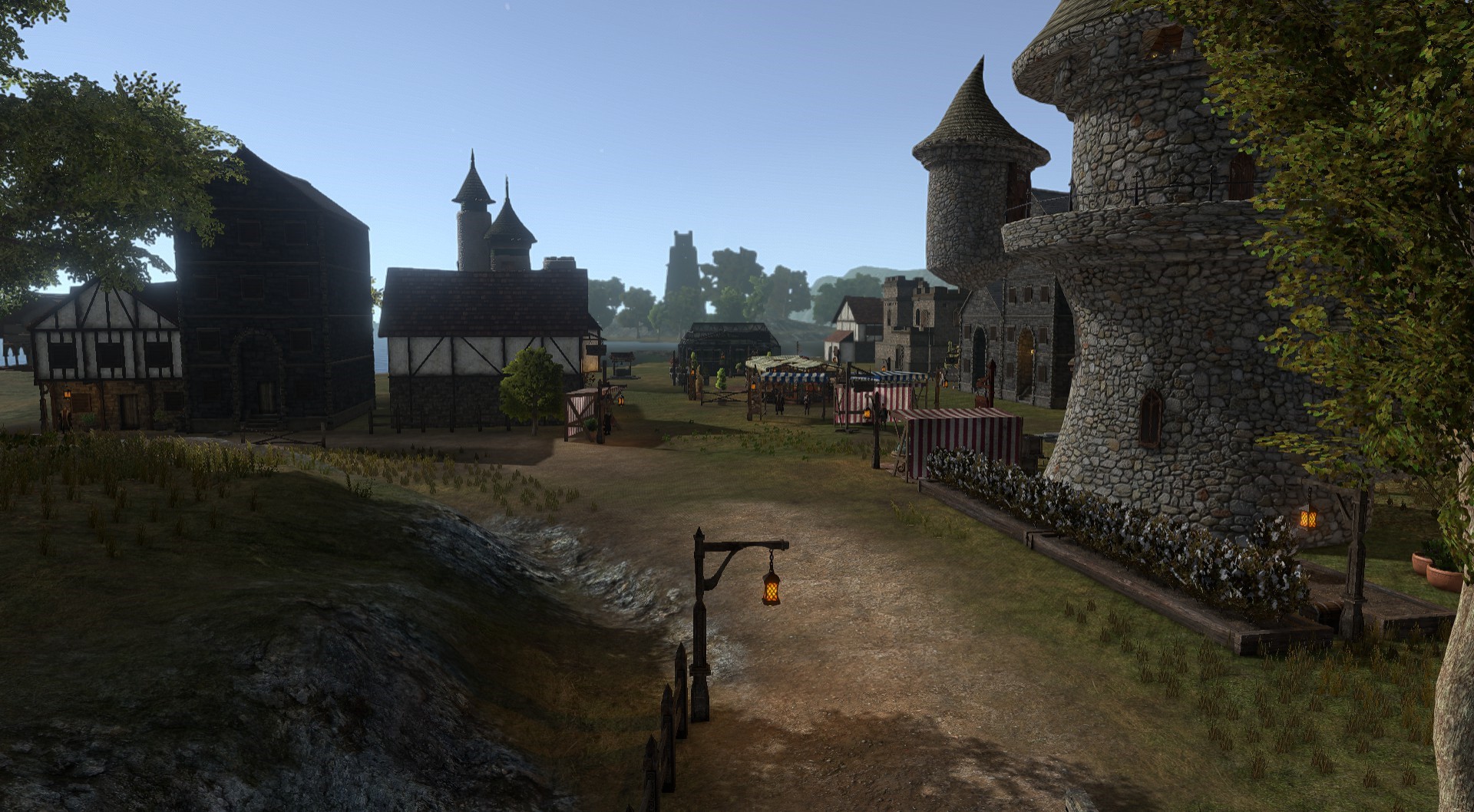 The latest vendors and their wares can be found on the guild’s website: sacrifice-guild.enjin.com 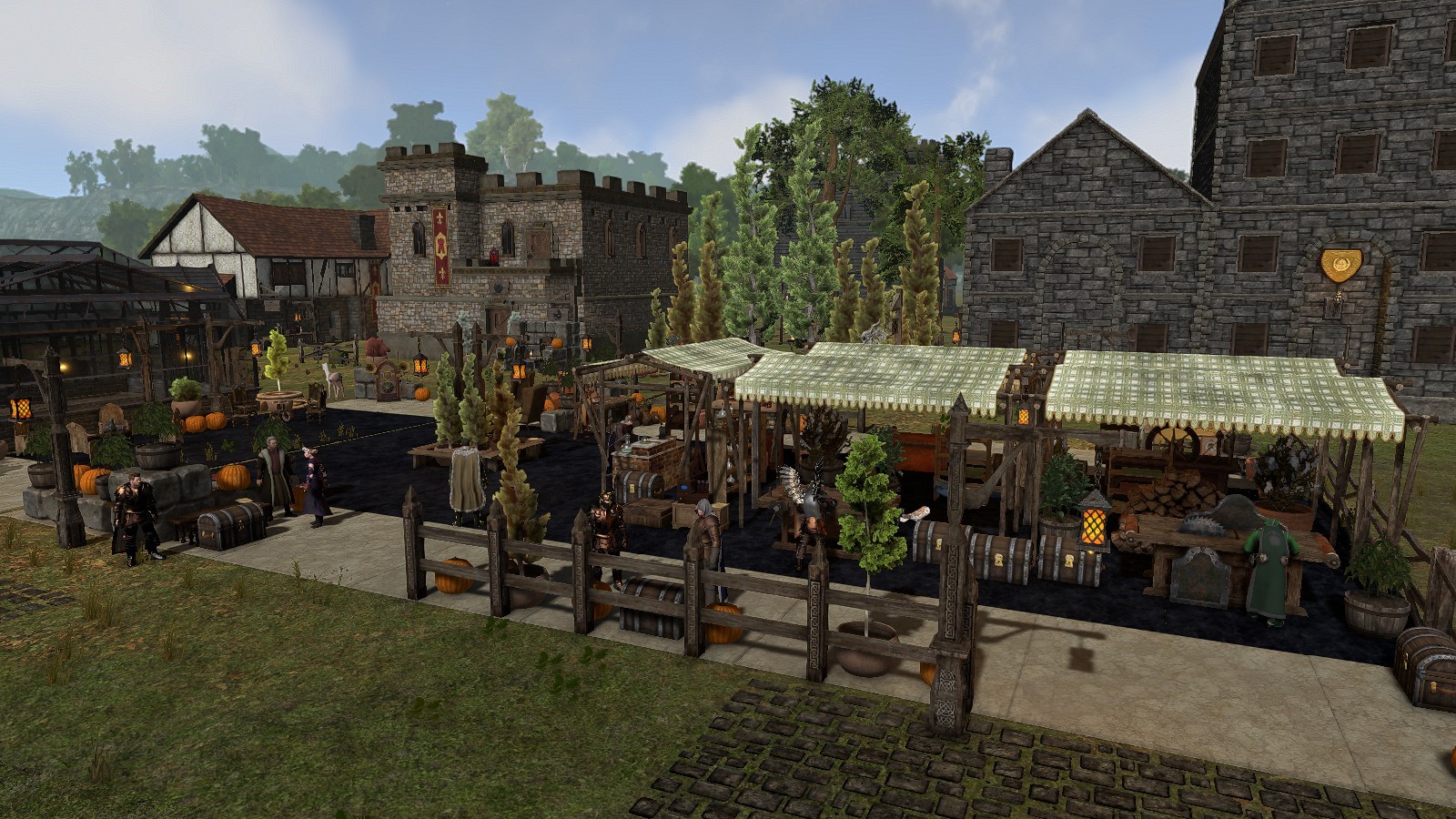 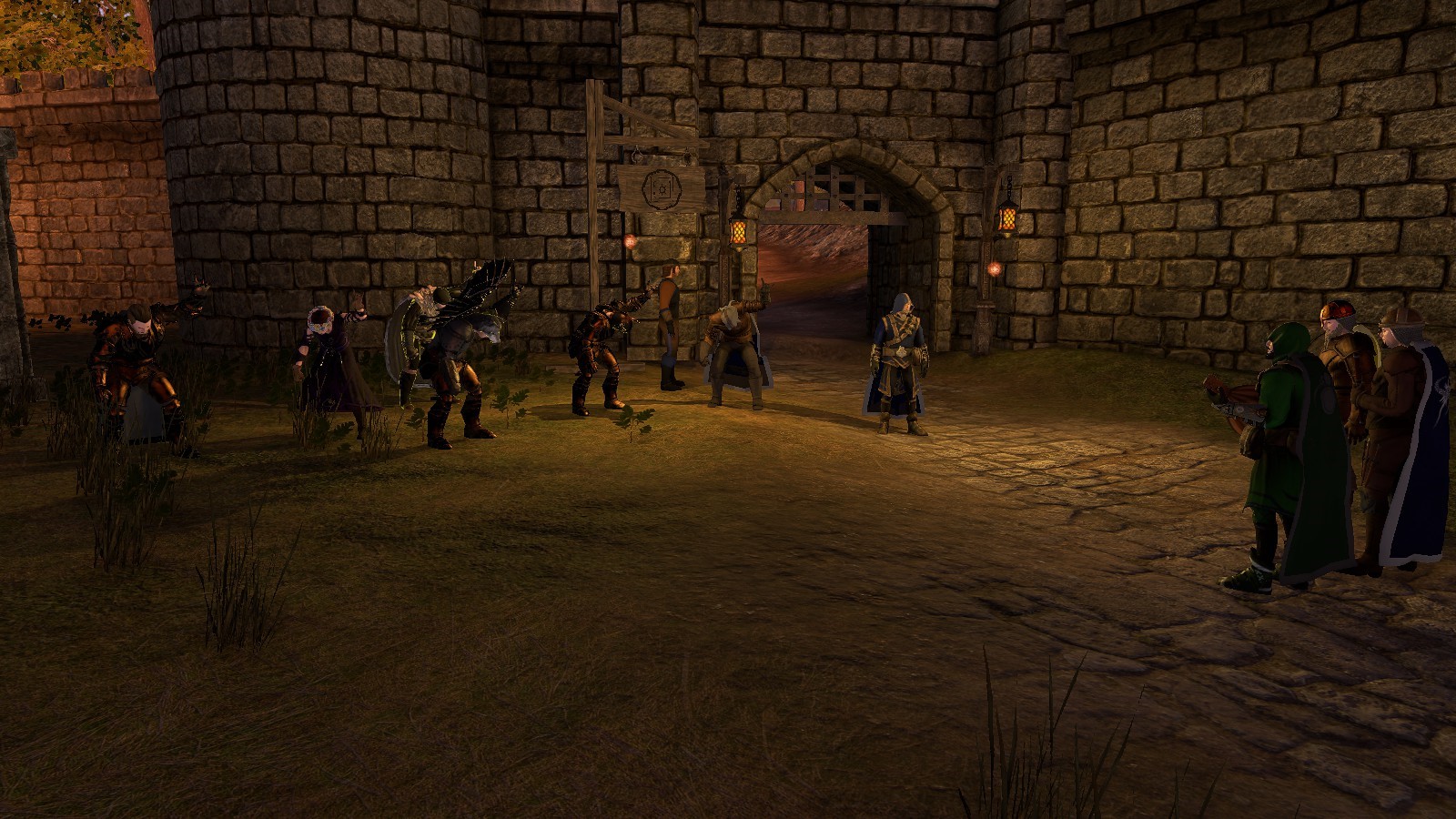 Do you have a Player Owned Town, guild, or other type of group that accomplishes and makes available great things for other players? Let us know! We would like to include your group in an upcoming spotlight. Just send Berek a brief proposal of what you have to show!

Wake up Wake up :) Good morning~

Shroud of the Avatar. Come chill with me friends.| !hype...