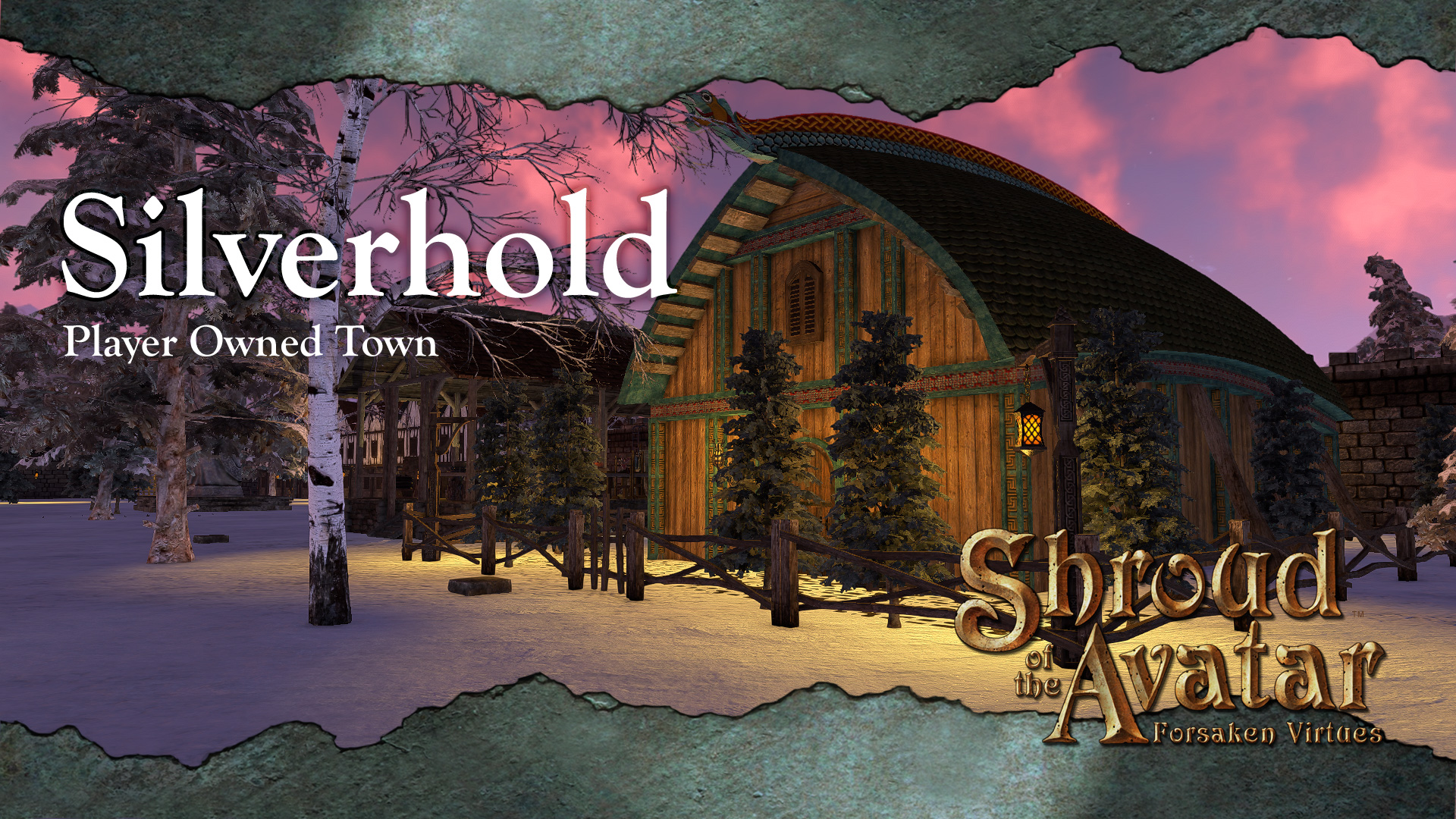 The second Player Owned Town spotlight kicks off with Silverhold! We will be touring towns and talking with guilds and other groups, all of which are open to be spotlighted on coming tours brought to you by Berek, your community wood elf druid. Near Port Phoenix, I saw a great many things in Silverhold that drove me to write this spotlight. Here is what I witnessed: 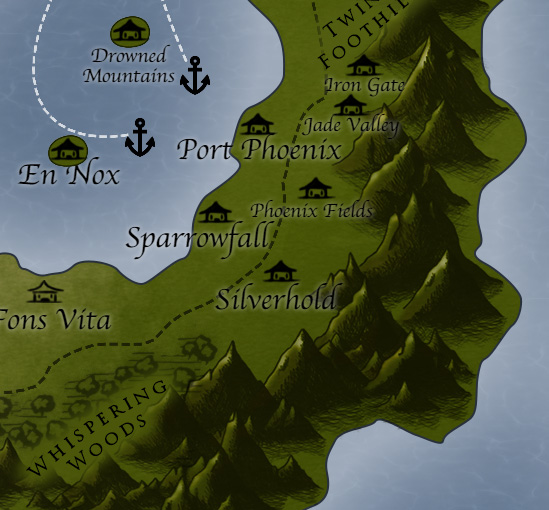 As I neared Silverhold, nestled in the higher elevations of Elysium, snow flurries began to fall around me. I realized this would be my first visit to a snow covered area of Novia. I did not prepare and bring a coat, but I managed.

It was no mild wintery weather here either, the white powdery stuff lay thick on the ground as the Town Crier greeted me upon entering the town. Clearly seeing I was new to the area, he suggested I visit the warmth of Silverhold keep. Governor Asher Silvarian enjoyed personally greeting newcomers to the town. I decided to take up this offer and headed up the trail toward monolithic stone structures in the distance. 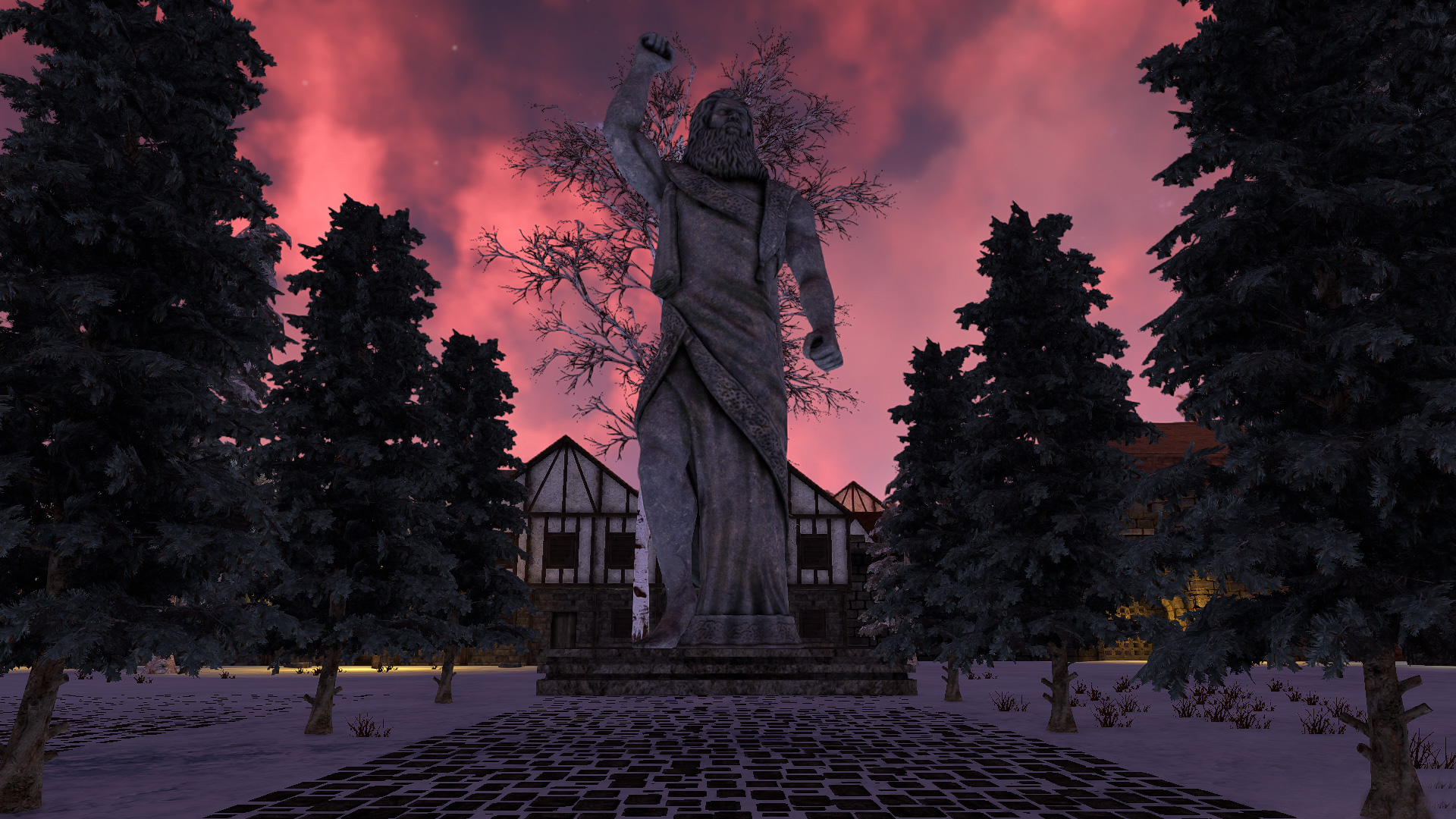 Half way up the trail I was challenged by a guard, and a large ominous looking guard tower. After stating my reason for coming this long way to Silverhold, I was allowed to pass with an obvious look of suspicion and apprehension. I knew I best be on my best behavior here, these military types are no-nonsense.

Upon arriving at the keep, I was Ushered onto the grounds and greeted by Governor Silvarian himself. Though initially apprehensive of how I might be welcomed, the Governor was quite amiable. A short exchange of pleasantries lead to a bit of a discussion and an offer of a tour of Silverhold itself. Governor Silvarian offered to tour Silverhold with him as we discussed the town, it’s features, history, and plans for the future. I gladly accepted. 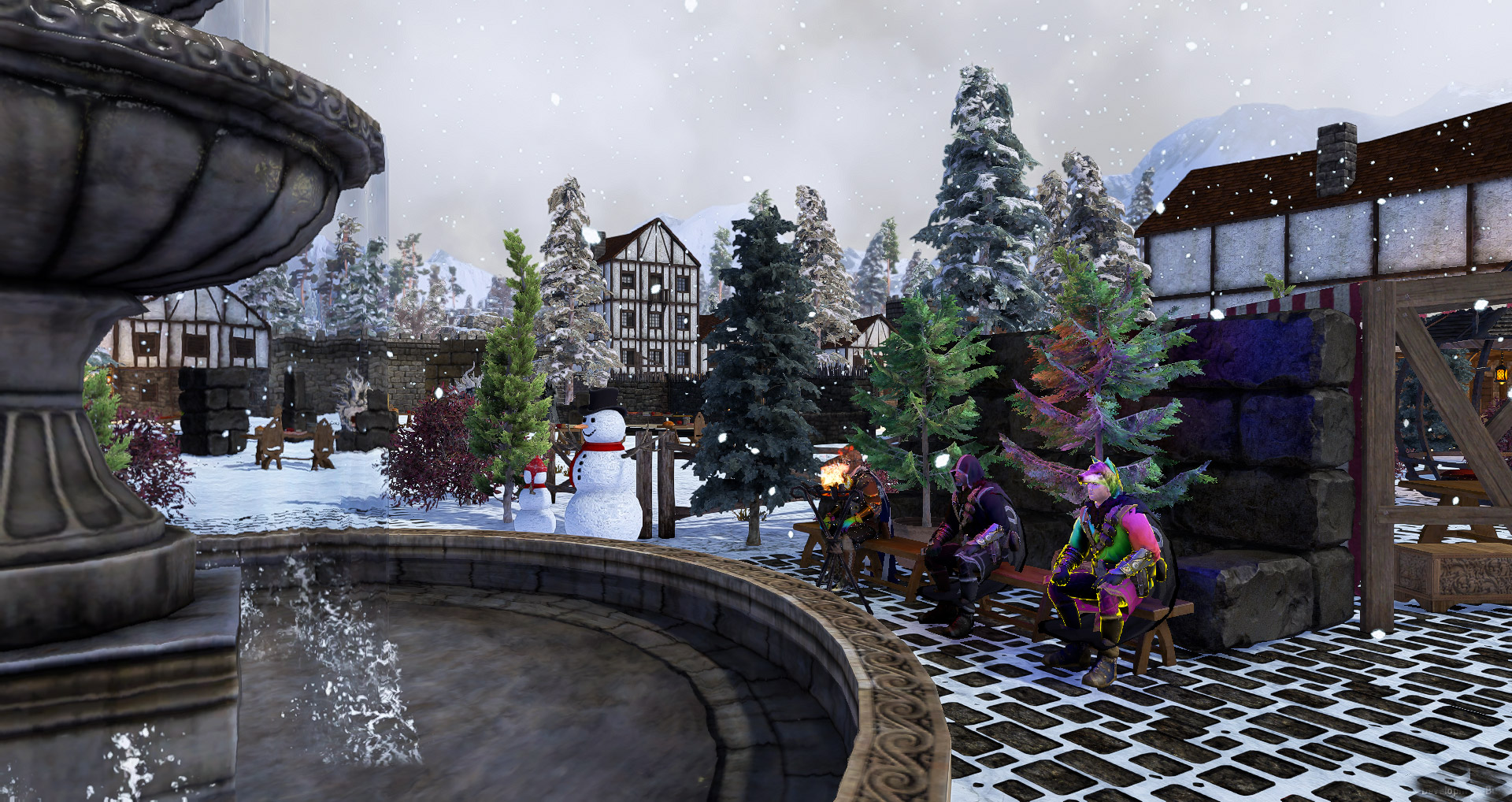 As we walked, I asked Governor Silvarian…

SilverHold is an ancient citadel left over from the Obsidian Imperial Era of the Phoenix Republic. This keep has long been the backbone of the first line defense for the Republic. It’s main service to the Old Empire, and now the Republic, has been that of protection against overland invasion from West Elysium via the southern shores of Elysium Bay. As such, it may be found situated at the eastern end of the Republic on the vast Isle of Elysium in the most southwestern reaches of the Novian continent.

Who is welcome to reside in Silverhold?

A contingent of elite soldiers is garrisoned in SilverHold to act as the initial defense of the Southern Elysian Shore Pass, and served as its initial inhabitants. However, things have changed over time. This once obscure frontier post, has grown in size and importance due to the migration of military families members moving to be with their loved ones stationed in Silverhold on extended tours. Add to this number, merchants seeking to benefit from the guaranteed coin which inevitably follows any large garrisoned group of soldiers, to civilians seeking to establish residence in what is considered one of the most beautiful, and coldest, areas of Elysium.

With two very productive mines in the area and a beautiful woodlands nearby, miners, smiths, millers and fletchers are bound to have a good time of it while residing in Silverhold. Tailors may have a tougher time of it but with a greenhouse or two, a tidy profit could be forthcoming even in this snowy environment!

If you seek adventure and perhaps a future in the expansion of Republic influence through military means when necessary, Silverhold can also hold a promising future for you!

Tell us about the residents of Silverhold?

The Silvarian Clan, the ruling family of SIlverHold for most of it’s extensive history, still occupies and governs this fortress stronghold. The current Sovereign, Duke Asher Silvarian, is known as a firm but fair ruler with a firm sense of justice which he tempers with wisdom of elected and appointed counsel and with compassion. While many responsibilities fill his plate, the well being of Silverhold and it’s citizens are and will always remain his top priority. 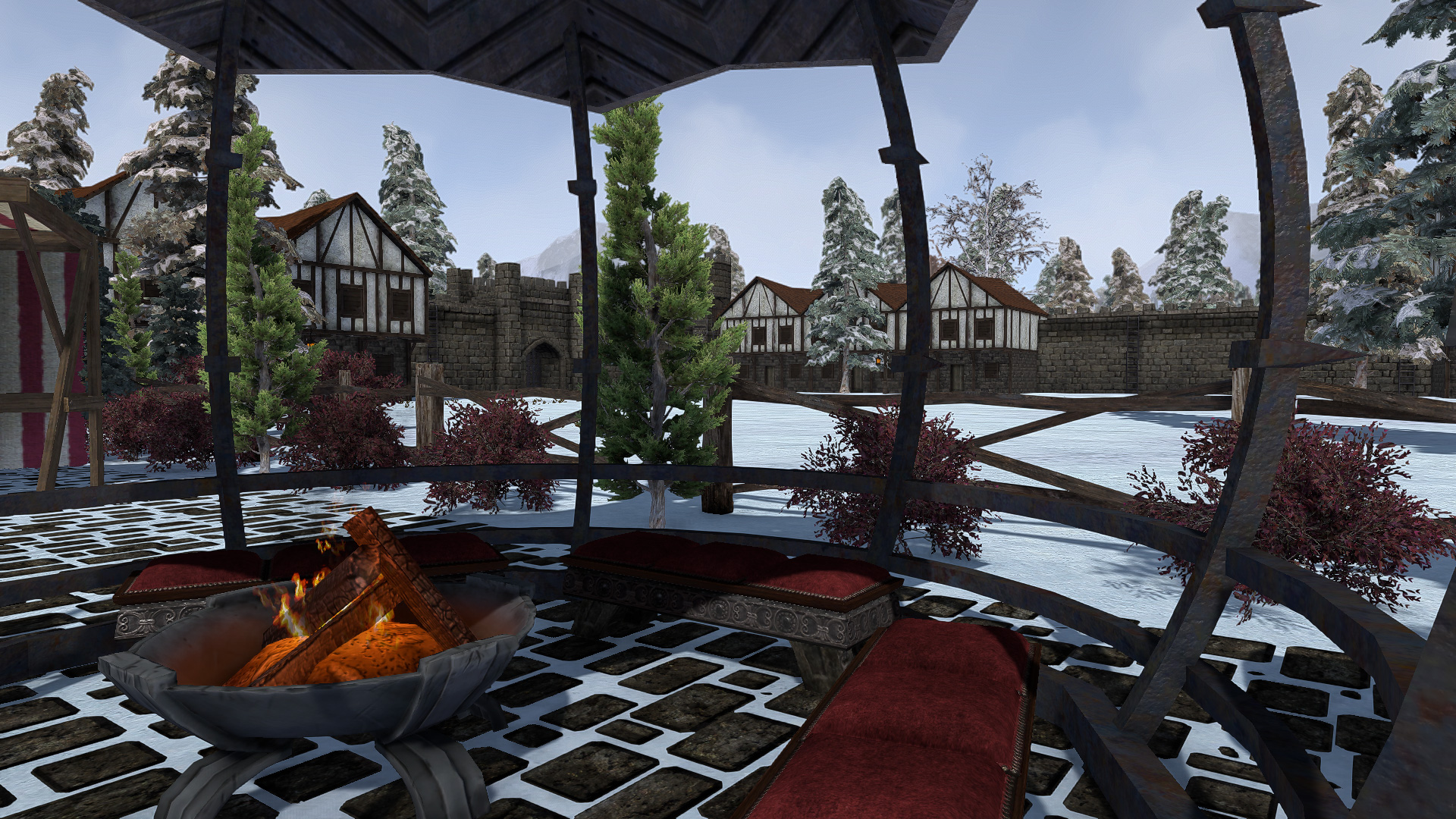 Silverhold is also home to the Army of the Phoenix Republic. The Army’s general, Alexander John, has his Headquarters within the citadel walls itself. Jenny Phoenixphyre, wife of the leader of the Republic, Kazyn Phoenixphyre, boasts a fine winter getaway residence in Silverhold as well. Founding members of the Silverhold Guard, Swaan Greene and his brother Esolde are of honorable mention as residence and close advisors to the Governor.

Sadly, even with these and other established names, recent wars which embroiled the Republic have left the ranks of Silverhold depleted. Thusly, there are ample openings for new citizens and recruits alike in Silverhold! Let this be a call to arms, your Republic Needs You! Know also, while membership in the Republic is not necessary, Silverhold residents may rely the good members of the Phoenix Republic for friendship and comradery. Phoenix republic members are numerous and can be found adventuring, crafting, and gathering online 24/7.

What is the future of Silverhold?

The future of Silverhold is currently aligned with the Republic. The garrison there is pledged to the Republic and it’s defense. This pledge, however, has not left Governor Asher Silvarian without ambitions of his own. He sees a bright future for Silverhold and a key role for the town in the future of Novian geopolitics as well as becoming a strong source of industrial production and supply for the many warriors and adventurers of Novia.

For those seeking political office, Silverhold has a fairly democratic form of government, with both elected and appointed positions (District, Judicial, and legislative leadership) available to members of the citizenry… (Active roles in government are encouraged as this will truly be a player’s town; player run, player driven, and player developed.)

What are the unique features of Silverhold?

Within Silverhold there are many features and attractions both in its various districts and the lands surrounding the province itself. Here are a few of those districts: 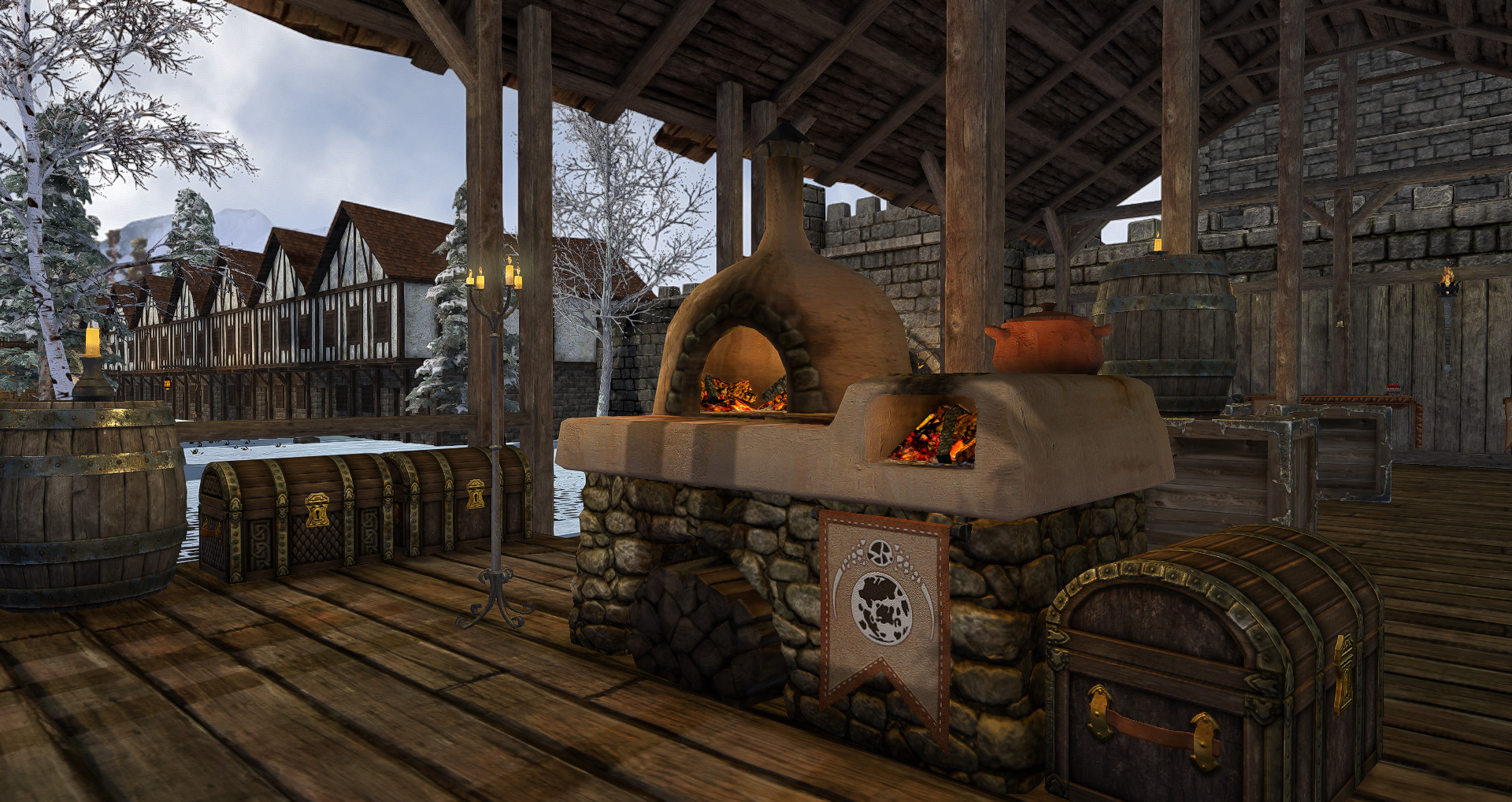 Full service Expert Crafting Stations are available along with several convenient merchant services here in the town center. Within the citadel walls, you will find the THE RUINS, a banquet hall where not all dinners live through dinner. This is an outdoor dinner setting boasting a ‘Front Row for All’ entertainment venue specifically tailored for live combat events. Crunch that char broiled set of ribs to the sound of breaking bones and smell of roasting flesh!

For those seeking a more leisurely evening, there is the Chilly Dog, a fine tavern providing the atmosphere of the old style pub found once in our lost lands of Sosaria.

Merchant Services are available here! Visit the provincial capitol building, formally named ‘Silvarian Keep’ but most citizens just call it Silverhold’. Tour the living quarters of Duke Asher Silvarian and attend one of the events nights at his personal subterranean arena, ‘The Pit’.

Three other districts are in the planning stages and open for viewing: Lakeside, The Woodlands, and The Tundra.

The lands surrounding Silverhold are rich with resources. Nearby are the The Crag Mines (Gold, Iron and Copper) and The Elysium Mines (Silver). Extreme caution is advised! Timber is in abundance in the Whispering woods, though venturing out alone is not encouraged. Contact your local garrison for an escort! 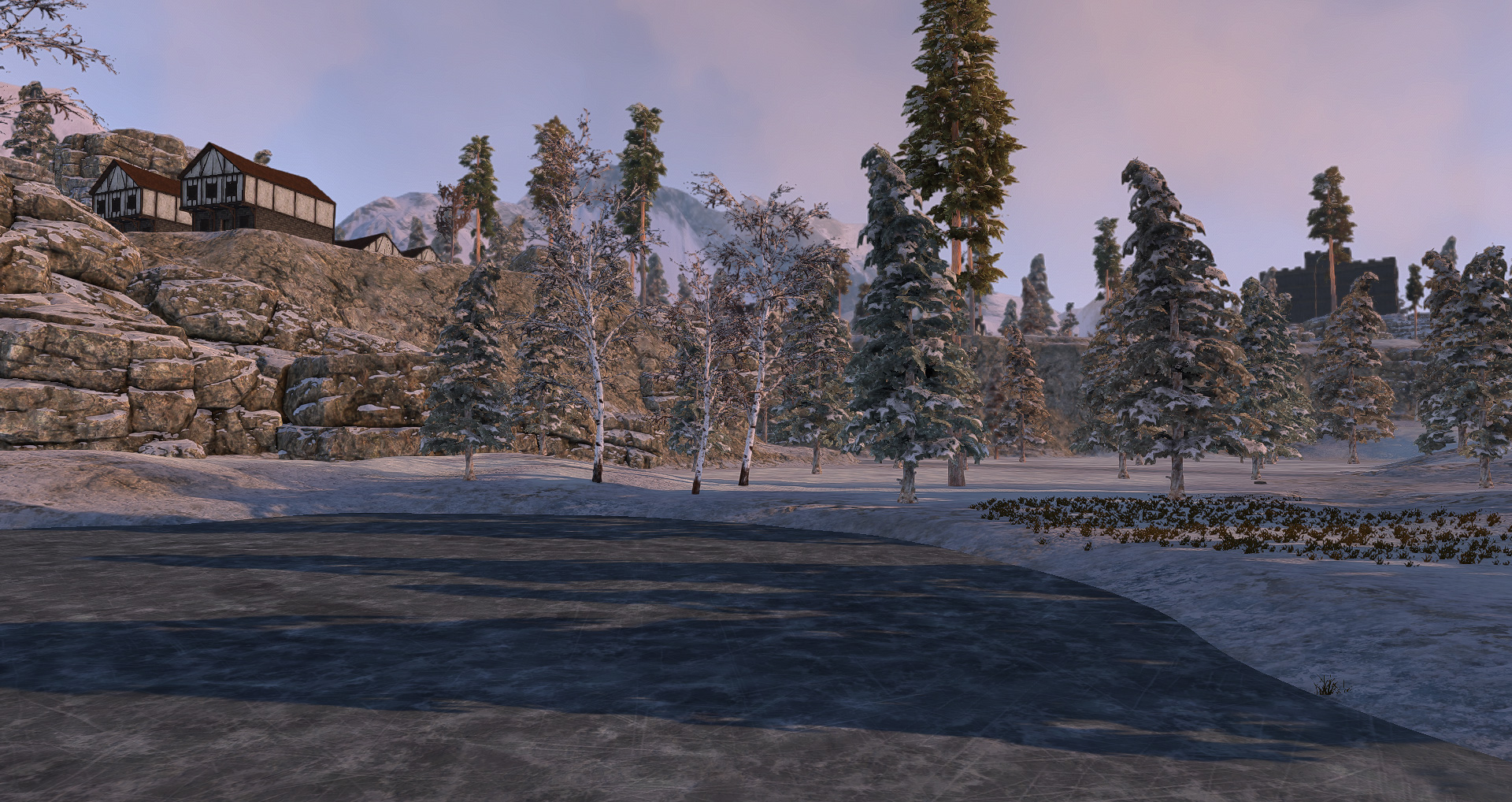 The densely populated and popular destination city of Xenos is located just a stone’s throw west along the coast from Silverhold. Far to the West are the unknown wonders and possible dangers of Artifice! Explore at your own risk! Across the Bay and accessible via a short sea-bound voyage, are the beautiful cities of Aerie and Etceter.

Elysium Bay is also home to many favorite fishing spots. Come find yours!

Do you have a Player Owned Town, Guild, or group that accomplishes and makes available great things for other players? Let us know! We would like to include your group in an upcoming spotlight. Just send Berek a brief proposal of what you have to show!

Lunch with Laz and Jack - we intepret the #SotA news so y...