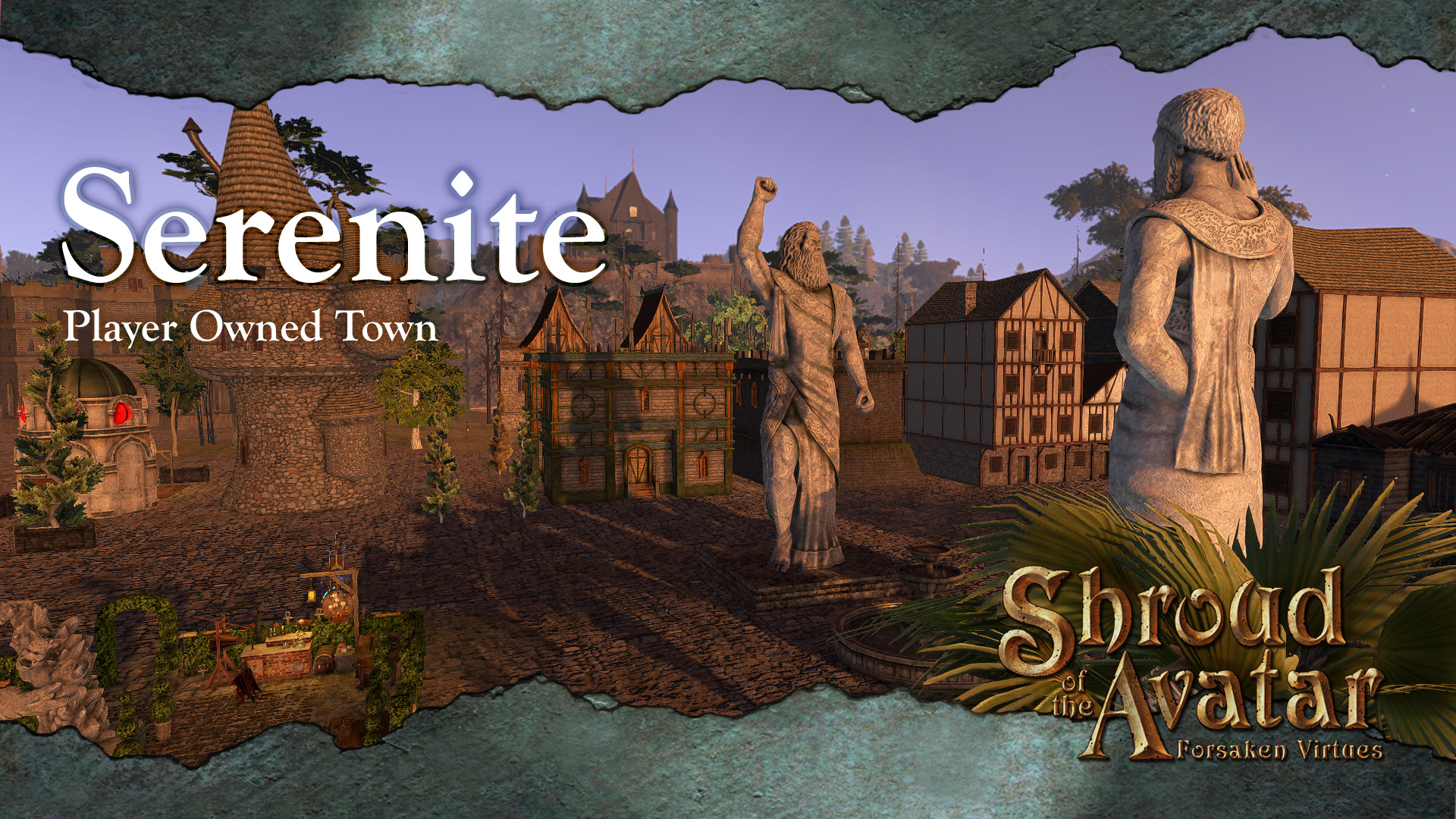 The third Player Owned Town spotlight kicks off with Serenite! We will be touring many communities and talking with their guilds and other groups in this series, all of which are open to be spotlighted on coming tours brought to you by Berek, your community wood elf druid. 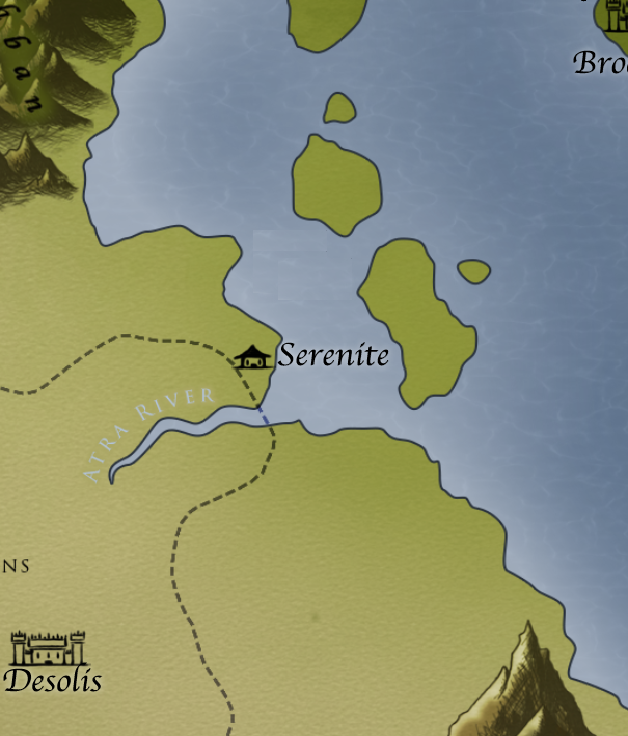 Close to Desolis, I saw a great many things in Serenite that drove me to write this spotlight. Here is what I witnessed:

As I neared this oasis in the desert, along the coast of Grunvald, the searing heat of the desert made my plate mail feel like a pressure cooker. Serenite is very easy to find. It is the first community on the road when crossing the east reach gap just up the coast from Soltown. If you are standing in Brittany, just head toward the desert and look for the coast.

William the Governor greeted me upon entering Serenite. He escorted me to his modest but still impressive castle for a drink, as the desert heat had parched my thirst. Castle Serenite is nestled atop a hill overlooking the town.

The temperature in the region was warm but humid, a true oasis in the desert: 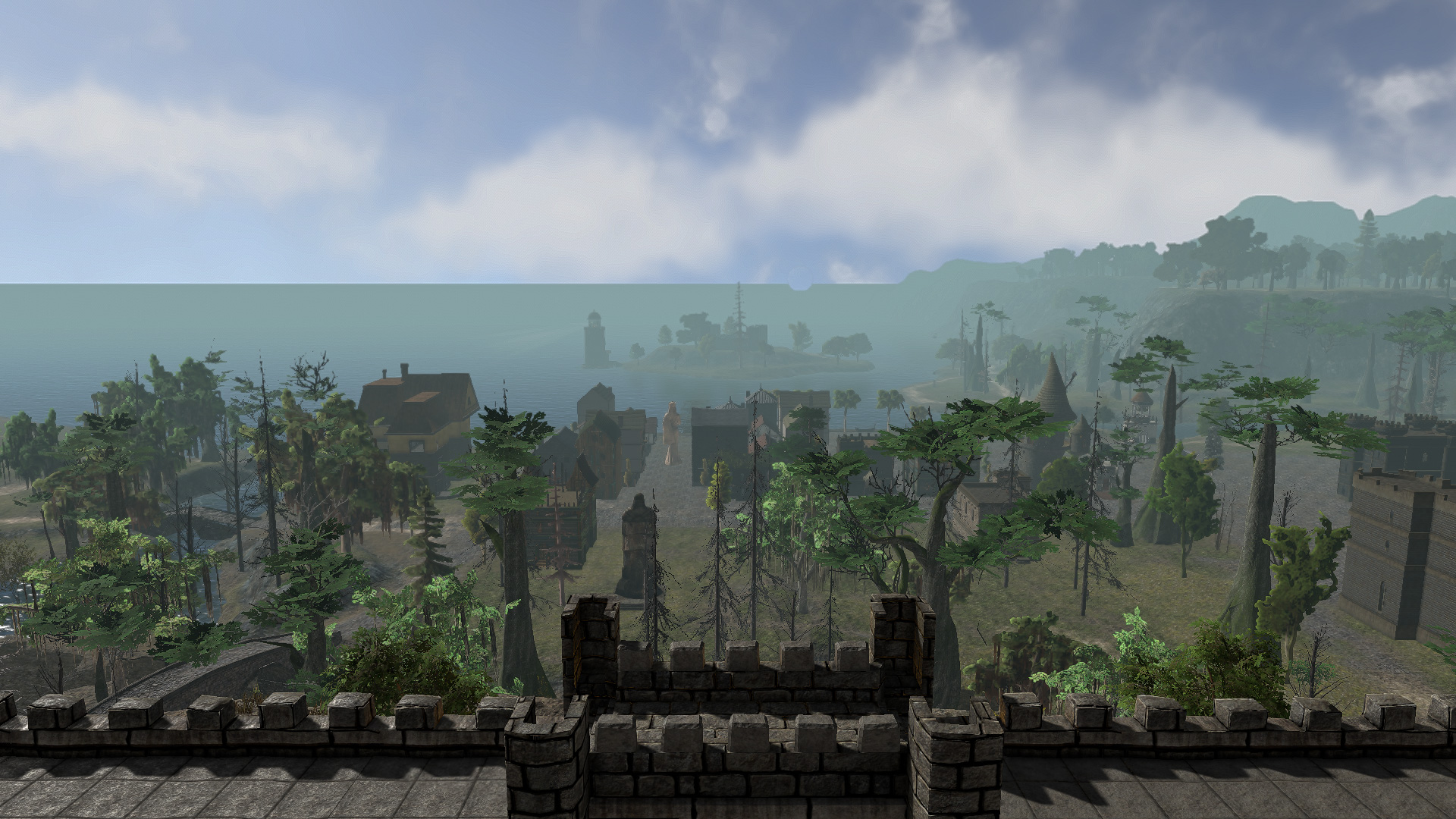 As we walked, I asked Governor William…

I’m intrigued by Serenite’s history. How did it get founded?

Serenite was once the port town for Desolis. When the dragons arrived and took over the area, the residents of the port town left it abandoned. We arrived looking to claim the lands and were greeted with creatures of all foul sorts. The Obsidian shards had a warped nature in very strange ways. It eventually took the combined effort of three Dukes and their armies to take the lands back from the chaos that had taken root in this part of Grunvald.

Being so close to obsidian shards, the residents are natural sorcerers and magic comes to them easily. The stones have also warped the minds of some of its residents. There is a legend of Kazgaroth, a once powerful Obsidian sorcerer that speaks of how the arch magus used these shards to control or possess others to do his will. 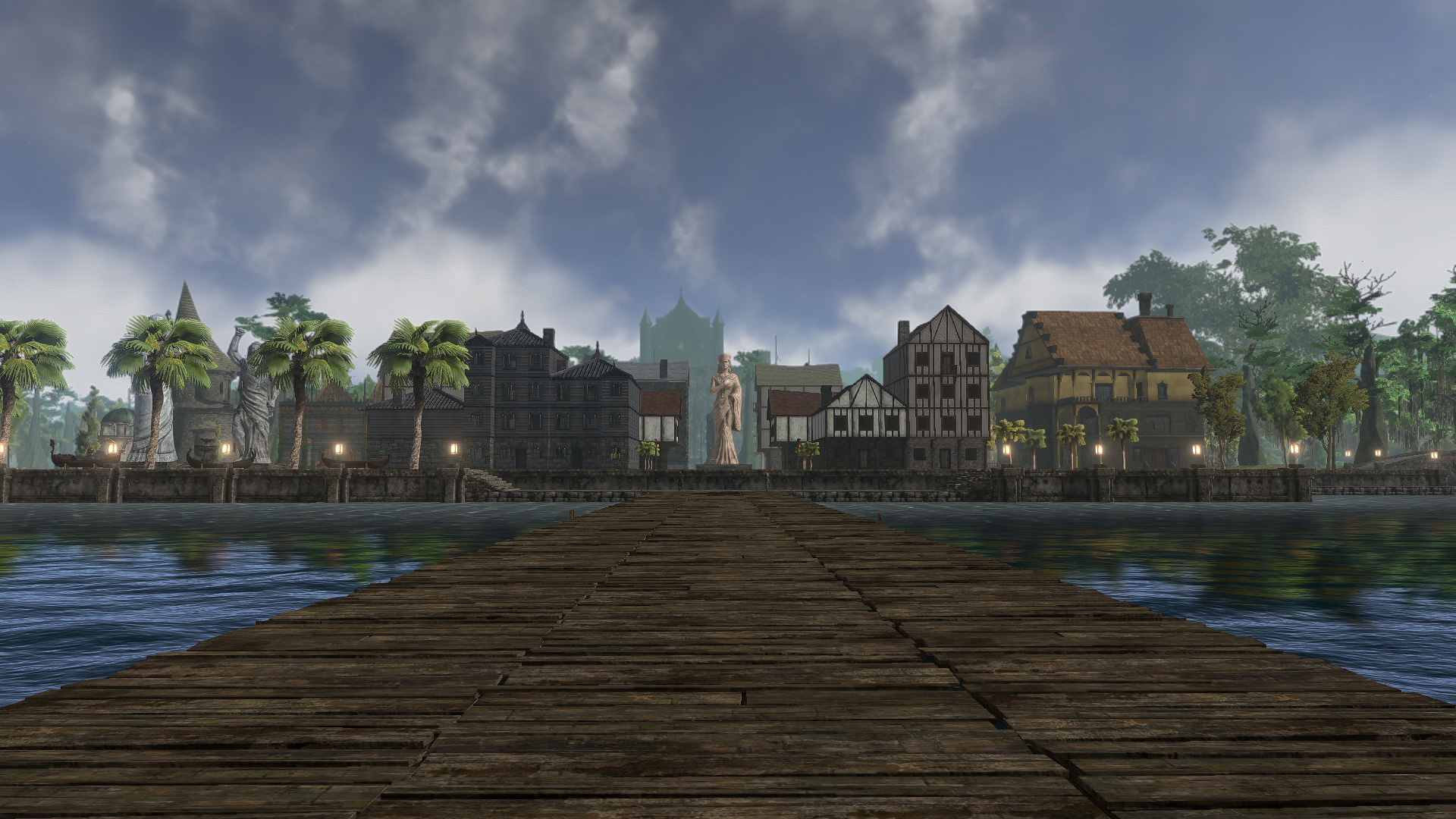 Who is welcome to Serenite?

Now Serenite has been rebuilt and is once again a thriving merchant port town on the eastern Grunvald shores. Our town welcomes any and all who want to be part of our community, be they adventures, miners, crafters, elves, kobolds and everything in between

Our army is always looking for strong bodied knights to defend our lands, as the area is plagued with dragons will prove challenging for even the most seasoned avatars.

With ease of access to four mines and a skip away from Brittany, Serenite’s location is favorable to both adventurer and merchants wanting to fill their pockets with gold.

Tell us about the residents?

The residents of Serenite are all from different paths. The highborn are the noble family and are part of the crown that governs. Because our town welcomes people from all walks of life, we are polytheistic, where our residents worship different deities. Some worship the Titans, while others worship the Oracle. We have a growing community of elves who worship nature, and our recent arrivals consist of an expeditionary force of Kobolds who worship the Dragon.

We all share love for our home and fellow Serenite’s, which is the virtue that binds us. We all seek council with the Oracle who helps guide us all along our paths.

What is the future of Serenite?

We are in the process of restoring peace to the lands of Grunvald. Our Army has laid claim over the Grunvald Shardfall and has been patrolling the lands with our most seasoned warriors. We have been able to best the dragons and ensure fealty for any trespassers caught. Those who do not swear allegiance to Serenite are put to the sword.

Serenite was and continues to be a merchant town and is a known trade hub for Novia. We are also getting ready for a grand opening event, where we will be giving away store credits and having all sorts of events and fun activities for avatars to enjoy. It is our desire to give back to the community that enticed us to reside here in Novia, with our fellow avatars. 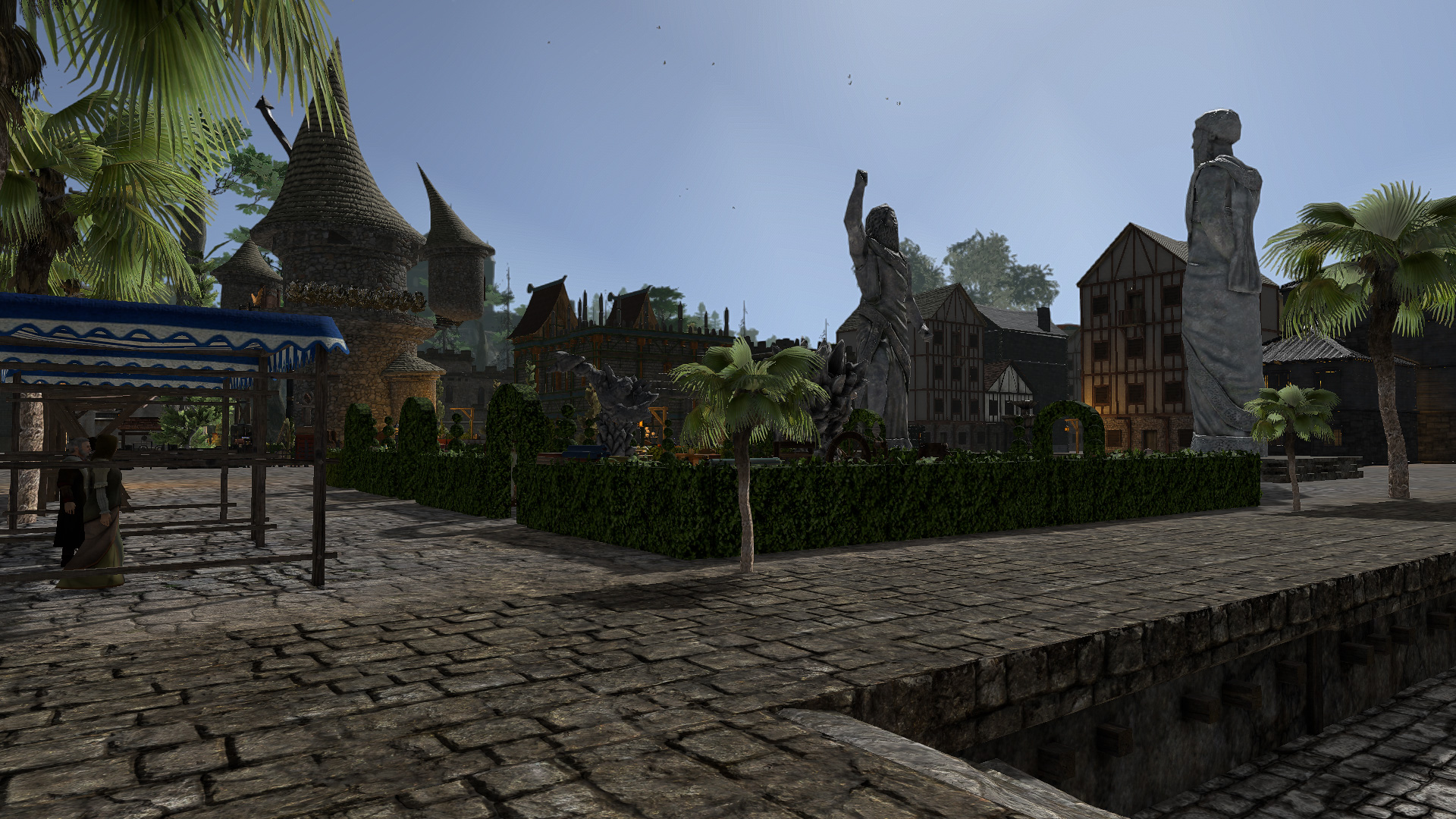 What are the unique areas of Serenite?

Serenite is primarily a roleplay community. Our roleplay activity like holding court is a tradition that we have designed to entice players to take on responsibilities and be rewarded titles and be recognized for their efforts. 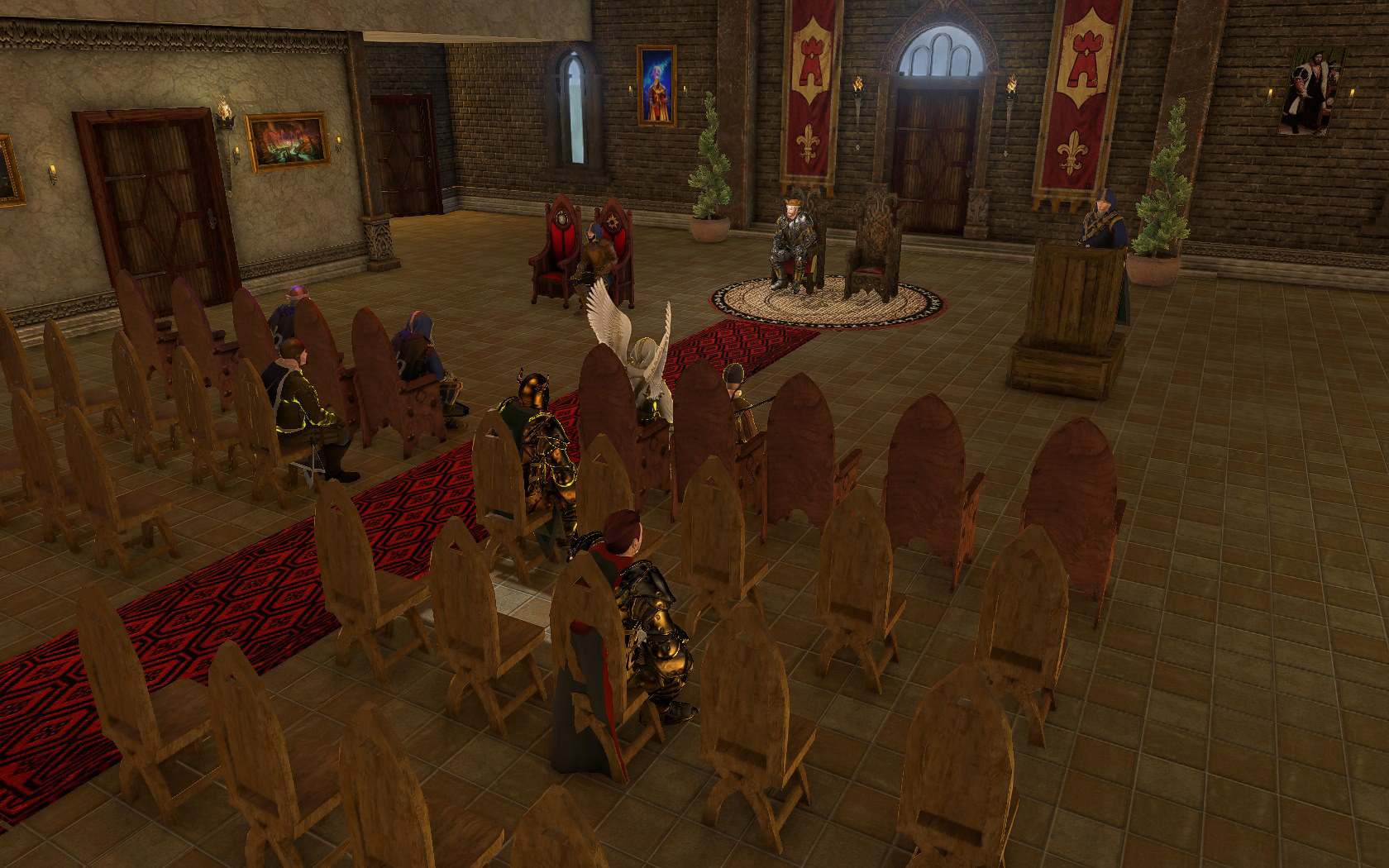 House Serenite, which is the clan that governs the town, has a vassal system which allows players who also own player owned towns to build up the area and associated guild. These governors are given total authority over their lands and can recruit and give titles to their own houses. This system is designed to help the governors trying to get some wind in their sails. Once said town owner gain enough residents and or house members, they have the option to become a “Major House” and form their own guild.

Anyone seeking to attach their town to Serenite simply needs to enter Serenite and roleplay the encounter with an officer and seek to speak to Duke William.

There is also the option of roleplaying a highborn and taking the Serenite last name. Highborn are in line to rule with the crown and scepter. The roleplay between highborn could and does get messy as the siblings wrestle to gain favor in the Duke’s eye over future control of Serenite. Those who show the virtues that our town embodies, will one day gain control of the land and guild.

Serenite Army also has a ranking system and members of the clan can gain knight status by defeating an opponent in a hostile situation, whether by open PvP or in a sanctioned tournament. Once you gain knight status, a warrior can continue to climb the ladders and further their station within the army. The most decorated knights gain special perks from our crafters, and are rewarded purses for winning in the tournaments. PvP is not mandated, indeed, many of our community do not get involved with PvP, but our army has many great players that would be happy to teach anyone interested in learning.

Last but not least, we have our Oracle temple, which was built by our Master Mason Jonah Hayes. The Oracle has blessed him with the knowledge of the Titans and and he has become a master of stone. Sheriff Shimizu Kitoku is the interior designer. 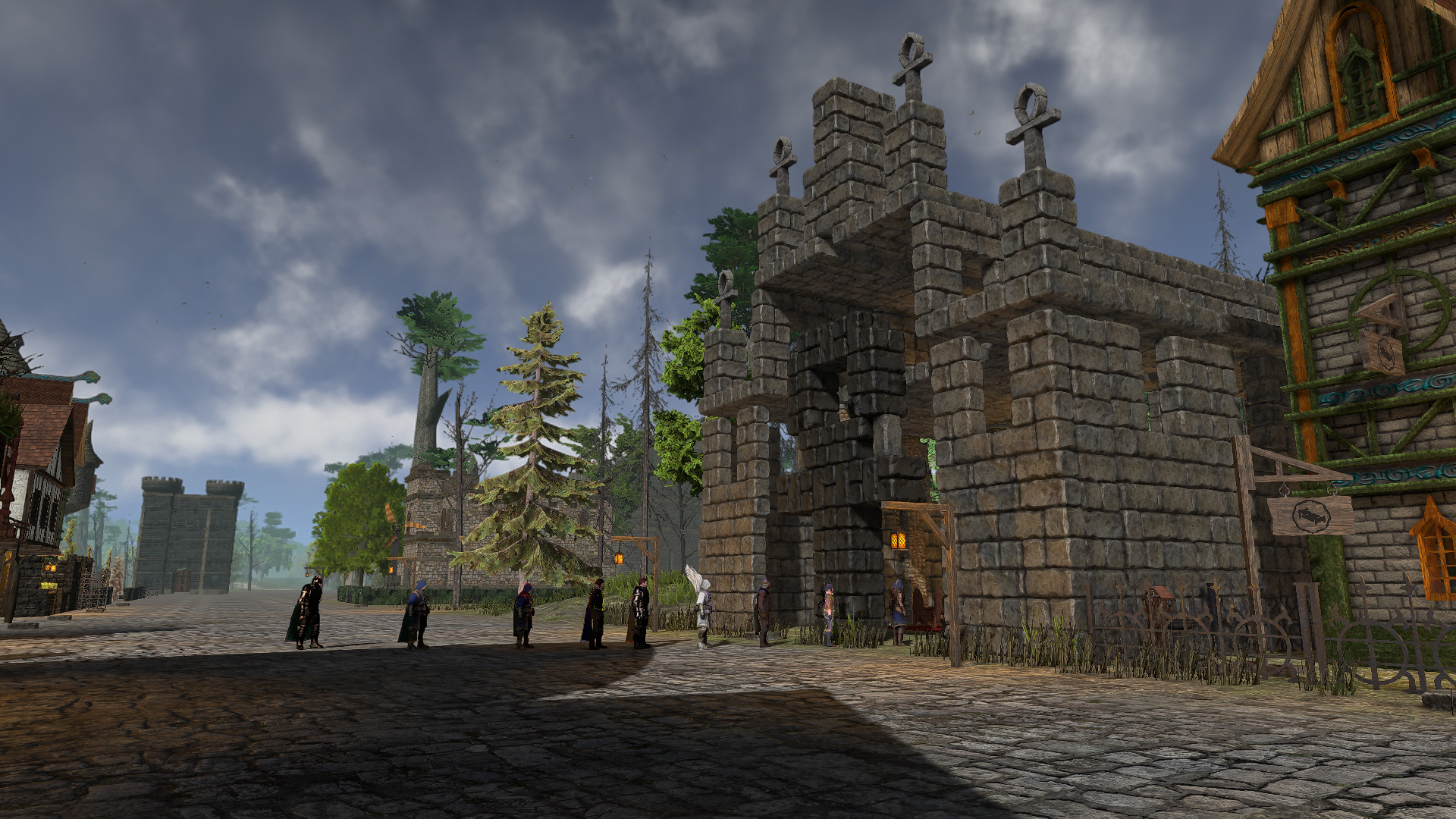 If interested in becoming part of the Serenite community, message them on their guild forums or one of their High Council below:

Do you have a Player Owned Town, Guild, or group that accomplishes and makes available great things for other players? Let us know! We would like to include your group in an upcoming spotlight. Just send Berek a brief proposal of what you have to show!

Wake up Wake up :) Good morning~