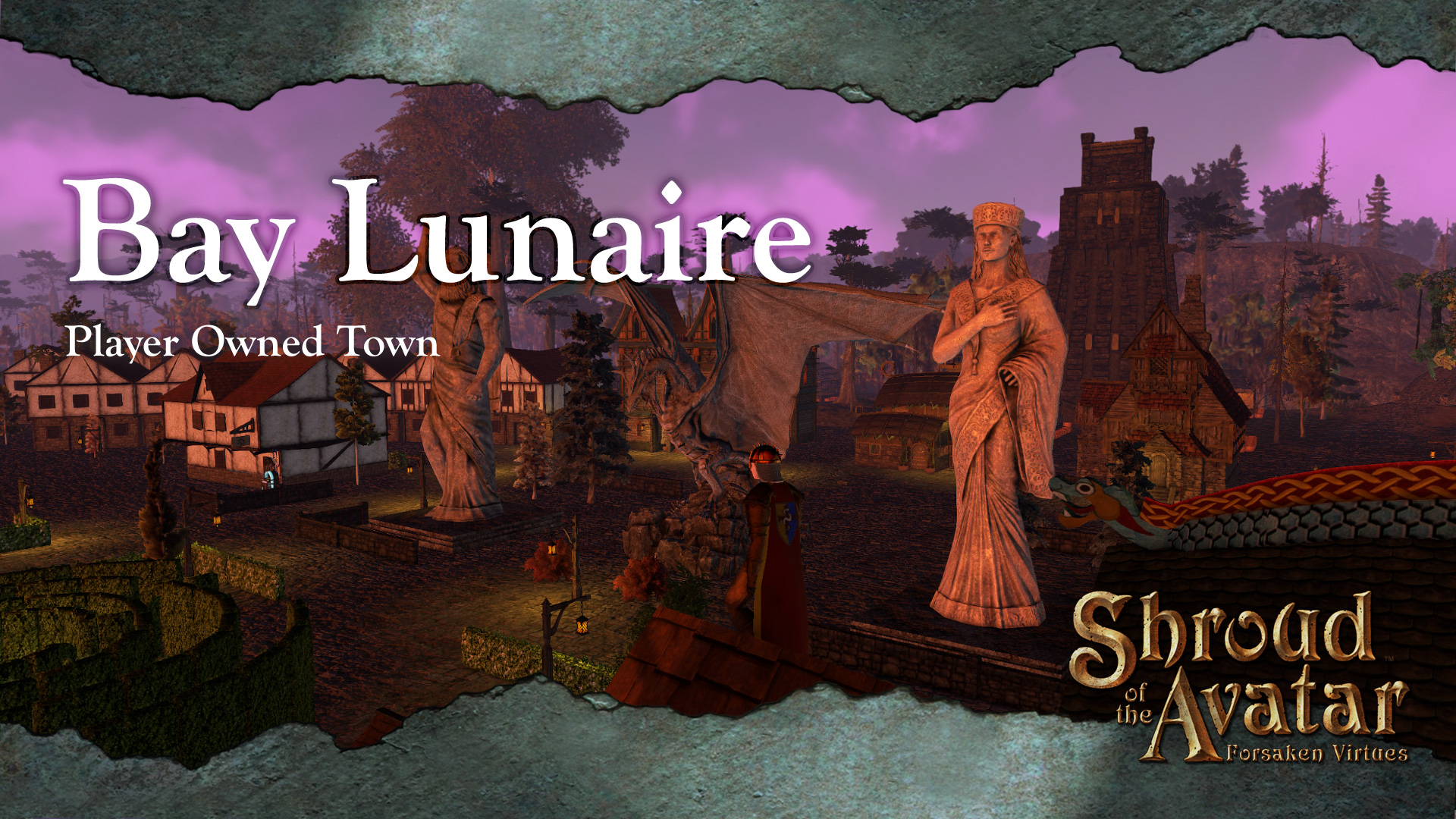 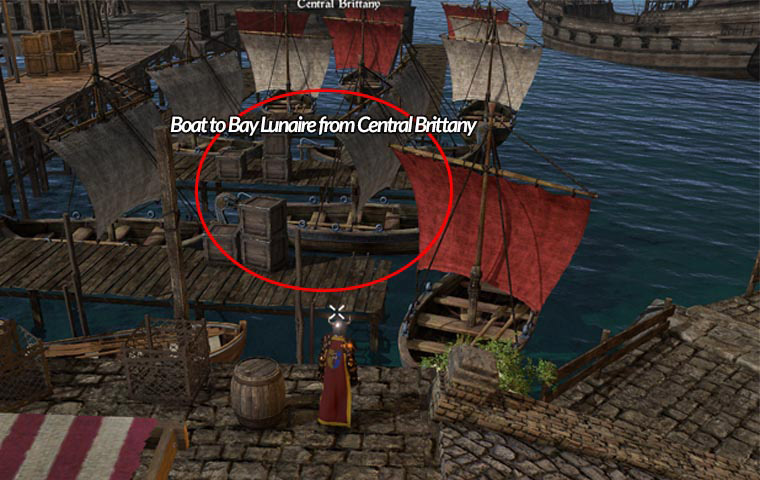 As told from a visit to the town by your community wood elf druid, Berek, Bay Lunaire is nested off of the docks in Central Brittany. The location is perfect for quick access to trade in some of the busiest areas in Novia, and to Kingsport from Central Brittany. Once you are in the town, it’s a breeze to get to all of Brittany’s neighborhoods with a quick boat ride from the docks.

Here is what I witnessed while I roamed this beautiful town that shares so much of the life that nearby Brittany has to offer:

Entering into the Bay Lunaire, I arrived at the docks by the Town Crier and Banker. Titania Xylia, the town Govenor, greeted me by wavering her hands wildly from a distance. She quickly escorted me inland toward a beautiful display of seaside statues.

Just a few steps into town the tax free vendor is to the left where all residents get to list items for sale commission free. This vendor is accessible to all residents for listing their goods. As more choose Bay Lunaire as their home, additional vendors will be added near the dock allowing for easy trade and less anxiety about lot selection.

Directly across the street from the tax free vendor is a crafting area with expert carpentry, blacksmithing, alchemy and tailoring stations to go along with the rest of the normal crafting stations. Within a few steps residents can conduct all of their business and still get in some time for a great fishing experience.

There is a also a beautiful central park near the tax free vendor with a descriptively small (and dangerous) maze. The paths through the maze will be updated occasionally as events are conducted through it. For those brave enough to adventure into its depths, there is a public cache chest at the center with random goodies that anyone can take or contribute too. I threw in something special during my visit. 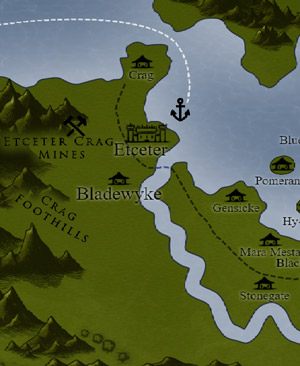 As we walked, I asked Governor Titania…

Why was Bay Lunaire founded?

I founded Bay Lunaire to build a deeper connection to the in-game community and provide an open space that anyone can live in. I wanted a town that would be service oriented and focused on making life in-game as easy as possible. It’s one of the interesting aspects of living in a player owned town; you get to craft a living experience that’s by the players for the players. I seek to incorporate resident feedback regularly back into the design of the town.

The first goal was to create a place with a layout that was a little less grid-oriented. You will find arching streets that give you a unique view of player housing and the town’s common areas. I wish I could do more along those lines, but I think I’ve made as much progress as I can on that front. The town is move in ready finally. It was a lot of work!

Regarding founding Bay Lunaire, the former governor, Lord Sewyn, needed to retire from his duties as governor of the Swamp of Sorrow and was looking to pass on the town to another interested player. I quickly jumped at the opportunity. It’s an interesting challenge that I don’t believe exists in any other game. It’s a totally different type of community that can deepen relationships between friends, guild members and creates the new relationship of governor and resident.

Who is welcome to reside in Bay Lunaire?

Everyone is welcome (Bay Lunaire is a PvE area)! You do not need to be a guild member to live here. Every lot is open access save for a few special requests. This is one of several towns of the Lunar Dragons, but more guilds and players are welcome. Living in Bay Lunaire, you should find there are few restrictions placed on residents, as the town is not intended to be exclusive in anyway. I have gone as far as changing the town’s layout to meet residents’ needs on a case by case basis. It was great being able to accommodate resident feedback. It improved the town a great deal!

Tell us about your residents of Bay Lunaire?

The residents are an eclectic bunch with varied interests. The town is still very much in its growing phase, but you will see many representing Lunar Dragons and EVL guilds. There are craft focused players, adventurers and PvPers who will host PvP one-on-one or tournaments. There are even two basements dedicated to PvP including my city arena basement.

What are the more unique areas of Bay Lunaire?

We have a cozy town with easy access right from the docks to the varied vendors, crafting stations, and a nifty public treasure maze. I wanted to fashion a lot of areas as a park. Bay Lunaire is a swamp biome and has many dark paths with rich scenery. There is a grand Yew tree near the current back border. In the center of town, there is the statue park including the statues of Courage and Love bordering a city sized dragon statue. Just to the right of the statues is the guild home of the Lunar Dragons, who also reside in Elad’s Lighthouse, Vale Halla, and Crossroads.

I have personally enjoyed the fishing around town when I have needed a little time to relax.

Residents can choose to have their lots anywhere on the map that I can place a marker, as long as it doesn’t inconvenience the rest of the community. I would be happy to host more guild houses as any requests are made!

What is the future of Bay Lunaire?

Bay Lunaire will grow into a metropolis sooner rather than later. That’s my primary focus for the town, as well as becoming a great guide to the game to new players or those seeking the most challenging adventures New Britannia can offer!. 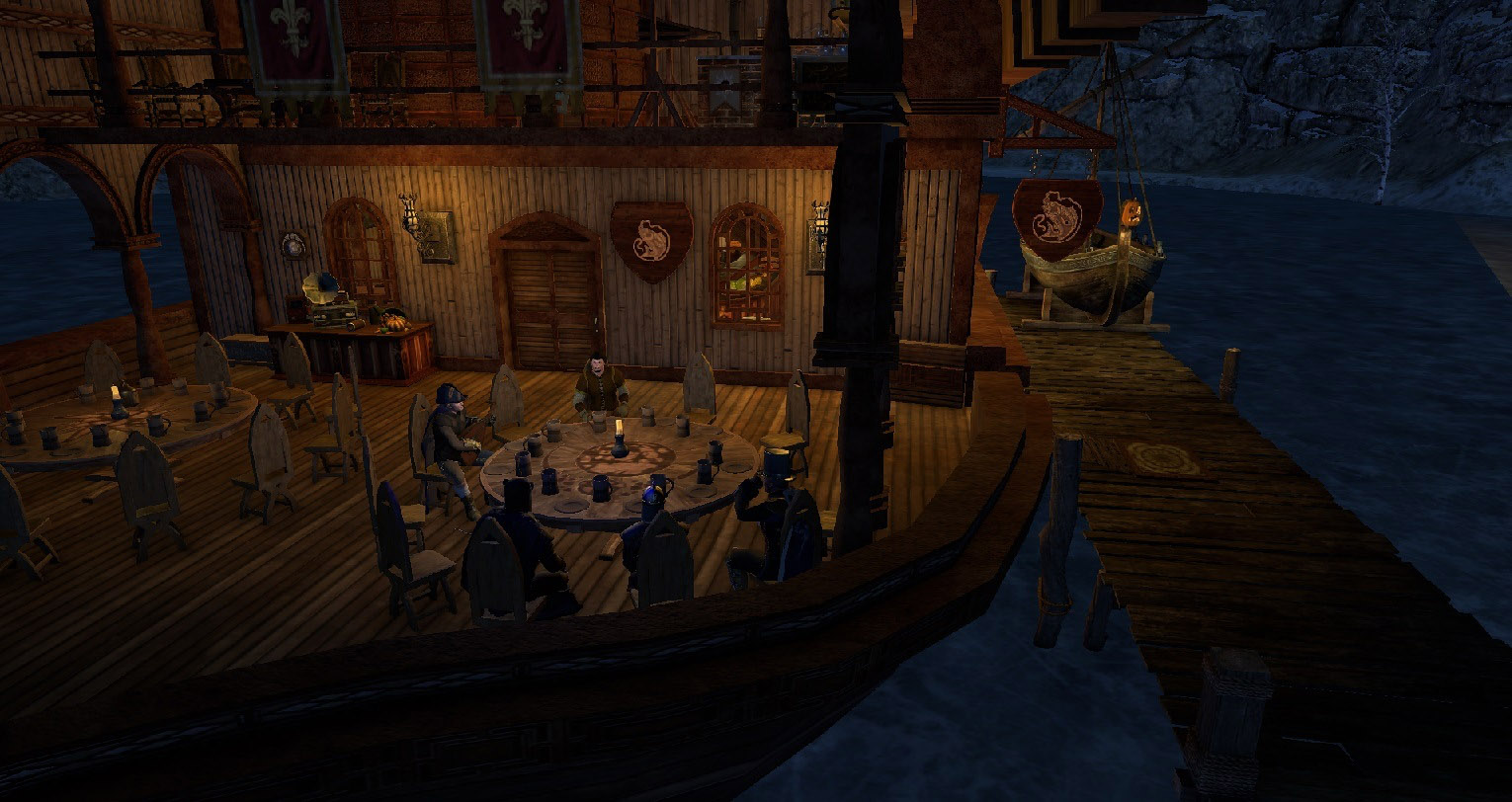 If interested in becoming part of our community, simply drop by and claim your lot or speak with governor Titania Xylia in-game, or you can message tbranch in the community forums to ask any questions out of the game.

We will be touring towns and talking with guilds and other groups, all of which are open to be spotlighted on coming tours brought to you by Berek, your community wood elf druid.

Do you have a Player Owned Town, guild, or other type of group that makes available great things for the community? Let us know! We would like to include your establishment in an upcoming spotlight. Just send Berek a brief proposal of what you have to present!