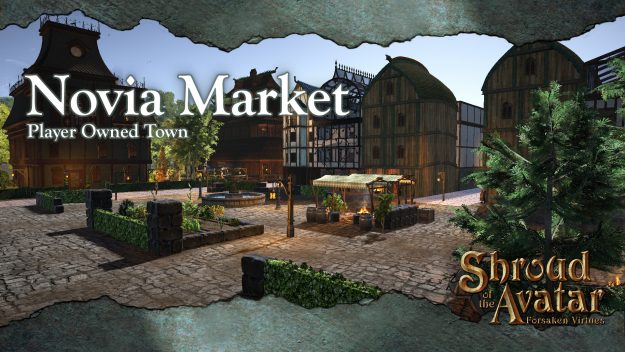 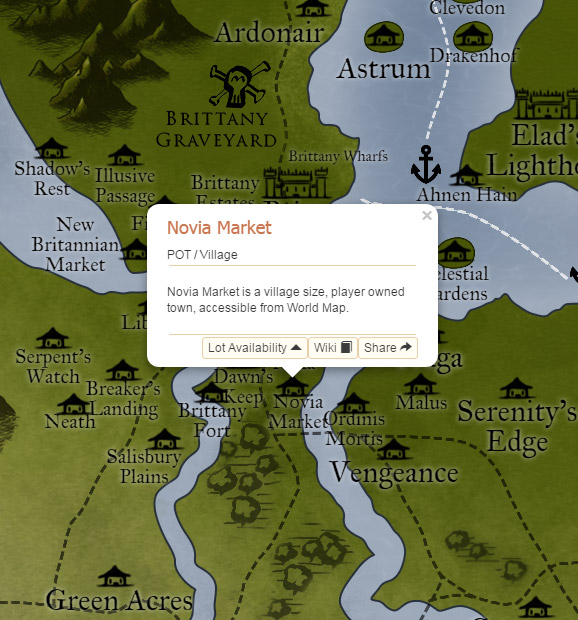 This week’s Player Owned Town spotlight has me, ‘Berek’ as I go by in the community, travelling to the center of New Britannia to visit the bustling trade town of Novia Market.

Many of the fair towns in New Britannia have built a strong, steady popularity and long history. By contrast, I had heard rumblings of a young upstart of a community of 50+ merchant residents which seemingly had popped out of nowhere, in the southern hinterlands of Brittany called Novia Market.

I had seen flyers for Novia Market proclaiming each and every Sunday as a “promo day”, and it piqued my interest enough to start a short pilgrimage to the town. Upon reaching the entrance to the town, I was struck by two things: the hustle and bustle of the community, and an odd couple of gentlemen laying wait to greet me beside the town crier and banker at the entrance. 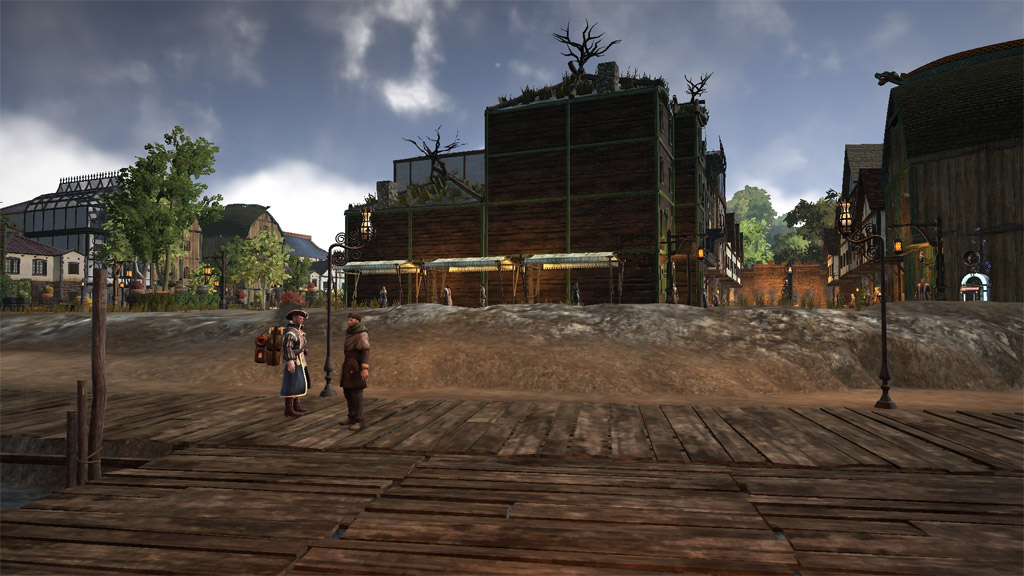 On one side, Bamboozle was an immaculately dressed fellow with a passionate gleam in his eye and a pile of architectural drawings under one arm. On the other side, Benjamin Hroth was a little more sloppy of a chap with a clipboard, ledgers, abacus, and an organizational tome in tow. Both welcomed me heartily with loud voices that carried a long distance.

They explained that while Novia Market, or “NoMa” as they insisted on calling it, broke ground only two Britannian years ago, it had been planned for at least four more years. The community was inspired by a single guiding principle, as Ben put it: “NoMa is all about an easy and fair purchasing experience for New Britannians.” Bamboozle reiterated this, describing many overpriced merchants throughout the land that felt out of touch with the growing population of new Outlanders arriving from the Isle of Storms: “It was time to build a community dedicated to the buyer.”

Ben first guided me to a small alley just west of the entrance to town, which he called “Promo Alley.” He explained that Promo Alley was inspired by Lace Delamorte’s town of Diamond Fields, which featured a highly efficient town center for crafters. “Lace was so generous with her time in organizing events like a mentorship program for craftspeople. Even as an amateur craftsman like myself, it’s amazing to see how well Lace understands the perspective of a crafter, as the entire town center is built for crafters by crafters.” 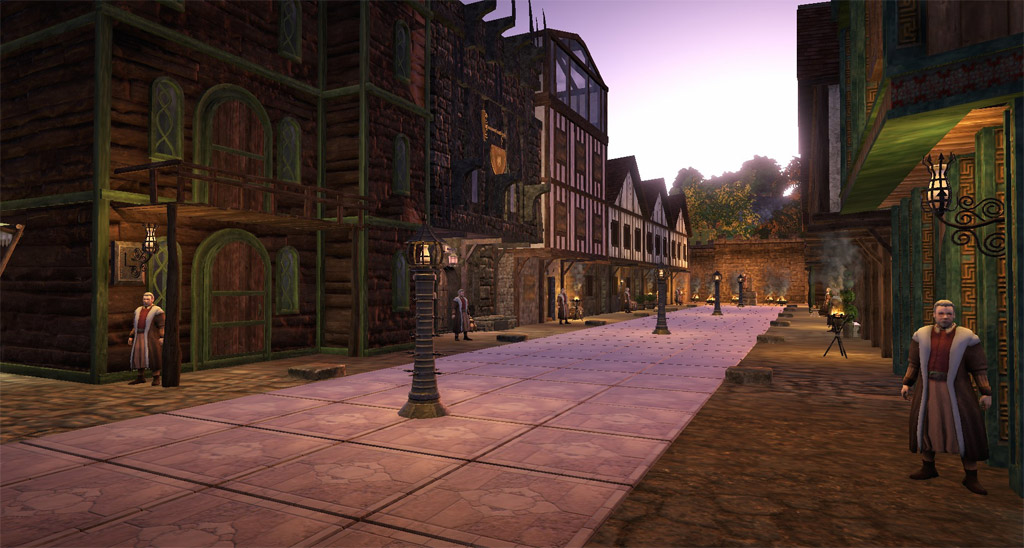 Ben then explained that, likewise, Promo Alley was designed for buyers. “We delivered a business plan to several prominent and fair sellers who deserved a larger limelight for their works. We use the principles of simplicity, curation, and promotion to ensure Promo Alley provides everyday low prices for Twelve Novian categories, but also regular “promotions” or low priced limited quantity sales each and every Sunday around the clock.” I asked what Ben meant about sales around the clock and he explained that Outlanders had certain “time zones” they were attuned to, and NoMa was dedicated to reach buyers from any time zone.

I was a little amazed; Ben was talking about hosting these promos each and every week on Sundays, and around the clock – how could he do it? Ben answered that he was blessed with an excellent team in Promo Alley. “Buyers need to be able to count on us to provide these promos near religiously every Sunday, for them to be effective and help spread good word of mouth of our community in NoMa throughout every time zone. We don’t know of any other regular New Britannian event available across every time zone. I couldn’t do it alone, but we have a great team of merchants who are excited to bring them every week in Promo Alley!”

I walked into Promo Alley with Bamboozle and Ben, and noted each of the Twelve vendors lining the side of the alley, including: Crafting Supplies by Illiott, Scrolls and Potions by Kron Caledon, Weapons by Robyn Hood, Armor by Adam Crow, Ore by Grizelda TheHag, Wood by Elrond KingOfElves, Farmed Goods and Reagents by Thexedor Markhamm, Food and Drink by By Tor, Artifacts and Loot by DevilCult and Rares by Bamboozle.

What struck me was that signage for each category of Novian goods was clearly marked, they were all conveniently located in one place, and a great team was at work working together to keep each category well stocked.

Ben explained Promo Alley is a cross-guild, cross-city, cross-continent effort: “My guild is Spoon’s Lux Rifthikers, and Bamboozle is in the Havoc guild. We have a great sampling from PRISM, Moongate Travellers, Lunar Dragons, Serenite, Night Walkers, and some unguilded members as well. Some of us lay resident in Spite, Diamond Fields, Beregost, Serenite, Dawn’s Keep, Owl’s Head, Lux Sanctuary, and Kiln. What we have in common is a dedication to bringing the best prices for buyers everywhere!”

It was very convenient to window shop and see all that they had to offer. At the end of the alley was where the crowd this Sunday was gathering. I could not believe the prices being posted there. The crowd was responding with the excitement and bustle of trade! I instinctively reached into my purse to grab a few of the deals… 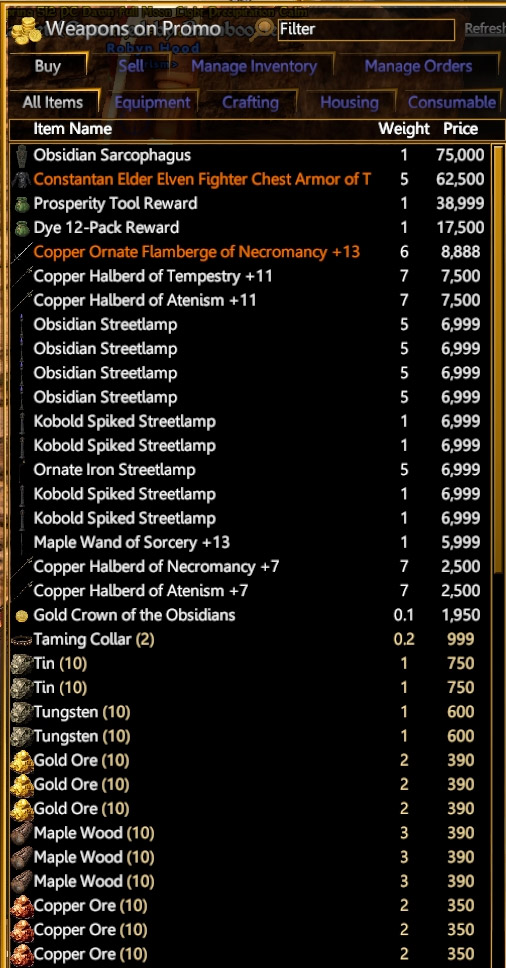 A sampling of Sunday’s wares

Ben concluded as we walked out of Promo Alley: “After arriving here from the Isle of Storms, I was struck by how difficult it was to afford gathered resources and crafted pieces from more faraway locations. It made life discouraging, and I wanted to bring changes for our new visitors. NoMa is dedicated to making newcomers welcome to engaging the economy as a buyer. It’s all about bringing good value to Novia!” 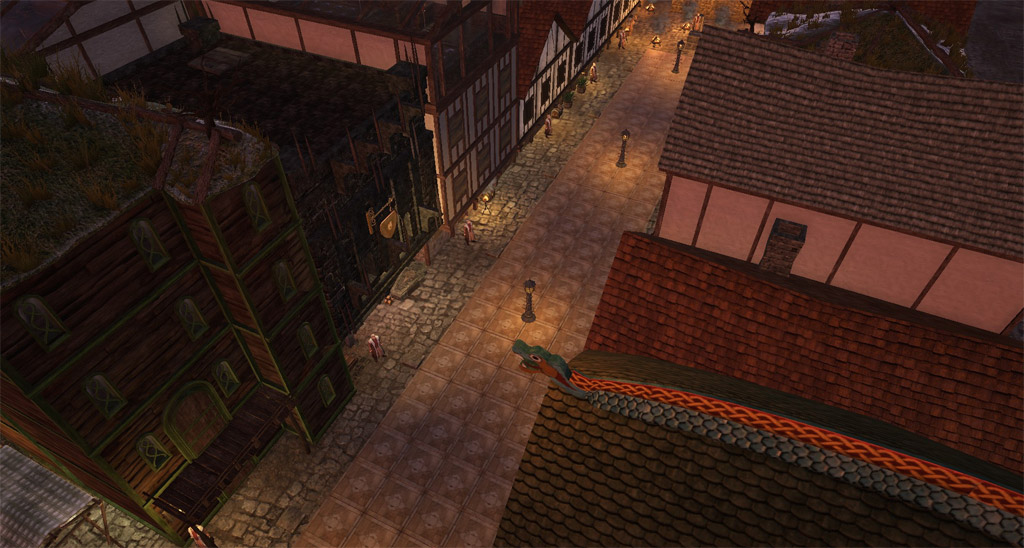 Overhead shot of Promo Alley in early morning as vendors put out their wares.

At this point, Bamboozle lit up, interrupting with “It’s not all about the good values, Ben. We not only do good, we make it look good too!” as we walked into a beautiful town square to the south of Promo Alley. Bamboozle explained that besides Promo Alley that Ben managed, the rest of NoMa was called “NoMa Village” where the residents made their home. Bamboozle danced around pointing out all the features of this first town square, calling it the NoMa Village development. 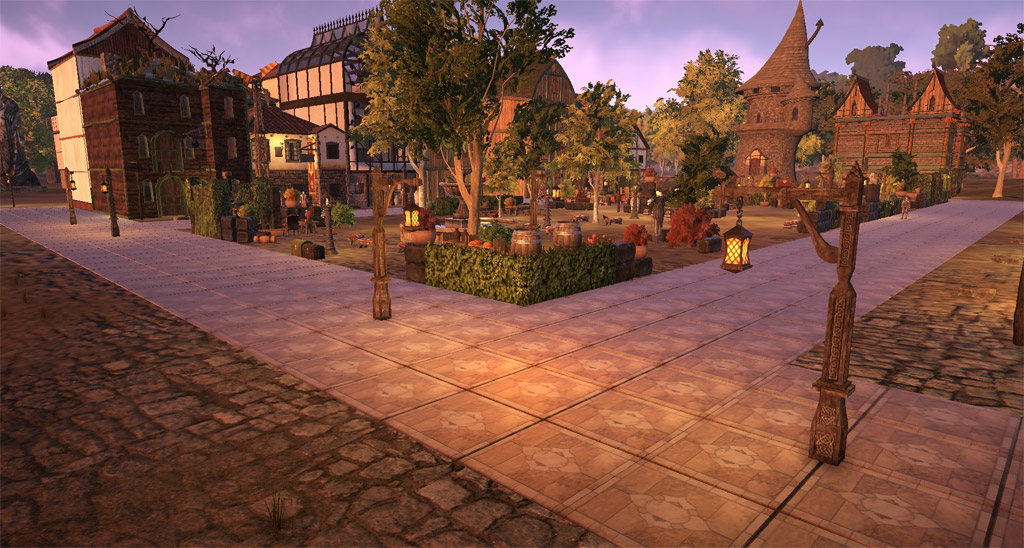 “Each of the NoMa Village developments are town squares built to create an easy vendor browsing experience – just follow the straight paths – as well as convenient living for our residents, for example the Oracle Confirmatory located near the entrance, automated merchants close to houses in one area, crafting merchants near the crafting square in NoMa Village I, and so on.” Bamboozle also pointed out that in two short Britannian years, forty-three vendors had moved in among the three NoMa Village developments. 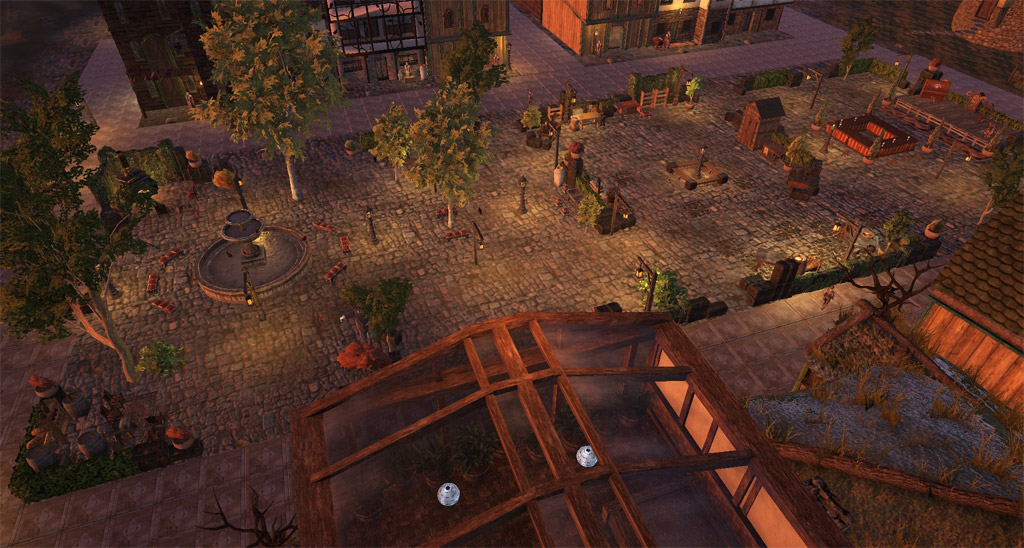 NoMa Village looked immaculate from the beige marble pavers, to the ornate street lamp, to the wonderfully decorated squares. “Lord British himself remarked that NoMa was a beautiful place!” 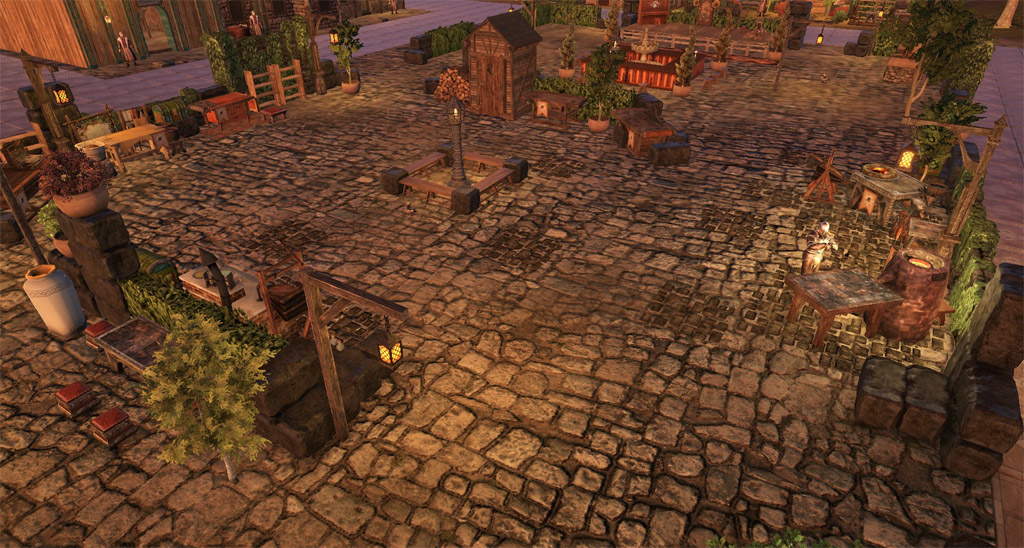 A stylish stage in the center of NoMa Village I adorned a full deck of instruments for musical interludes. Around the square were many row houses and village lots, and the theme of commerce and fair pricing were common among each vendor at each lot. 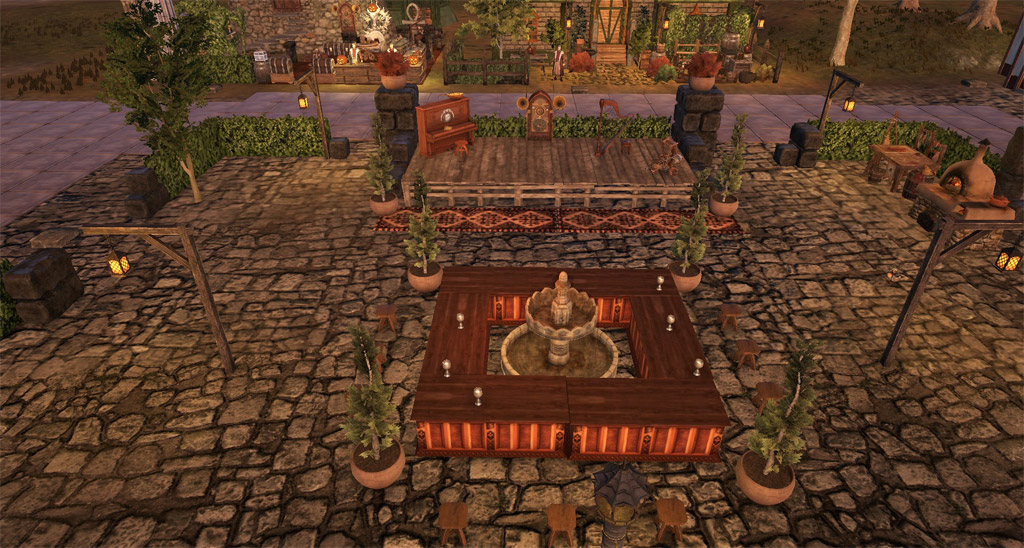 South of NoMa Village I was NoMa Village II, the second square. Bamboozle explained that NoMa’s instant popularity for residency meant a second development could be raised quickly. In the center of this town square was the beginning of an arena, and an unusual looking building. Furtively, Ben pointed out that there was rumor of a gambling den being built as well. 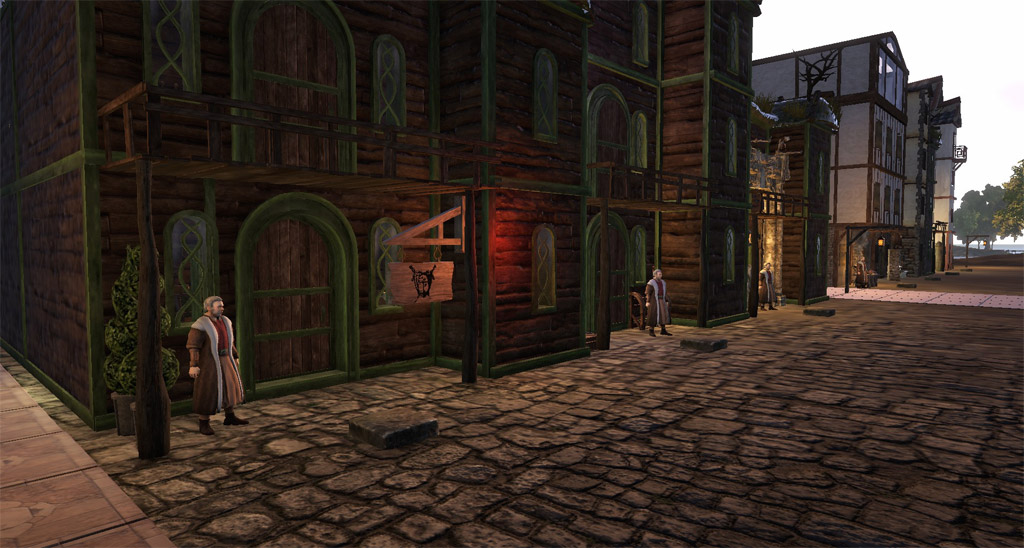 South of NoMa Village II was NoMa Village III. Bamboozle reflected about the town having recently undergone such a surge in population that it was upgraded with a third town square. Plans had already begun to build out a fourth square north of Promo Alley too.

With interest piqued around Lord British’s comment, and a possibility Shamino might move in, I started wondering aloud if I could open up a shop in NoMa. Bamboozle smiled widely; “We just broke ground and are accepting new merchants to move into our next development north of Promo Alley. All are welcome to apply via a message to me!”

After the tour of NoMa, Bamboozle and Ben thanked me for coming to their marketplace. Clearly, it was a town that had many ambitious ideas in-store for Novian commerce. I made a mental note to return later to watch the progress, and marked my Sunday calendar every week to make a quick trip for bargain hunting!

There are so many towns to explore throughout New Britannia. If you are interested in becoming a part of the Novia Market community, feel free to contact Bamboozle in the forums with any questions you have!

Do you have a town, guild, or other group we can spotlight? Message Berek with the details!

Notice me Senpai, I am a good guy, I promise!

Who wants to play Shroud of the Avatar? Taking a deep div...