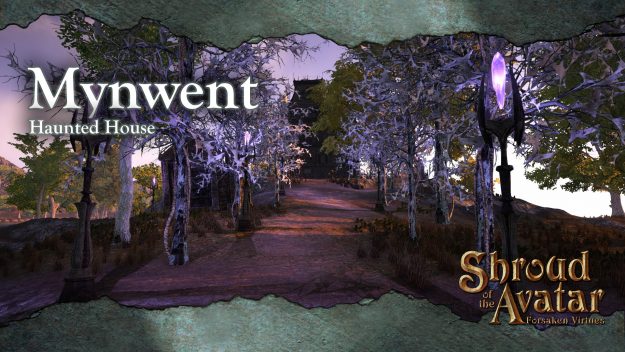 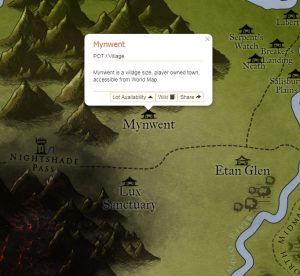 This week’s spotlight takes us to the Player Owned Town of Mynwent to the Mynwent Haunted House. Here is the town’s story as told by community manager Berek:

In my latest travels amidst the towns and peoples of New Britannia, chance would have it that my path lead to Mynwent. Surely, this was an opportune time for me to resupply before braving the dangers of Nightshade Pass, but as misfortune would have it, my attempt at respite inadvertently exposed me to an even greater danger. At first glance, Mynwent was an inviting town, but upon closer inspection my realizations horrified me. One might think me mad for saying this, but the town of Mynment has a dark history, and deep within its borders lies a house, so haunted, that I barely escaped alive to tell you this tale, oh Outlanders!

So take caution upon your travels to Mynwent, and heed my words! Make resupply in Etan Glen, perhaps Britanny, for the horrors you shall face in Mynwent are not worth the bobbles and trinkets you might procure, and likely, anything you might acquire from this forsaken town is cursed by the depraved spirits still lingering within.

And to further dissuade you, friends, I shall share with you a story. A story so tragic that perhaps it will overwhelm your curiosity and thankfully allow for good common sense to take hold. Read on only if ye dare, adventurers, for this wicked tale is one of great sorrow…

The Great Siege of Mynwent: 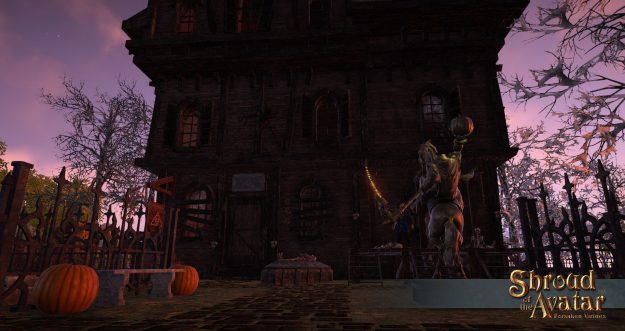 A Long Time Ago… Through evolutionary events, the Brittany cities amassed great wealth. However, the great wealth also created much desire and greed amongst several races, most notably the Elven, Kobold, and Liches. Battle Plans were forming. The Northeastern Elves wanted the lands of Mynwent for their beauty. The Kobolds wished to extend their northwest trade routes to a place closer to Brittany, such as Mynwent. The Southern Liches wanted to convert everything to evil because Brittany was a threat to them.

The greed was so strong, and the three races separately formulated plans to attack the suburbs of Brittany at the same time. A Fierce Battle ensued on the outskirts of Mynwent between the Elves, Kobolds, and Liches. The Elves lost because they were from a foreign land called the Hidden Vale and didn’t establish a proper supply route. To stage a war and win, one must provide total commitment and receive a steady supply of soldiers. The Kobolds lost by foolishly launching simultaneous attacks upon all cities surrounding Brittany, spreading their forces far too thin.

The Liches were smarter. They stockpiled enough resources to carry out a proper siege, and the Humans living in Mynwent only maintained a 30-day supply of food based upon previous needs. In total darkness, the Liches surrounded the town and cut-off all supply routes to and from. Then, the Liches waited… 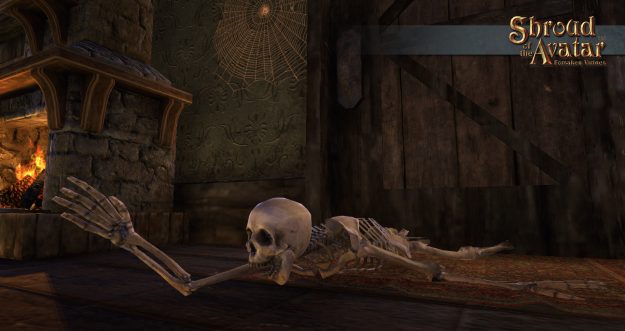 After the 30 days, the food supply ran out. Albeit the Humans then scavenged for
food, there was little to be found and starvation overtook them. As one may know, it takes about 26 days of starvation before a human resorts to cannibalism. Around Day 56, the cannibalism ensued.

One killing after another was “justified” by the residents. If a local resident had a foot injury, he was slaughtered in the Butcher Room, a new addition in the city center. If another resident was considered too old or unproductive, they were also sent to the Butcher Room for processing. If someone tried to steal food, they were hanged in the gallows or thrown into the city prison to serve on death row. Rows of dead bodies were created during this sickening and multi-layered process.

Meanwhile, King Timmy, the 8-year old leader of the town sought an escape route. King Timmy’s father, Anton, as you may know, was a great soldier that won many battles and claimed many lands. Upon King Anton’s death, Timmy was declared King. This Great Siege began after Timmy was crowned. 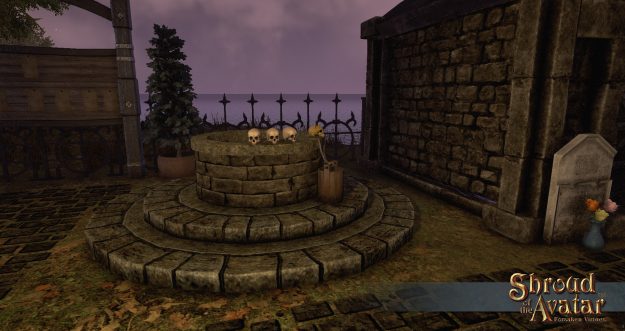 In desperation, the townsfolk believed escape through an old well was possible. When each man was measured, King Timmy was the smallest; therefore, the townsfolk thought he was the most able to squeeze through or by any obstacle inside the well. So, Timmy was lowered, and his fate was sealed. 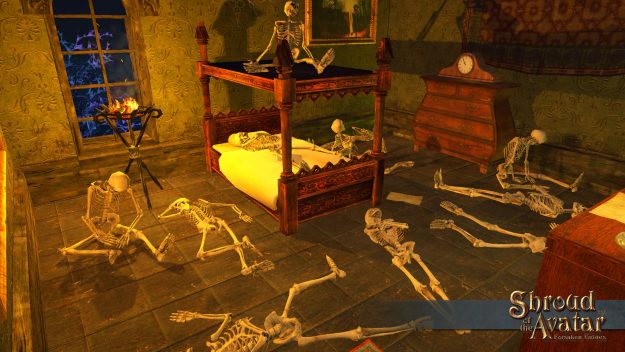 The remaining survivors hid within the master bedroom of the house for the remainder of the siege. By Day 69, all of the residents had died from either cannibalism, sacrifice, or suicide – it was a massacre. When something is so PUTRID, so VILE, so EVIL… word gets around, and it gets noticed. Well, word of this massacre had spread to Brittany, so Brittany sent reinforcements.

By then, the Liches had already moved into the town and began to entrench themselves. However, realizing their days were numbered, the Liches forced a local Alchemist to concoct a Potion of Mind Control to bend the minds of those around them. Discovery of the right combination of ingredients proved far too stressful for the Alchemist, rendering him insane.

The Brittany reinforcements arrived and vanquished the Liches. After the war had ended, the town was renamed, “Mynwent”. A fitting name which provides a sad reminder of the great calamity, a name which means “graveyard” in Welsh. And graveyard it is, for many are burried here, and their spirits still haunt this land, grasping jealously at the souls of the living. 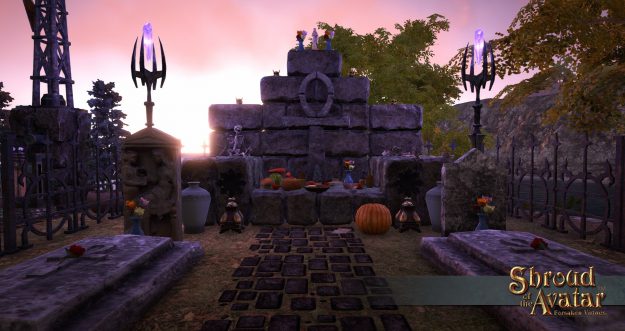 The Mynwent Haunted House is located in the Player Owned Town of Mynwent at the city lot owned by Vooch (381.8, 46.3, 218.4). As you enter Mynwent, turn around and head east down the path until you see the Haunted House on the left island.

For the best experience, private tours are available by contacting Vooch or Twilight Tempest in-game (@Vooch and @Nighttempest in the forums). They will be more than happy to guide you! 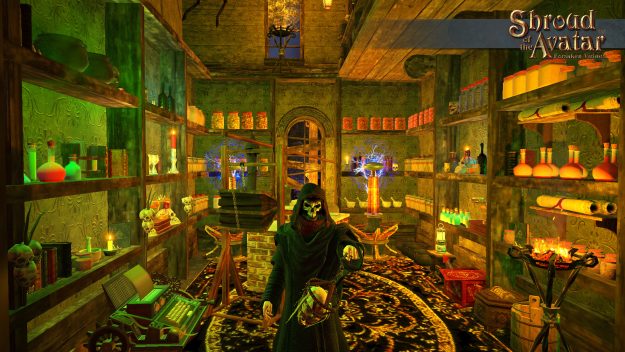 Imagine an in-game home or quest that talks to you. Now, after nine months of development, you may experience one! Visit the first automated audio home tour in Shroud of The Avatar! Guests rave about the Mynwent Haunted House for its groundbreaking story driven audio accompaniment, synced perfectly with your guided tour.

During the rest of October, Vooch and Twilight Tempest will be available to give you a guided tour through the Mynwent Haunted House, so be sure to add them to your friends list. Simply whisper them in-game and ask for a tour!

Tours begin 49 minutes into every hour to coincide with the setting of the sun. As it gets darker, be prepared to be scared!

While you can go it alone, it is highly recommended to go with a guide or someone who’s already been on the tour. The prompts and cues within the streamed audio accompaniment progress quickly, so without a guide you might miss a turn and become lost. Once derailed from the tour’s route, described fully by audio, your experience my be negatively impacted. So… seek out a guide, oh Outlanders, for this tour is far too dangerous to partake alone.

There are so many towns and historical landmarks to explore throughout New Britannia. If you are interested in sharing your tales of adventure, message community manager Berek!