More cool stuff to share with you in this edition of Update of the Avatar, including the Sigil of Magic, progress on the crafting stations, results of our first 48-hour Unity Scene Jam, Founder Collector’s Coin, updated FAQ, and more!

Our first Unity Scene Jam was a great success! This scene challenge involved a design that included a “Lunar Rift” and the ruins around it. We asked for the Lunar Rift to be one up on a plateau or at least on top of a very steep hill (see challenge design description here). We received a total of 48 submissions, with some awesome talent participating!

It was tough to choose the winner from among the top entries, but after much deliberation, Richard, Starr, and Chris unanimously chose Richard Matey as the First Place winner of our first Shroud of the Avatar Unity Scene Jam!  Chris Spears prepared this video walking you through Richard Matey’s sweet looking scene. So crank the quality up to HD, switch to full-screen, and enjoy!

As one of our First Place weekend winners, he will receive a Knight Level Pledge, signed game box, and SotA t-shirt! Congratulations Richard Matey!

Coming in at Second Place is the team of Charles Howell and Mark A. Barros. Check out this cool image from their scene:

We were so impressed with the top entries, that we decided to award pledge credits to the second and third place winners! Congratulations to Charles, Mark, and Melchior!

The Sigil of Magic 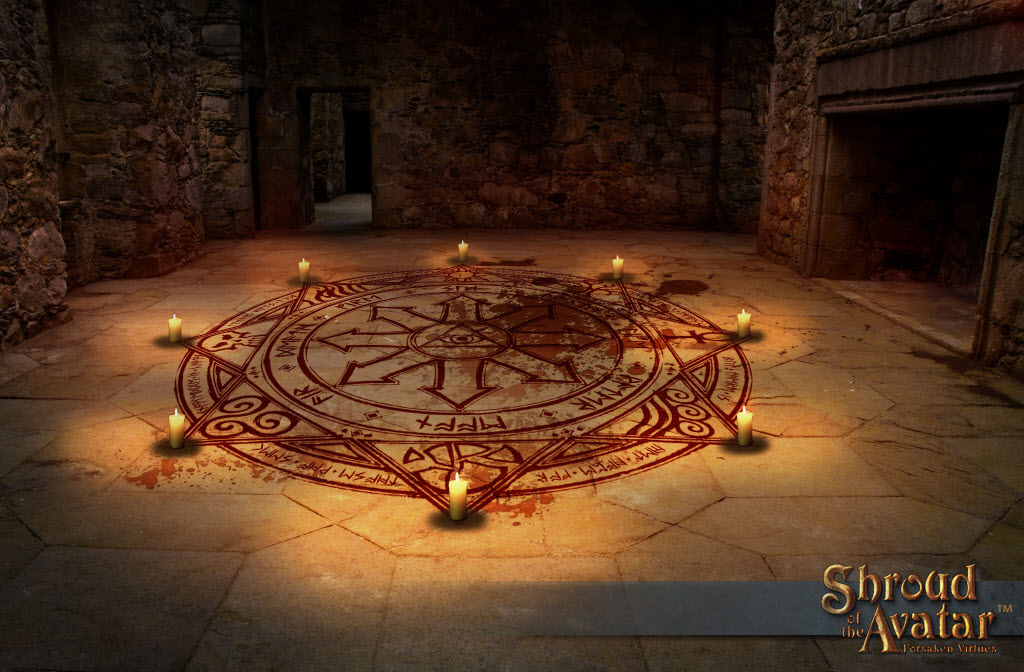 There are nine schools of magic in Shroud of the Avatar: the eight elemental schools of Fire, Air, Water, Earth, Sun, Moon, Life, and Death with the ninth school of Chaos in the center of them all. Each school has a focus. Fire magic, for example, directly damages your enemies but also has a tendency to light them on fire, prolonging the damage dealt. Water magic on the other hand is about slowing your opponents with ice and healing your allies with soothing rains. The sigil represents how all the schools relate to each other and it will appear inked on parchment, carved into stone, sewn into cloth and minted into metal coins.

Stephen Daniele did an amazing job crafting the image of the Sigil of Magic from Chris Spear’s initial diagram! What follows is the Magic Sigil as it could appear on various materials.

The Sigil of Magic on Parchment: 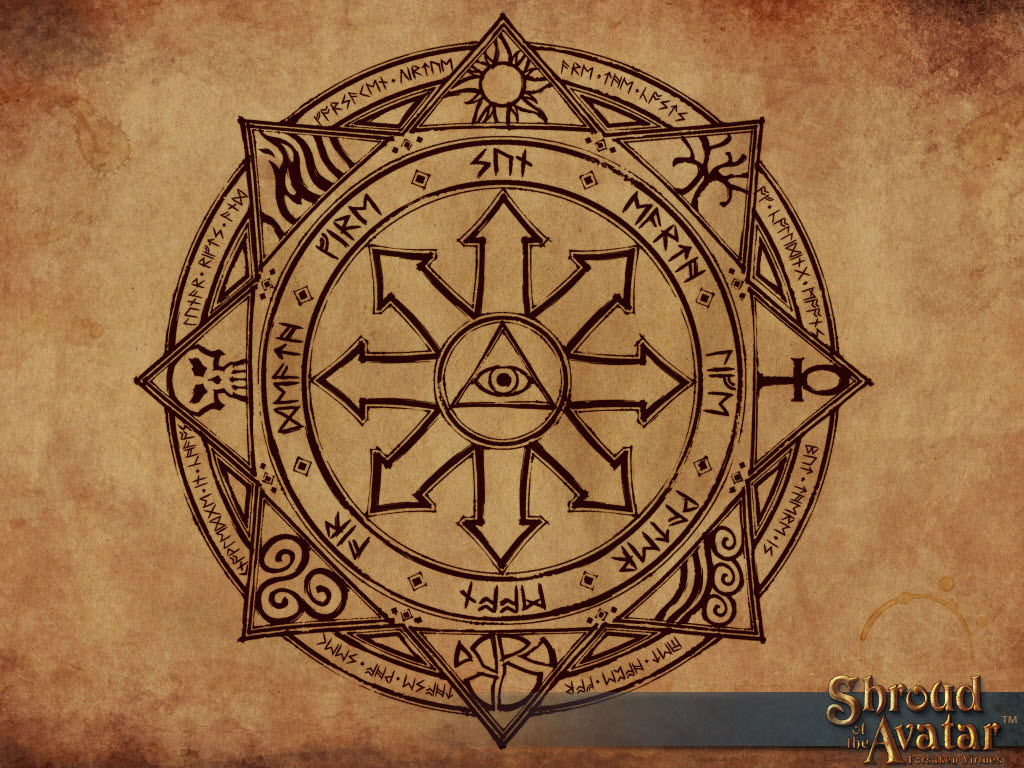 The Sigil of Magic on cloth: 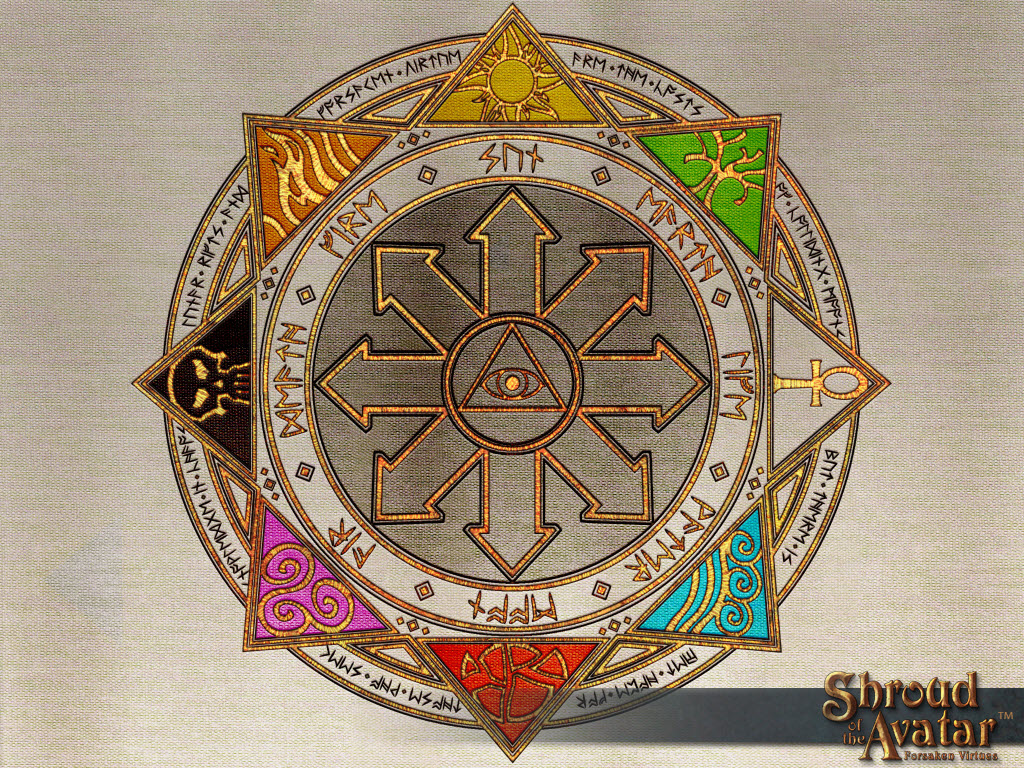 The Sigil of Magic on stone: 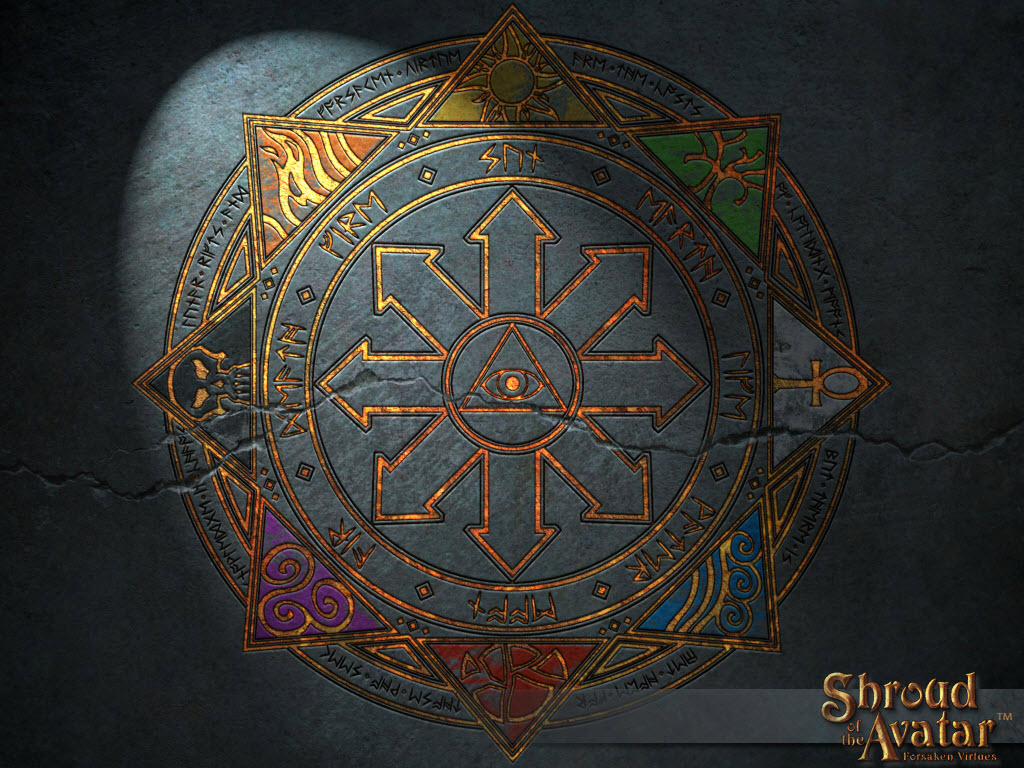 A couple of our most active backers, Frank Baxley (Sir Frank on the forums) and Joseph Toschlog (Vitralis on the forums, aka Rustic Dragon at Hearth of Britannia), were brainstorming a coin design to be manufactured for their own use, and asked about rights to use the SotA logo and images. Stephen Daniele (lead concept artist) provided a few concept sketches, and the design brainstorming blossomed into an eighty-seven email thread between our team, Frank, and Joseph!  We got so excited about the final design, that we decided to use it as the physical goods “Official Collector’s Coin” included in the Early Founder Collector Pledge Tier (and above) rewards. Check it out: 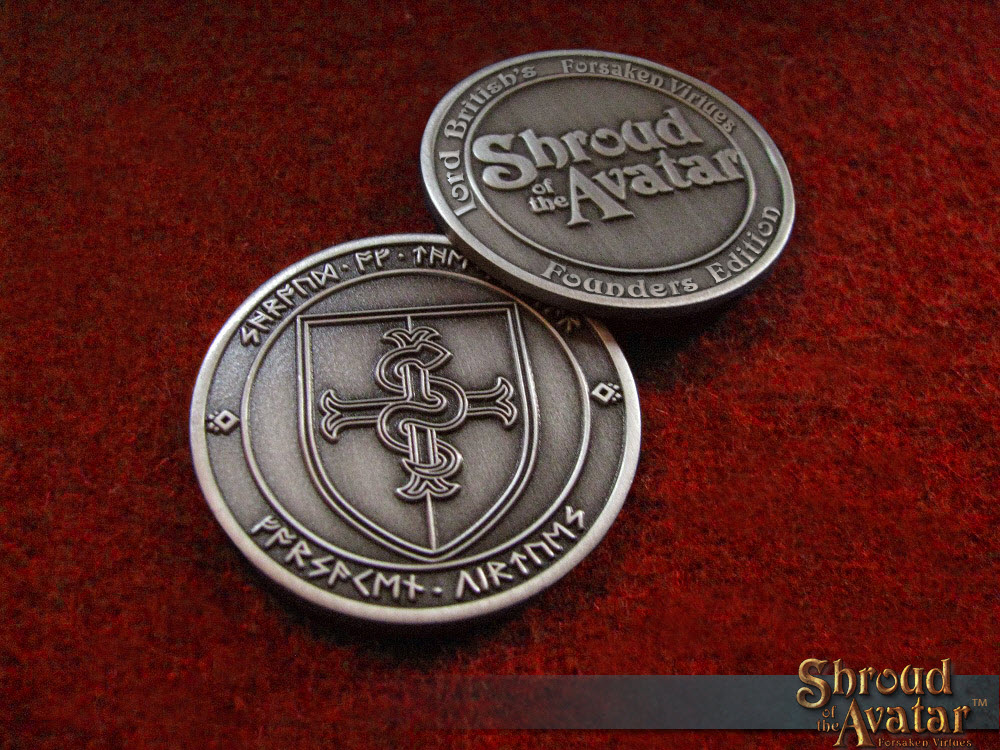 Cooking Up Some Crafting Tables

Just as with all Lord British games, crafting plays a big part in Shroud of the Avatar. As described in our recently updated FAQ:

Players will be able to make almost anything in the game including furniture, consumables, and equipment. The results of all crafting elements have value as consumables and components in the combat system, as well as maintenance and upgrade elements for housing and cities.

Also explained in the FAQ, you can allow your friends to enter your property and use your crafting stations. And you can have NPC vendors stationed on your property to sell the goods you craft to other players.

Scott Jones (environmental artist; known as Scottie in the forums) has a great thread in the Dev+ forums (and reposted in the Founder Developer Blog) discussing his ongoing work with the crafting stations. Here are some excerpts:

Scottie: Hello again! Scottie here, with a new thread showing off some of our Crafting Stations that are in-progress as we speak…The idea of these tables is that they are mostly devoid of any tools and ingredients (these get placed on the table’s interface as icons when you begin a crafting “recipe”). Assuming the recipe is a success, the tools will get a little worn and will remain to be placed back into your inventory, the expendable ingredients will all vanish, and these will be replaced by the icon(s) for whatever crafting creation you’ve just made! As you can see below, our first few tables were somewhat simplistic and allowed us to test the look of the things as we barely started dealing with functionality. They are relatively empty of any major table-surface details, but I’ll eventually be going back and adding stuff like stains, splotches of paint, wood chips, sawdust, etc… 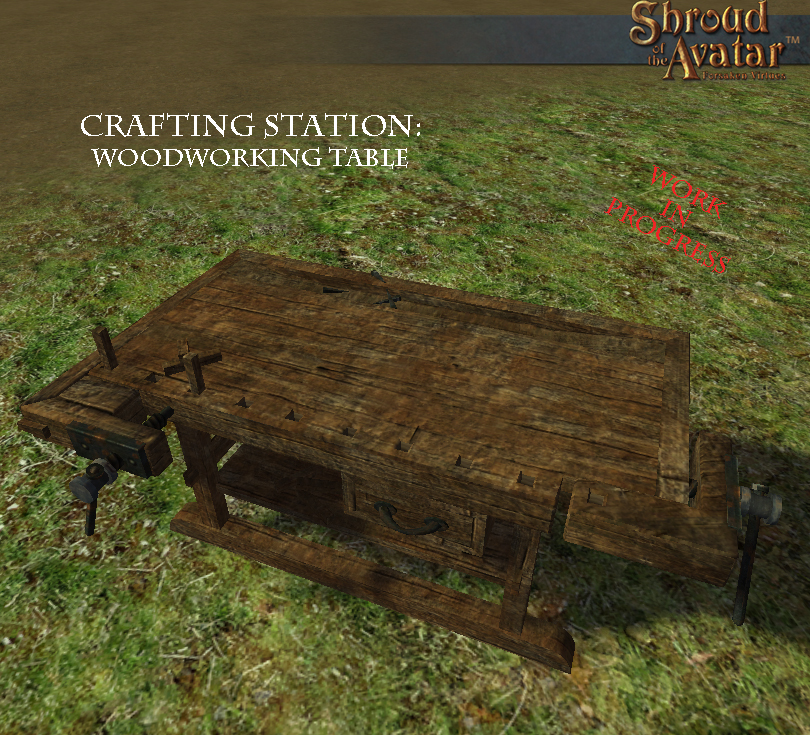 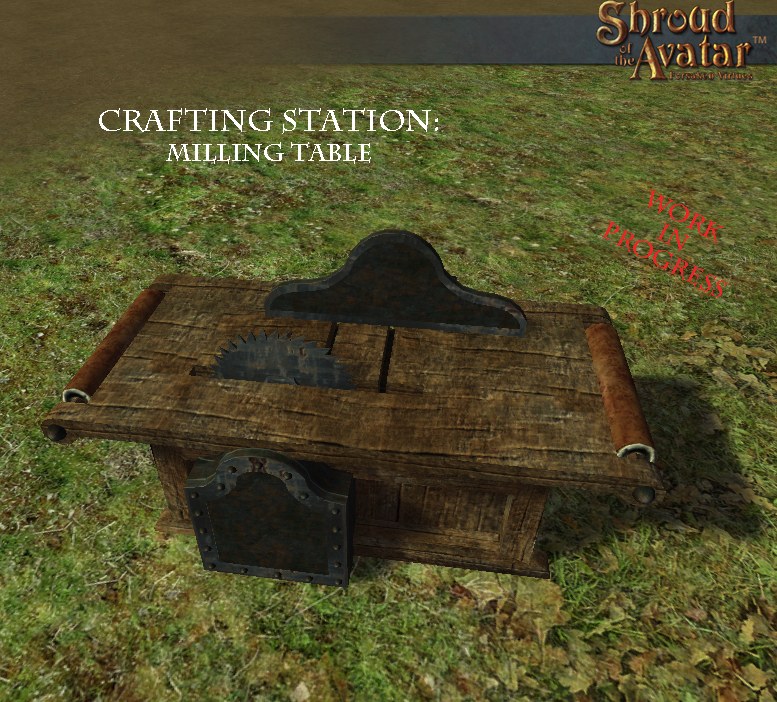 Scottie: As you can see, somewhat simplistic, and in the case of the Milling Table, quite anachronistic (What exactly is supposed to be in that black box under the table,…gearworks? We’ll never know…)… The final look of these tables is still somewhat under debate…as you can imagine… The Woodworking Table, however, IS based on the age-old designs of tables such as this throughout history… Once they got the basic needs figured out, the essential concept of these types of tables really hasn’t changed… For that one, I’ll just most likely be sprucing up its detail level a bit. As we got further along in the process, though, and I had a chance to sit down with Richard and really hammer the designs out better, we got some MUCH better inspiration for some of the more recent tables, as you can see below…

Here’s the Butcher’s Table, in all its gory glory: 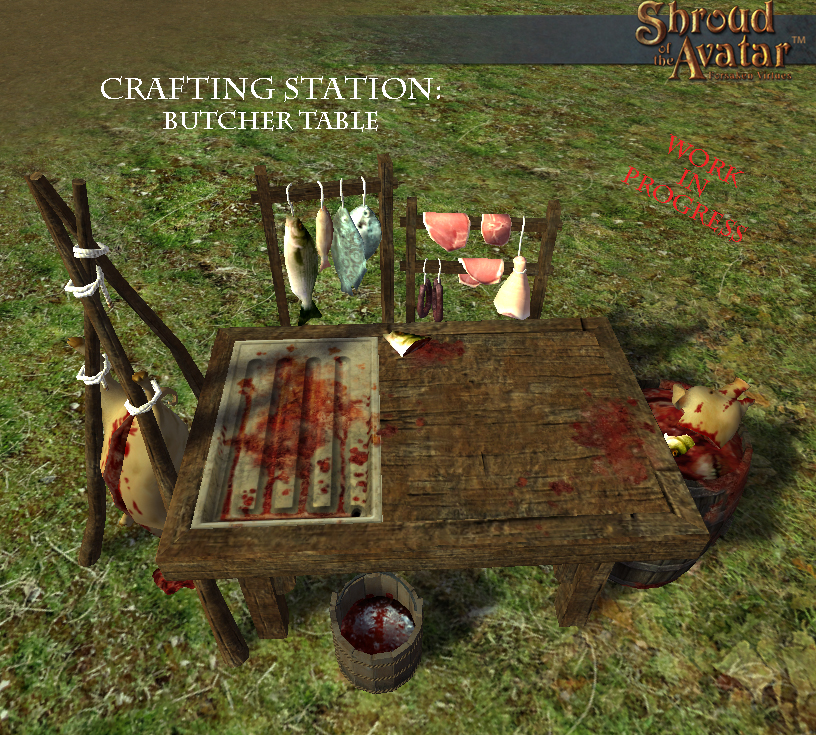 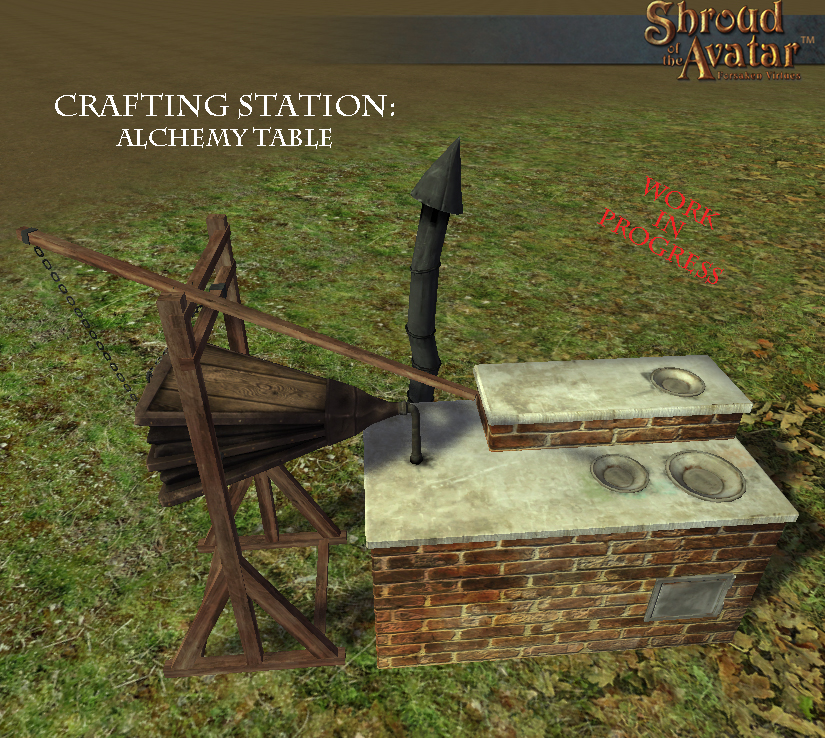 Scottie: Here we have the Cooking Table, with its cheerful fire, and some of the first attached special effects and built-in lighting: 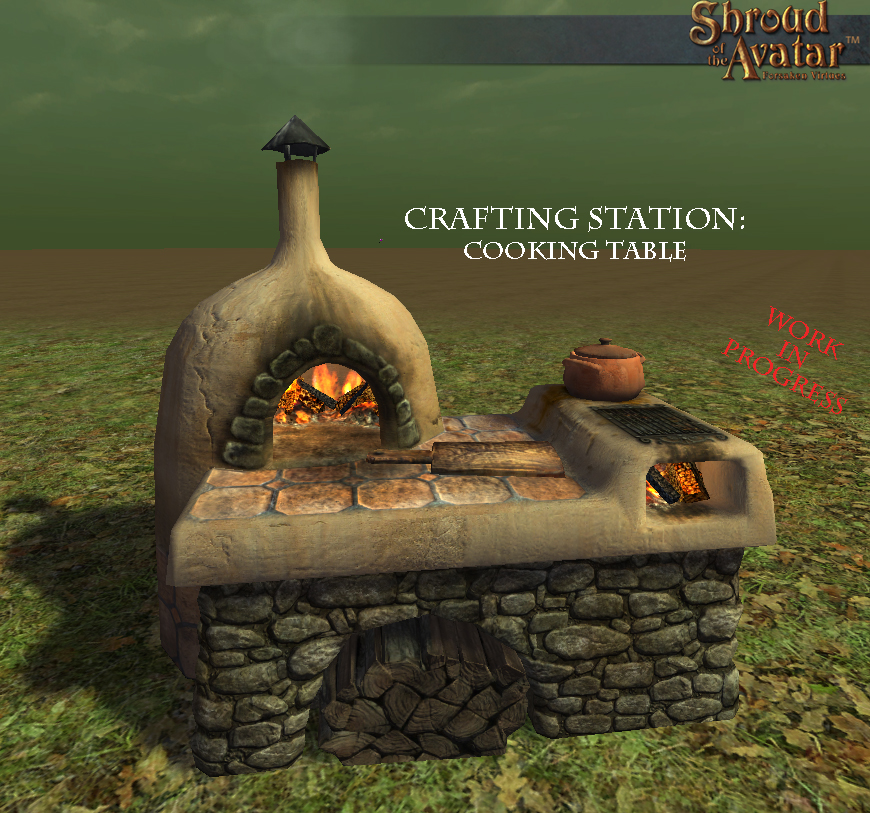 Scottie: And here’s the Smelting Table, where you melt down the ore you mine and other metal ingots to pour into the molds used to makes all sorts of stuff later when blacksmithing: 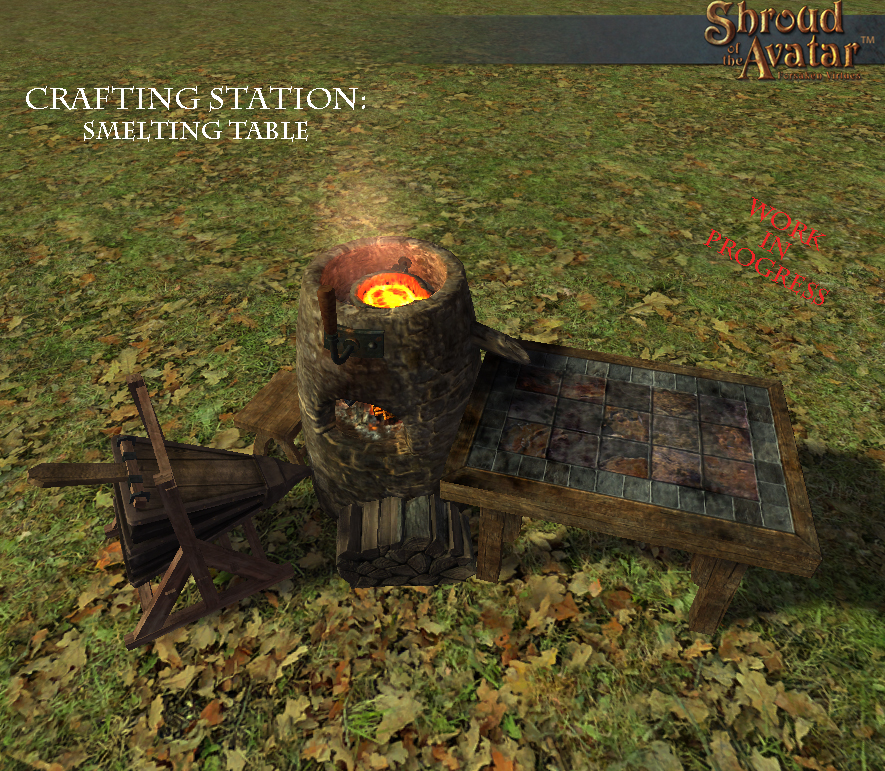 Scottie: Here’s the newest crafting station,..the Blacksmith Table! We wanted to make sure the table itself decoratively reflected the nature of the blacksmithing craft, so we have a wrought-iron tripod holding the quenching bucket, a horseshoe hanging from a nail below the anvil, and the riveted and cast decoration around the table’s edge and legs… 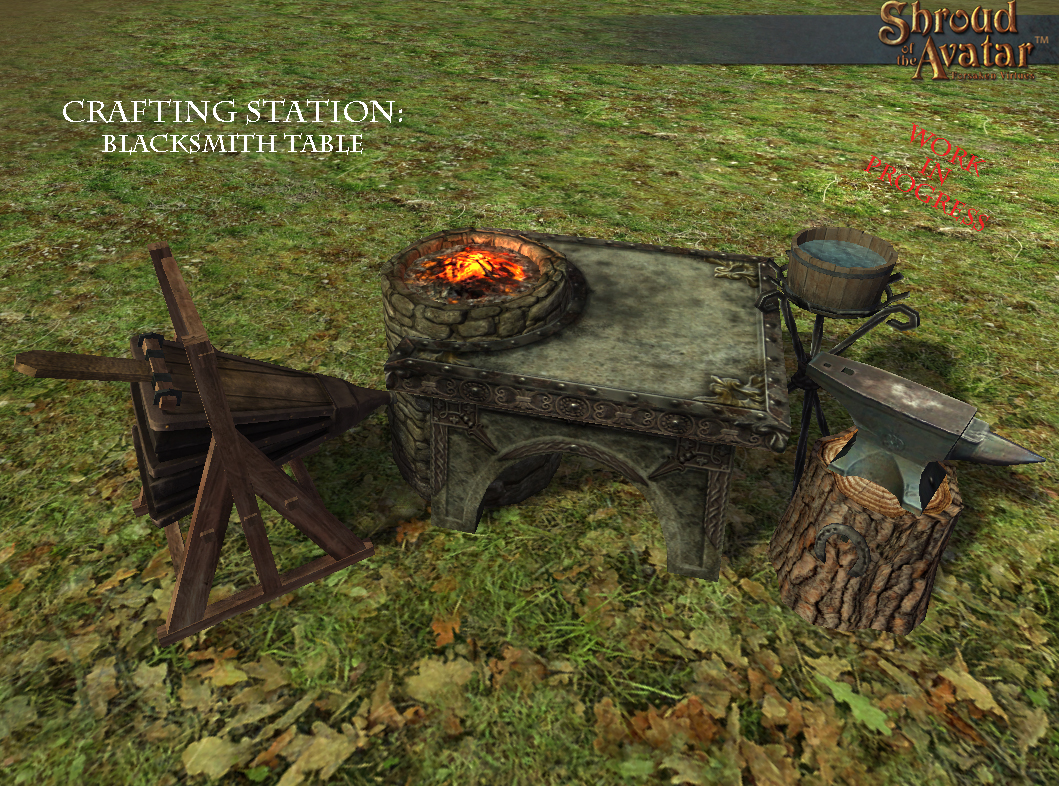 Ekibyouko, one of our community members, shared this insight with Scottie: “Love the look of these tables! Just one thing though, shouldn’t the alchemy table have some empty glass vials, wooden jars with cork tops and maybe a mortar and pestle? Just a thought.”

Scottie: Great minds think alike Eki! Before we could make a more final prefab for this table, we had to wait for our wonderful artist Jay to create a few alchemy props that Richard approved for us to include with it… We can’t put too much there (there must be room to place the ingredients and tools)…. But here’s what we’re finally getting! 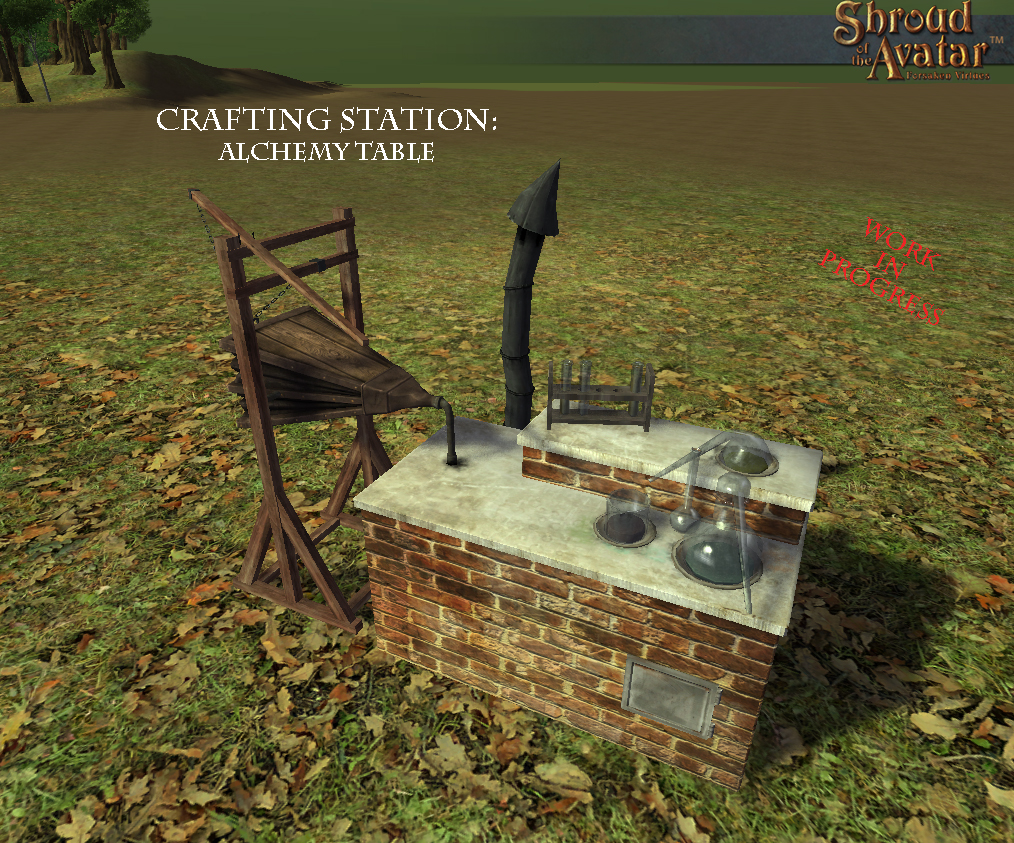 Scottie: So here we have the next station, the Tanning/Dyeing Table, where your harvested skins and leather get turned into colorful, tanned fancy pieces of leather which will be used to eventually make awesome outfits and armor at the Tailoring Table! To the left of the tanning/dyeing table we have the grotesque tanning vat, with the dyeing vats on the right, and behind the table are stretching racks and an assortment of hanging leathers and furs… 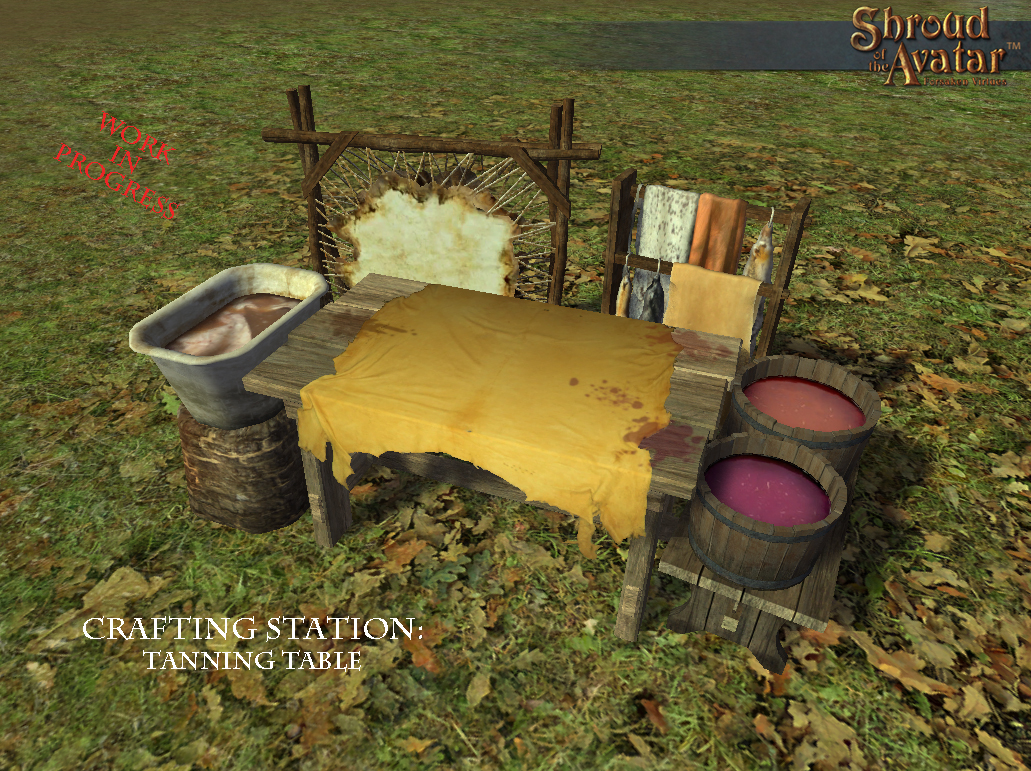 These crafting stations are works-in-progress, and Scottie plans to go back and touch a few details here and there. A total of eleven crafting stations are planned, so Scottie still has three left to do. The Spinning Table, where rough materials like spider silk, plant fiber, and wool or fur, are spun into a variety of threads that can be used to make cloth. The Weaving Table, where the thread you crafted with the spinning table gets woven into rough and fine cloth, (and possibly even decorative tapestries, and rugs). And, finally, the Tailoring Table, where the cloths you have made and even the leathers you’ve tanned and dyed, get assembled into a variety of clothing and armor.

Dungeon and Cave Kit in the Unity Asset Store

Our Dungeon and Cave Kit is now available in the Unity Asset Store. We combined the dungeon and cave pieces into a single kit that includes more than 200 pieces that snap together seamlessly on an 8x8m grid. Textures have been created such that they blend seamlessly together no matter how they are rotated. Pieces come in narrow and wide widths, wall pieces can be tiled for high ceilings. Connection pieces exist so you can easily connect the crypt like dungeon set with the more natural cave set! Low poly counts (most pieces in the 300-2500 vert range) and heavy material reuse make this set suitable for many mobile devices. 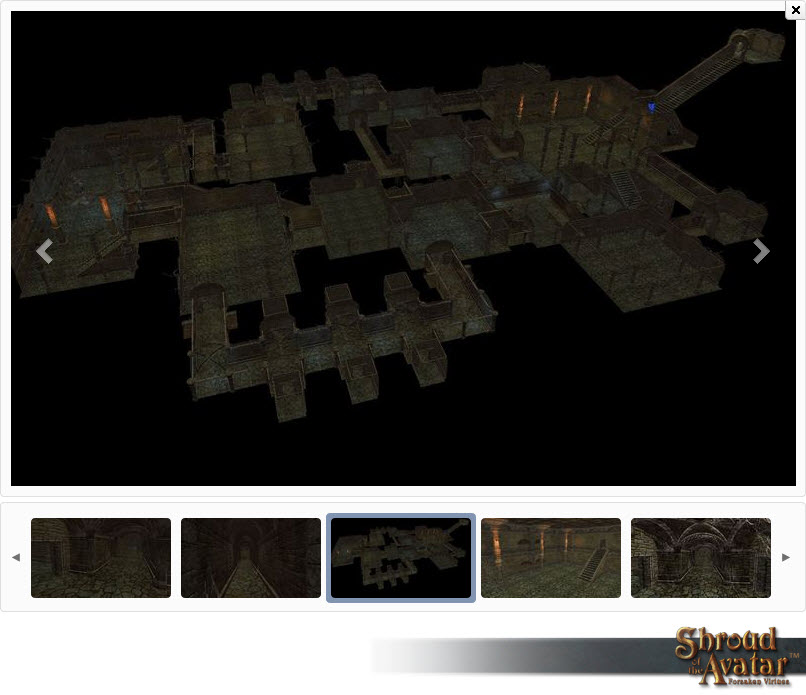 Starr Long (Executive Producer) recently updated and expanded the SotA FAQ. Many of the questions we receive on the forums and in support tickets have been covered in the revised FAQ, so we highly recommend that you check it out if you haven’t seen it lately. Here are a few juicy morsels to whet your whistle:

The Housing section of the FAQ has been greatly expanded, so check it out if you’d like to learn more!

Decor of the Avatar (again)

Some of you didn’t see last week’s update due to an email glitch. In case you were one of those that missed it, Rick Holtrop choreographed an awesome video demonstrating the latest progress in our home decorating system, narrated by Lord British. Enjoy!

Click here to check out the rest of Update #40, including information about the Founder Edelmann Home, The Tower Town & Village Home, The Kobold Attack animation, and more.

!Shroud of the Avatar for a bit, then a couple new games....

Shroud of the Avatar (offline)nEpisode 20

A Peculiar Pastor Plays Shroud of the Avatar!