Welcome to this week’s edition of Update of the Avatar! More cool stuff to share, including: 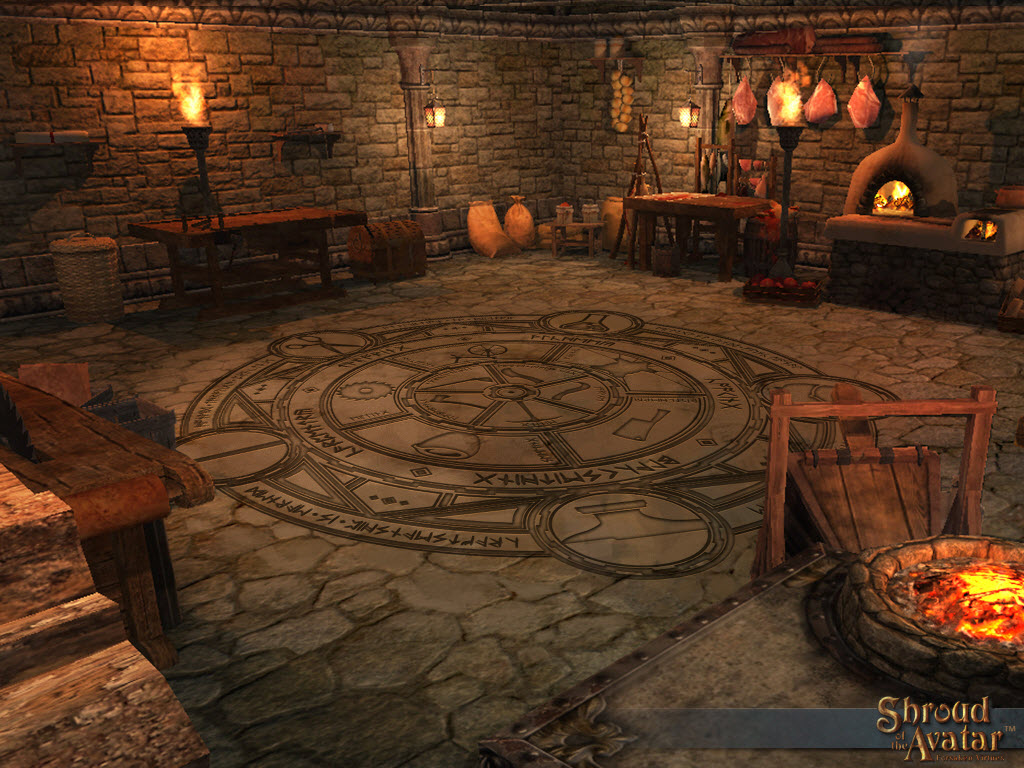 The rings represent the paths required to make items. For instance you use Mining to get Ore. You then smelt that Ore into sheets, wire, ingots, and sword blanks. Finally you use those smelted items to create weapons, armor, and tools. 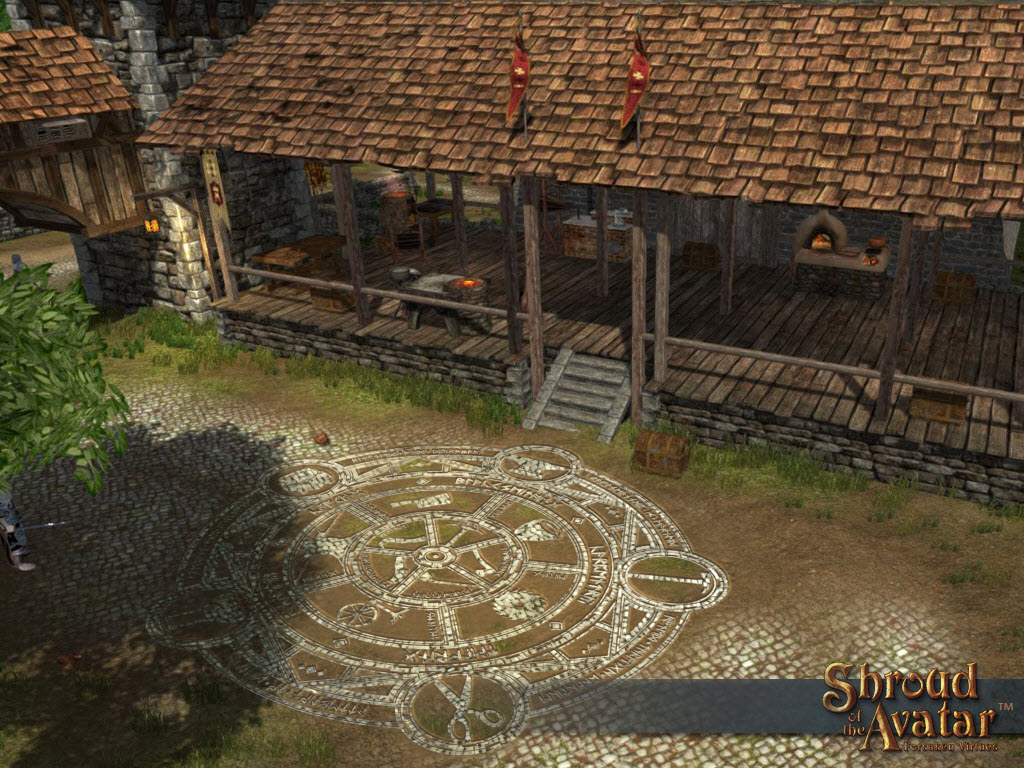 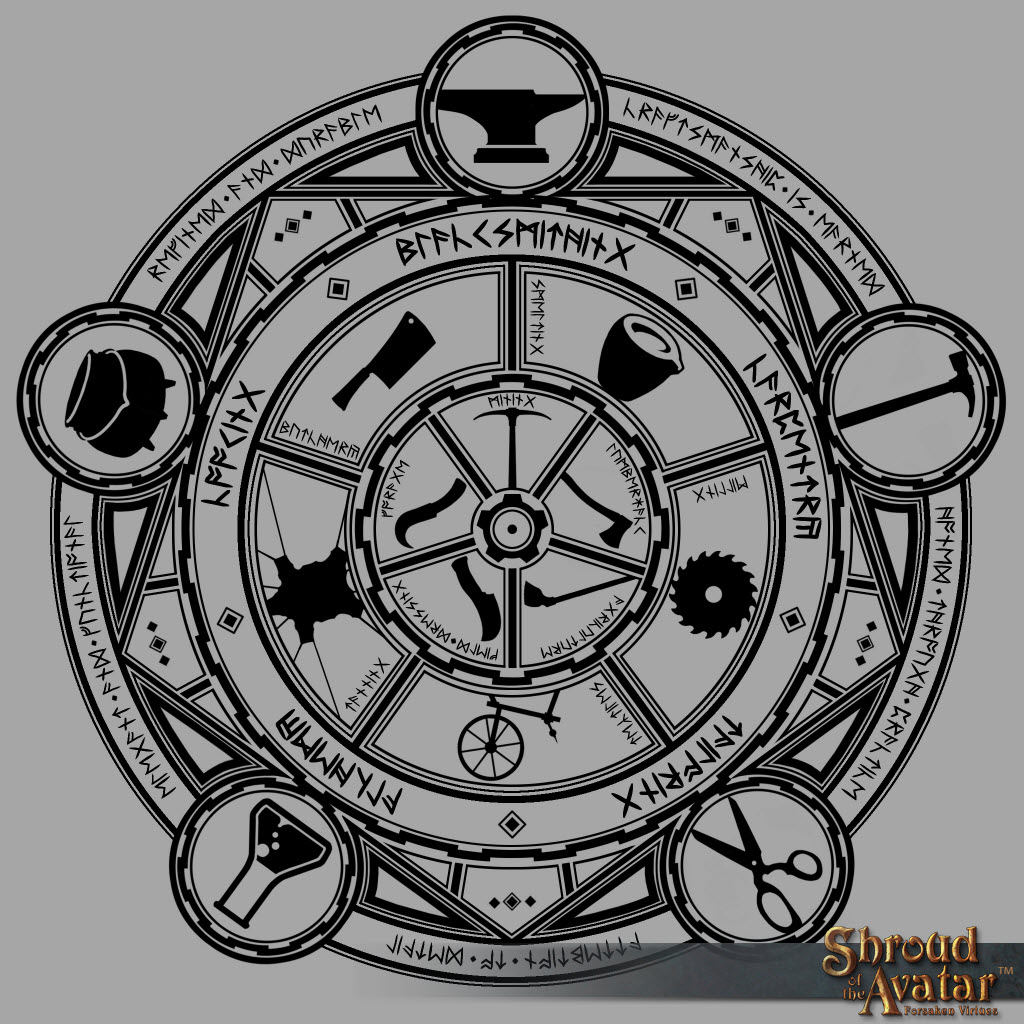 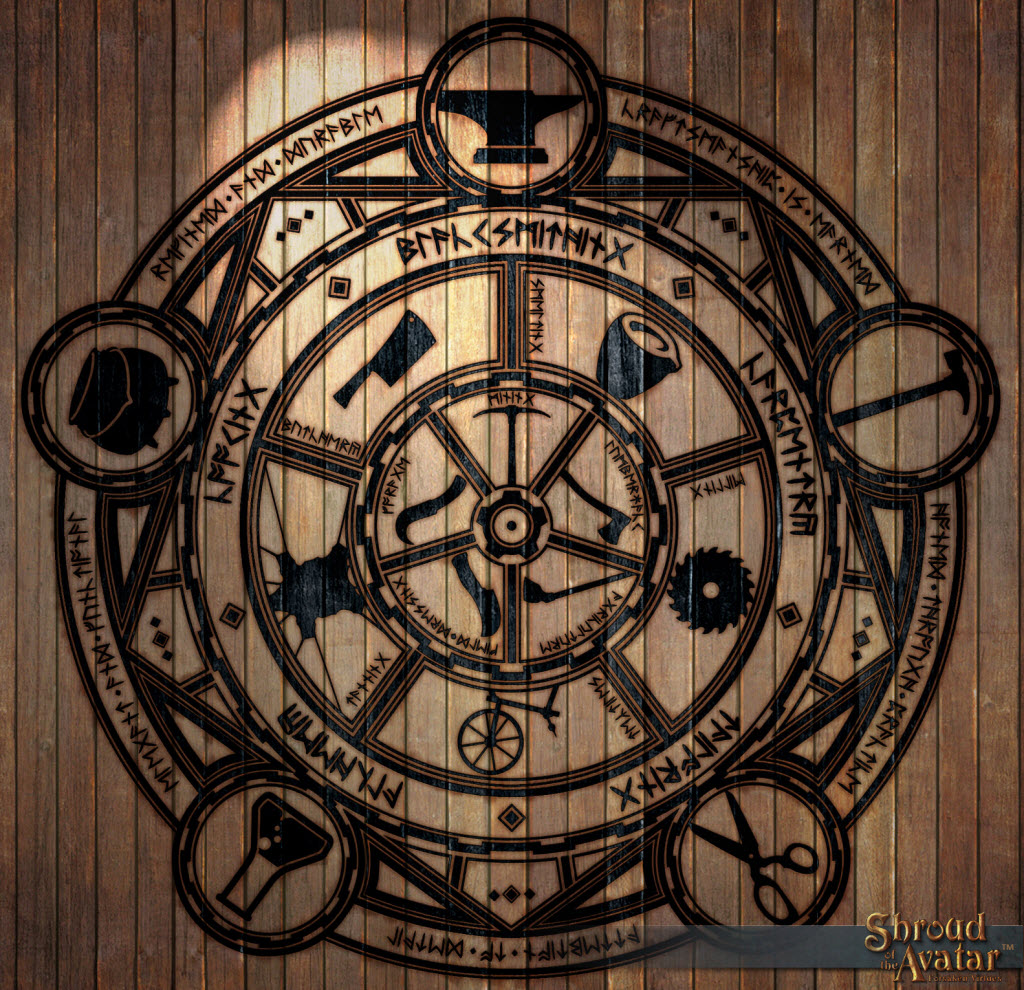 Greetings, traveller. I am Arabella, and I have been sent to find you. There are those who believe you are the one of whom the prophecies speak. A great burden, and a great destiny, if in fact you are the one foreseen…

In this appointed hour, we have been taught to expect one from another world, one distant from ours in both time and space… the world of Earth, of Lord British. Yes, he remains with us, and if all goes well, he hopes to meet you on your travels…

Yet, there are paths that you must walk, as the prophecies foretold. There are many who would challenge your place here, in the lands of New Britannia. There are many who have forsaken the virtues, and embraced a world out of balance. This, too, was forseen.

However, what you must always remember, traveller, is that prophecy is but a guide. Your destination may become clear, but what you make of it, and how you shape the world in your wake, is up to you. I beseech you, always remember this… and let it guide you. Always remain true to yourself, and to the virtues. For the sake of New Britannia, you must.

Where shall you begin then, traveller?

Among the seekers of truth, the elvenfolk of legend, lost in the mists of their own illusions? Can you find your way, the way of Truth, among so many who have lost their own?

Or what of the shields of courage, the brave lords of the northwestern lands who act as bulwarks, fighting in the endless war against the kobolds who shape technology and magic to challenge the dominance of man? Will you have the Courage to understand why they still fight, and will they?

Perhaps your path will begin where the dead rise again in torment, the undead armies of Spite, who have stolen compassion itself in a cold fury aimed at everyone yet alive? Can you find Love in a land so stricken with hatred?

The map lies open before you, traveller. It is only for you to choose the path of your destiny. For at your path’s end, as the prophecies have forseen, you must face the hidden ruler of this world, and then you will need all the wisdom our world can teach you…

And at that time, only fate can know what time holds in store for you. For us all.

It is time to choose, traveller…

In case you missed the Story Sneak Peek in our last update, you can check it out here.

It’s been a while since we showed new male avatar outfits, but Geoff Mellon, Isaac Oster, and Kevin Wells have new Cloth, Leather, and Plate outfits to share: 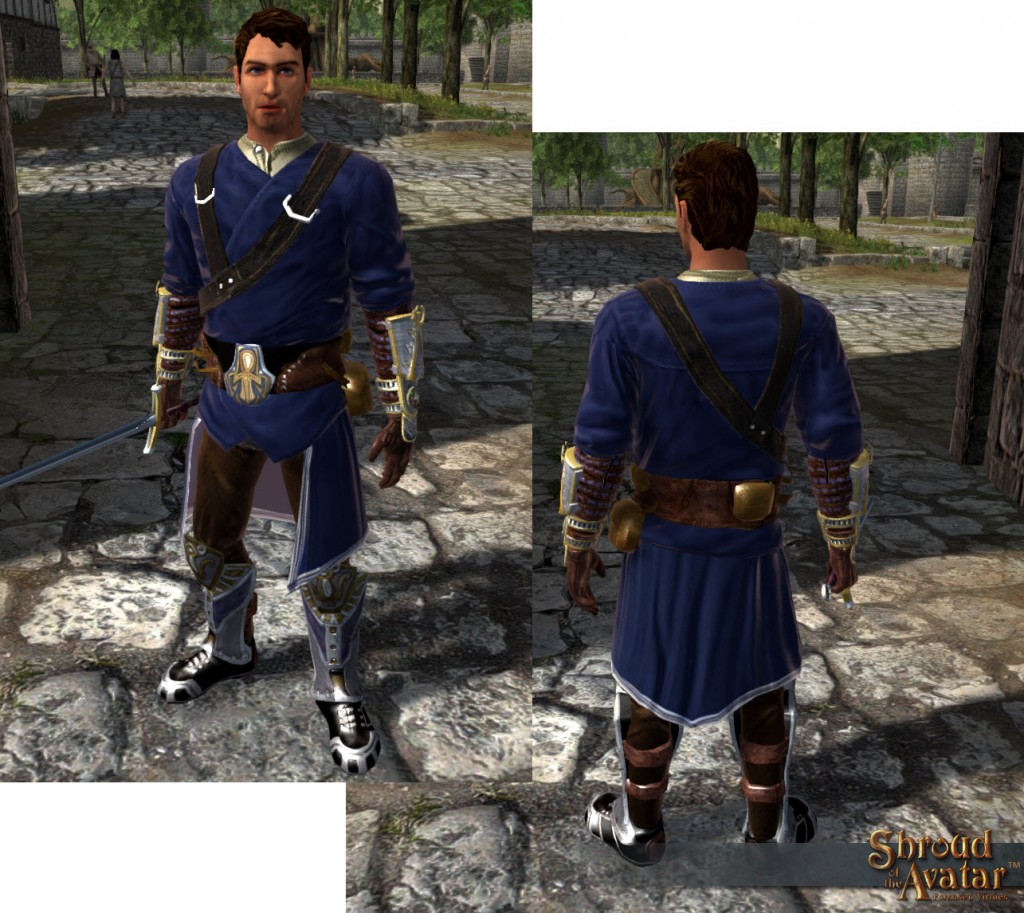 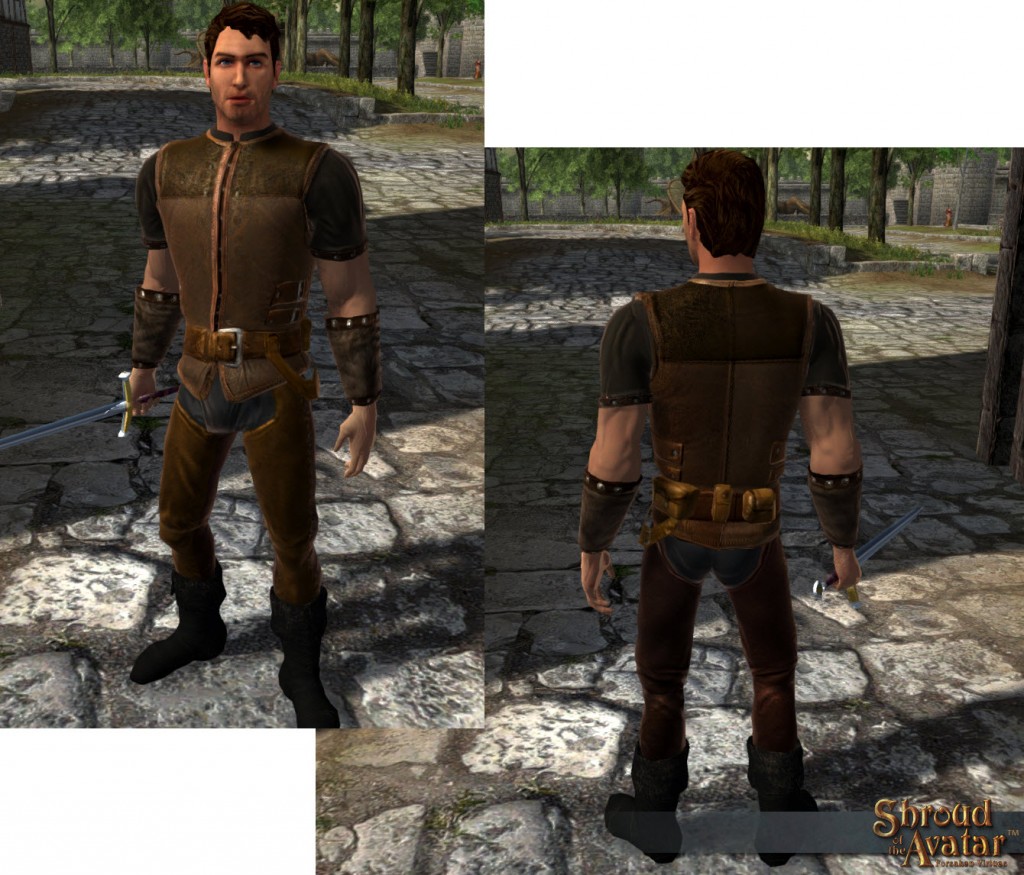 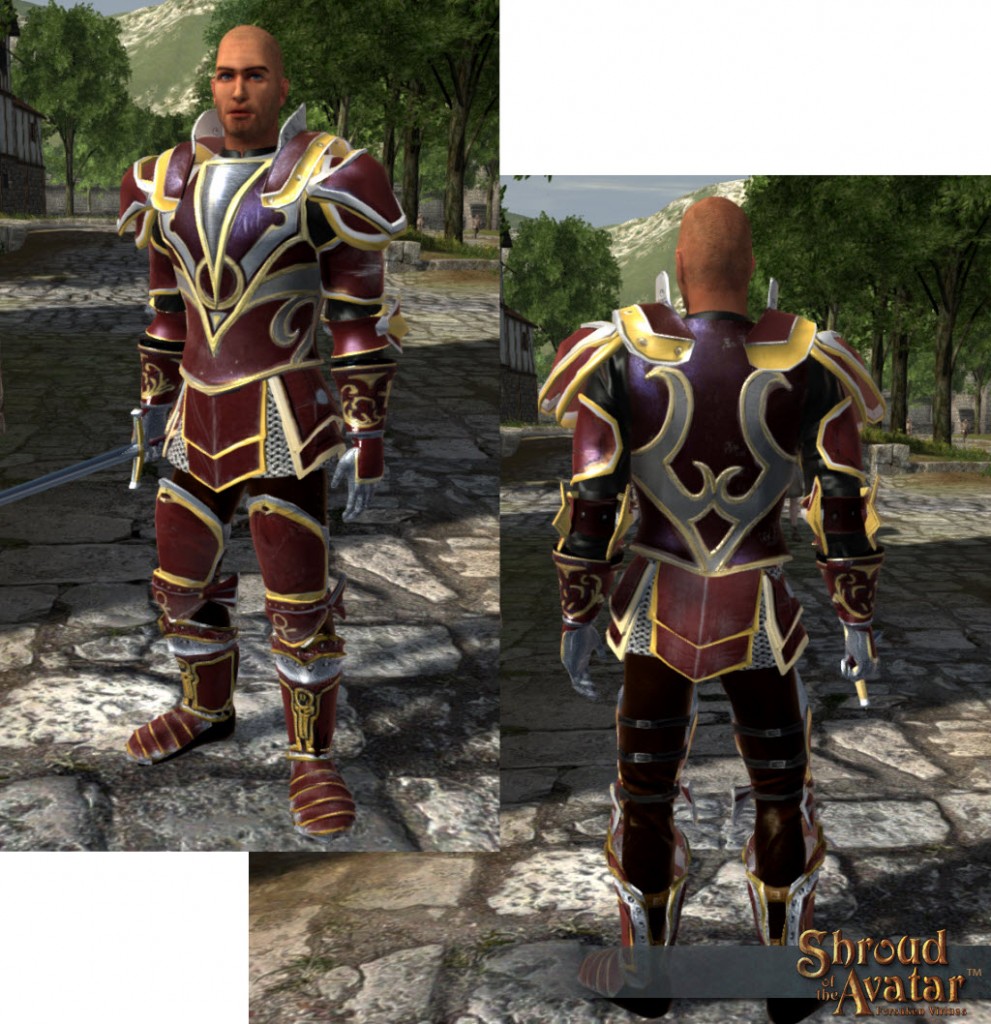 It’s been a long time coming, but we finally have SWAG available in our brand new Merchandise Store! Mr. Mustache Man (Tassilo Philipp) has been burning the midnight oil to integrate a new e-commerce package into our website, and it went live today!

T-shirts are the most requested SWAG, so now we’ve got them! The team was so excited about the Sigil symbols that we decided to use them for our first t-shirt designs, now available in the Merchandise Store! Here are our very own Men of the Avatar to model the new t-shirts (from left to right: Chris Spears, Justin Gilbert, Richard Garriott, Kevin Wells, Isaac Oster): 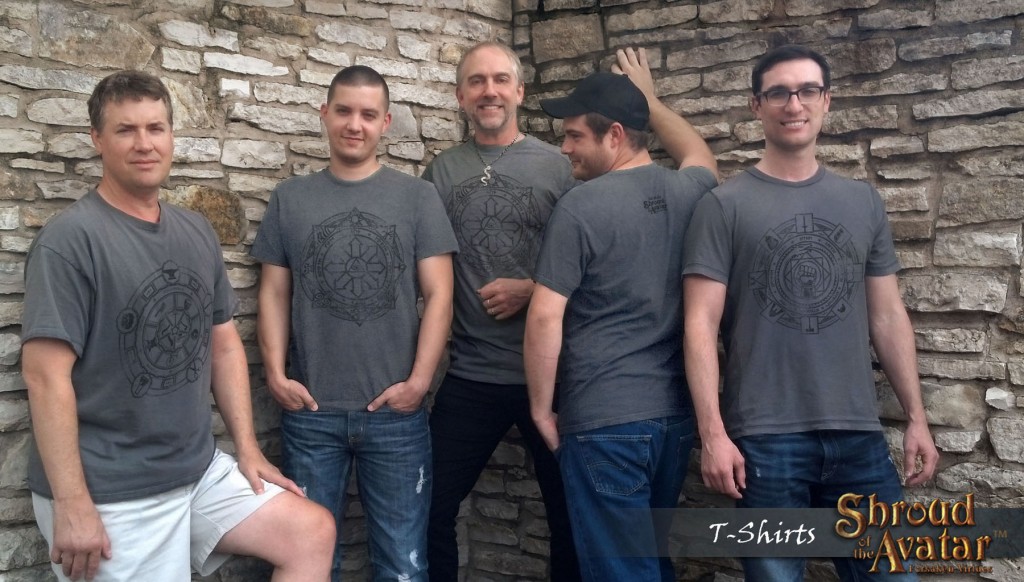 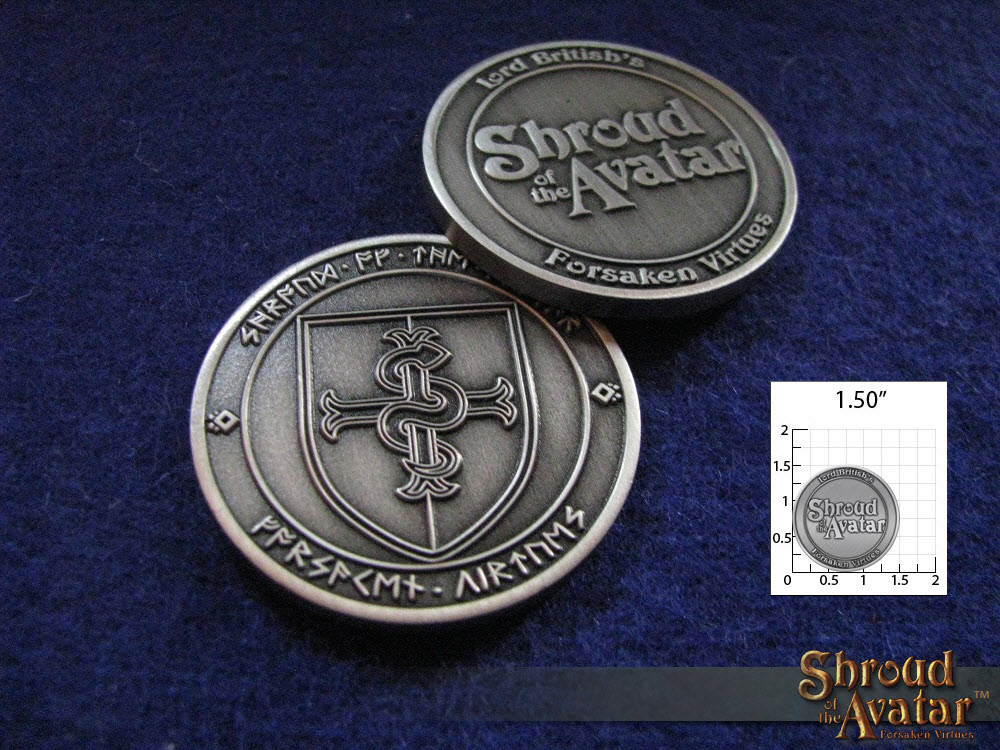 Lord of the Manor Event

One of the rewards for our Lord of the Manor Pledge Level is:

We had our first such Lord of the Manor event at Britannia Manor in New York City on October 5, 2013. As a special, unplanned treat, Joseph Toschlog (Rustic Dragon of Hearth of Britannia) volunteered to cater the event with his original recipes, some of which are adapted from Richard’s past Ultima games. Three Lord of the Manors, and their guests, were able to join us for this event. 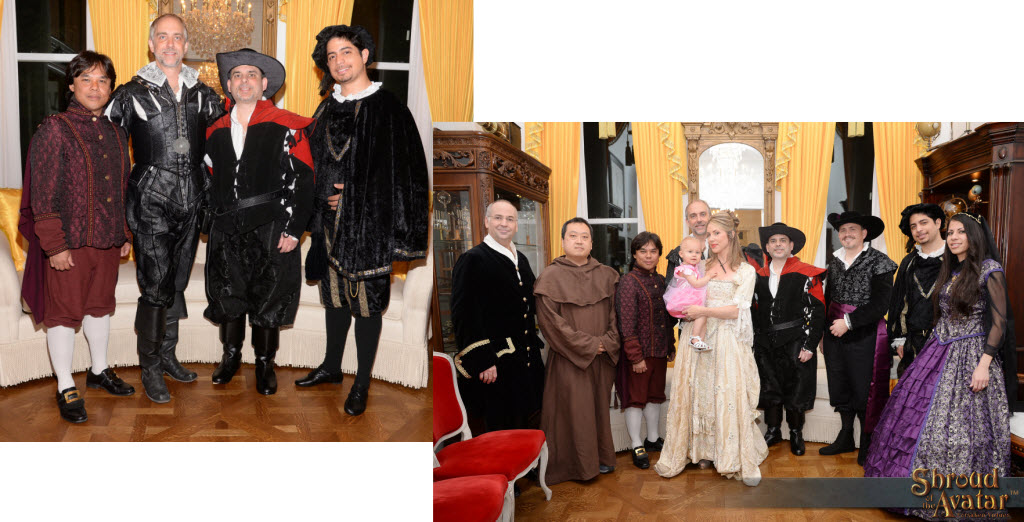 We just had to have a picture of everyone in Richard and Laetitia’s glorious thrones: 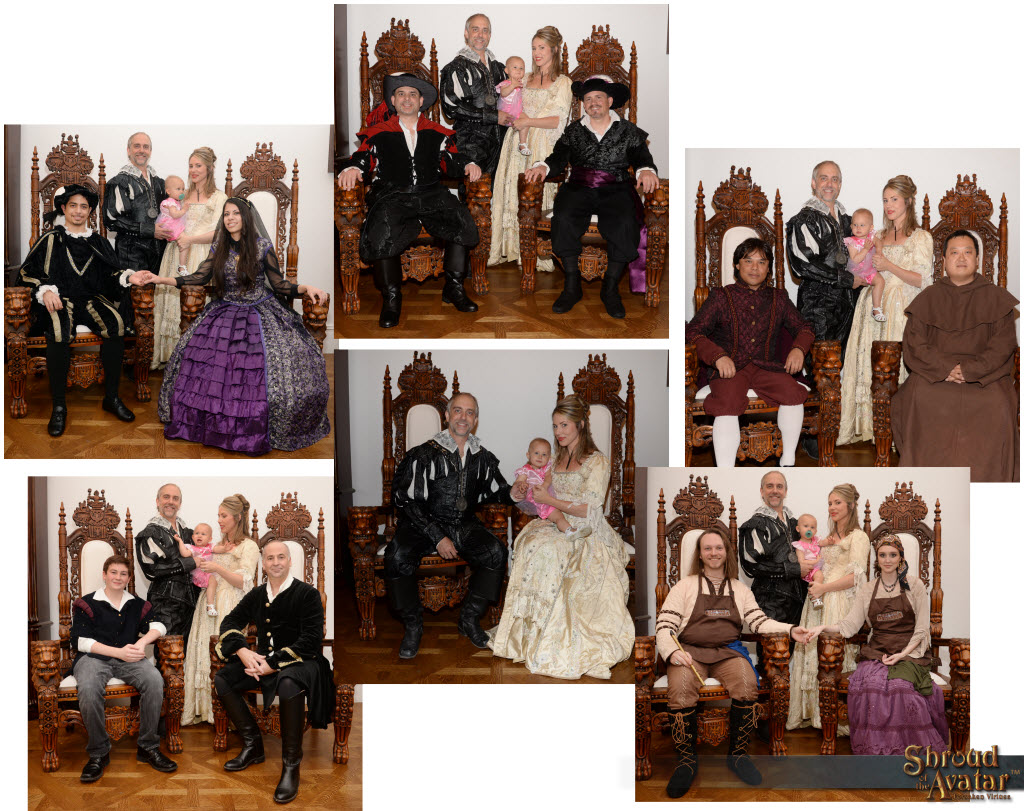 Here we have the Hearth of Britannia buffet and some of the all-day-long meal preparations by Rustic Dragon (Joseph Toschlog) and his companion, Aleksandra Phillips: 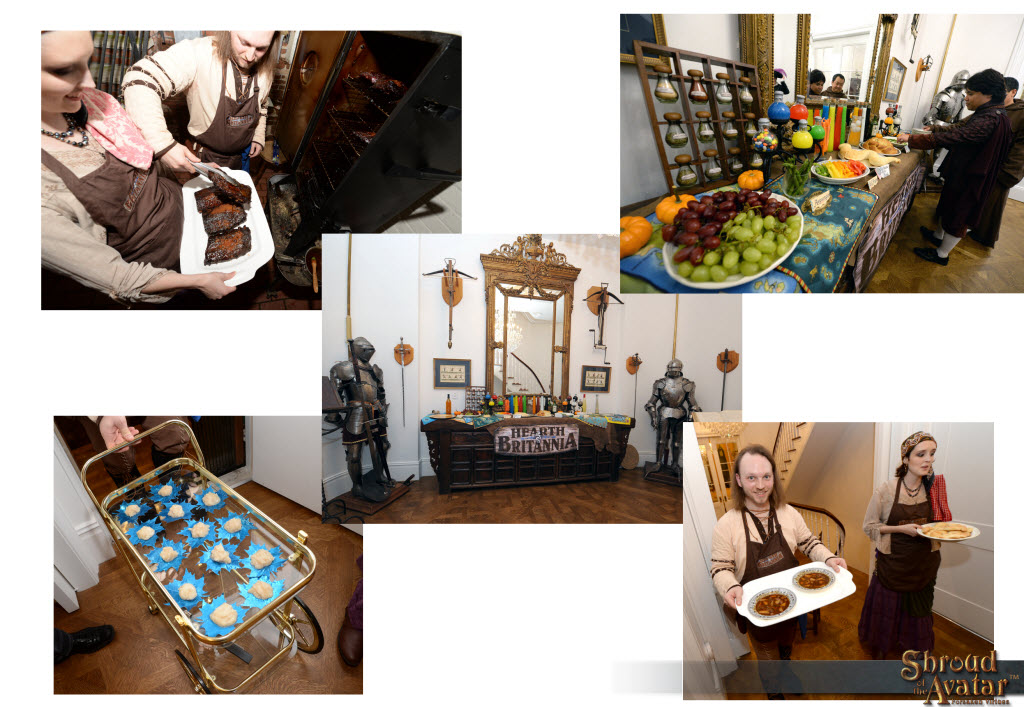 Ah, what a glorious feast Rustic Dragon hath prepared for us all: 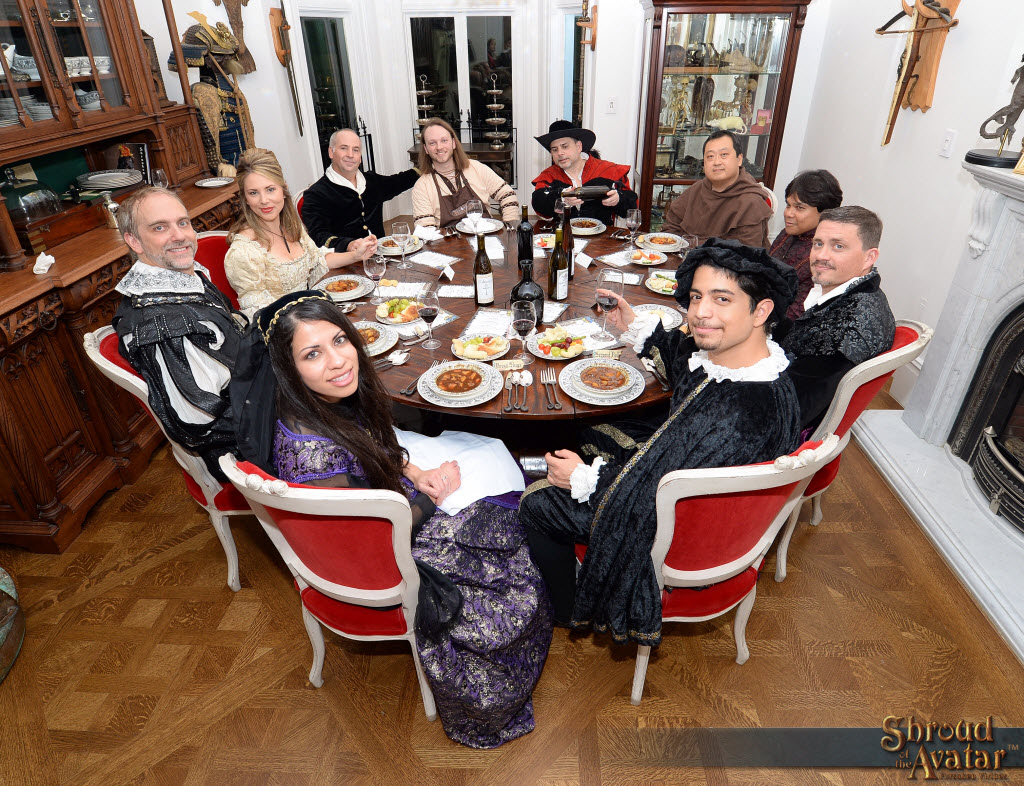 Things got a little wild toward the end of the meal. First, Laetitia convinced Joseph to accidentally cut off Lord British’s rat-tail braid while serving a special King’s bread, then Lord British appeared to be poisoned after eating the King’s bread. Fortunately, Matthew located a coffin nearby, so we had a place to store the body, all of which got a double thumbs-up from the teenager in the group: 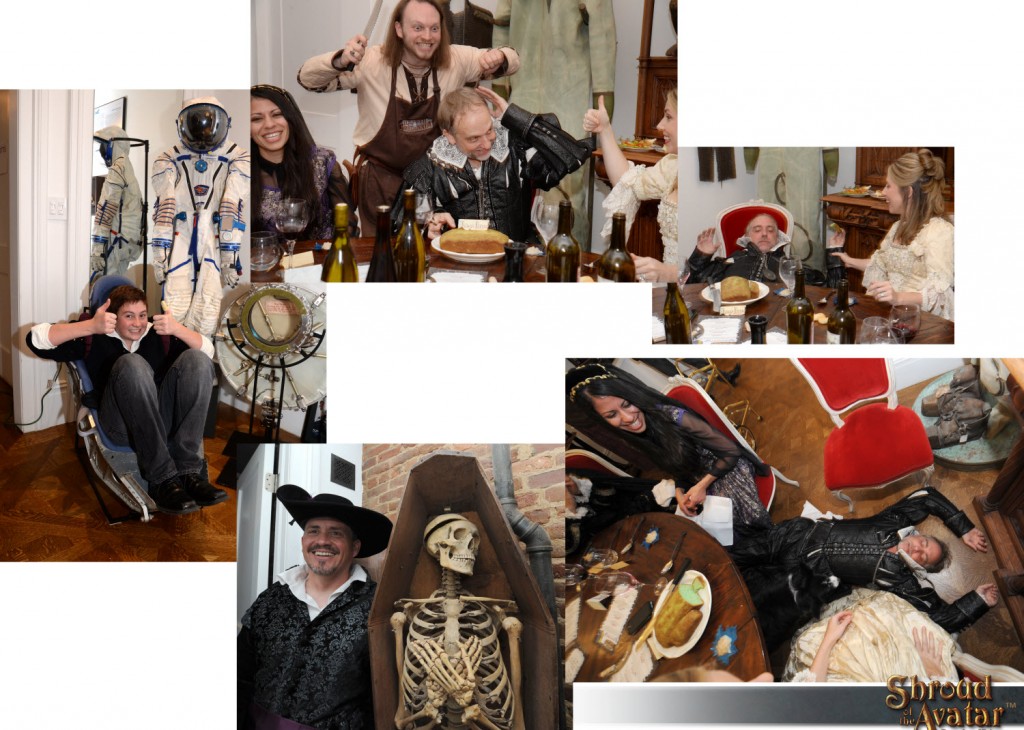 Fortunately, Lord British has an amazing ability to reincarnate no matter how many times he is killed, and managed to finish off the evening with a grand tour of Britannia Manor, and a final nightcap of 1955 Port: 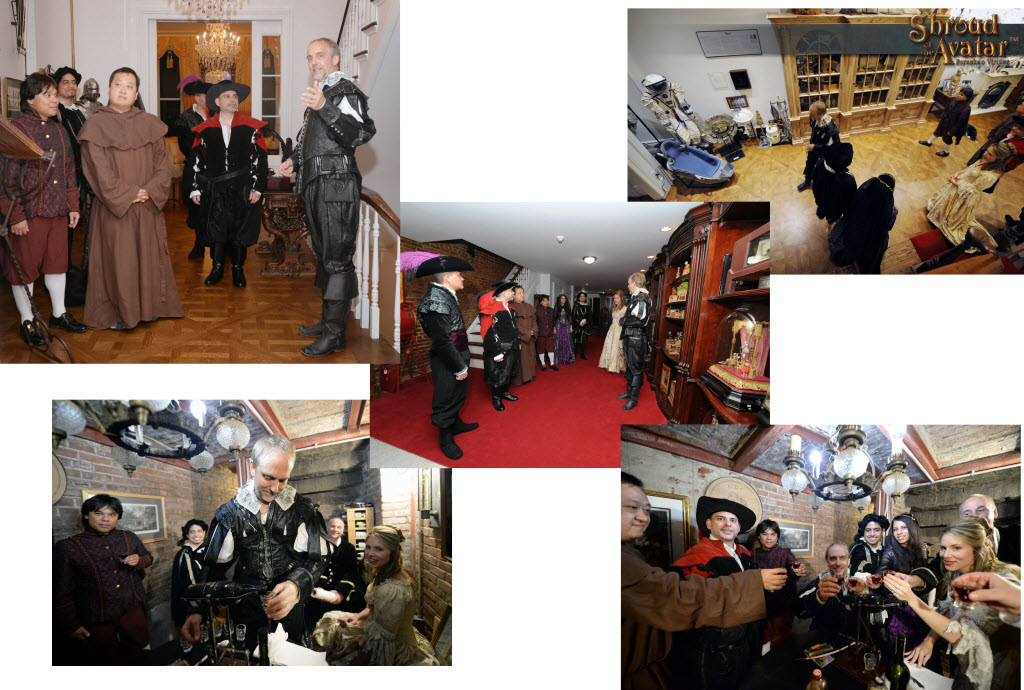 The Lord of the Manor City Home

Next up in our Parade of Homes, we have a Lord of the Manor Home! Bob Cooksey and Michael Hutchison have crafted a glorious home befitting the regal status of our Lord of the Manors. This home is available only as a reward in the Lord of the Manor Pledge level. A sprawling four-story mansion, comprised of nine spacious rooms, and open-air decks on the first and fourth floors! 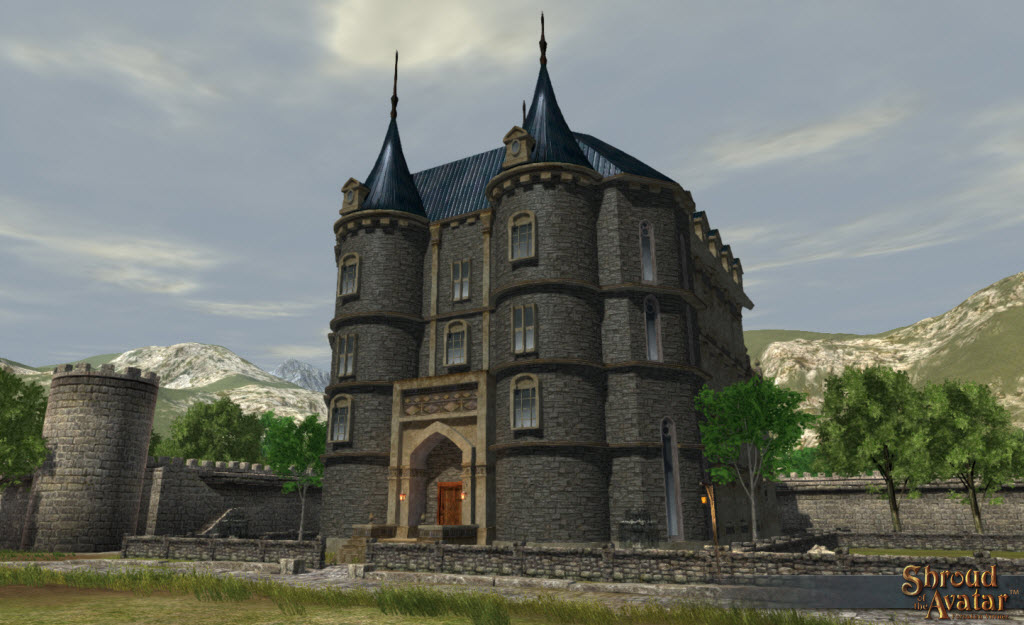 Here’s a view of the back: 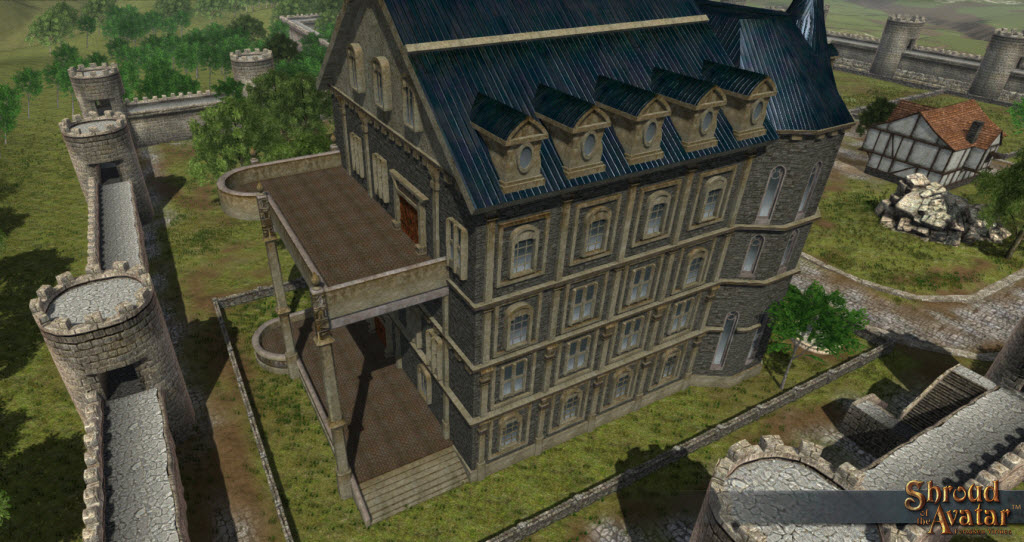 Here is a side-by-side view of the Lord of the Manor City Home, the Lord Town Home, and the Shingle-Roof Village Home (that comes standard with a Village Lot Property):

Here is an overhead view of the Lord of the Manor City Home, the Lord Town Home, and the Shingle-Roof Village Home. You can also see the different sizes of the City, Town, and Village Property Lots: 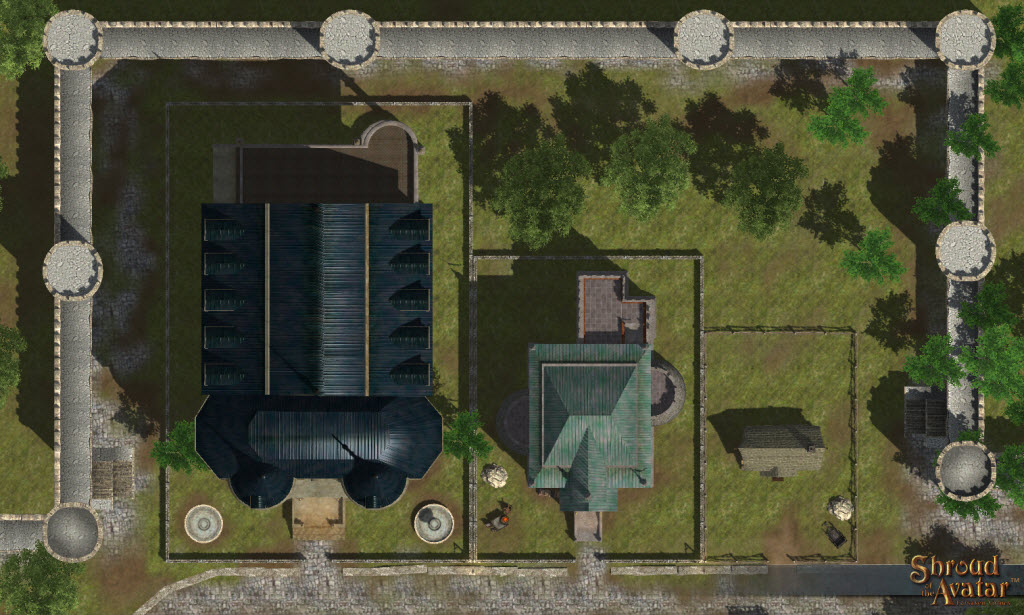 Bill Kirkman has been busy cranking out more basements. This image shows his 4-story Town Stone Basement, sitting beneath the Druid Town Home: 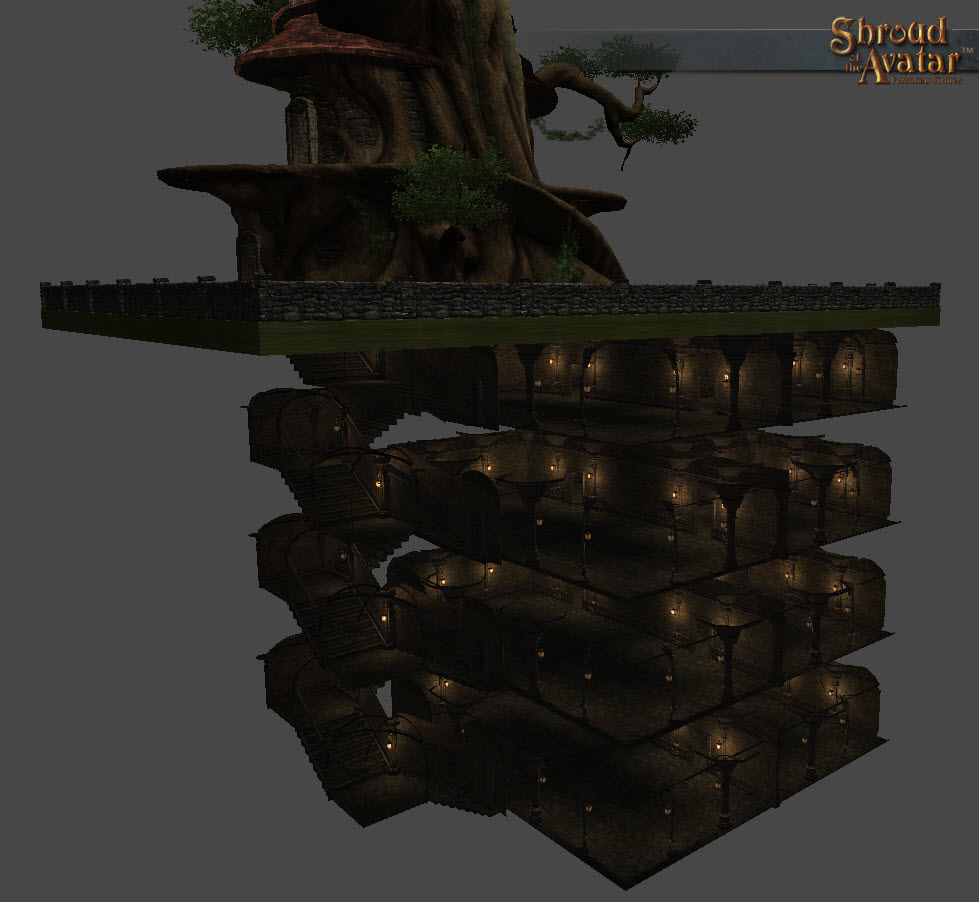 As you can see from the following overhead view, the Town Stone Basement, including stairwells, is almost as big as the entire Town Lot: 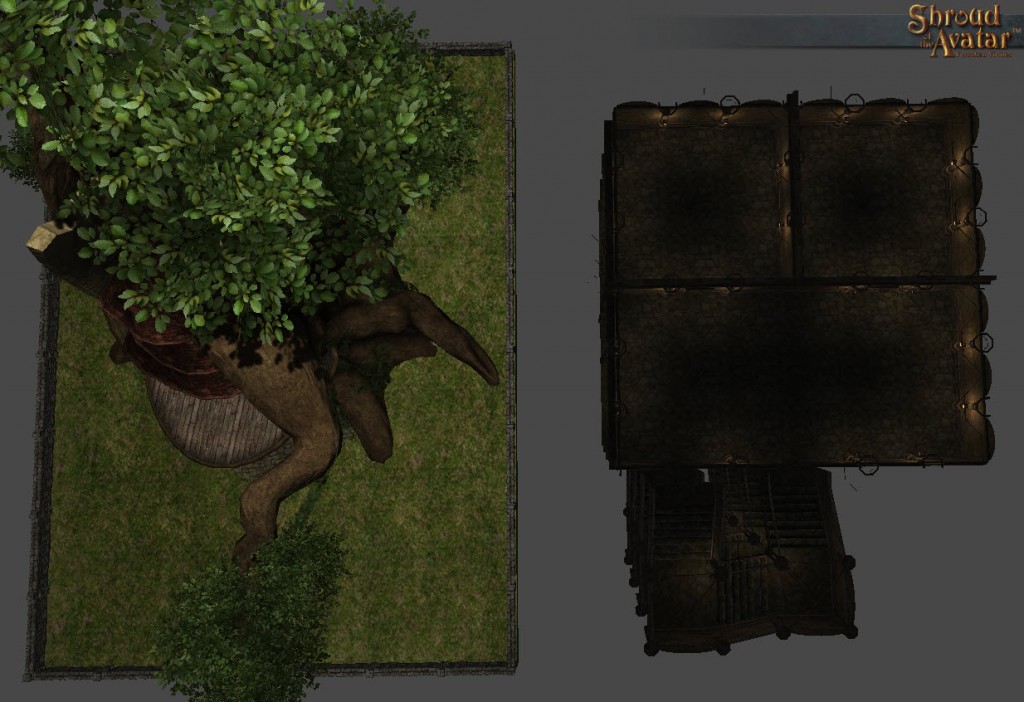 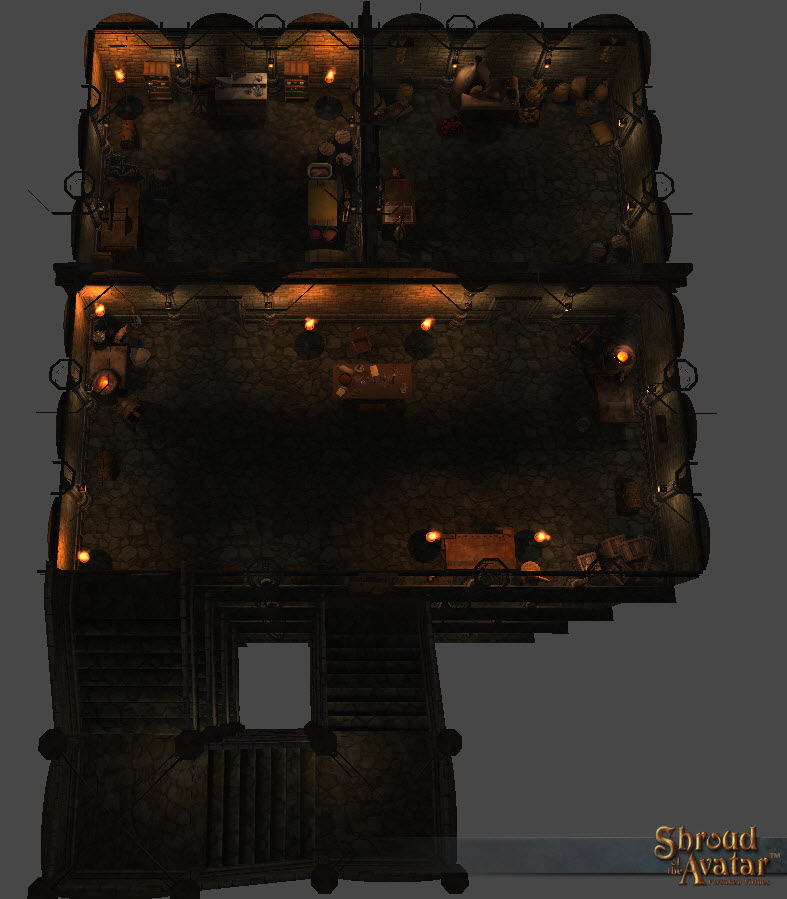 And here are a few sample rooms with decorations: 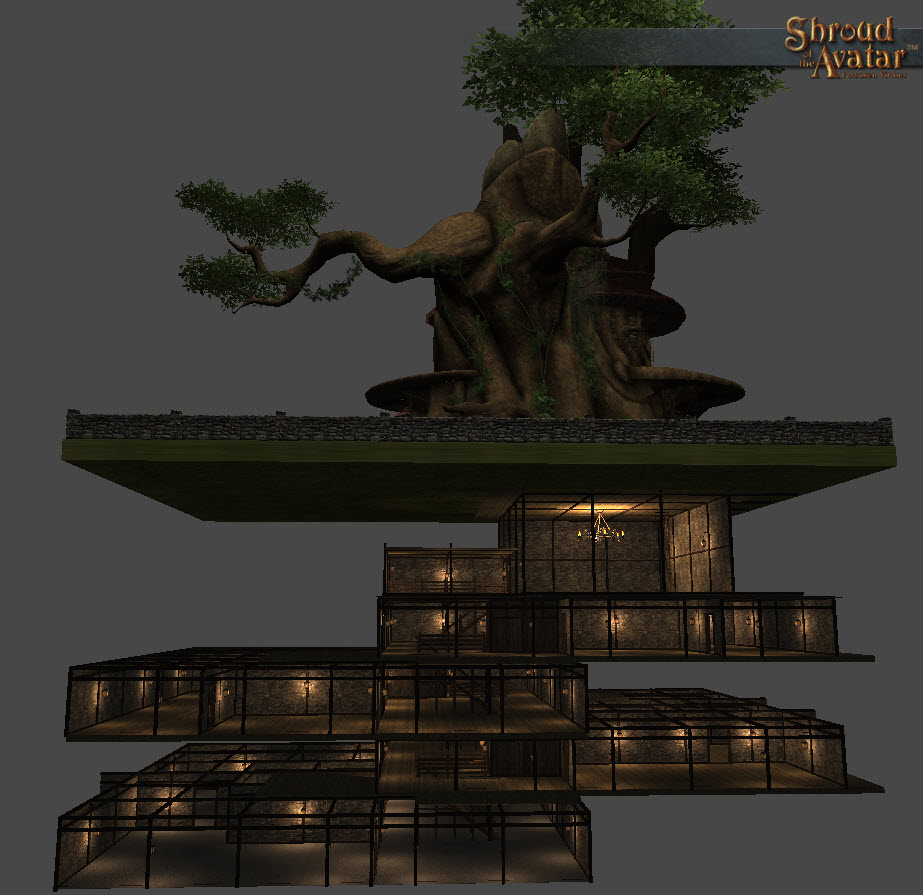 As you can see from this next image, the basement pretty much takes up the entire lot size: 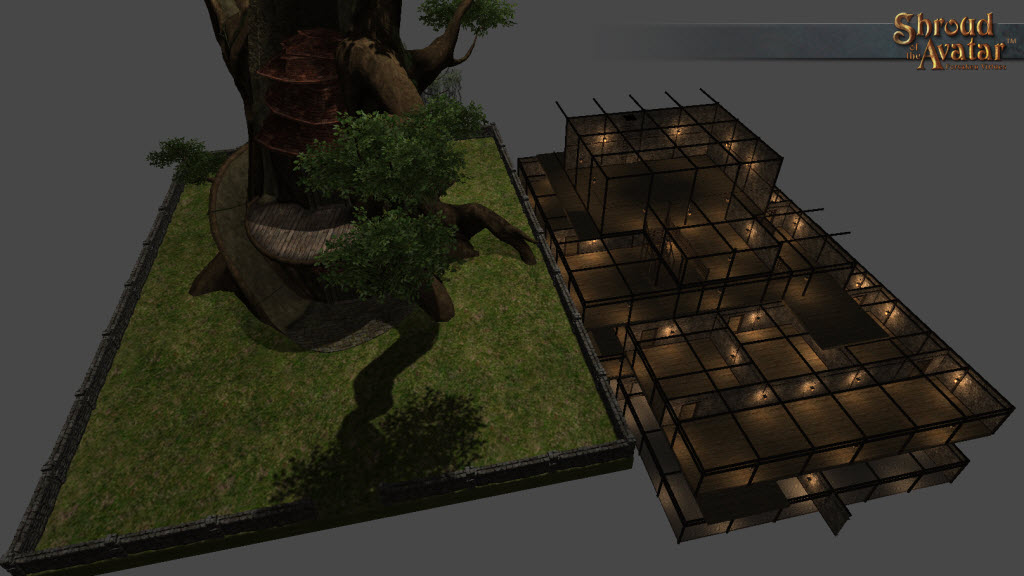 And here are some sample decorated room views: 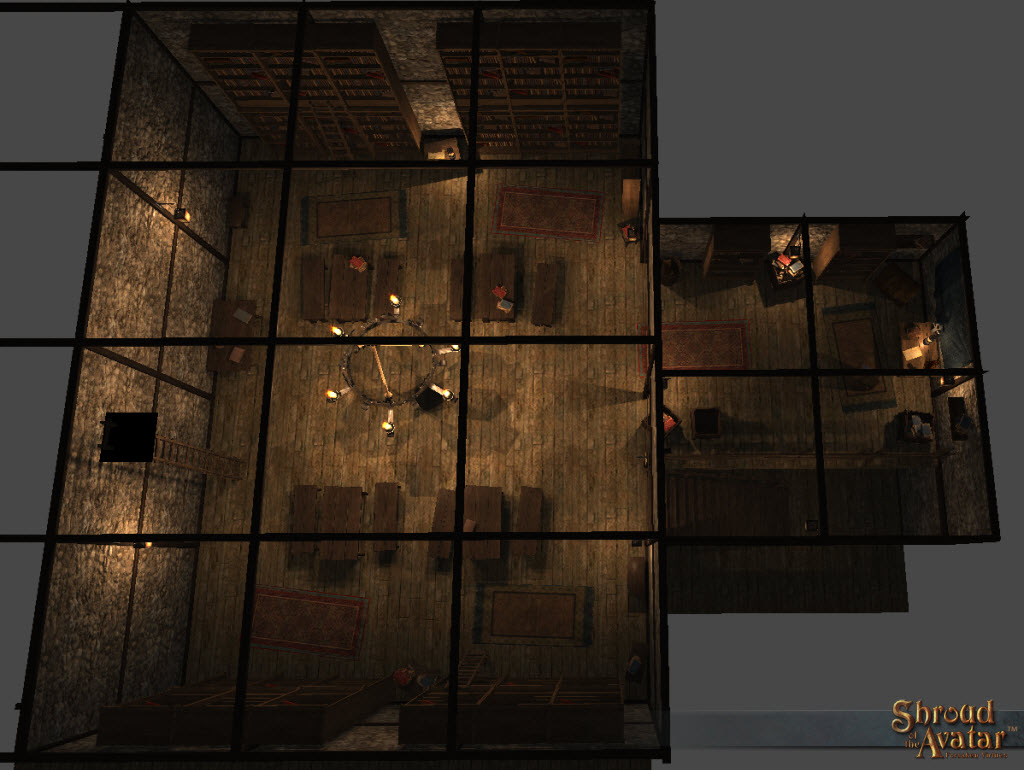 The challenge for Unity Scene Jam #2 was to help us create catacombs! There were tons of great submissions, and a number of scenes that were almost good enough for us to just add creatures and drop them in the game, which is truly amazing for a 48-hour jam. Tune in to next week’s Dev Hangout for a detailed analysis of the submissions.

This was the first time we used the new scoring system and it worked great! The top three scoring maps were 93, 90, and 88…all so very close! And the winners are:

Congrats to all who participated! Check out Chris Spears’ walk-thru video of the top three winners.

Scene Jam #3 has already started, so check out the details here.

Just a reminder that the friend referral special promotion ends in just two short weeks! In case you forgot the details, the top recruiters can earn the following:

For more details on the Recruit-a-Friend promotion, checkout Update #36.