This week’s edition of Update of the Avatar includes:

You wanted it! You earned it in our Kickstarter Stretch Goals! You waited for it! Well, wait no longer! Presenting… Spoony meets Lord British, Part 1!

We continue our Parade of Homes with the Benefactor Knight Village Home, available to Founders and Benefactors as a reward in the Knight level pledge. Bob Cooksey and Michael Hutch have designed a two-story, four-room home, with a split-level roof deck. 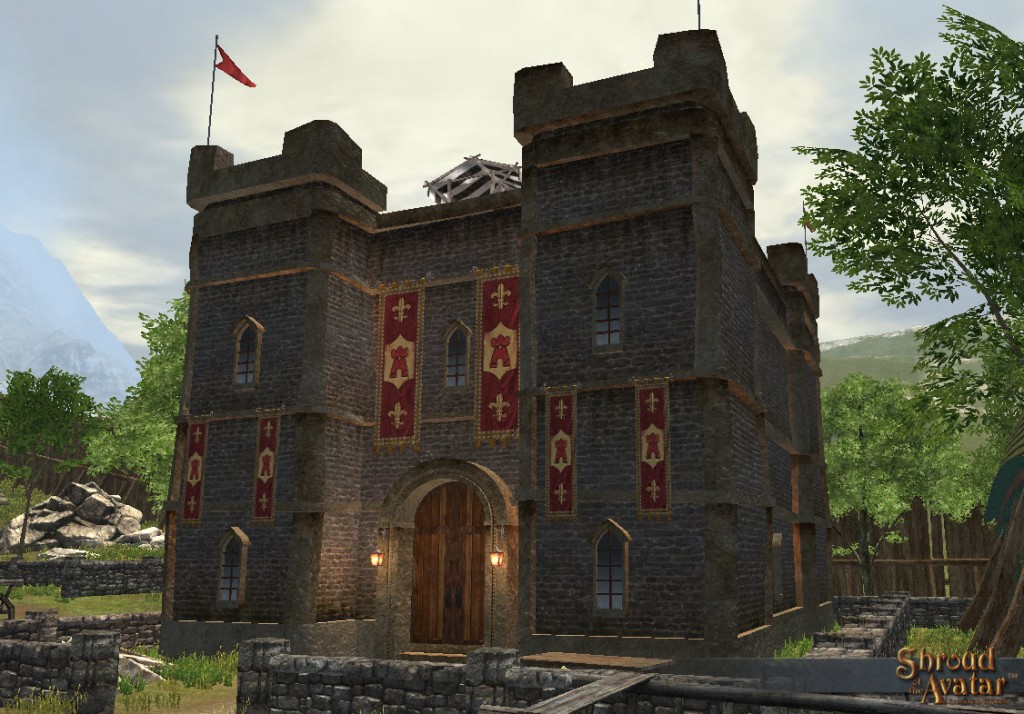 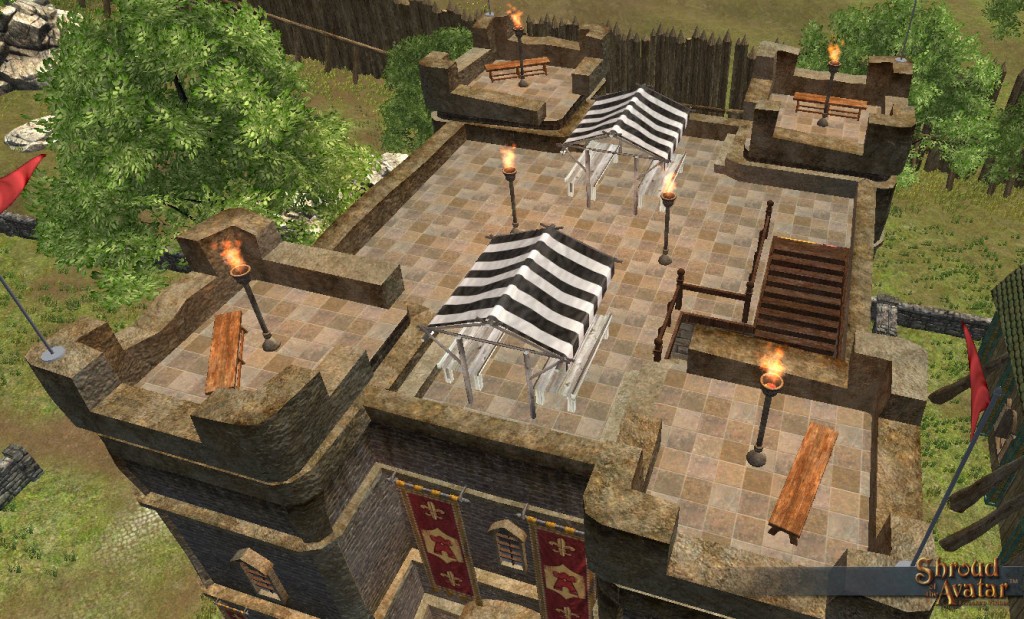 Here is a side-by-side view of the Benefactor Knight Village Home, the Viking Village Home (available in the Add-On Store), and the Shingle-Roof Village Home (that comes standard with a Village Lot Property):

Here are some interior views, with sample decorations by Bill Kirkman:

When we showcased the Founder Knight Village Home in Update #39, a thread was started in the forums to discuss it. In that thread, forum member Myrcello submitted this sketch outlining suggested improvements:

These were great suggestions, so we made the following improvements:

And here are some before and after shots of the interior views:

Greetings, traveller, and thank you for listening to my tales…

Before you depart, I would like to talk about a land you are likely to encounter on your way to Novia.

The Hidden Vale has been a land apart from Novia for generations now. The Oracle still seems to be aware of events there, as much as anyone can tell, but the people there hold no love for her. Most have migrated to the lands of the Vale because of their status outside the Oracle’s dominion over the years, and the affirmation chambers, so much a part of Brittany’s landscape, are absent here, though you still might be able to find a ruined one from the last time the Oracle’s servants attempted to build such. The people of the Vale believe themselves to be free, and they are quietly proud of this.

Until recently, trade ships from Brittany and Port Graff sailed the route to the Vale’s town of Kingsport regularly, if fairly infrequently. But within the past year, they have stopped completely, and no one can say why. Was it the Oracle, asserting control over her wayward flock once again? Or does it have to do with the prophecies, drawing ever closer to their appointed hour? It is the time of portents, after all, and this portent specifically bears ill for the people of the Vale. As little as they would care to admit, they became dependent on the goods from the trading ships, and Kingsport especially has fallen upon hard times. Bandits can be found in dark alleys plotting the disposition of what little wealth remains, and good people have fled.

Most of those refugees eventually find themselves in the bustling town of Owl’s Head. Owl’s Head has no King or Baron; the people have not nearly the patience for that. If anyone could be said to rule Owl’s Head, it is the captain of the local guard, Lord Delbart Enmar (the Lord in this case being more of an honorific, and a signifier that Enmar’s family has been guard-commanders for generations). Enmar has many concerns of late; the chaos beginning to consume Kingsport not least among them. But outside the walls of Owl’s Head there lie many dangers. Wolves prowl the farmlands in packs, threatening what little of the economy remains, and to the south past Kingsport the walking dead have just within the past few weeks emerged from a hidden fortress, to what end no one can say. And some even say a dragon is loose in the hills.

The Vale values its freedom, traveller, but its challenges are many, and its survival is uncertain. And your imminent arrival is not unknown to forces that mean you harm, traveller. For they know the prophecy as well as I, and your place in it. And they are not as concerned with your welfare as I…

This week you get two map reveals! 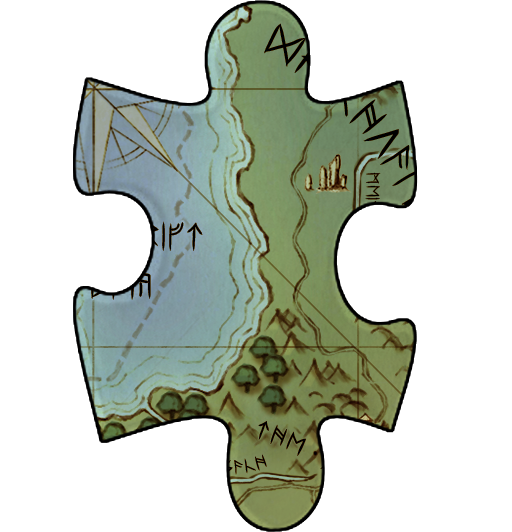 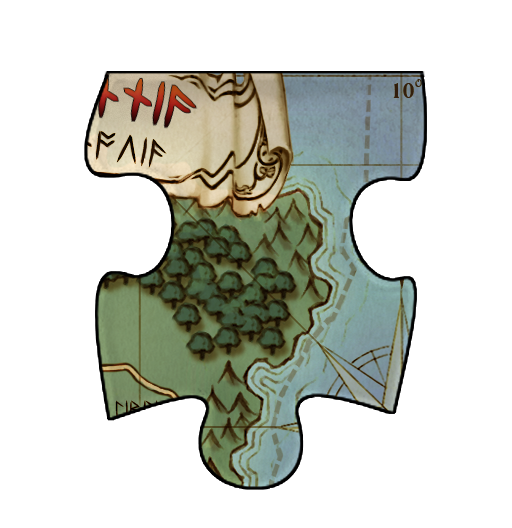 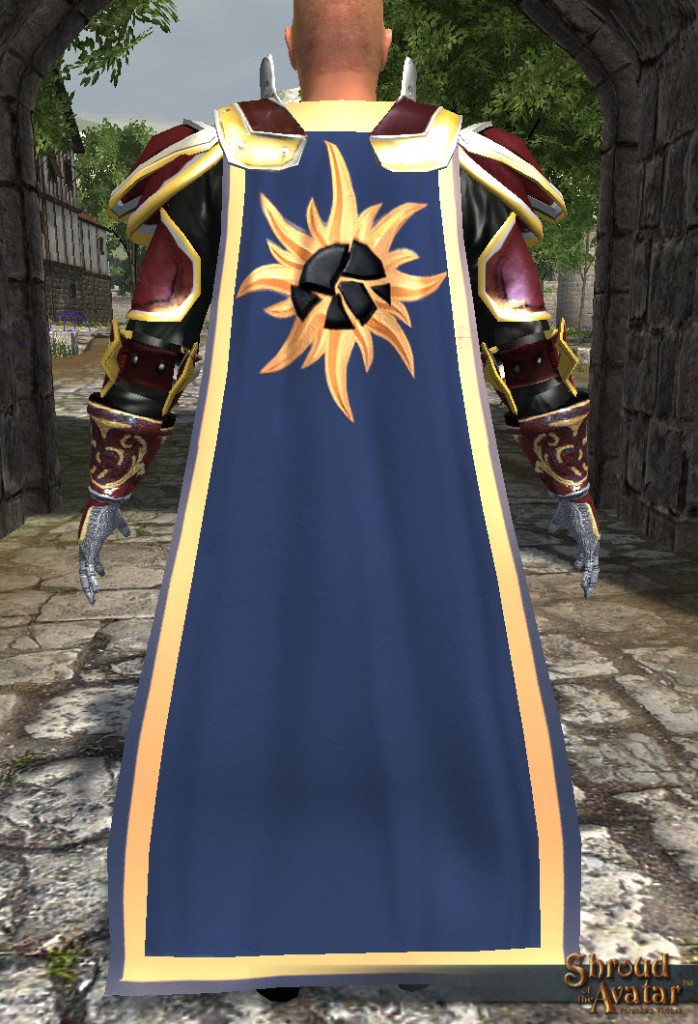 Be the first in your neighborhood to get the new Lord British cloak, beautifully adorned with Lord British’s Coat-of-Arms! There is a secret in-game effect that wearing Lord British’s cloak will invoke. Reserve yours in the Add-On Store now at an introductory 50% discount! 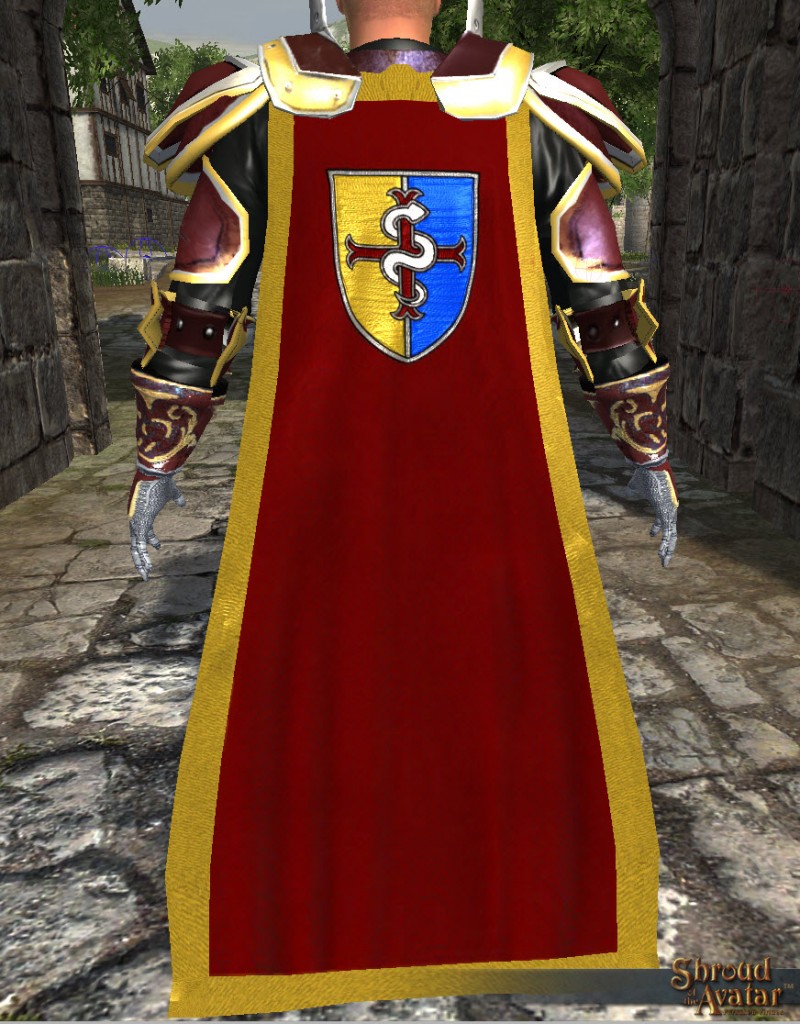 The Axe of Prosperity 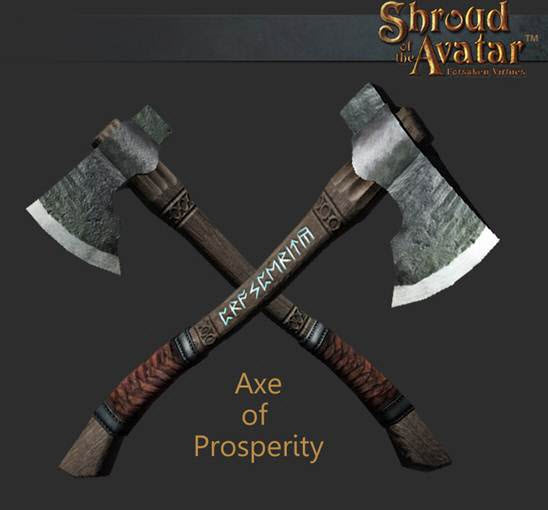 Next in our “Prosperity” line of unique items is The Axe of Prosperity!

This unique indestructible axe increases the quality and quantity of the wood harvested as well as increasing the speed of harvesting. While axes with similar effects can be crafted and purchased in the game this particular axe never needs repair.

Get Your Axe of Prosperity Now and save 33%!

For a limited time we’re offering a 33% discount on the Axe of Prosperity! Reserve yours at the Add-On Store!

Hearth of Britannia Lords of the Hearth Event

Rustic Dragon (aka Joseph Toschlog) hosted the Hearth of Britannia Lords of the Hearth (HoBLotH) event on November 16th & 17th, with Tracy Hickman as the Guest of Honor! The event was described as “…a dish-for-dish reenactment of the menu prepared for the Lords of the Manor Event that took place at Britannia Manor IV on October 5th, 2013. There will be food, potions, board games, boffer combat, rabble, Ultima speed run challenges, and more! Tracy will be leading us in a few rounds of Sojourner Tales, his and his wife’s recently Kickstarted board game!”

Head over to Forsaken Virtues for Dame Lori’s excellent recap of the weekend’s festivities: http://forsakenvirtues.com/2013/11/18/hearth-of-britannia-hobloth-lords-of-the-hearth-event-success/ 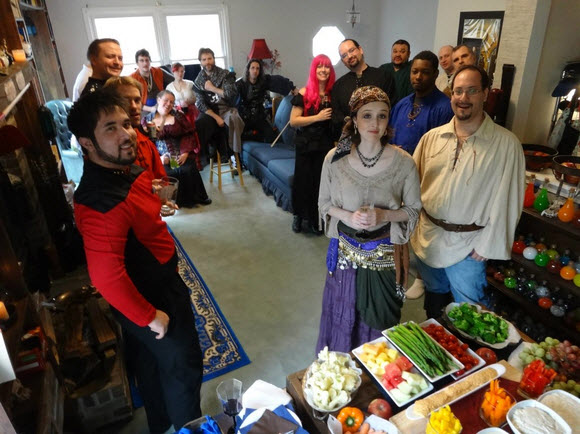 Tis’ the Season: Gifts of the Avatar

Just in time for the holiday season, we’ve added the ability to purchase Shroud of the Avatar pledges or Add-On Store items as gifts! To gift a pledge or Add-On item to some lucky individual, just click on the “Gift” button beneath the “Pledge” button or beneath the “Grab Add-Ons!” button and follow the instructions.

Gifts can be sent to existing backers or to someone that wishes they were a backer, all you need is their email address. The gifted pledge or item will show up on your account page as a pending gift until it is accepted.

Movember: Shroud of the Mustache

Only one week left for Movember! In an unprecedented show of support, many of SotA’s supporting cast members donned mustaches for the final countdown! 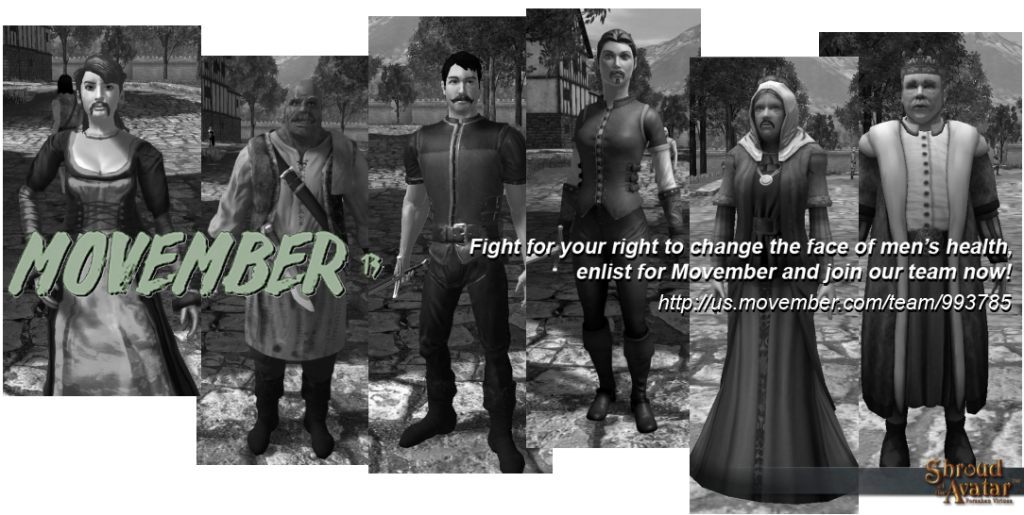 Please join us and support a great cause!

Globally, the funds raised by our Mo Bros and Mo Sistas support world-class men’s health programs that combat prostate and testicular cancer and mental health challenges. These programs, directed by the Movember Foundation, are focused on awareness and education, living with and beyond cancer, staying mentally healthy, living with and beyond mental illness and research to achieve our vision of an everlasting impact on the face of men’s health.