Wow! Our amazing community demonstrated to the world just how passionate and supportive they are by casting their vote for Shroud of the Avatar and making it the #1 Most Anticipated Game of 2015 in Ten Ton Hammer Readers Choice Awards! And this followed closely on the heels of all of you driving SotA to the #1 spot in the Massively Readers Choice Most Anticipated MMO of 2015 and Beyond!

Thank all of you so, so much for your passion and your support!

MMORPG’s Players Choice Awards for Most Anticipated MMO of 2015

Winning these Readers Choice awards is extremely valuable in helping to spread the word about Shroud of the Avatar and our passionate community to those people who haven’t heard of us yet! We really appreciate all of you that responded to our request earlier this week to vote in the MMORPG Players Choice Awards. You quickly drove us to within 4 points of EQ Next at the #1 spot.

But the competition at MMORPG has been fierce and over the past couple days we have slid to the #4 spot, behind EQ Next, Black Desert, and Warhammer. It would be pretty awesome if we could make this a “three-peat” but with such fierce competition we’re really going to need all of your help to regain our forward momentum! Some of you reported in the forums that MMORPG asks a lot of questions during their registration process, which is required before you can vote. We agree that they appear to ask for a tad more information than other sites, but we hope that doesn’t put you off from voting!

Winning these awards helps grow our community, which helps all of us to make SotA even better, so please help make that happen and follow this link to go cast your vote for Shroud of the Avatar in MMORPG’s 2015 Players Choice Awards! 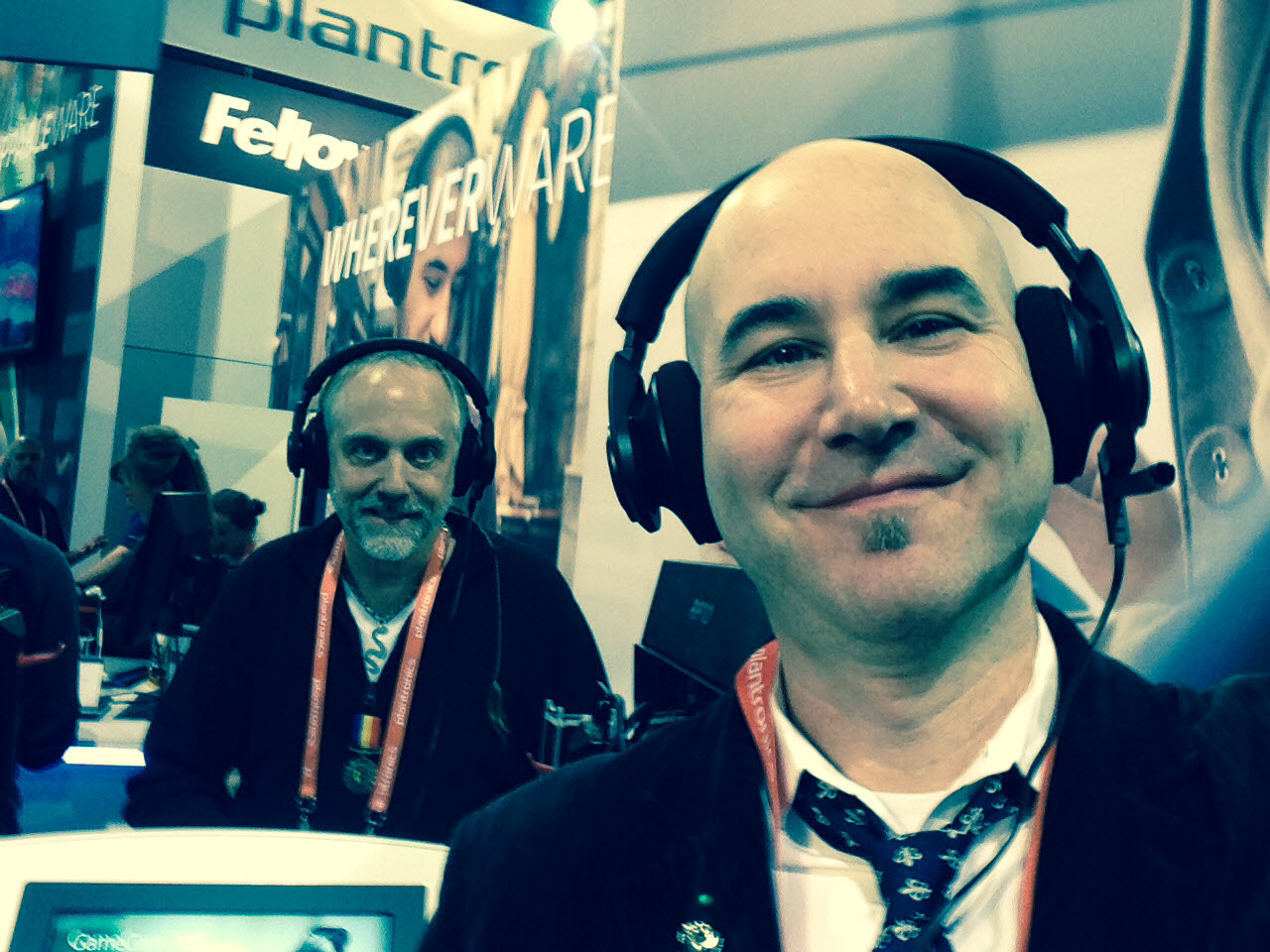 Richard Garriott and Starr Long spent most of this week at CES in Las Vegas demoing how awesome the SotA audio sounds with Plantronics headsets! They were able to schedule several interviews with the press, so be on the lookout for those articles coming out soon.

Gamers Nexus got the jump on the other news sites and already published their article entitled “Shroud of the Avatar Trailblazes Future of RPG Community Involvement – Richard Garriott Interview.” Check it out if you haven’t seen it yet! 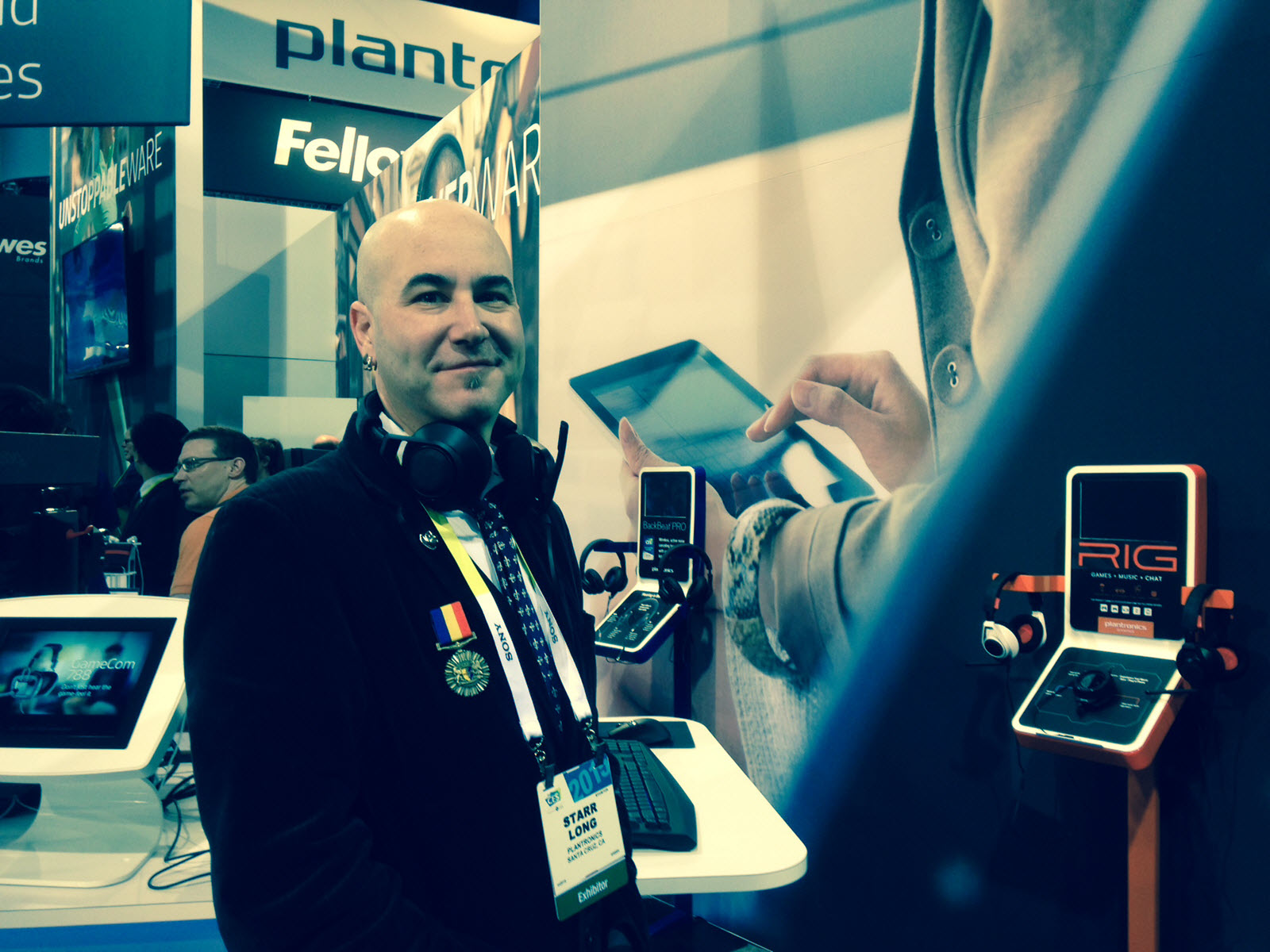 Shroud of the Avatar- A Year of Portalarium: 2014 in Review 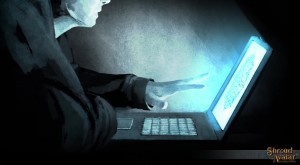 GolemDragon posted an amazing article on the Ultima Codex site entitled “Shroud of the Avatar- A Year of Portalarium: 2014 in Review“. He starts the article by saying:

As Kenneth likes to do “A Year in Review”posts on Ultima Codex, He and I are both pleased to bring you, Shroud of the Avatar – A Year of Portalarium: 2014 in Review, in which we look at the news related to Richard Garriott, #Portalarium, and #LBSotA that came out in the last year. As you can see we have everything organized monthly. Enjoy!!!

He then provides a summary of the key SotA events for each month, with links to the original material. He closed by saying:

It really has been an amazing year. Alot has changed for Shroud of the Avatar. We have multiple systems that have been created and are in the stage of being expanded, changed, and polished. Other systems still have yet to be developed and so 2015 will be another year of major changes. Many community members have only just started their own community projects or have moved on from past projects to new projects. May you all look back on 2014 as a good year of development for SotA and look forward to all 2015 may bring us.

We encourage you to check out GolemDragon’s 2014 in Review article at Ultima Codex because it truly captures what an amazing year 2014 was for all of us traveling this journey together!

Just as in our past few releases, we’re including a Grand Tour Quest in R14 designed to guide you through all the new content. By completing the R14 Grand Tour Quest you will be rewarded with a Hennin (popularly known as a “princess hat”). This reward can only be unlocked during Release 14 (did someone say rares?), so be sure to log in to R14 starting January 29 and talk to all the Tour Guides! 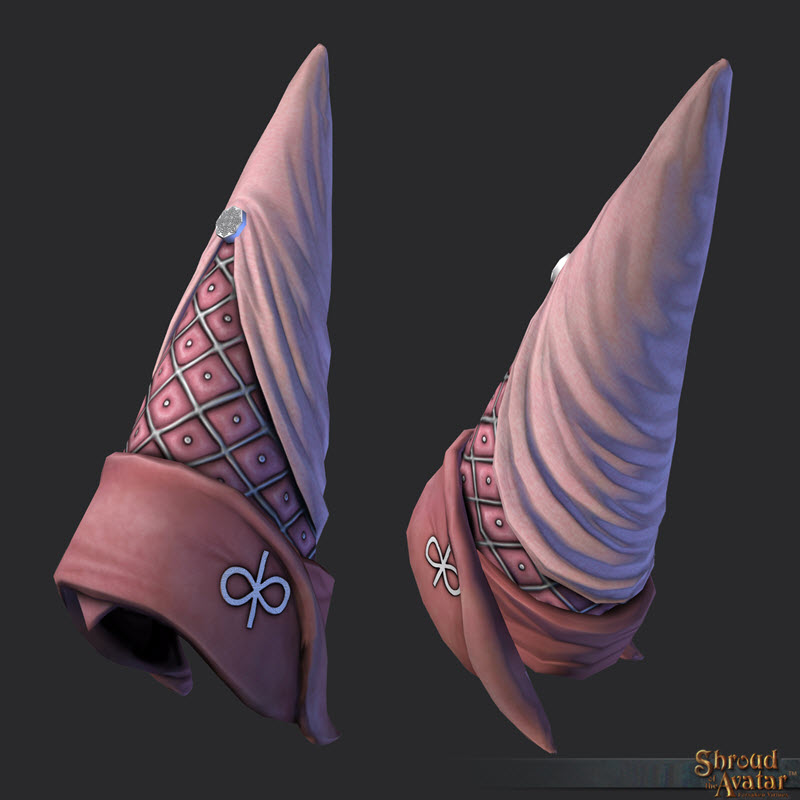 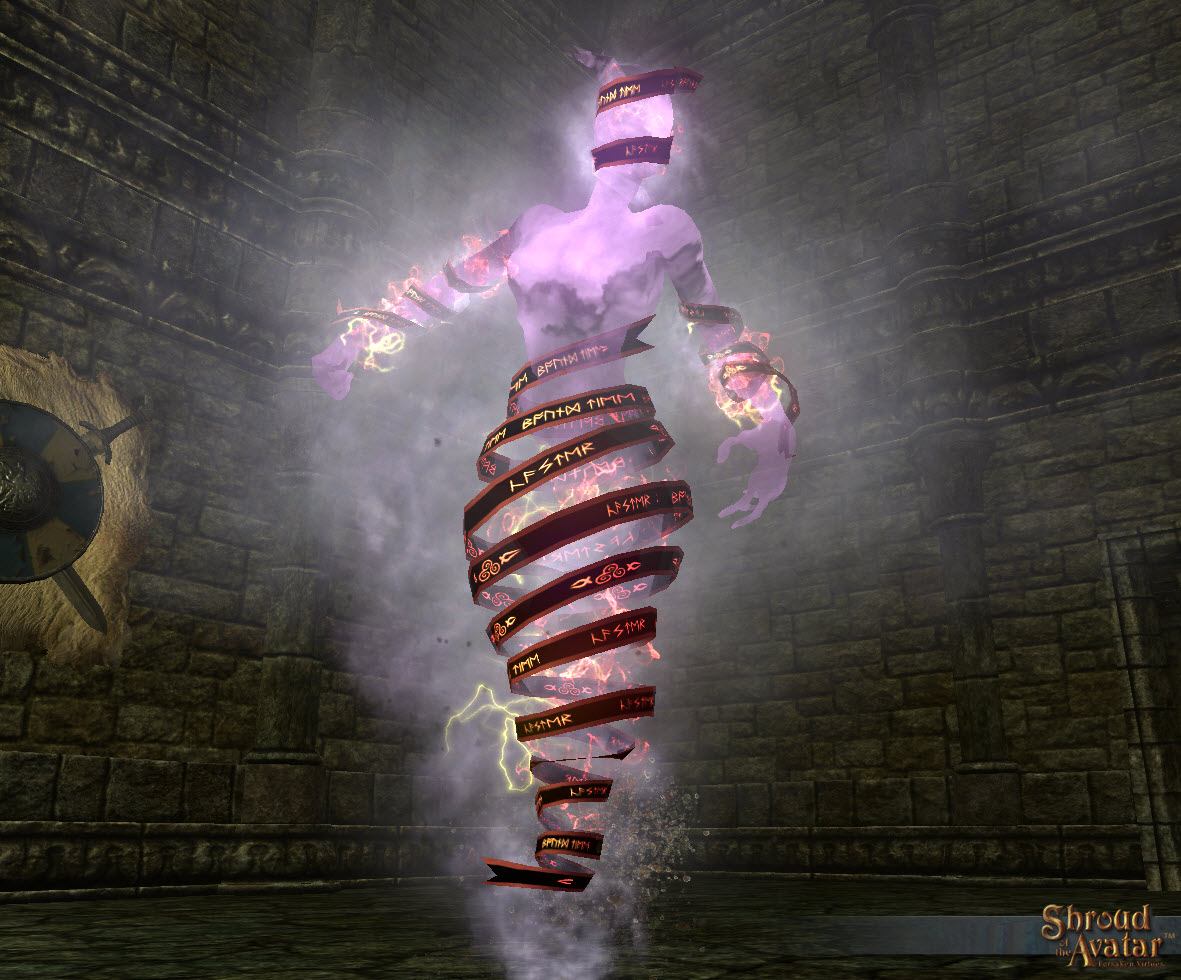 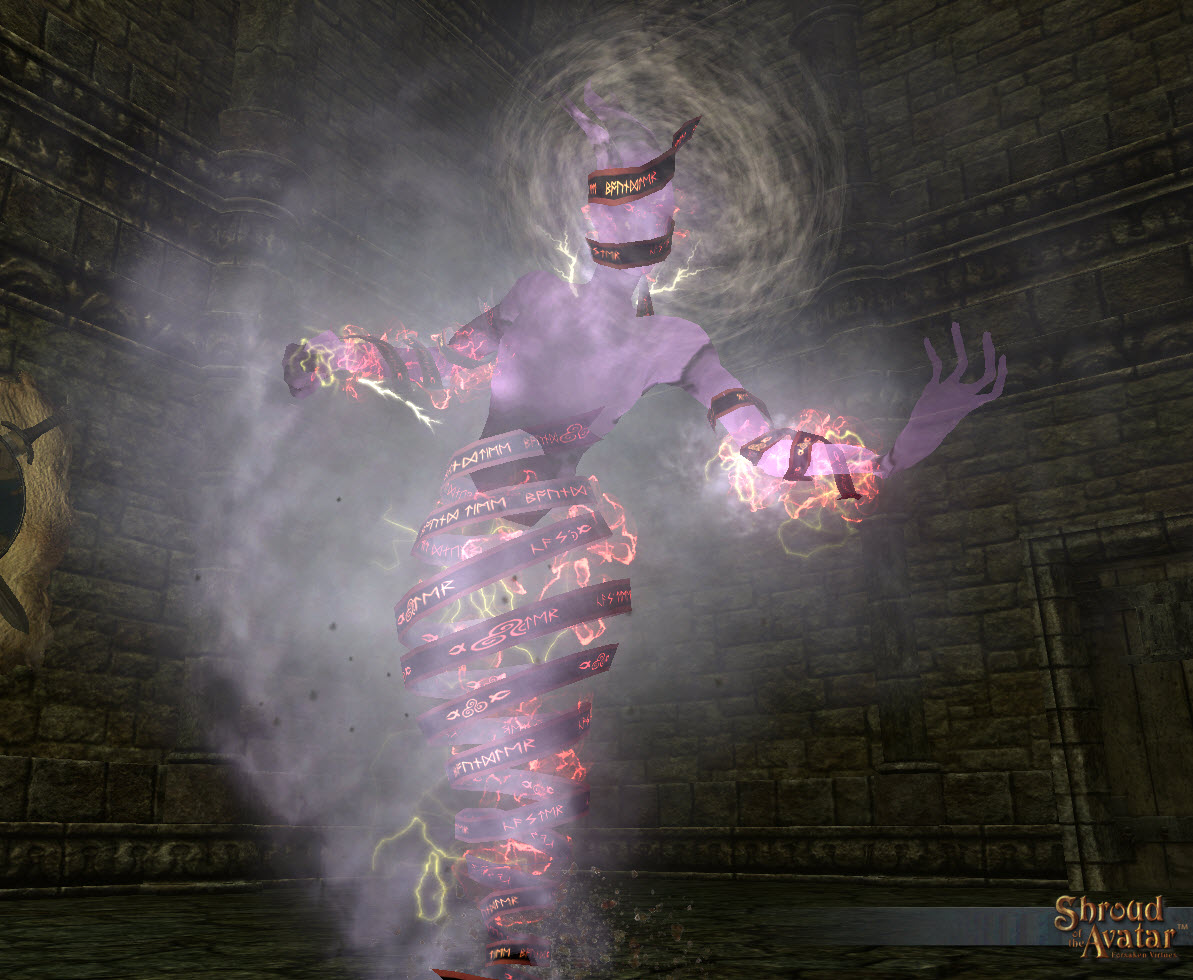 Summoned Elementals are surrounded by magical bindings that keep them under the thrall of the summoning mage whereas wild elementals are free of these constraints. Here are the Earth and Ice Elementals with and without the bindings: 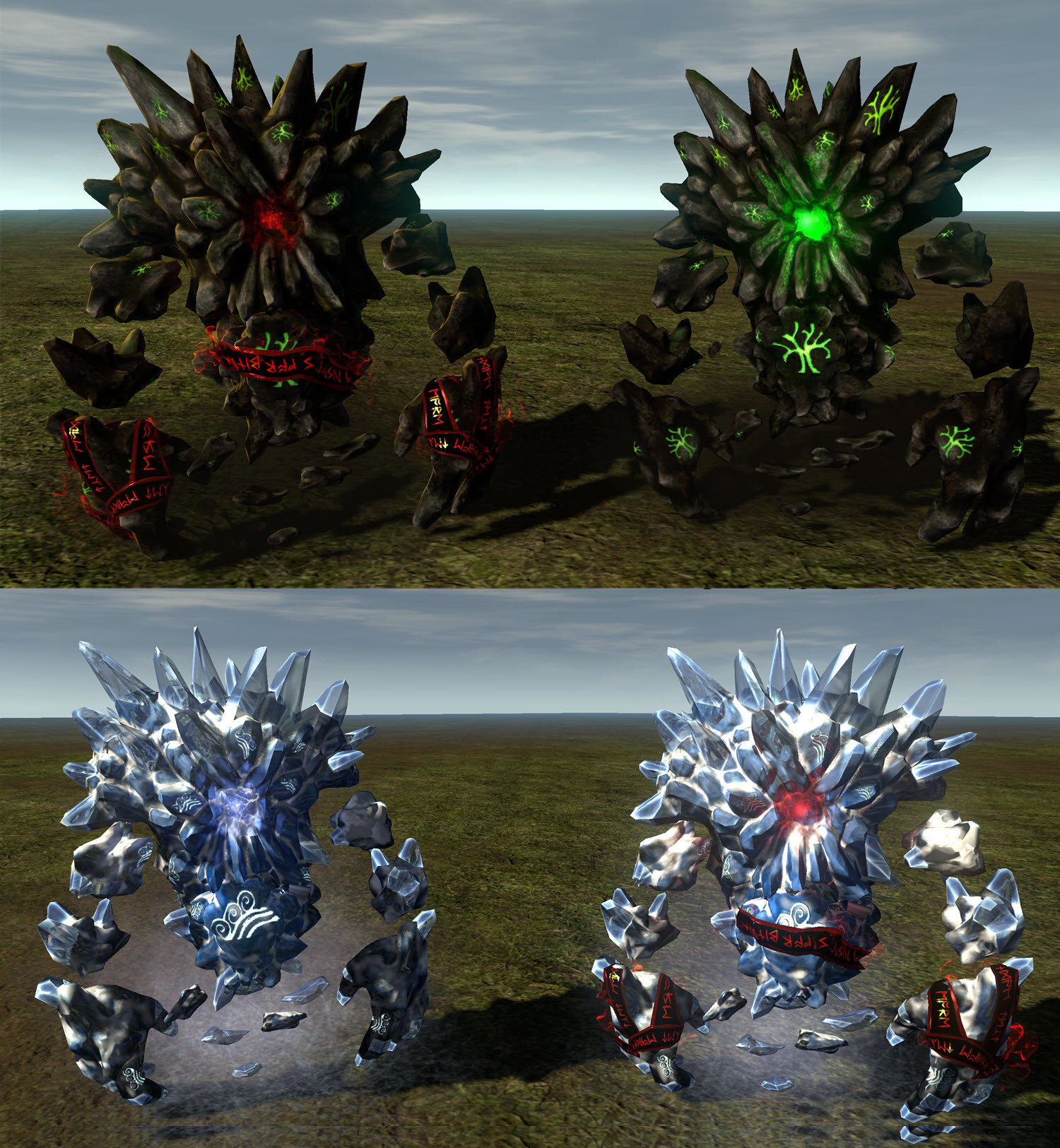 While we were doing this work we also decided to create another class of creatures similar to Elementals called Golems and we decided to use our former Ice Elemental as the model for them while making the Ice Elemental use the same mesh as the Earth Elemental. You can expect to see all these new elementals and Golems to begin appearing in Release 14 and 15. 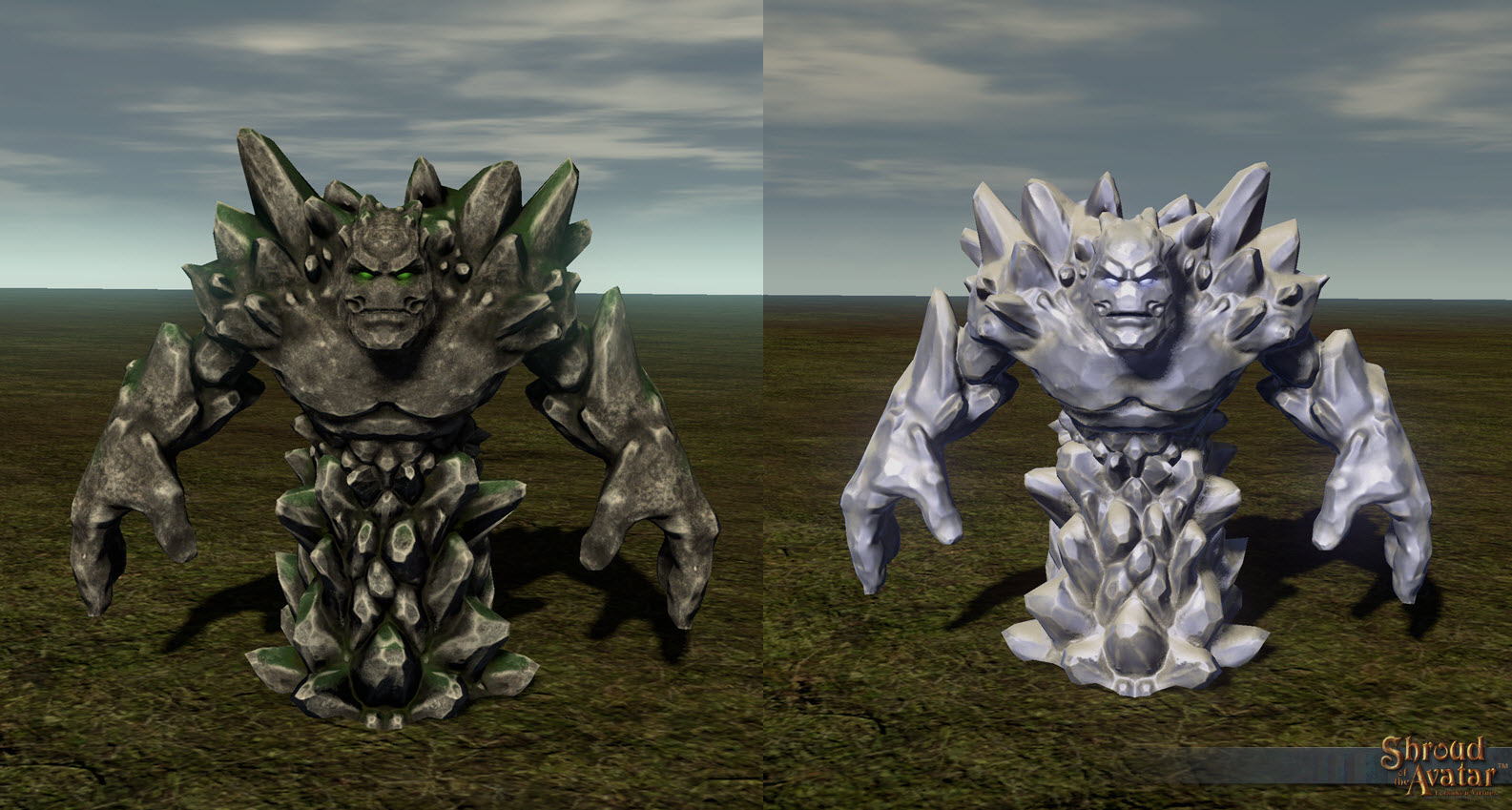 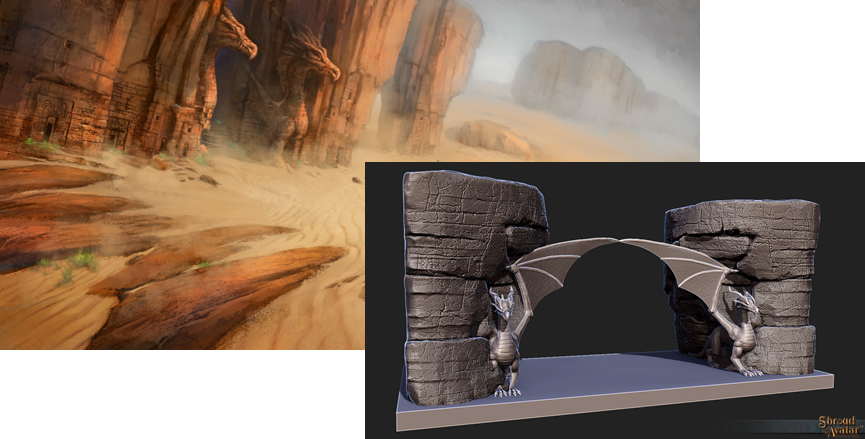 Last week we showed Andy Cortez’s work-in-progress of the Dragon Pass sculptures based on Stephen Daniele’s concept art. Andy made significant progress during the week, and here’s an in-game shot of the latest version: 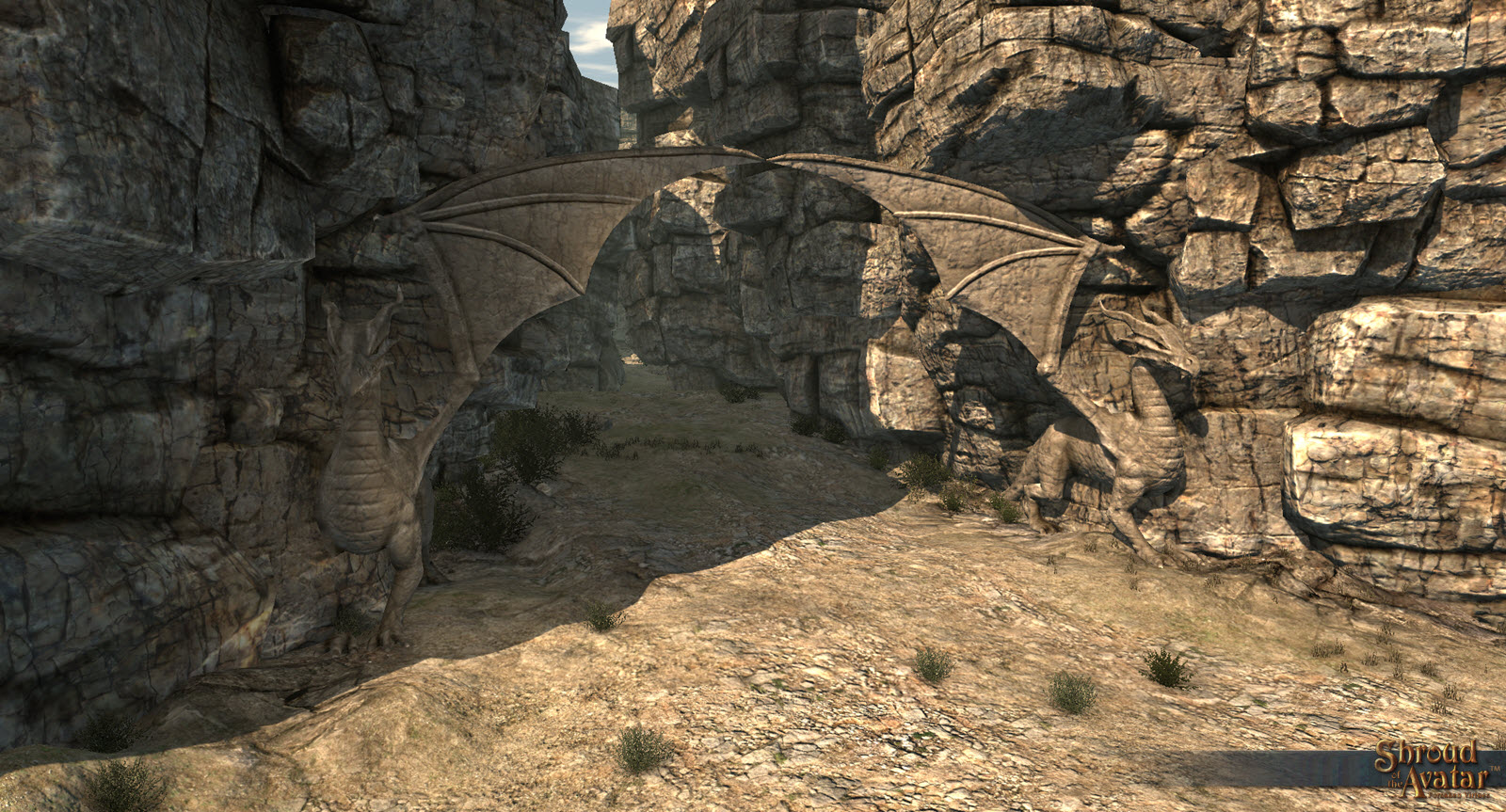 The Avatars Chronicles I – Return of the Avatar: Special Developer Edition 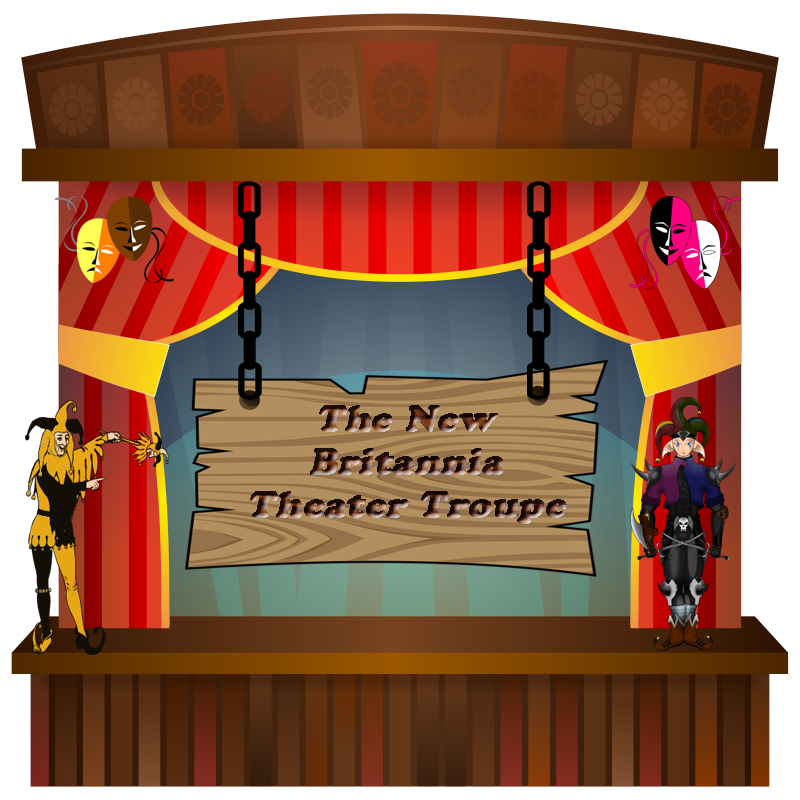 The New Britannia Theatre Troupe along with AvatarsRadio.com and TheCaverns.net are proud to present a theatrical voice presentation of astronomical proportions. The long awaited sequel to Once Upon A Time Lord; The Avatars Chronicles I – Return of the Avatar: Special Developer Edition. Coming to an Aether Vibration Amplifier near you Saturday January 17th 2015, 11am Central Time.

“…Set on another New Britannia, in a parallel universe this saga chronicles the adventures of an unlikely group of heroes who have banded together to save their realm from dark forces which threaten its very existence…“

30 amazing voice actors from our very own community. Four of the communities favorite developers: Richard Garriot, Starr Long, FireLotus and Stephen Daniele. Hundreds of hours of work. All come together to bring the community one of the most epic sized productions to be entered into the history books.

We invite you to join us all Saturday, January 17th 2015 in the Church of the Dark Star in PaxLair, Valemark in the Hidden Vale and on Avatars Radio for a fantastic listening party! Be one among your friends to be able to say “we were there when this happened!”.

The Avatars Chronicles I – Return of the Avatar: Special Developer Edition. The heroes look forward to seeing you there.

Sir Stile Teckle is also holding a contest during this event for great prizes. You will need to be listening in order to win! Among these prizes are dice from great community groups such as: The New Britannia Theatre Troupe, TheCaverns.net and the Round Table. Grand Prize will be randomly drawn from a list of entrants who answer all questions correctly. This grand prize will be: One Foil Print Shield of the Avatar signed by Lord British.

Be sure to be listening to Avatars Radio and keeping a watch on TheCaverns.net and The Shroud of the Avatar Forums for further information, contest rules and the questions to be answered to enter into the grand prize drawing.

Our amazing community has another great lineup of in-game events planned for this weekend. If you missed out on these player events during the previous Releases, we highly recommend you check some of them out this weekend. Here is the latest schedule of player events from the Avatar’s Circle Community Events calendar (http://avatarscircle.com/community-events/):

Every week going forward we are removing select items from the Add-On Store, so if you want them you better get them before they are gone! Over the past few months we’ve phased out over 20 items, including such items as the Scissors of Prosperity, Blade of the Avatar Cloak, and Shingle-Roof Village Homes. This week, the following items are available for an additional 20% off, and then will no longer be available in the Add-On Store.

The Sickle of Prosperity

This unique, indestructible Sickle increases the quality and quantity of the foraged items (herbs, mushrooms, berries, etc.) as well as increasing the speed of foraging. While sickles with similar effects can be crafted and purchased in the game this particular sickle never needs repair. 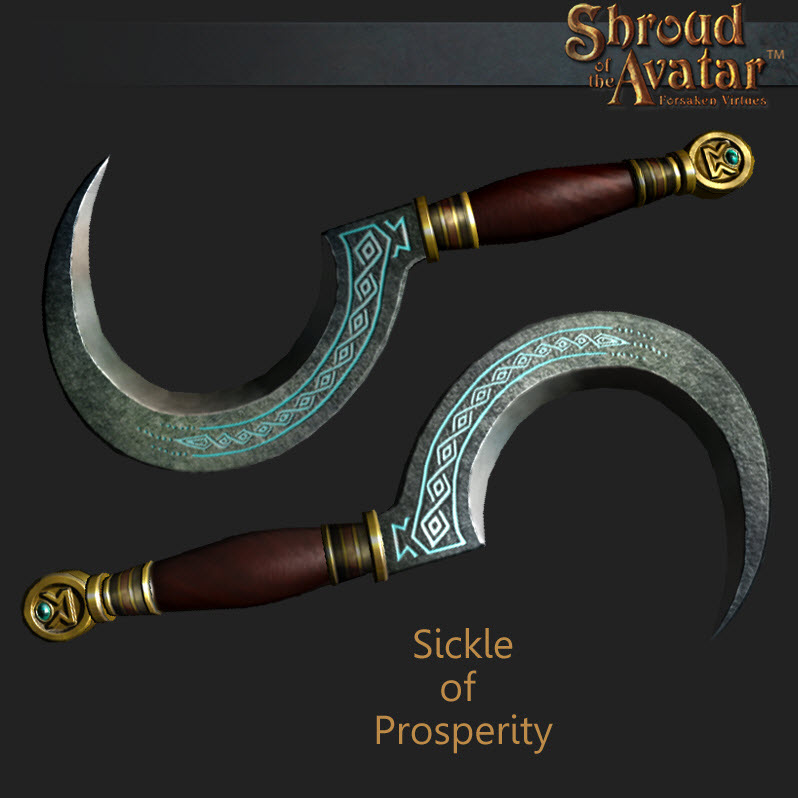 For those of you looking for something truly unusual that makes a statement (or if you’re just really into Druids), then the Village Ring of Stones is just the thing for you! You may recognize this structure as the stones surrounding the Lunar Rifts in the game. 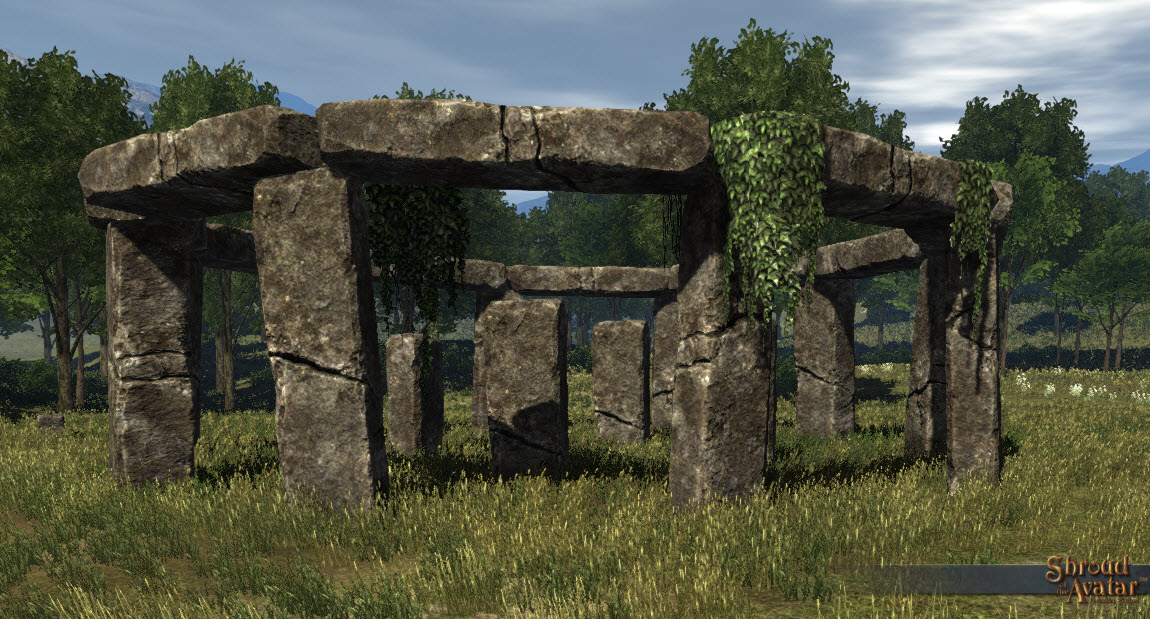 SotA successfully launched on Steam Early Access on November 24, and we’ve made Steam Access Keys available to all our backers as part of their basic pledge rewards! Once you’ve redeemed your Steam Access Key you’ll have the option of playing SotA either with the Steam client or the regular game client (or both). 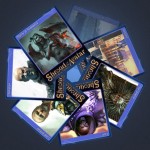 If you play SotA on Steam you can collect the SotA Trading Cards! Collect a full set of SotA trading cards to earn SotA badges, profile backgrounds, and emoticons that help you customize your profile and show off your Shroud of the Avatar gameplay. Check out Steam’s trading card FAQ for more information.

How to Cancel Monthly Payment Plans

Remember that Pledge payment plans are not canceled automatically after reaching the desired pledge. You must manually cancel your monthly payment plan, which can be done at anytime on your SotA Account page. We apologize for any inconvenience this might cause, but it is a result of how recurring billing functions with PayPal, Amazon, and Stripe (our credit card service).