As revealed in the Release 55 Livestream we have launched the Stretch Goal store for Episode 2! These are stretch goals with rewards that can be used in the game now (or at least very soon)! When you purchase the item you will get it as an in-game reward immediately (or very soon if the item is still in progress), even if the stretch-goal is not met. These rewards are completely unique. They will not be sold in the add-on store, in-game nor as a bundle item. Once the stretch-goal is met we will begin work on the functionality for Episode 2 and all the items purchased would gain some function related to the goal when Episode 2 launches. For instance the foal from the Mounts stretch goal would grow into a horse that you could then ride. Each goal will have a progress bar underneath tracking the progress. General philosophy is that these items cost slightly more than equivalent items because they are linked to stretch goals.

We are starting with the Mounts Stretch-goal and will add further stretch-goals over the next several months including Flexible Lot Placement, Pack Animals, and Elven Playable Race. NOTE: Many of these items are similar to the previous stretch-goal store items but these are different and unique.

Mounts: Players will be able to ride horses around the game (including horses tamed in the game)! These baby horses will grow up to be fully grown and mountable horses when this feature goes live in the game. NOTES: There will be some kind of summon mount emote / key. When mount appears you automatically vault into the saddle. Cannot fight while mounted. If you are hit / enter combat while on horseback you are knocked from your horse. Mounts cannot be ridden indoors or underground. 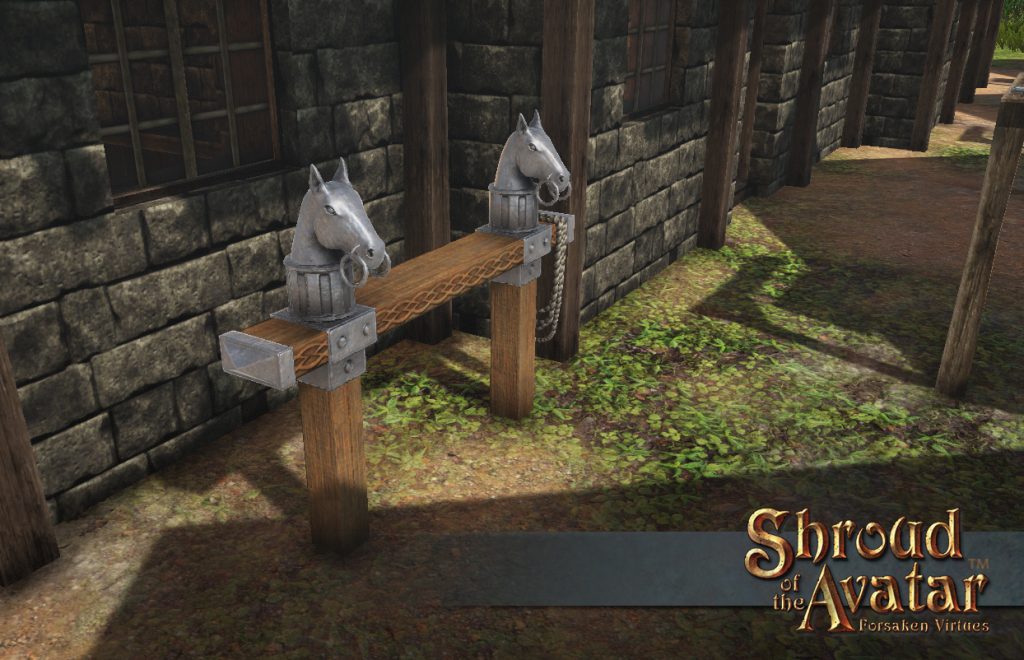 Roan, Appaloosa, and Dun Foals: These foals (baby horses) can be used as non-combat pets that are both placeable as decoration pets on a property, and will follow you around town! If the Mounts stretch goal is met for Episode 2, these horses will grow up into rideable mounts! 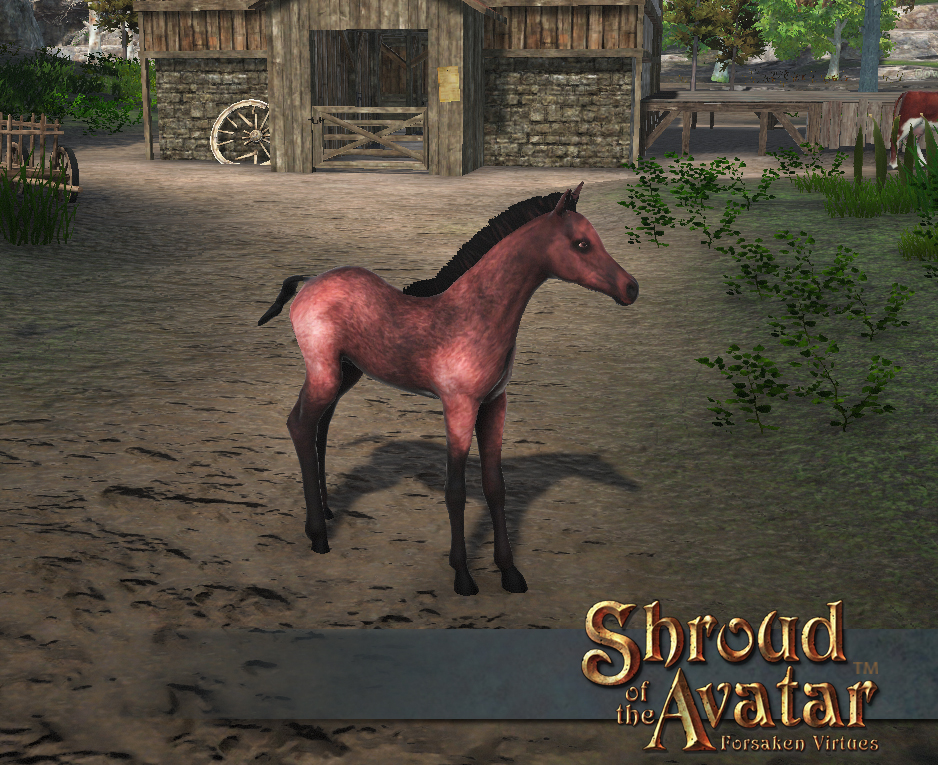 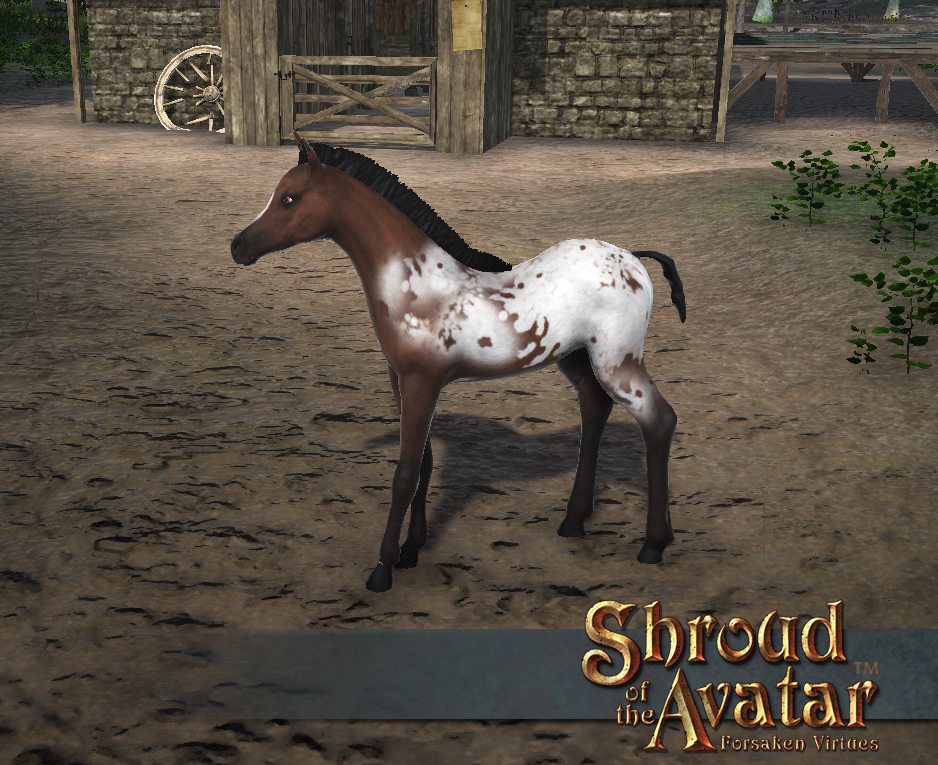 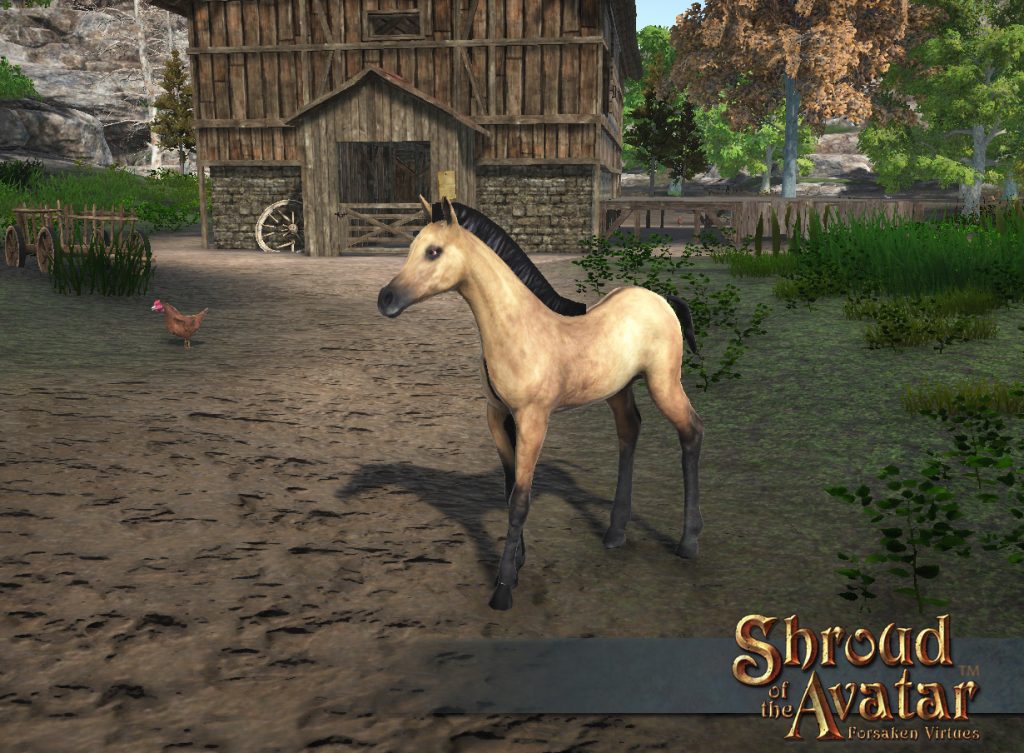 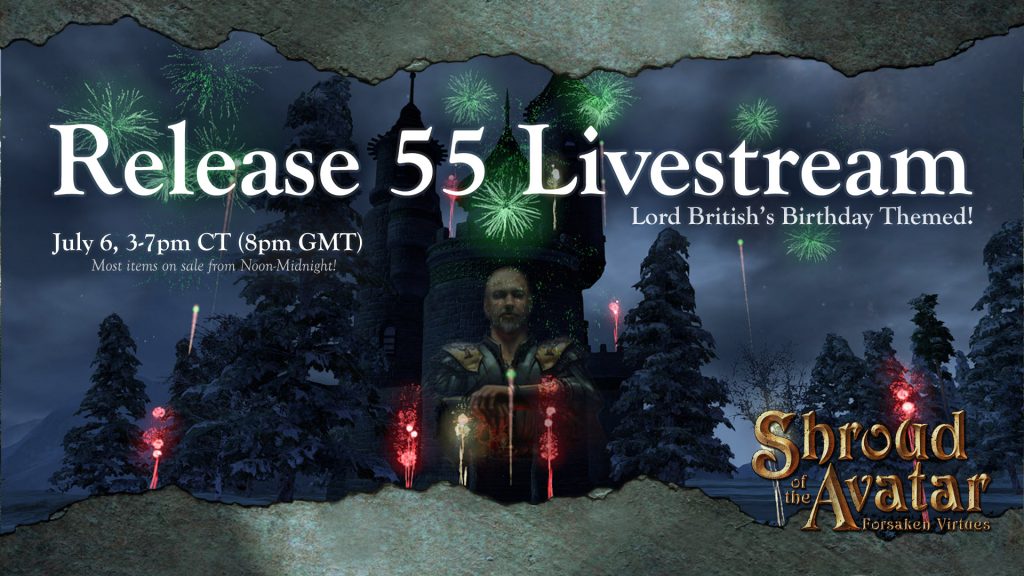 Our Monthly Livestream for Release 55 was a huge success and we achieved a bunch of our Stretch Goal Rewards! We had deep dives, world building tours, answered questions, and handed out tons of prizes! A heartfelt thank you from the entire Dev Team to all of you, our players, that continue to play and contribute to Shroud of the Avatar. This month’s livestream was yet another example of your amazing support and contributions.

The total for the Friday July 6 livestream as of Midnight CDT was an amazing:

As promised, Telethon Funding Stretch Goal Rewards will be rewarded to any backers that pledged a minimum of $5 from 12:00 PM CDT to Midnight July 6th. These rewards should show up on your account page within the next couple of weeks and will begin showing up in the game over the next few releases starting as soon as Release 58.

We had over 16 pages of questions left unanswered after the two R54 Livestreams! With assistance from the team we were able to get many of those questions answered and we posted them to the forums Thursday.

Here is the first part of the questions that we did not have time to get to during the R54 Livestreams (which are also now on youtube here and here). I tried my best to answer these (with help from the rest of the team) but some we just don’t have details yet to provide. I probably won’t have time to do any follow ups to these. The community did a great job assisting us this telethon to make sure we didn’t miss a single question.

Please note I deleted some duplicate questions and also deleted any questions that we answered with the Q2 post or with the release of R54 or that we answered in previous livestreams. Also note that we are generally going to stop answering questions about “when?” as those are answered by our quarterly schedule posts and any other answers are going to be either “No ETA” or “soon” or “will update with the next quarterly post”.

A new final thought: This tradition of answering almost every single question may not be sustainable in the near term with our current team size so please understand.

Lone-Wolf: Will it be possible to put repeatable quest in it own tab in the journal
STARR: Yes

Xkillerz: What about a sound when you find an artifact or effect around your avatar that makes everyone notice you got one?
STARR: Nice idea

Gandik: Can we get treasure maps to the fishing loot table?
STARR: Sure, once we add a treasure map system to the game (Episode 2).

Warrior B’Patrick: Some creatures we fight are not tamable, Unicorn, but it would be really nice to be able to tame a mushroom. Their confuse attack would be very nice.
Pawz: When are higher level tamable pets coming?
Pawz: Will Unicorns be tamable?
Pawz: Will we be getting new taming skills?
STARR: When we expand the taming system to include leveling pets and more pet skills these requests could become realities (Episode 2).

Anvar: can the brewed alcohol please have some buffs or purpose beyond just the rp of it.
STARR: Yes, that is the plan for magical brews

In celebration of Lord British’s birthday on July 4th, starting this weekend (June 22) and through the end of July, Avatars will earn double XP (Adventure & Production) when playing on the weekends!

Earlier this month Scott “Lum” Jennings posted our latest request for NPC submissions for Brittany Alleys. This is for Developer+ level backers who are eligible for the “Design an NPC” reward “Help create and name a character in the game”.

NOTE: We are extending the submissions for another release.

Thank you for your continuing support of Shroud of the Avatar! This month, we move from the jewel of the realm to its seamy underbelly – the district known as Brittany Alleys. The dark streets of the Alleys are full of mysteries and stories, perhaps one of which is yours…

Because of Brittany Alleys’ size, this will be the only area we are adding backer NPCs to for this release. If you do NOT want your backer NPC to be in Brittany Alleys for whatever reason, or if you absolutely have a character who should be in a given city not named Brittany, you should wait until we advertise for that city. We do plan on eventually populating every city in the game with unique NPCs!

Still with us? Great! Here’s what we need for Brittany Alleys:

If you’d like to have your namesake be a resident of Brittany Alleys, please respond via private message on this forum to Sannio using the following format:

Please specify in your submission that this NPC is for Brittany Alleys.

Thanks for your support, and keep a tight hold of your coinpurse when in the Alleys!

Brewing launched in Release 55 including new crops to grow, alcohol to brew, and casks to decorate with. To celebrate this new feature all Inns (which have a tavern space in the bottom floor), mugs, pipes, shopkeepers, and other tavern / brewing related items are on sale this weekend! 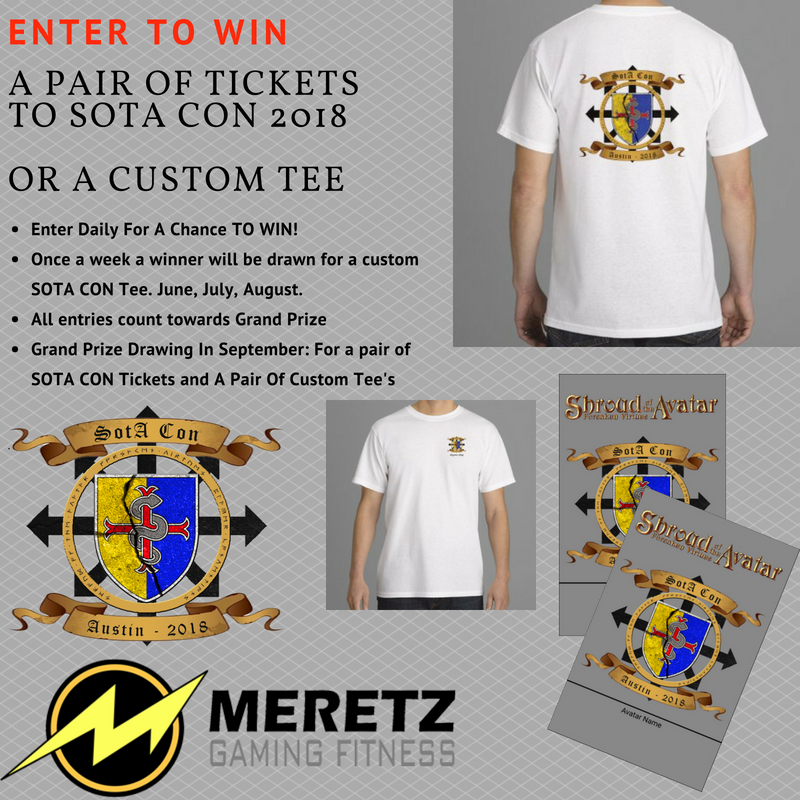 Enter daily to win! To enter, get the Meretz App:
https://www.meretz.com/promo/sotaconaustin

Project to Support – Portrait of Scottie for Shroud of the Avatar 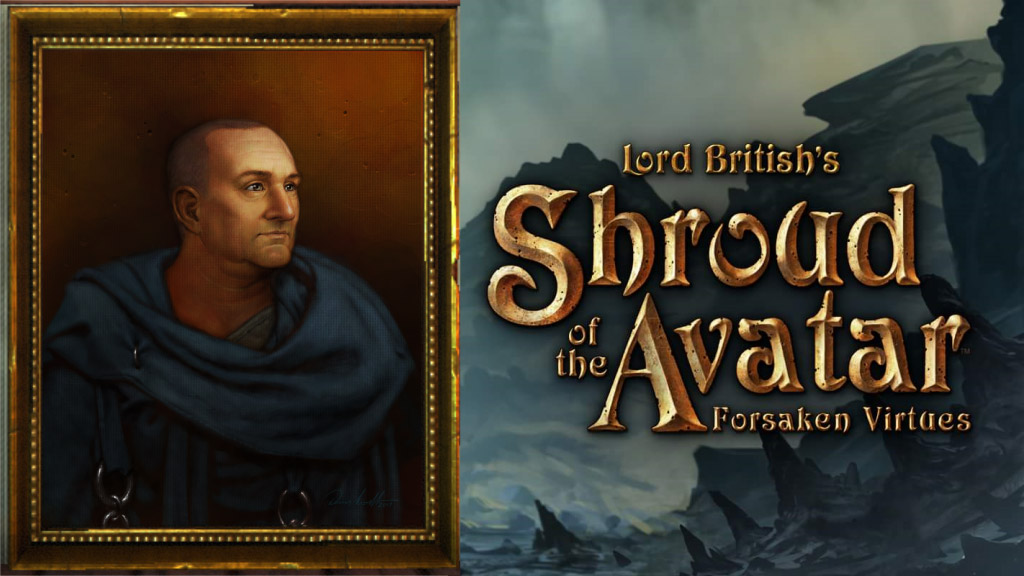 Scott “Scottie” Jones has long been a favorite among the backers of Shroud of the Avatar. A natural storyteller, he treats us to detailed narrations of scenes he’s designed, sings us Elvish songs, and creates poems about the scenes we experience as our stories unfold in New Britannia.

Portalarium, the creators of Shroud of the Avatar, allow us to import portraits created by significant artists, most notably Denis Loubet. Denis is well known for his work in gaming, cover artwork for the Ultima series, as well as working alongside Scottie creating the earliest concept art for the game that would become Shroud of the Avatar.

Some time ago, a call arose on the official forums to create an in-game portrait of Scottie to show our appreciation. I am answering that call and creating this Kickstarter project to fund an official portrait.

Scottie has given us permission. Denis has agreed to work it into his schedule. Portalarium has agreed to import the resulting portrait into the game as both a standard portrait and a Kickstarter exclusive version.

Please Join Us in honoring our friend Scottie in this way!

ty for your support sota players....

( Live ) shroud of the avatar forsaken virtues ( The Ke...