Only 6 Days Until Release 6!

The dev team is burning the midnight oil getting Release 6 ready for launch in just 6 short days! Next Wednesday you’ll receive the full Release 6 Instructions, but if you want a reminder of what is included in Release 6, check out Starr’s forum post about it.

We really hope you join us in playing Shroud of the Avatar Release 6! If you have not backed the game yet, you will need to register and login at www.shroudoftheavatar.com, select the “Pledge or Send Gift!” button in the right side-bar, and purchase a pledge at the $45 Adventurer level or above. For a limited time, you can get the Adventurer pledge for only $25 when combined with the Alienware Pledge Upgrade Coupon (see details below).

We are happy to announce that Shroud of the Avatar will be a featured game at the Plantronics booth at E3. We want the audio landscape of SotA to be as immersive as the visual landscape and Plantronics is a great partner for us to work with on achieving that goal. During our one year anniversary promotions you may have noticed that some of the prizes we were giving out were Plantronics headsets and at that time we hinted about more to come, like this, from that partnership. Richard Garriott, Starr Long, and Finn Staber will be representing the game at the Plantronics booth in the South Hall at booth 515 so if you are at the show come see us! 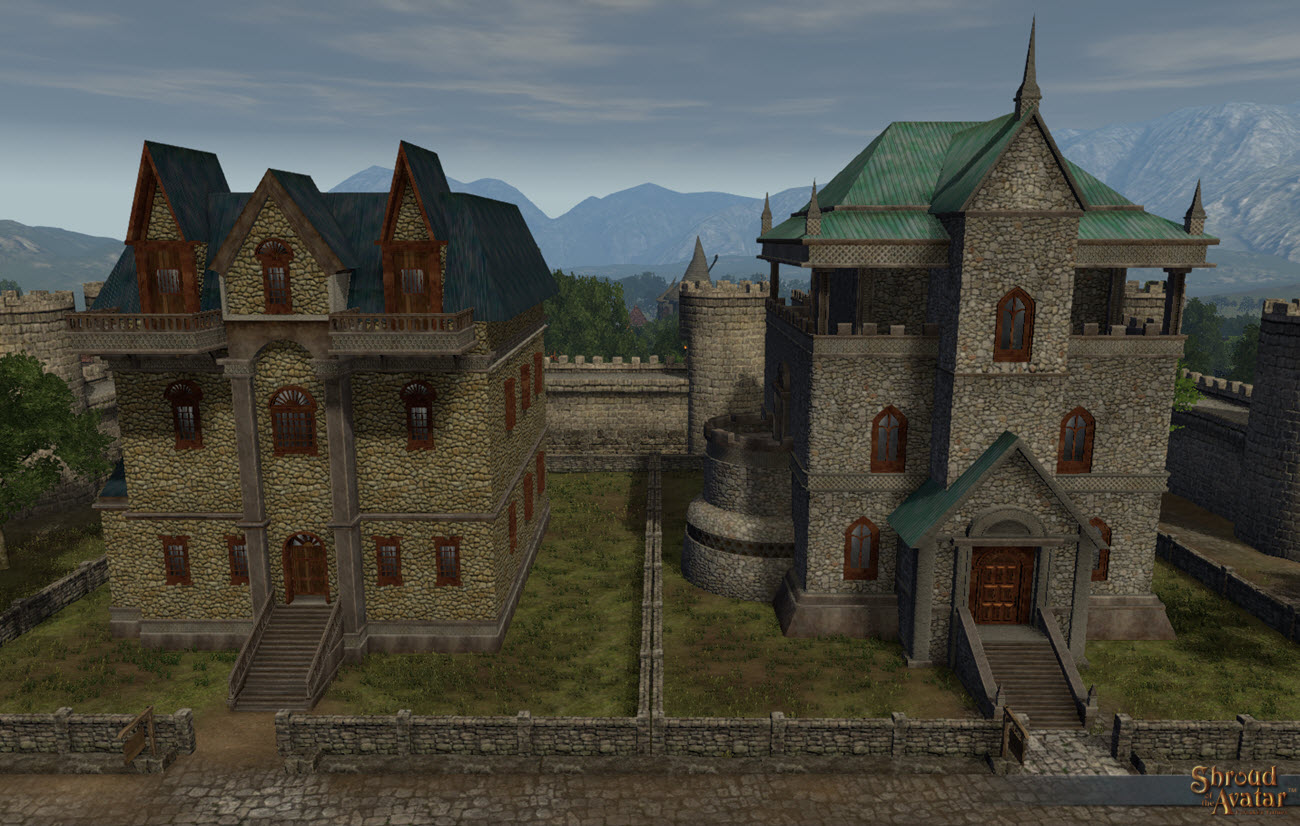 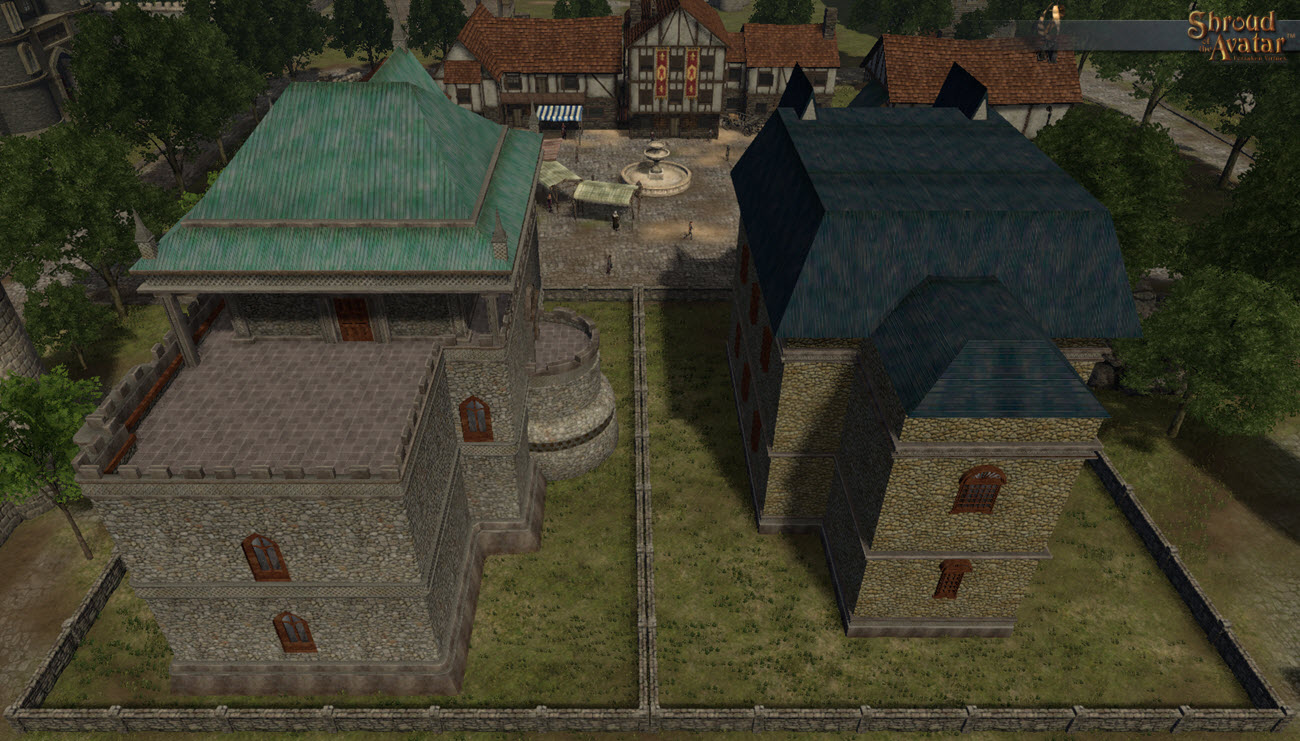 The revised Founder Lord Town Home (included in the Lord pledge tier) is comprised of 3 floors with 5 rooms (including a secret room), a second floor side deck, and a large rear deck on the third floor with a balcony wrapping around the front and sides of the house.

Based on feedback from our Lord backers, Bob Cooksey and Michael Hutchison did some major remodeling to the original Founder Lord Town Home, including: 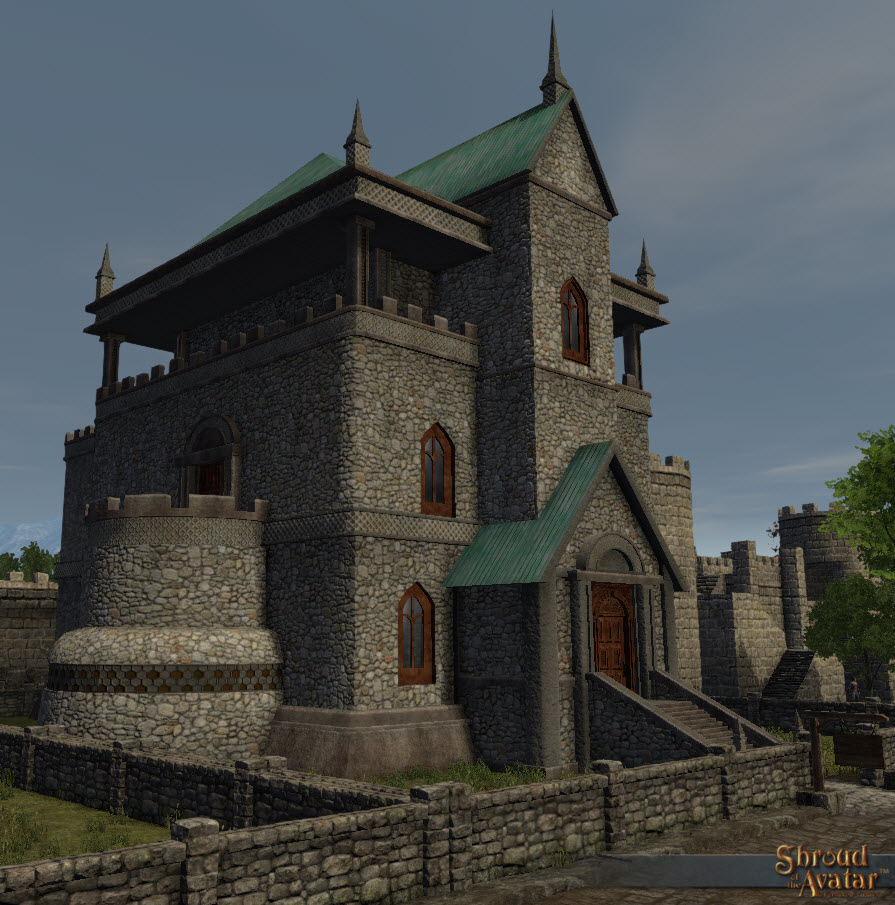 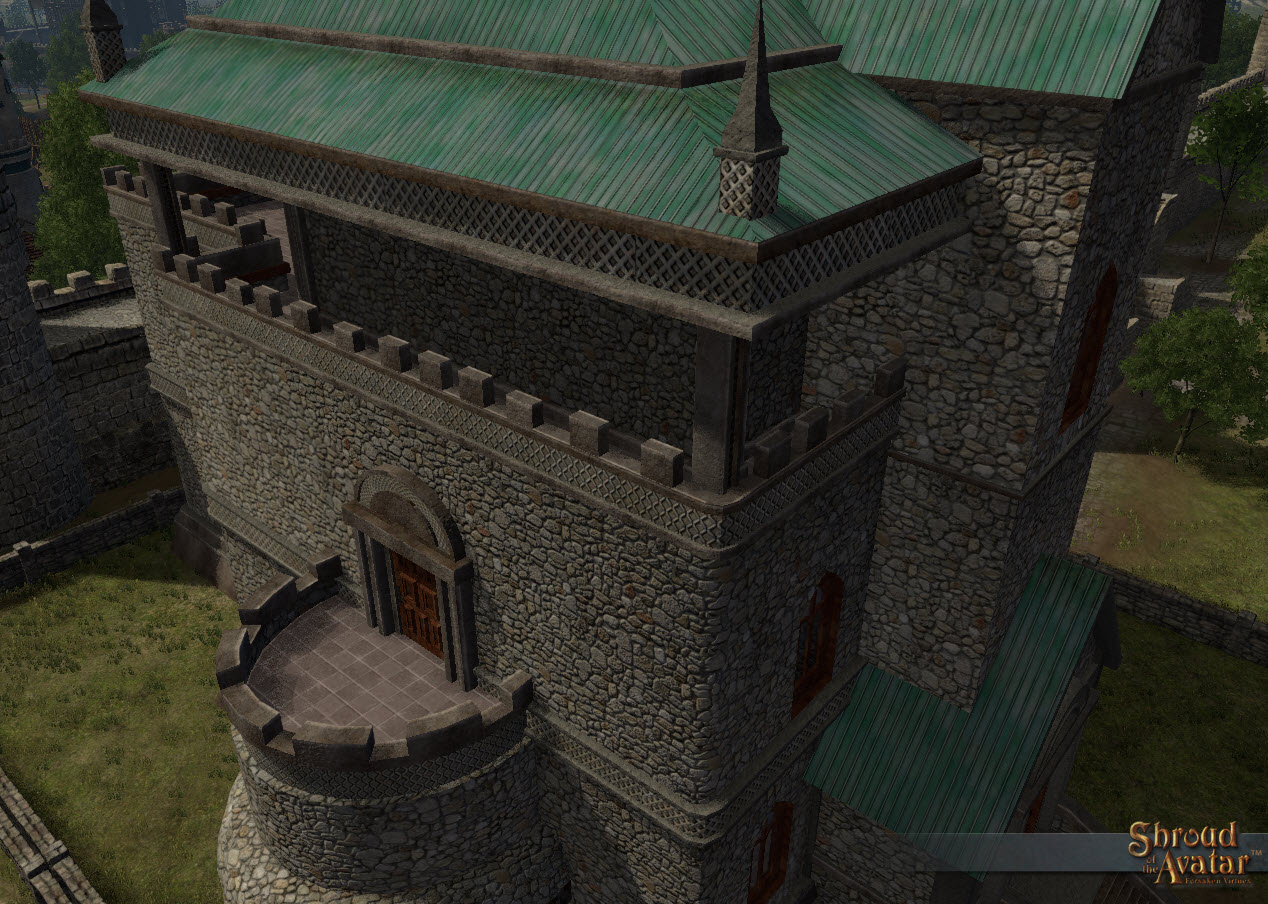 The Benefactor Lord Town Home (included in the Lord pledge tier) is comprised of 3 floors with 7 rooms (including a secret room), and two front-facing decks on the third floor. 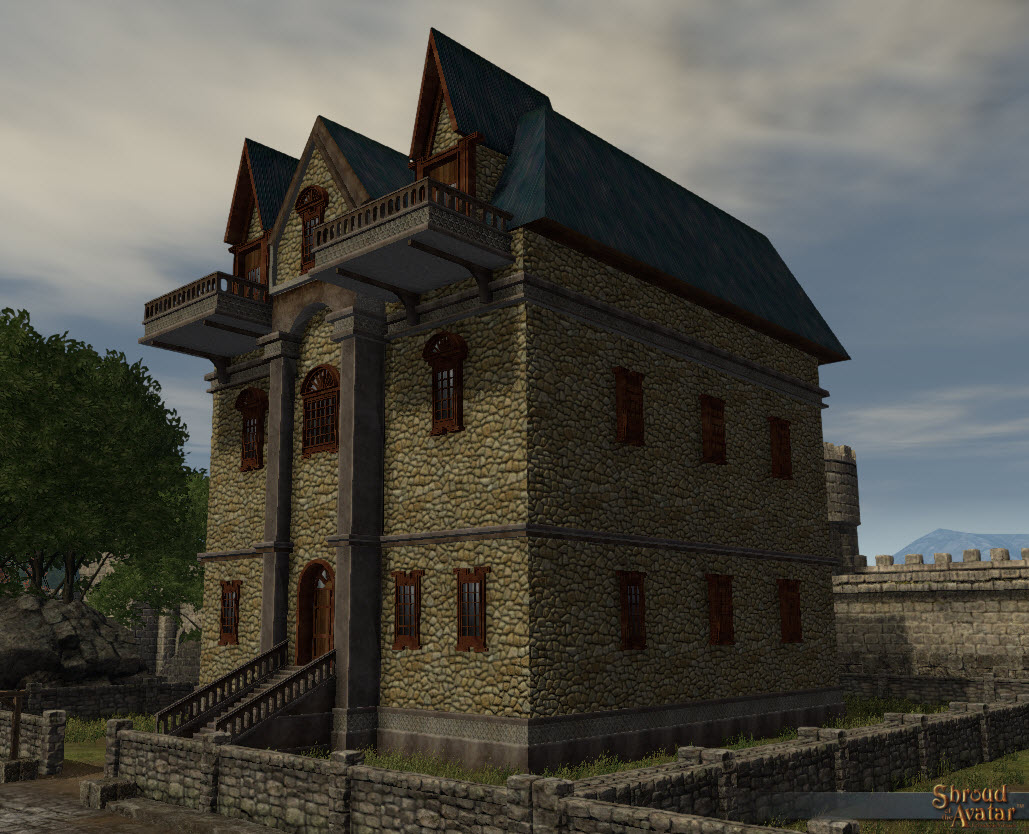 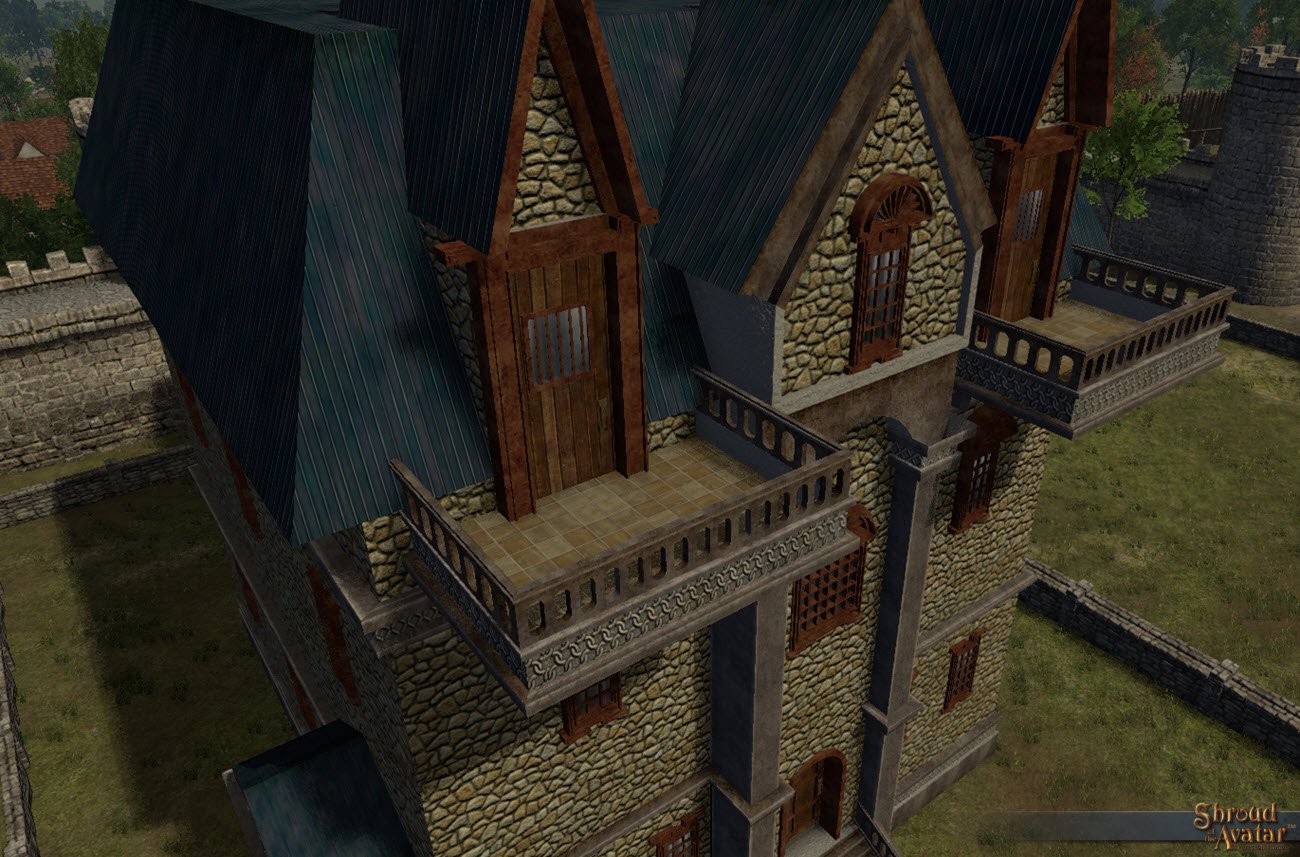 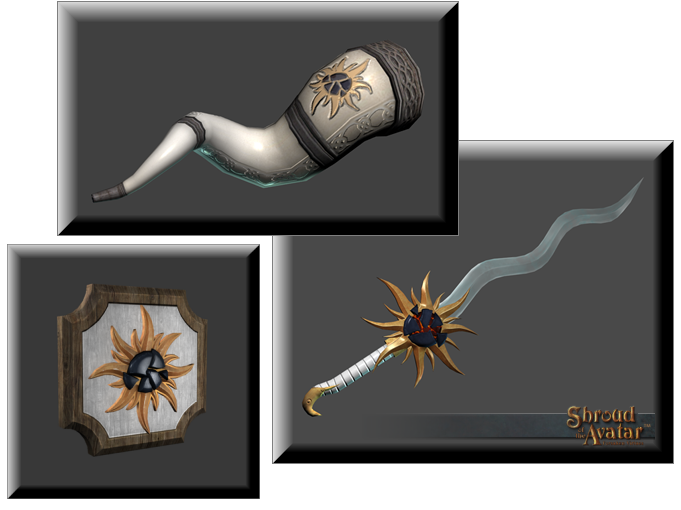 Join us in welcoming our newest Dev Team member, Alyssa Reuter, bringing our total team size to thirty-nine. As our team’s first technical artist, Alyssa will be contributing to SotA’s VFX and other visual areas of the game. Here’s her bio from the Dev Team page: 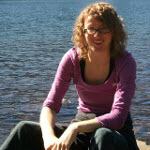 Alyssa Reuter first decided that she wanted to be a game developer after exploring the ages of Myst when she was seven years old. In 2010, she was part of the first graduating class of Carnegie Mellon University’s integrated Computer Science and Arts program, where she focused on digital and interactive media. While at school, she also completed internships at EA (Command & Conquer 4) and SilverTree Media (Disney’s Pixie Hollow Online).

After graduating, Alyssa took a six month break from games to study fashion design at Parson’s New School of Design in New York City, and then decided to move to Austin for the warmer weather. She started at Edge of Reality in early 2011, at first working as a VFX artist on The Sims 3: Pets and then as a technical artist / engineer on Loadout, Mass Effect Compilation (PS3), and most recently, Transformers: Rise of the Dark Spark.

She is now happy to be on the Shroud of the Avatar team, helping to create a visually rich, immersive interactive world with her unique blend of technical and artistic abilities! 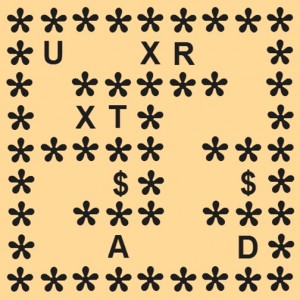 We received 21 entries by yesterday’s deadline for Richard Garriott’s DND #1 Contest! Richard will evaluate all the entries and winners will be announced in an upcoming Update of the Avatar!

First in our line of Barn homes is this rustic, 2-story, 4-room, village home, now available in the Add-On Store (you may have seen this barn in Owl’s Head): 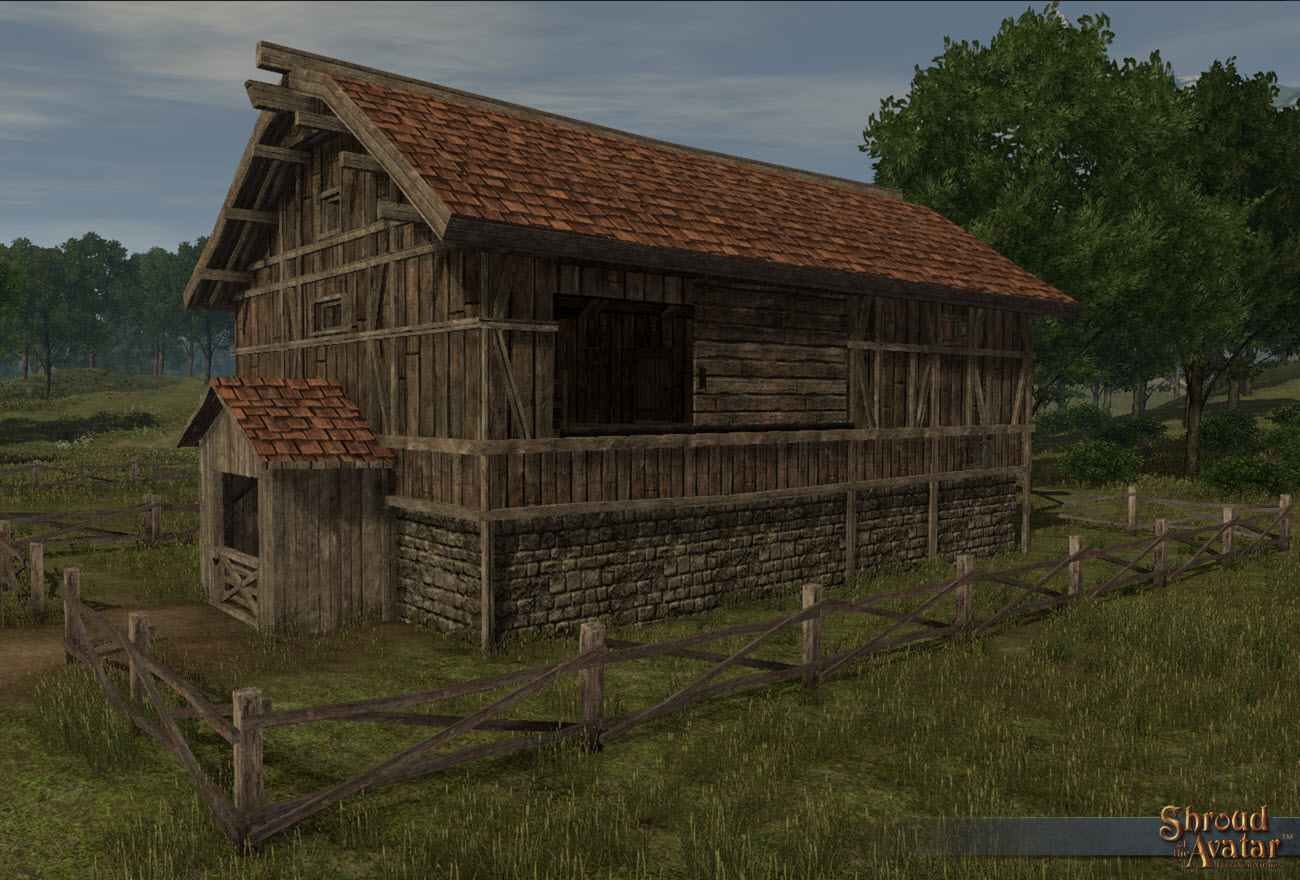 Get Your Barn 2-Story Village Home Now for 50% off!

Upcoming Duke and Lord of the Manor Events

On November 14, 2014, in Austin, TX, Portalarium is hosting a VIP Design Roundtable and Portalarium Studio Tour as part of the basic rewards for the Duke pledge tier (and above). We will begin the morning of November 14th at the Portalarium studios for a tour and roundtable design meeting with Richard Garriott. Later that afternoon, the VIPs will attend breakout design sessions with the development team.

On the following two days, Saturday and Sunday, November 15 & 16, our guests are encouraged to check out Rustic Dragon’s HoBLotH II: Legends of the Hearth (see details below).

HoBLotH II: Legends of the Hearth

On November 16th and 17th 2013, Rustic Dragon’s Hearth of Britannia opened its Indianapolis, IN doors to thirty Ultima, Shroud of the Avatar, and Lord British fans across the country for the Hearth of Britannia Lords of the Hearth (HoBLotH), a 1:1 recreation of the meal served just a month prior at Britannia Manor IV. There was Britannian food, plenty of libations, celebrity guests, themed activities, and a host of garbed attendees.

One year later, Rustic will once again assemble a semi-exclusive group of fans for HoBLotH II: Legends of the Hearth. While the details won’t starting coming into public focus until July, the date and location are set: November 15th and 16th at Castleton, Lord British’s own Medieval village in Austin, TX. While many things will be different, much will remain the same: there will still be delicious food, plenty of libations, celebrity guests, and intense participation required to complete the themed activities.

Keep thine eyes peeled toward the Hearth of Britannia’s website. In July, details will surface. RSVP and attendee vetting will also open at that time. Until then, thou canst peruse the original HoBLotH Event page to fuel thy speculation. 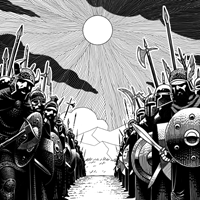 “Are you sure this is going to work?” Syenna whispered into the air between them.

“No,” Aren answered in hushed tones into that same air. “But who is sure of anything anymore.”

Syenna sat upright, her back stiff as the horse beneath her walked down the tunnel between the two sets of gates. She felt vulnerable without her armor. She especially felt the absence of her sword and scabbard. It had hung so long at her side that it had almost become a part of her. Now it lay abandoned among the pile of weapons left in the center of the city’s marketplace along with every other weapon in the town.

She turned slight in her saddle to look at Aren. She wondered for a moment why it was that his strange weapon would be the only one carried out of this place by anyone whom she was willing to call a friend. Everything had been arranged according to Aren’s will, but now, faced with the helpless reality before her, powerless before their enemies on open ground, she wondered if Aren had some private game that he was playing with all of their lives.

Aren rode on the back of his own horse beside her. He wore what remained of his Obsidian armor; the breast and back plates and one of the spike-adorned shoulder guards. He even looks like one of them, Syenna thought.

Behind them were arrayed all of the citizens of Opalis, prepared to follow them through the gates and, they hoped, to longer life.

“You’re sure about the Titans?” Syenna asked and not for the first time.

“Grannus has remained to maintain the shield,” Aren answered. “You can see that for yourself.”

“Each of them has sent word,” Aren reassured her once more. “Everything is as ready as it can be made.”

“Is that ready enough?” she asked.

“Well, we are about to find out,” Aren said as their horses walked through the outer gate of the city… 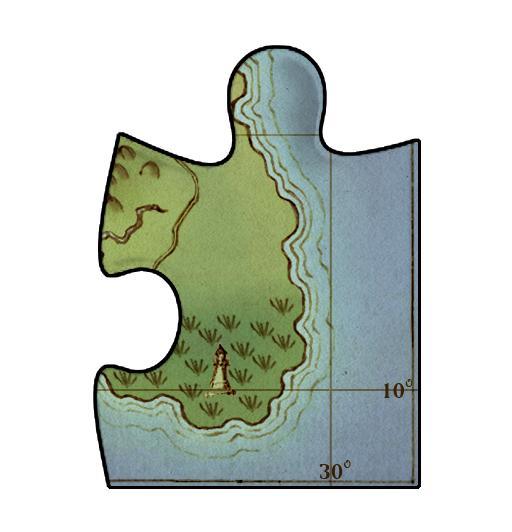 An early and short stream before my Rock Choirs Yuletide ...