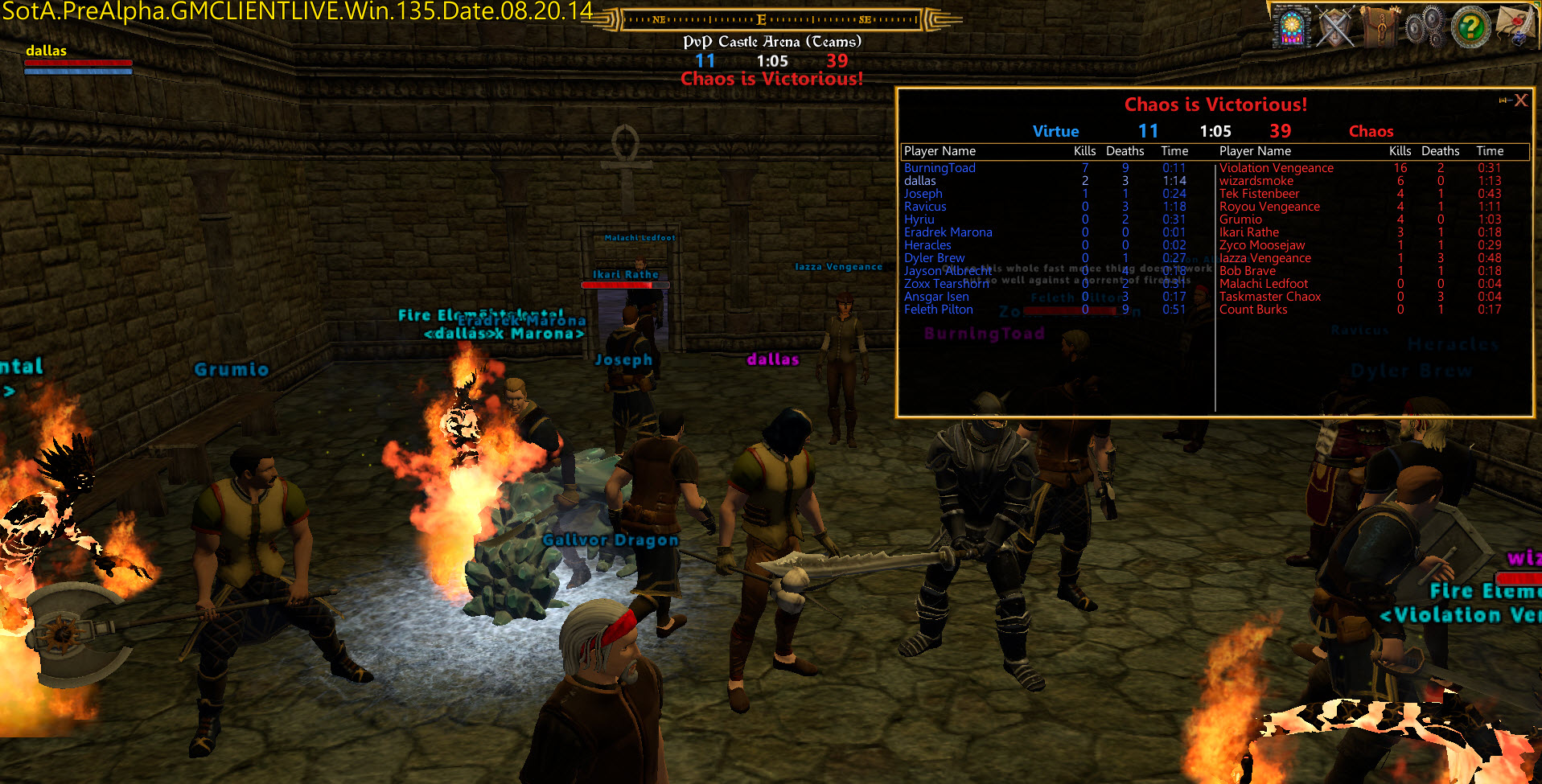 What is it about Chaos that attracts the best PvPers?

Release 9 successfully launched yesterday, August 21st, with thousands of backers downloading, patching, logging in, and checking out the new changes! Lots of new content to check out, including:

Enter the PvP Team Arena through the blue Rift near the starting point in Braemar, guarded by the satyr, Dread Lord Stephen 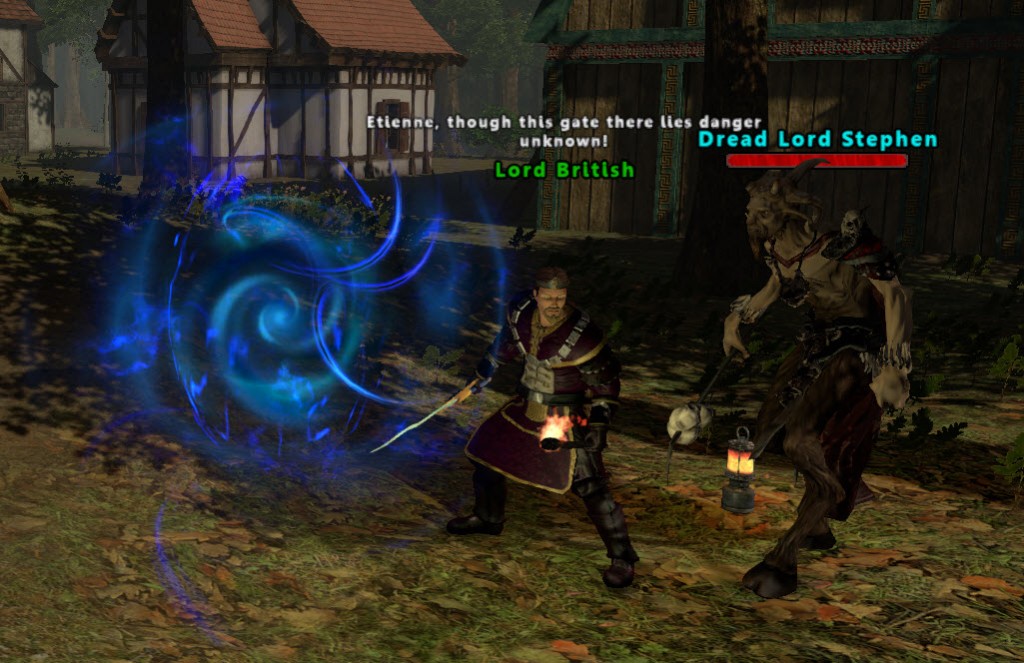 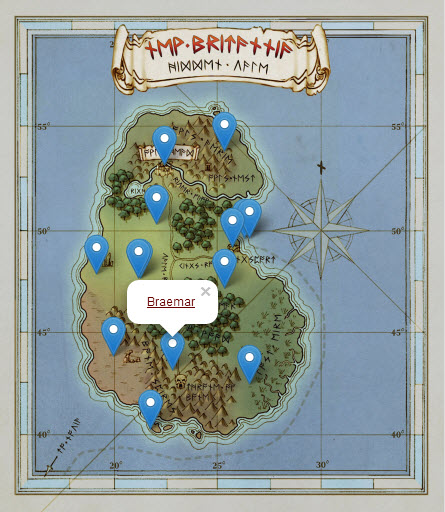 We need all your help with testing the new patches, putting more stress on our multiplayer servers, and testing the new game content, so please join us in playing Release 9!

If you have not backed the game yet, you will need to register and login at www.shroudoftheavatar.com, select the “Pledge or Send Gift!” button in the right side-bar, and purchase a pledge at the $45 Adventurer level or above. For a limited time, you can get the Adventurer pledge for only $25 with the Alienware Pledge Upgrade Coupon (see details below).

Our amazing community has another great lineup of in-game events planned for Release 9. If you missed out on these player events during the previous Releases, we highly recommend you check some of them out this weekend. Here is the latest schedule of player events from the Avatar’s Circle Community Events calendar (http://avatarscircle.com/community-events/):

We are building PaxLair (“Peace Place”) Player Town in Release 9 like we did in R8, R7, R6, and R5. We are planning to build in Valemark again.

PaxLair is an OPEN community for people, guilds, establishments, and wanderers. PaxLair will be a metropolis sized Player Owned Town when SotA is released to the public. We are building PaxLair using our experiences with PaxLair in Old Britannia (Ultima Online) since 1998 (and still running). We are also using new ideas and meeting new people. These pre-Alpha releases help us get to know people, try out ideas, see what works and does not work, and have fun.

This thread is for our journal of activities/progress, questions and answers, and interaction with anyone and everyone. We want to meet our neighbors, hold some events, wander on adventures, and get to know each other in this new realm.

So please look for us. Most existing PaxLair citizens will have a last name of Pax or PaxLair, but in the final release, we will probably not have such last names.

Remember, we are building a town… not a guild. Many people and guilds can be in PaxLair.

Location: We are building PaxLair in Valemark again. We hope many will join us! 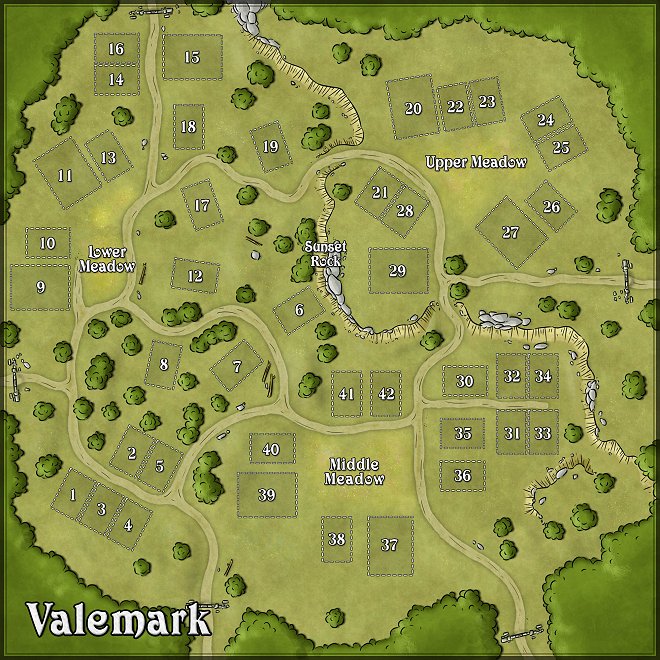 Descriptions of Events on the Schedule:
PaxLair Gathering – A simple Meet and Greet event to see and learn more about PaxLair and to meet other people too.

PaxLair Play!! “Where there is a Will…” (with added Act) – Everyone is welcome.

Members of Celtic Holdfast, PaxLair, and Vengeance are teaming up for another Welcome Quest in Release 9!

[A forum post by Duke Gréagóir of Celtic Holdfast]

This time around you choose your adventure. Will it be Knowledge? Will it be High Stakes Adventure? Your choice.

Saturday, August 23rd at 3:00pm CST meet at The Bear Tavern in Beran’s Reach and seek out the mysterious one to start your quest. Your choice will bring you to PaxLair (in Valemark), Vengeance (in The Brave Coast), or Dara Brae the Celtic Holdfast (in Northshire). Your choice , your quest, your adventure.

If you want to get a jump start earlier just seek out Winfield of PaxLair, Duke Violation of Vengeance, or Duke Greagoir of Dara Brae for a broken torch and bring that with you to The Bear Tavern on Saturday, August 23rd at 3:00pm CST to get your first reward sooner.

Note: Location of The Bear Tavern in R9 – Go to the island of Port Mirren, which is accessible via one of the teleport boats docked in Kingsport. Find the back exit boat in Port Mirren, cross the bridge, go left, and it’s the first Duke’s Castle sitting on a city water lot on the left 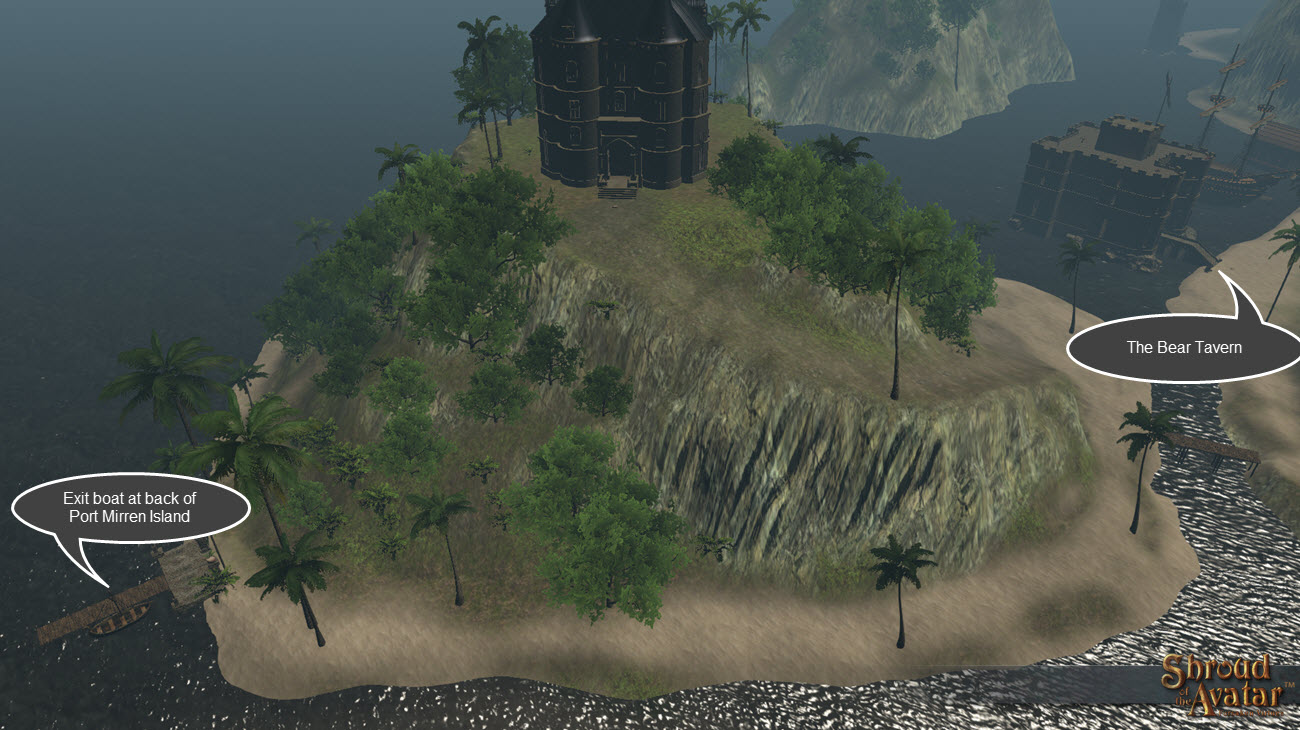 Once again, there are PvP tournaments being hosted by The Order of Vengeance and The Bear Tavern!

The Order of Vengeance PvP Tournaments

The Order of Vengeance Guild is hosting multiple tournaments that started on Thursday, August 21st and are continuing through the weekend. The tournaments are being held again on The Brave Coast island (which can be reached from one of the teleport boats in Kingsport). Here’s an excerpt from Violation Vengeance’s forum thread: 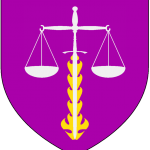 I wanted to encourage all the PvPers to find us in R9 as we will be expanding! We will have a “Vengeance” location and a “Malus” location… the Malus location will not have any “Order of Vengeance Guards” (like the boat was in R8… safe spot for spectators).

This announcement is on the tail of one of our members being nice enough to pick up a second town that we will run a LOT lighter protection detail in and encourage a bit more… chaos.

Other activities we will be participating in with the community:

If you’re looking for something a little different from the PvP Castle Arena in Braemar, or the open PvP areas scattered across New Britannia, then you really must check out the PvP Maze Arena that players constructed in Vengeance (at the very top of The Brave Coast Island): 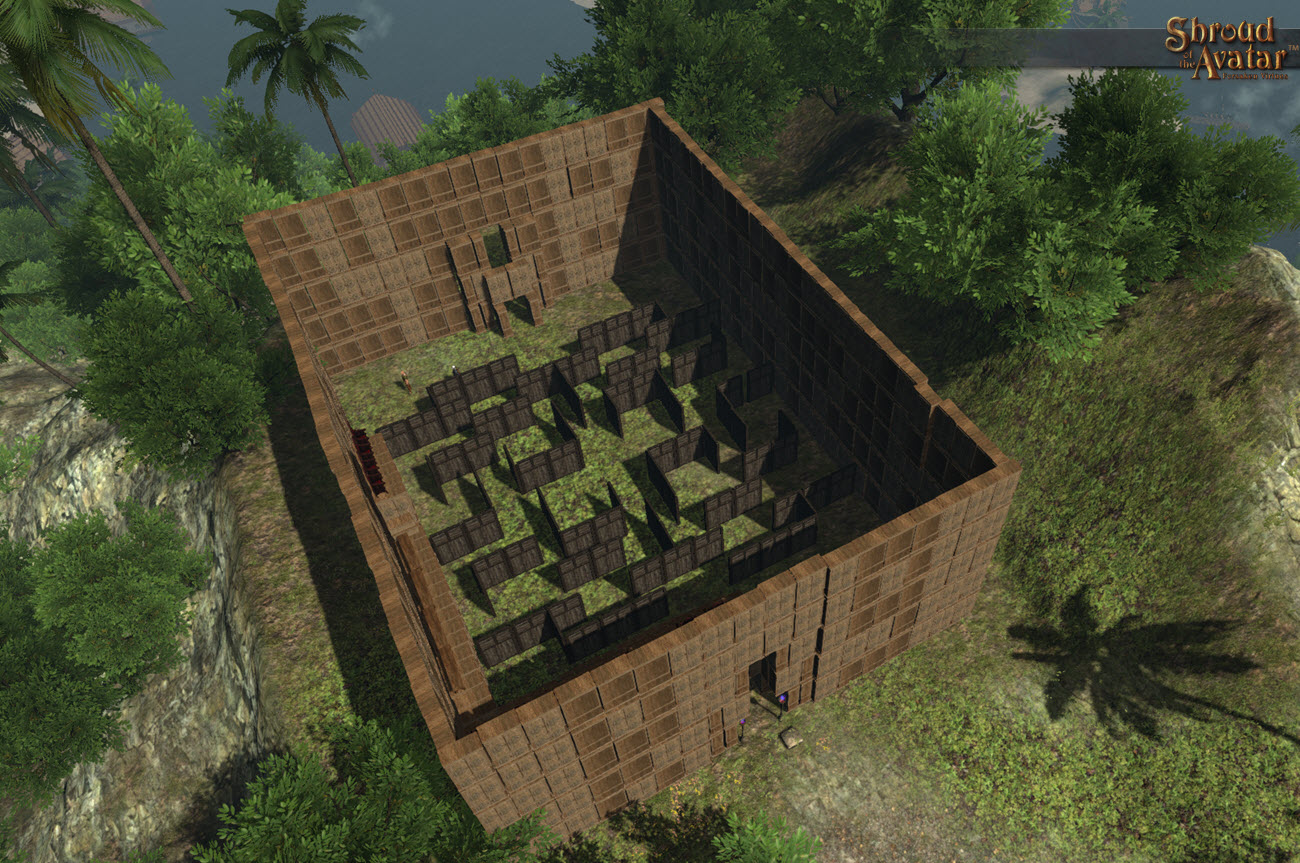 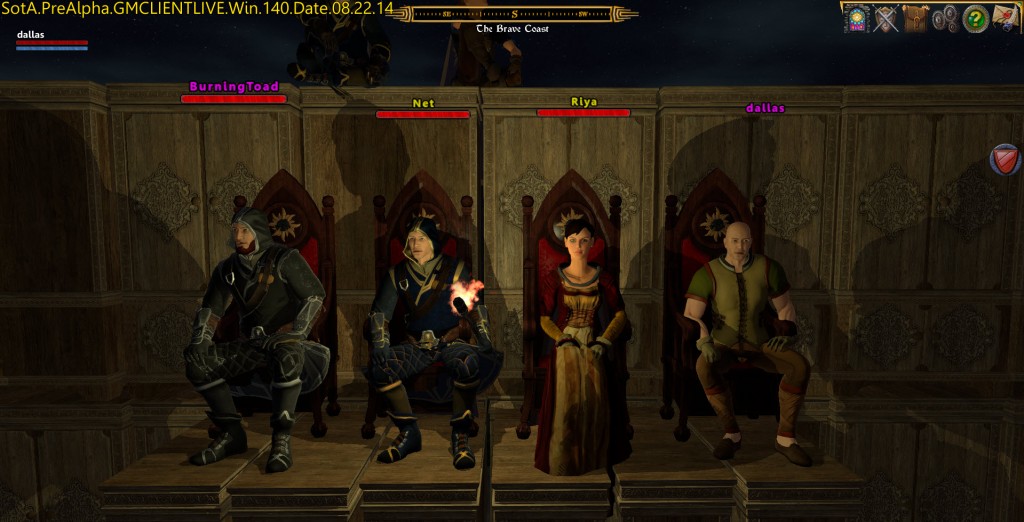 The Bear Tavern is hosting a major 2v2 PvP tournament on Saturday, August 23, at 12:00 pm CST, at the PvP Castle Arena. You can see the Tournament Bracket here, or go here to Signup. Check out their forum post for full details! 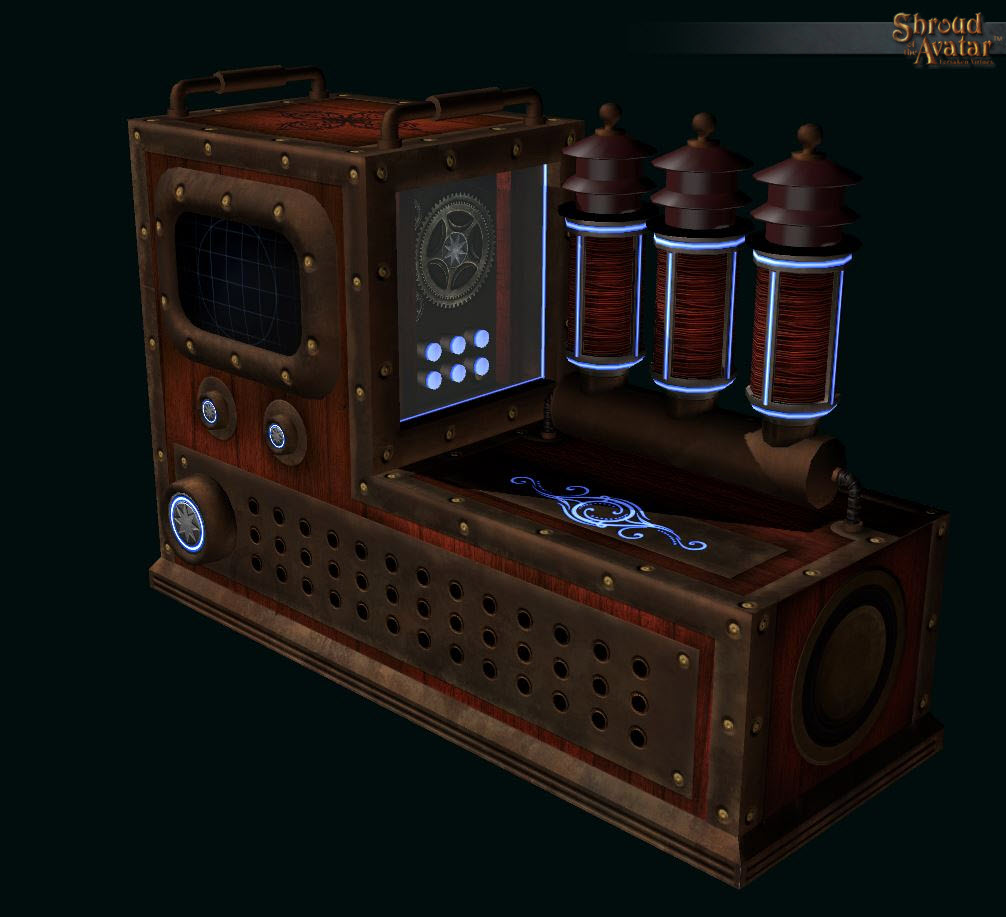 Several months ago, community member Duke Violation posted on the Avatar’s Circle forums about a request from Lord British for a crowdsourced in-game wireless device that plays streamed audio (part of the Developer Pledge rewards). Community member Joviex learned of this and approached fellow community member Bubonic about working on the project. Joviex programmed the features and Bubonic created the art, and the results are fantastic. Bubonic recently posted about the project in the SotA public forums. Here’s an excerpt: 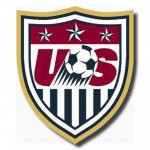 It is with great pleasure that @Joviex and I are able to present our mutual creation, the Aether Vibration Amplifier!

A few weeks ago…Joviex approached me about a project request he found on a fansite: an ingame radio, which would stream shoutcast, connect to Avatar Radio, and other stuff, requested by Lord British himself. He had noticed that no one was currently working on this, so he suggested we give it a shot!

I’m particularly proud of what we have created here. Joviex has crafted some serious code magic: not only does the radio connect ingame as requested, but the main display screen even displays an animated waveform of the streamed audio! (I was very impressed, in case you can’t tell.)

Here’s the original request, copied and pasted from the Sota fan site: 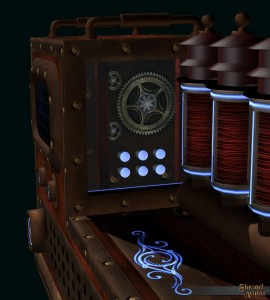 1. The radio remembers the last stream you connected to via a config file.
2. It supports custom preset stations, as well as coming with a few already connected, including Avatar Radio (which can be restored with the default button).
3. It doesn’t autoplay, it waits for input from the user.
4. It has an autotune feature.
5. It looks kind of awesome. [editors note: we agree!]

The name itself, the Aether Vibration Amplifier, is from Lord British himself. There is also already a crafting recipe! 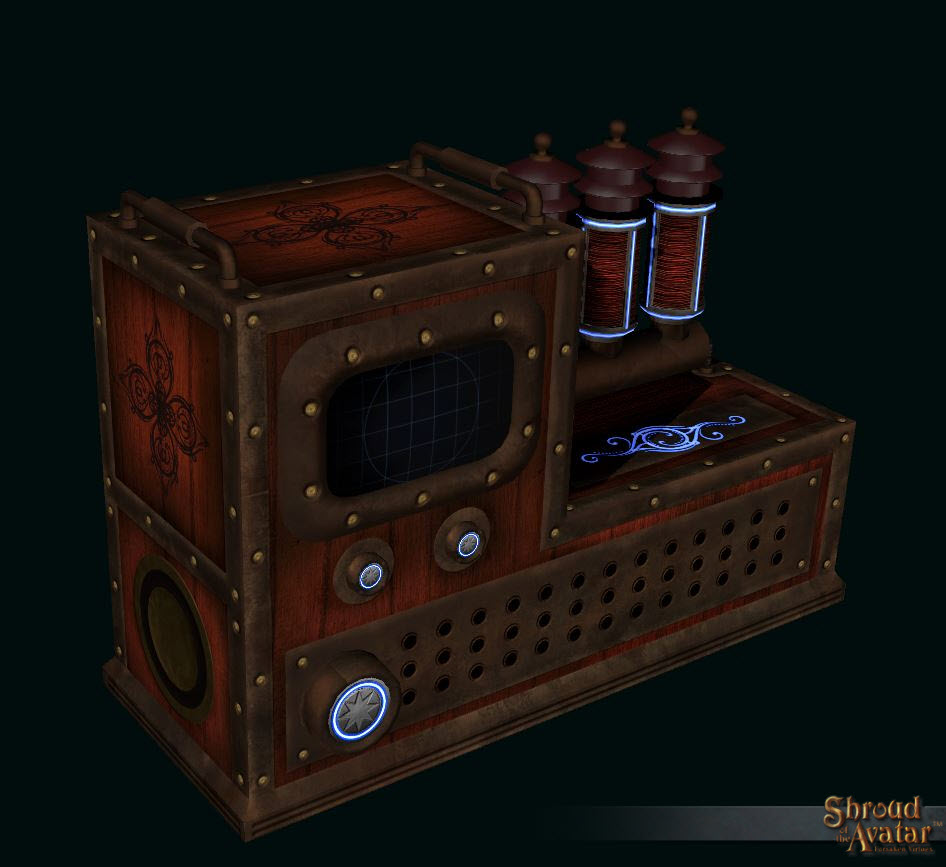 The Island of Choices

For far too long, you have been trapped on Earth. You know your destiny lies in a realm called New Britannia! As you search the net for clues of this place and how to get there, you discover some who claim they have found gateways, “Lunar Rifts” some have called them. A few claim that these “rifts have pulled their discoverers, at least their “astral projection”, to a floating island, lost in a strange void. A void where the sky is filled with a wrecked moon, that encircles the strange island. That strange and wondrous things await visitors here… but none have been able to venture beyond. This becomes your new obsession. Perhaps this is the gateway you seek! 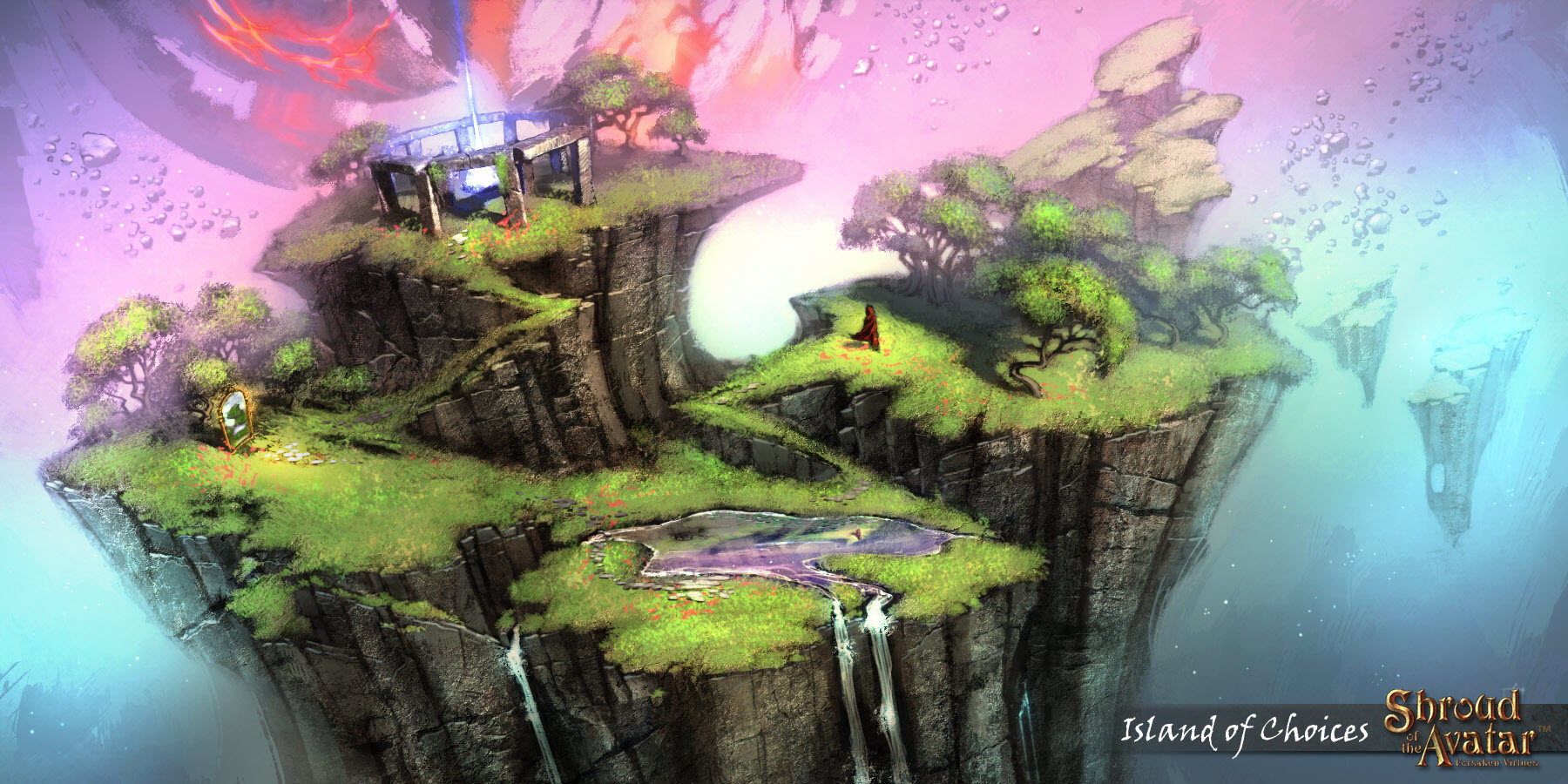 We have a very full schedule next week at Dragoncon, including:

Other upcoming events include:

Shroud of the Avatar | Chainsword Paladin | I am ill, and...